One day in Helsinki and Bitcoin-related things

We’ve been busy, but we now felt that it was time to update what we’ve been doing after our stay  in Tallinn and our week 20 ultrasound there. First we spent one day in Helsinki. It was the cheapest option for us when we wanted to travel from Tallinn to Sweden. Ulrika has never set her foot in this neighboring country, and Pontus has never been to Helsinki so we took the opportunity to see the Finnish capital on foot. We calculated that we walked about 15 km this day, so we managed to see a big part of Helsinki. Then there were Bitcoin and freedom-minded meetings on our Sweden agenda, and to meet family and friends. 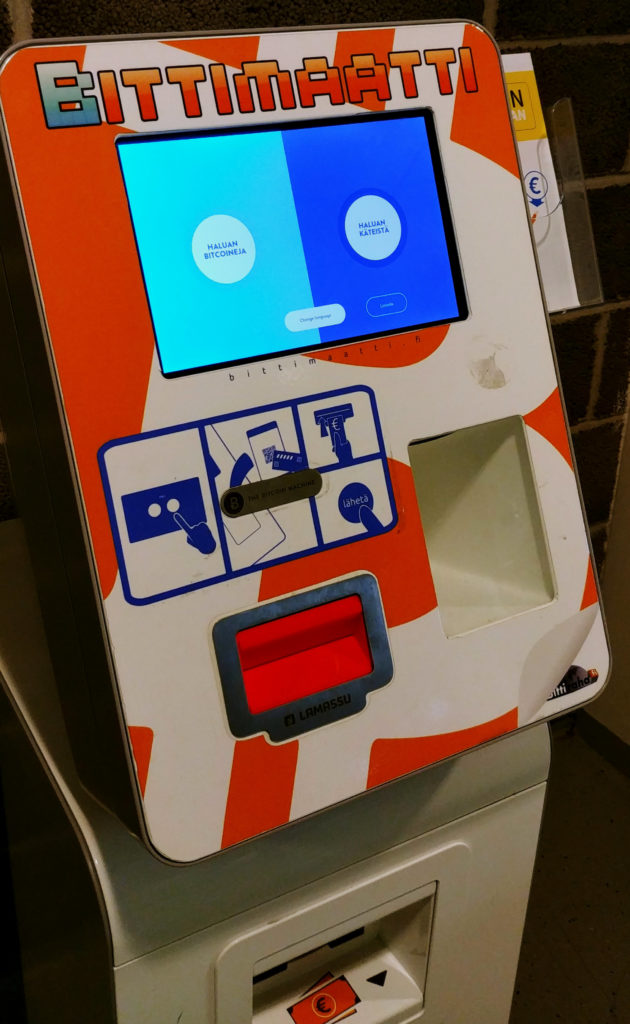 A bitcoin ATM greeted us when we arrived to Helsinki, so it was easy for us to get the local currency (Euro) here in Finland.  0 confirmations, no need to sign in and give out personal information and we were ready to spend a day in Helsinki. The ATM can be found in the ferry terminal at Västra Hamnen and you can change the language so you don’t have to know Finnish to use it. 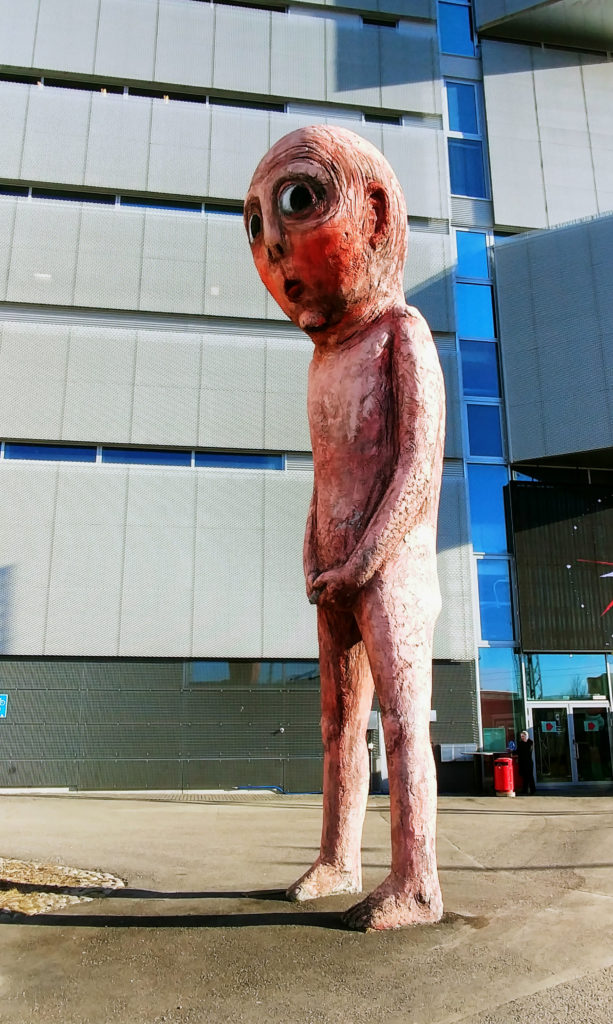 The second thing that greeted us in Helsinki was the Bad Bad Boy, the 8.5 meters tall urinating statue. 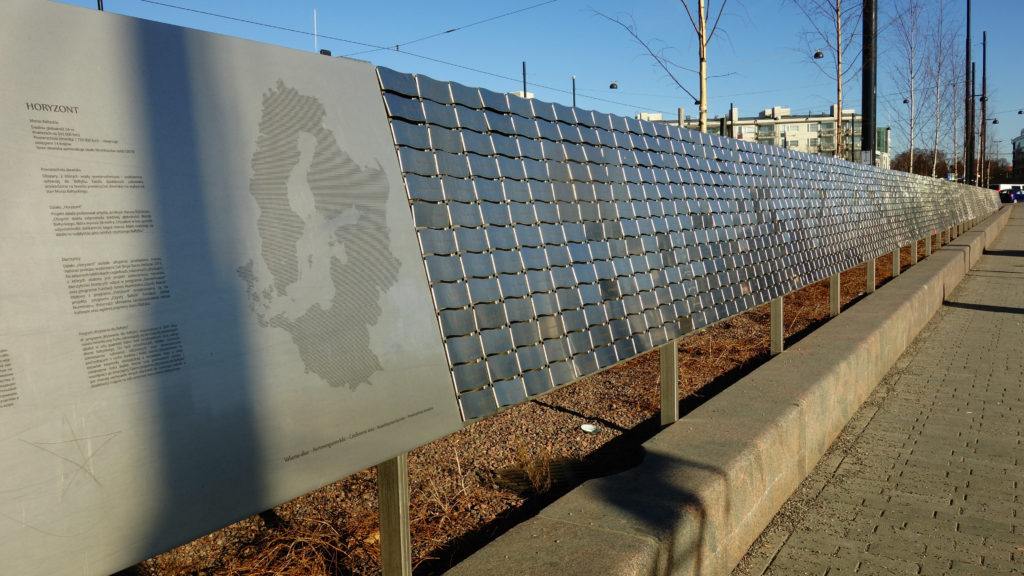 And a visualization of the mean depth of the Baltic Sea – only 55 meters. 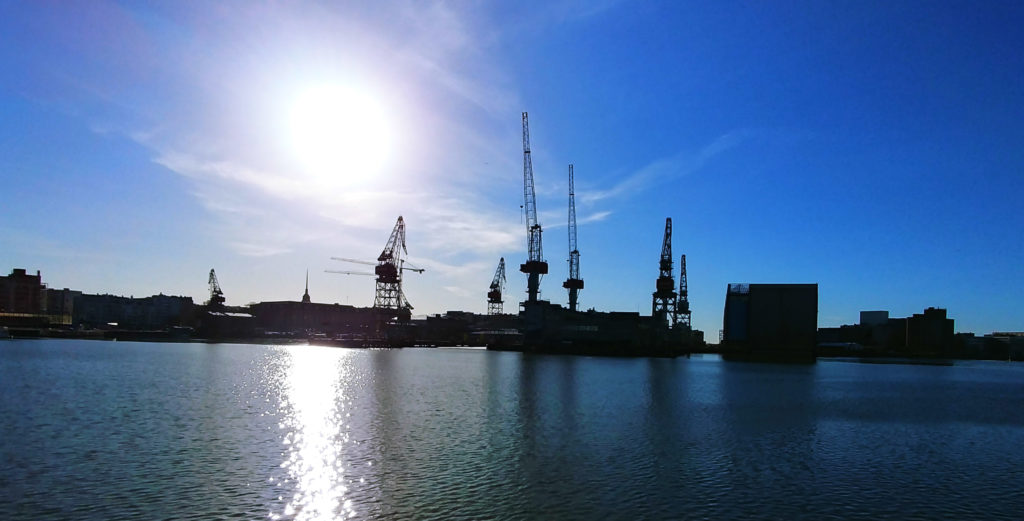 We had taken the morning ferry from Tallinn so the sun was still rising when we came to Helsinki. Ulrika thinks that these sorts of cranes look like dinosaurs. 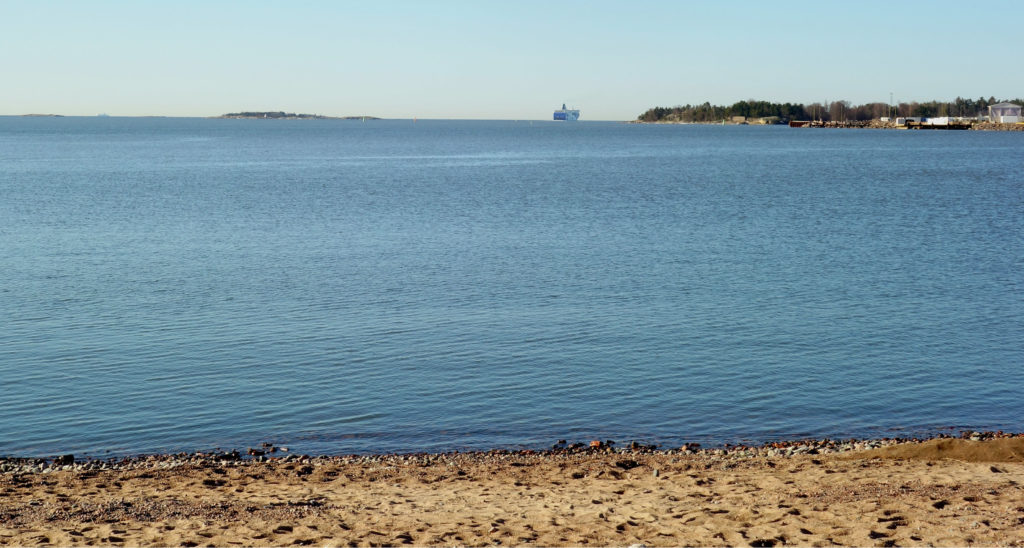 We found a beach, but it was to cold to jump in. 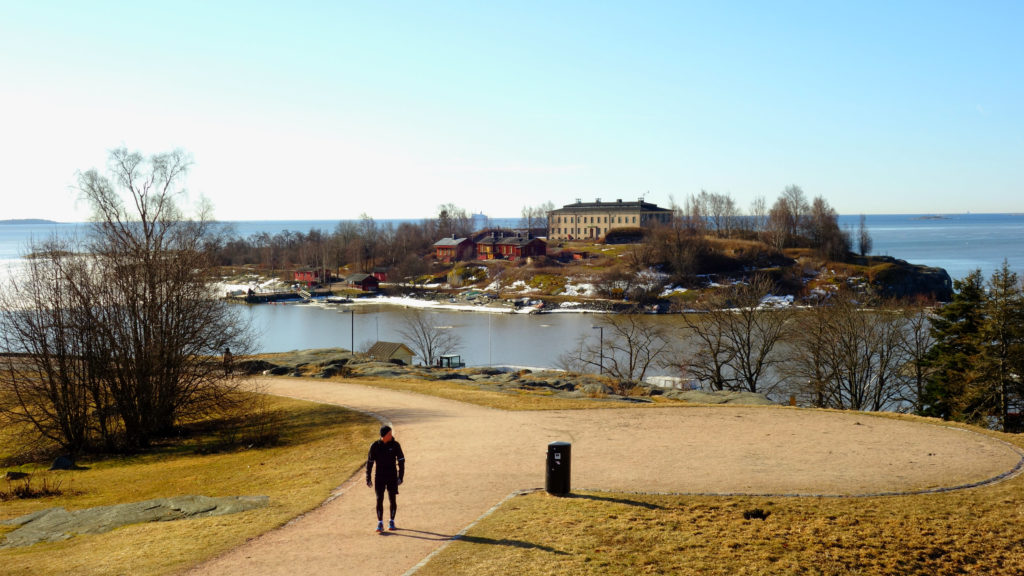 We took a walk through Kaivopuisto park and found a small hill from where we got a nice view over a few of the islands just outside of Helsinki. 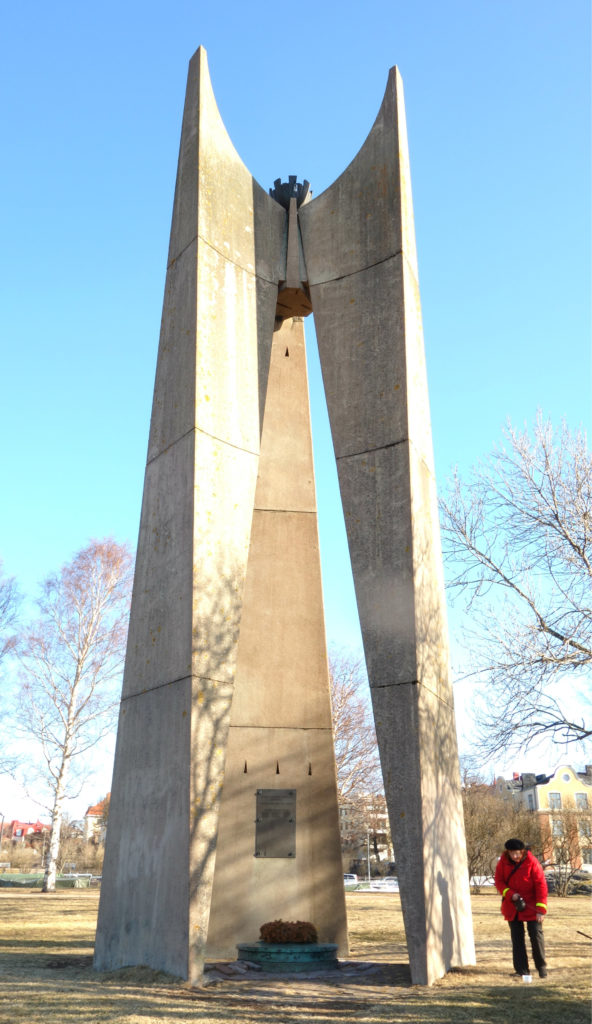 There we also found a memorial for all seafarers and the deceased at sea. 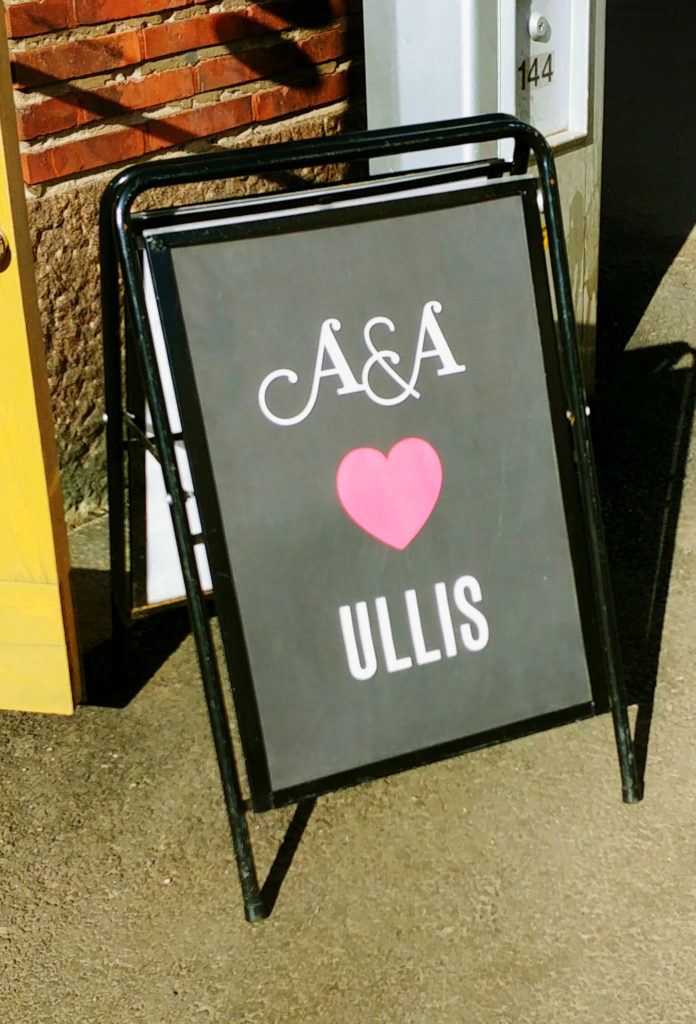 One district in Helsinki is called Ulrikasborg, which translates to Ulrika’s castle in English, so we had to go there. Ullis is a nickname Ulrika and this district have in common. 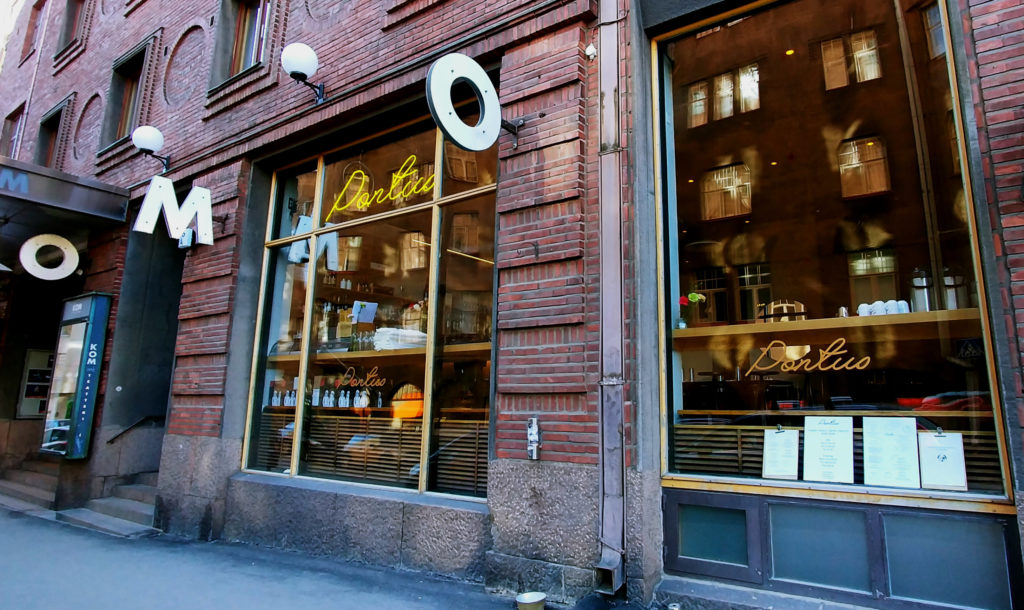 It was funny that we found Pontus café in Ulrikasborg. 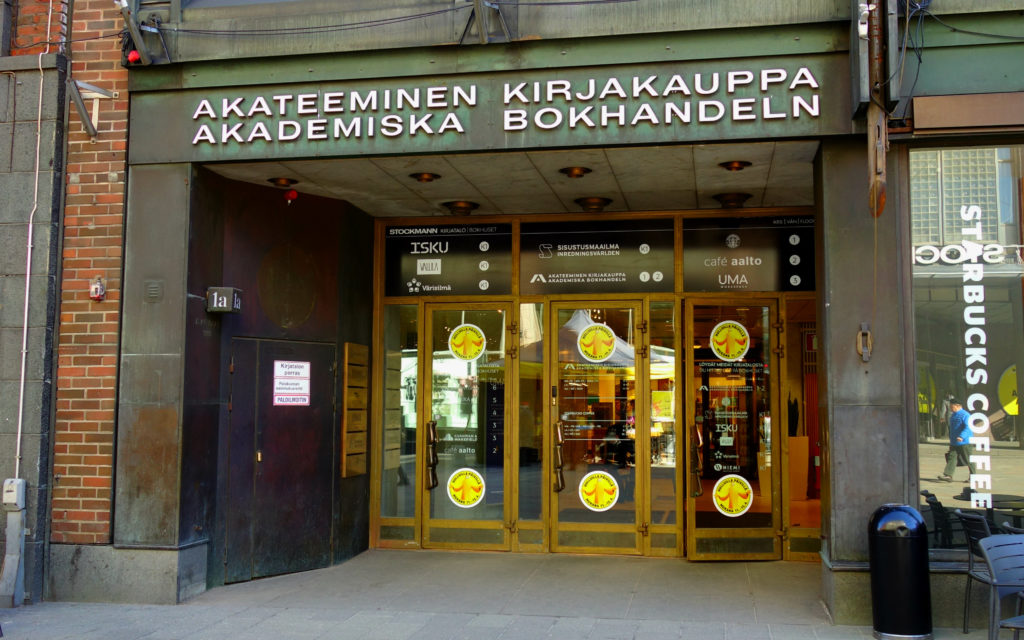 Finland was until 2009 the only country in the world that had Swedish as one of their official languages, since 2009 Swedish is also an official language in Sweden. Therefore, signs etc. in Helsinki have both Swedish and Finnish written on them, like the academic book store in the picture. 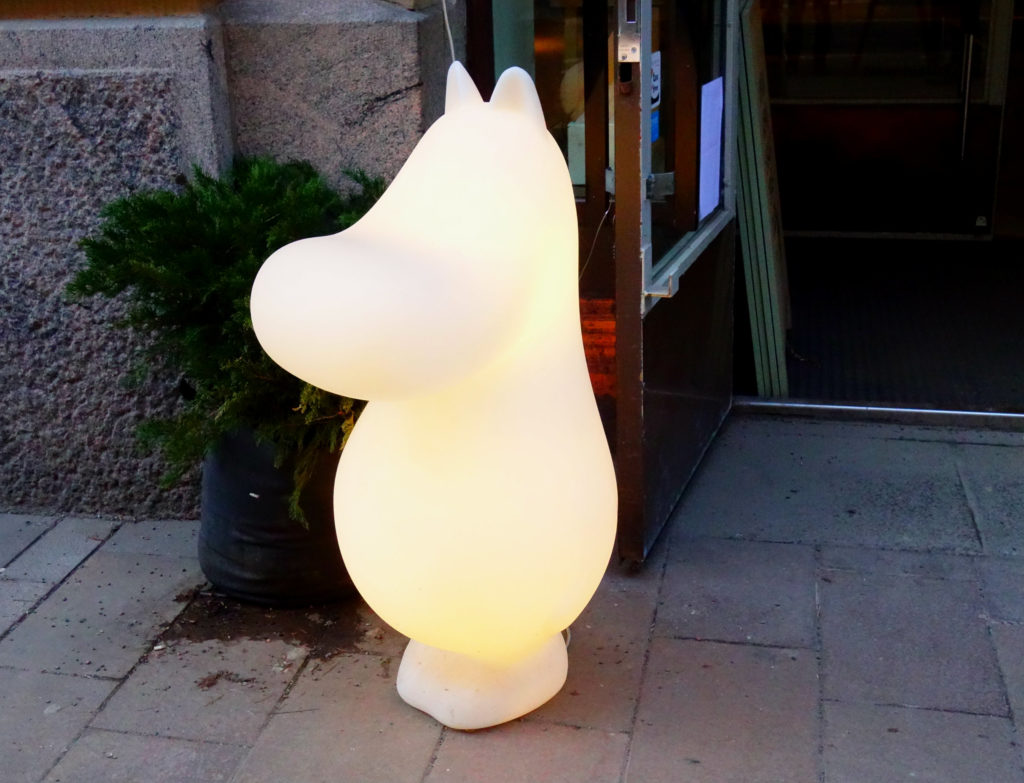 Finland has their moomins (by Tove Jansson) and we had to take a picture of one when we where here. 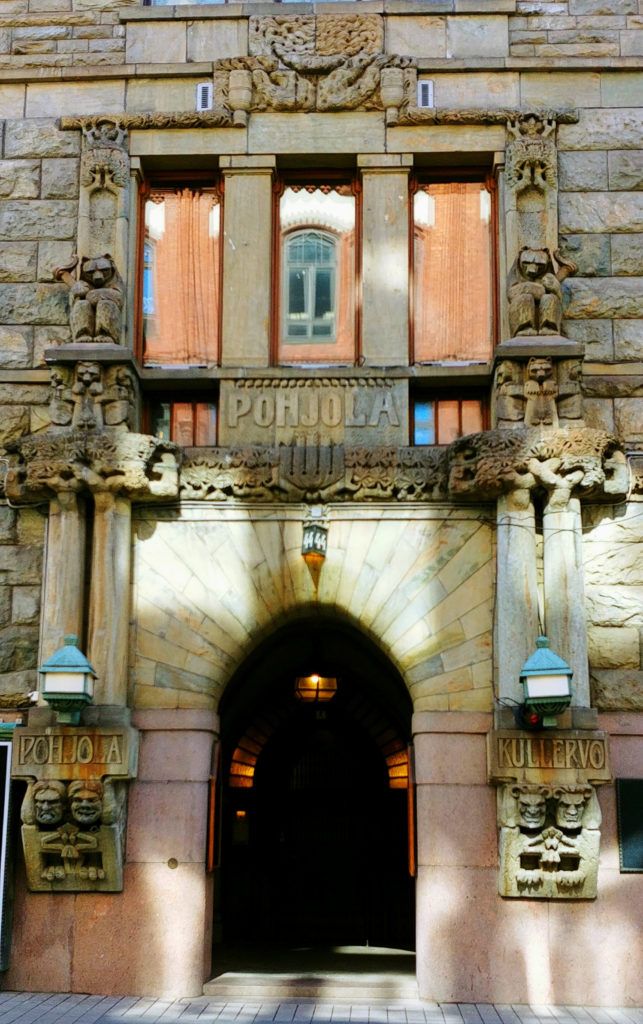 Atlas Obscura got us to see the Pohjola Insurance building – the company that wants to remind their customers that witches, bears, and gnomes are present so you better be insured. The building was built by architect Eliel Saarinen in 1901 and the name “Pohjola” is from the Finnish epic saga called the Kalevala. According to the legend, Pohjola was a Northern region ruled by an evil witch where you could find the roots of the World Tree. 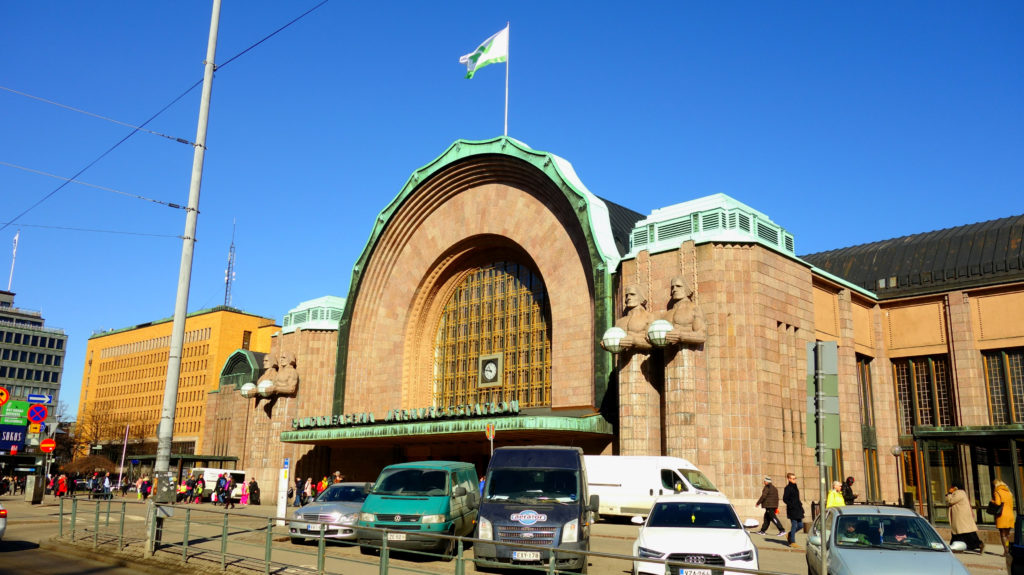 We walked passed Helsinki train station, which has an interesting architecture. 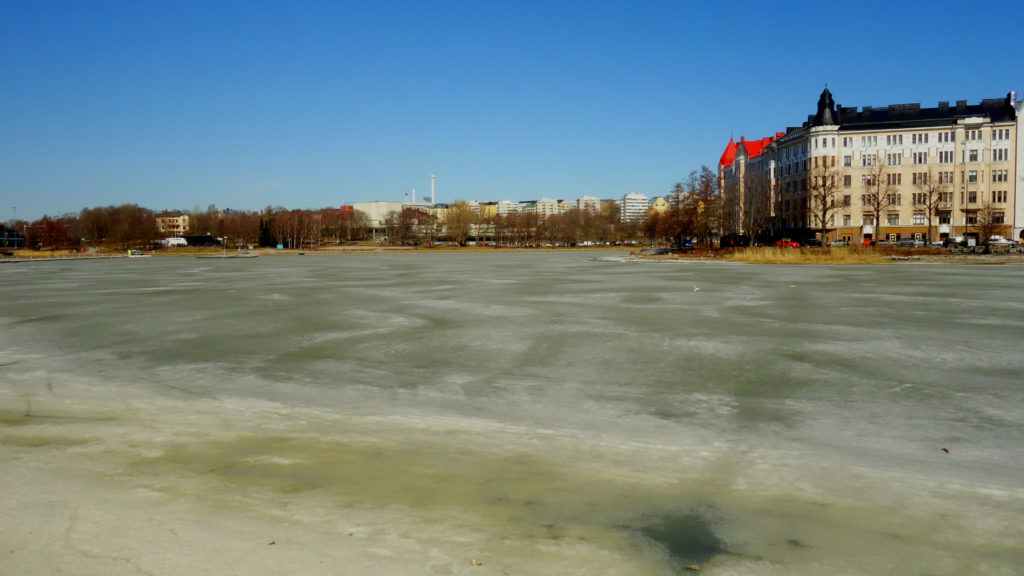 Djurgårdsviken was still covered by ice, when we were here. It looked fragile so we strolled around the lake to get to Berghäll, another district of Helsinki. We used google maps and Atlas Obscura (link to the site can be found in the end) to get around here and we think that we were able to see quite a lot of Helsinki by foot before we had to board the next ferry. 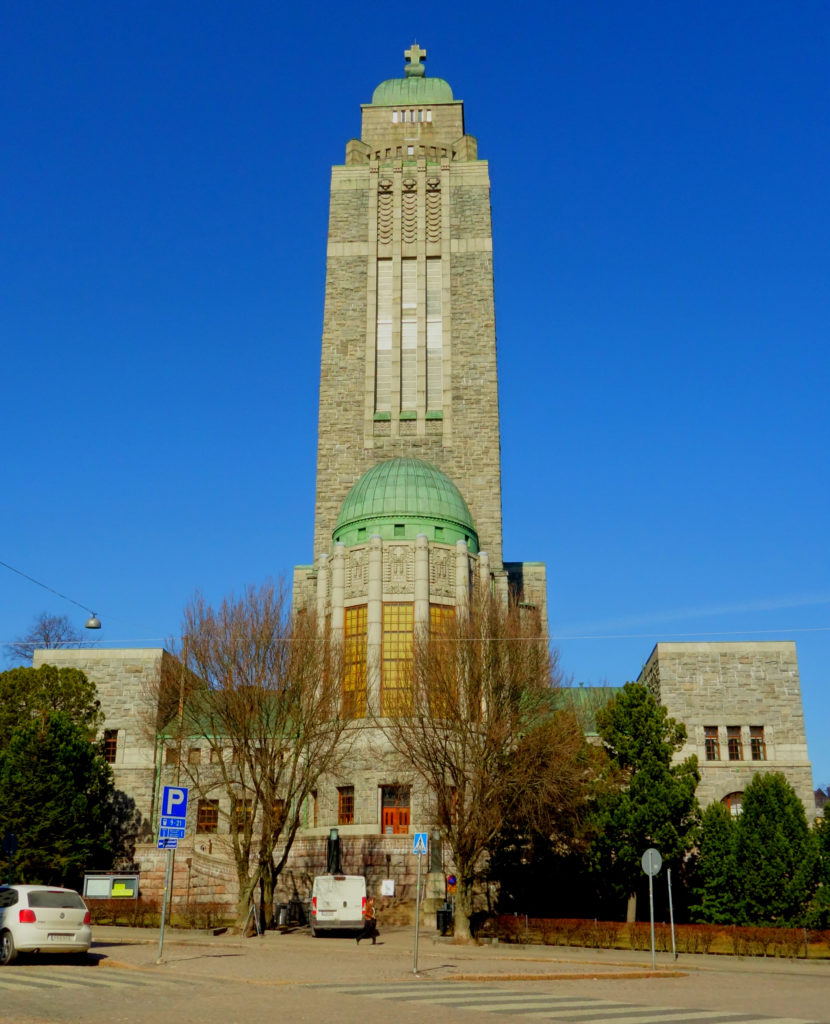 Churches are interesting and we think that the architecture, both exterior and interior, often reflects the culture and the mindset of the people in that country. In Finland, the embellishments and colors are stripped of the church, whereas churches in Central America are much more colorful and full of decorations. 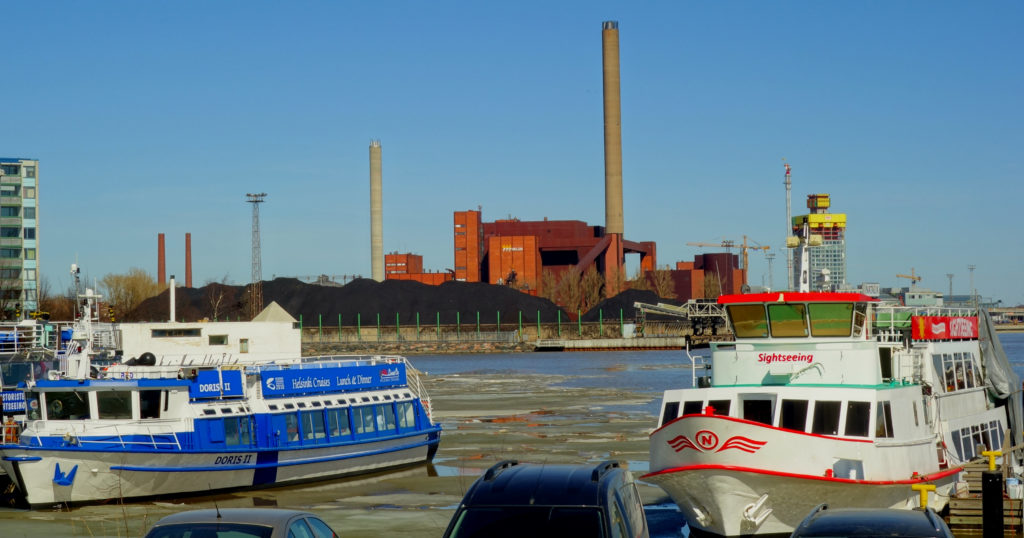 We found a lot of beautiful wooden ships in the Northern harbor. More pictures from Helsinki can be found in the slideshow below. 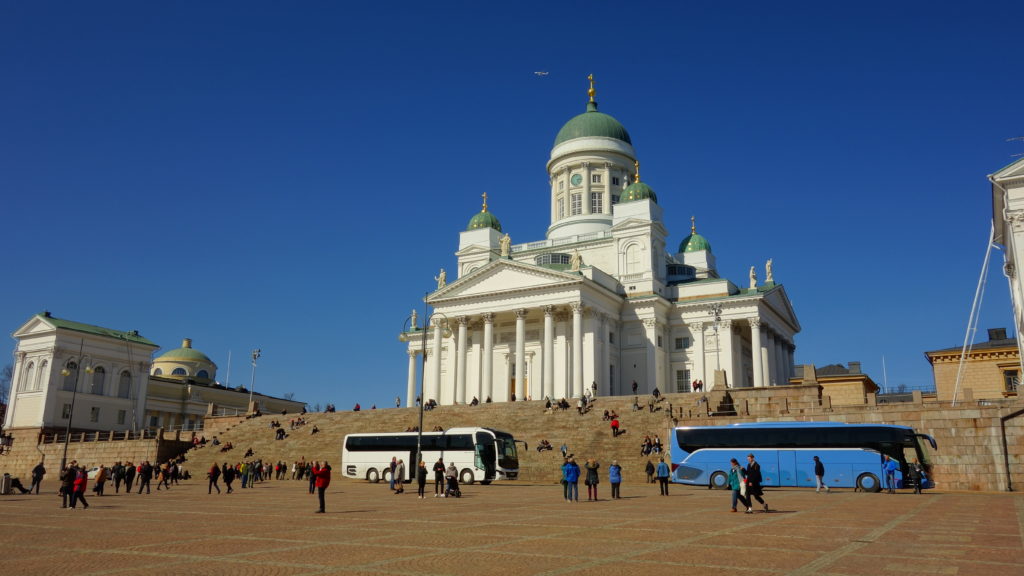 Helsinki Cathedral was one of our last stops on our walk before we left Helsinki. 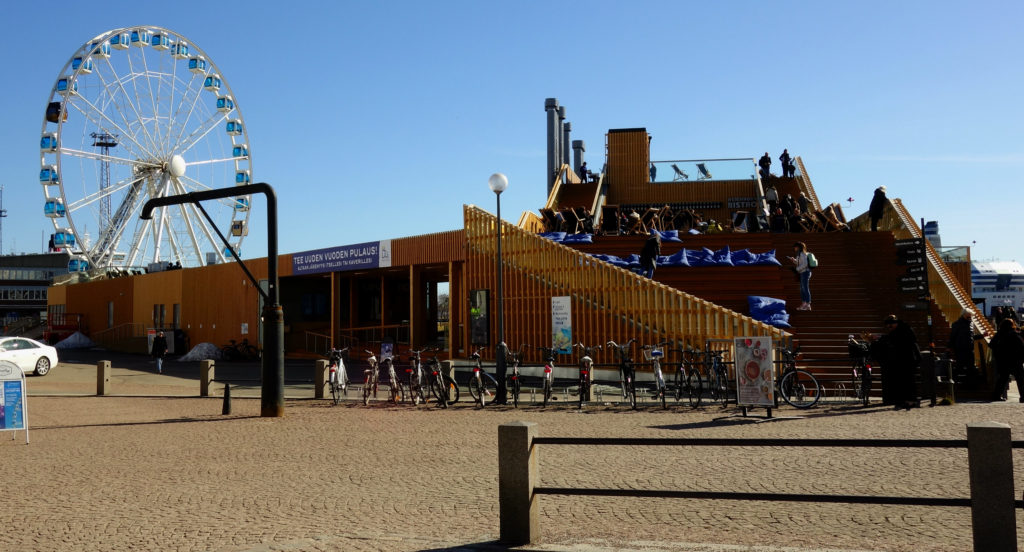 Skatudden seems like a nice place to chill out during the summer months in Helsinki. Our ferry departed from Skatudden so we had to go to the ferry terminal. 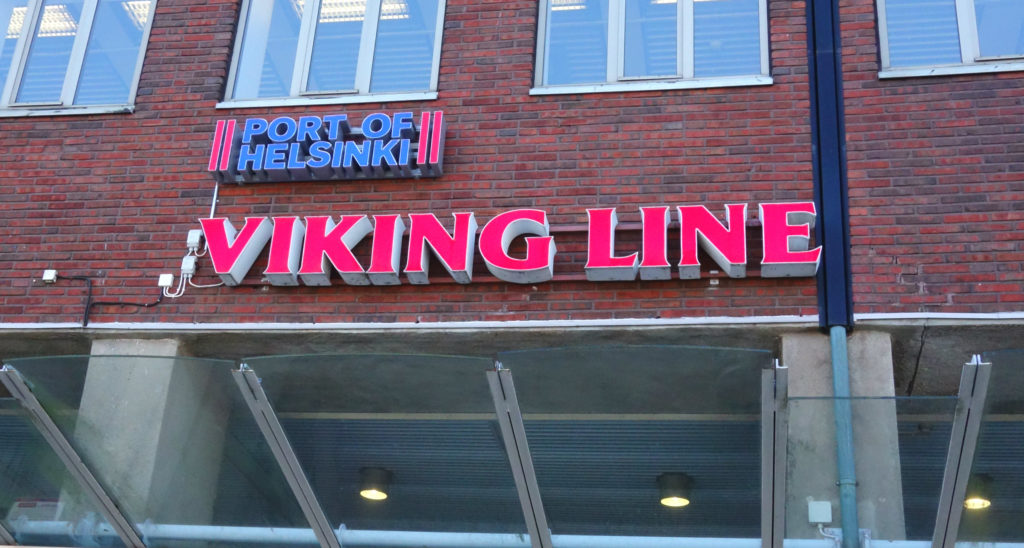 We went with Tallink to Tallinn, but we couldn’t book a ticket back to Sweden at the same time, because we didn’t know how long we needed to stay in Estonia. So when it was time for us to go to Sweden, it was cheaper to take the morning ferry to Helsinki and from there, take the night ferry with Viking Line to Stockholm. This was the reason we had an unexpected, but pleasant, day in Helsinki. 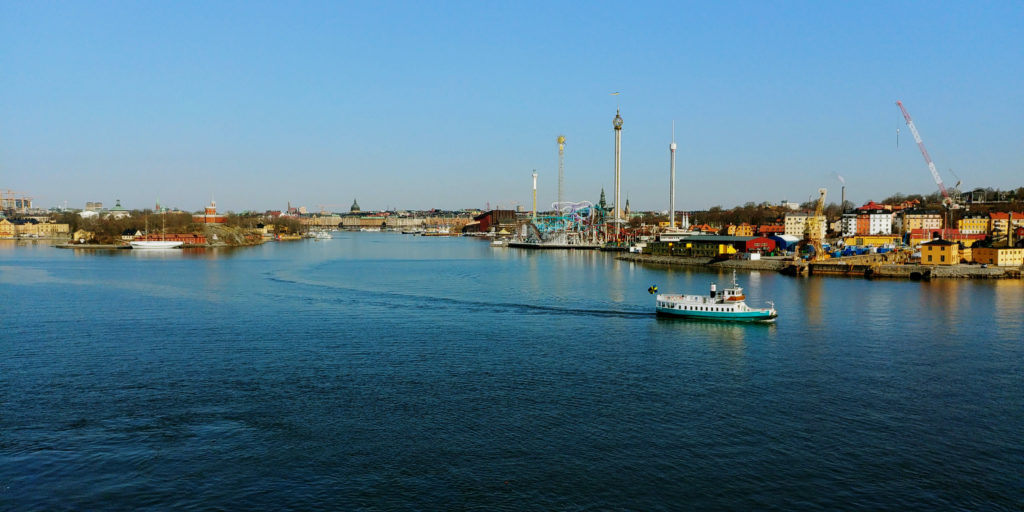 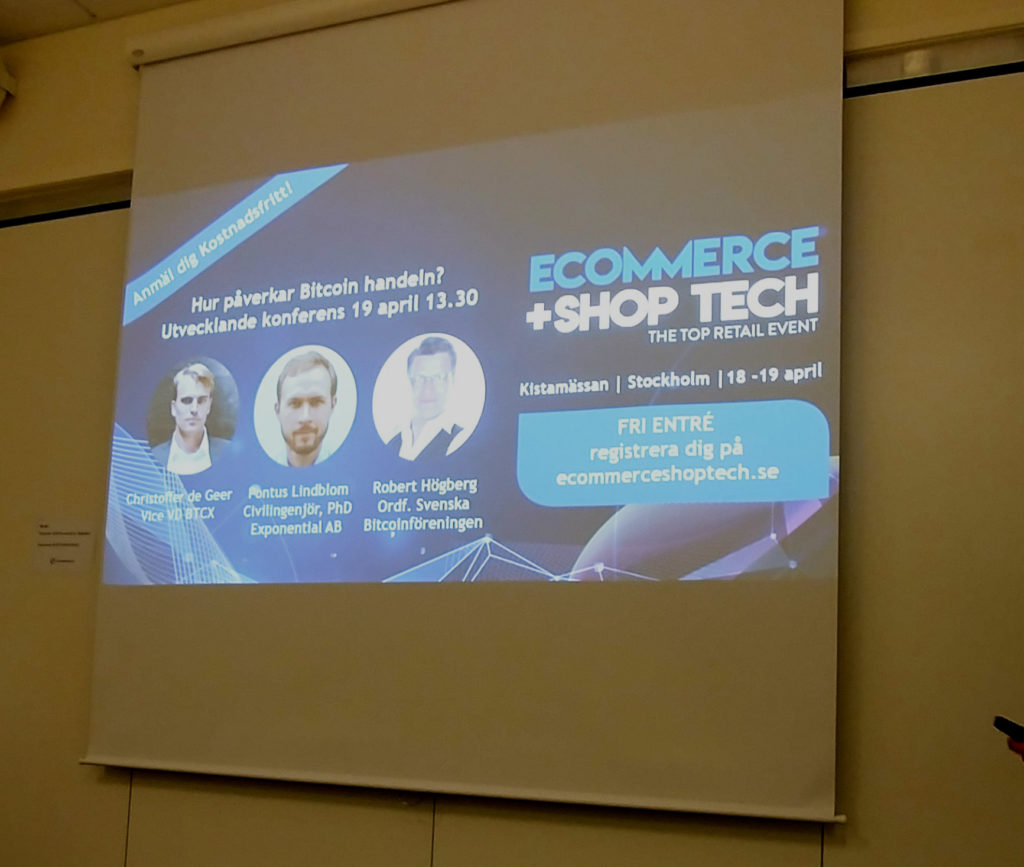 Back in Sweden and Pontus had a lecture about Bitcoin and the current economic system at the E-Commerce and Shop Tech fair. 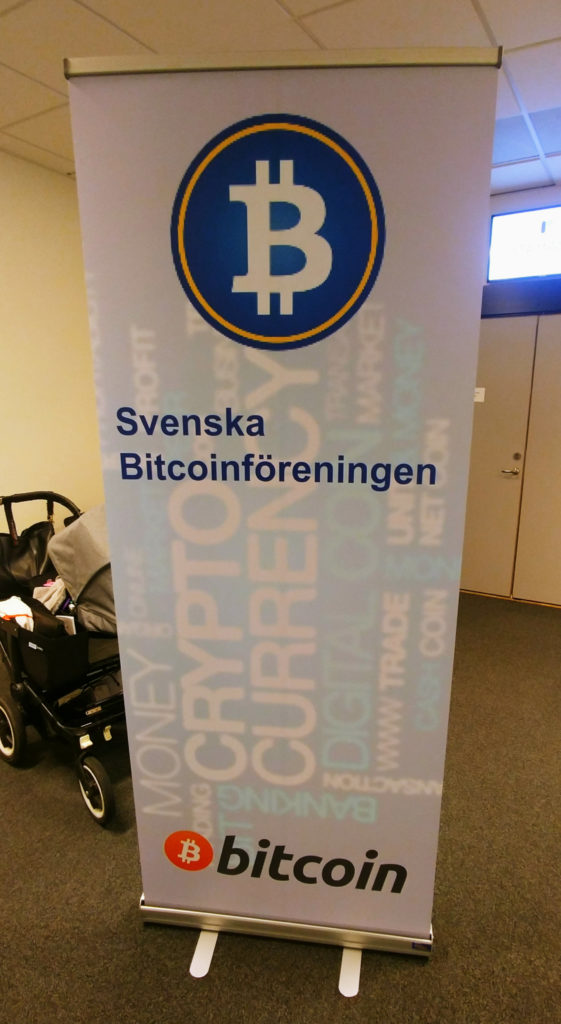 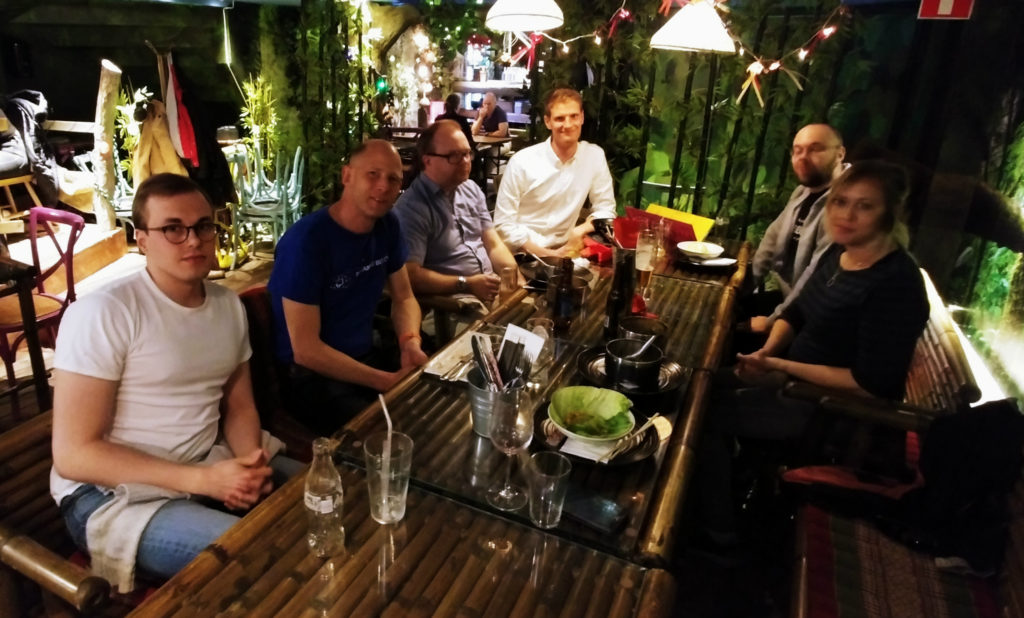 We also ended up meeting up with our old Bitcoin meet up group in Linköping. 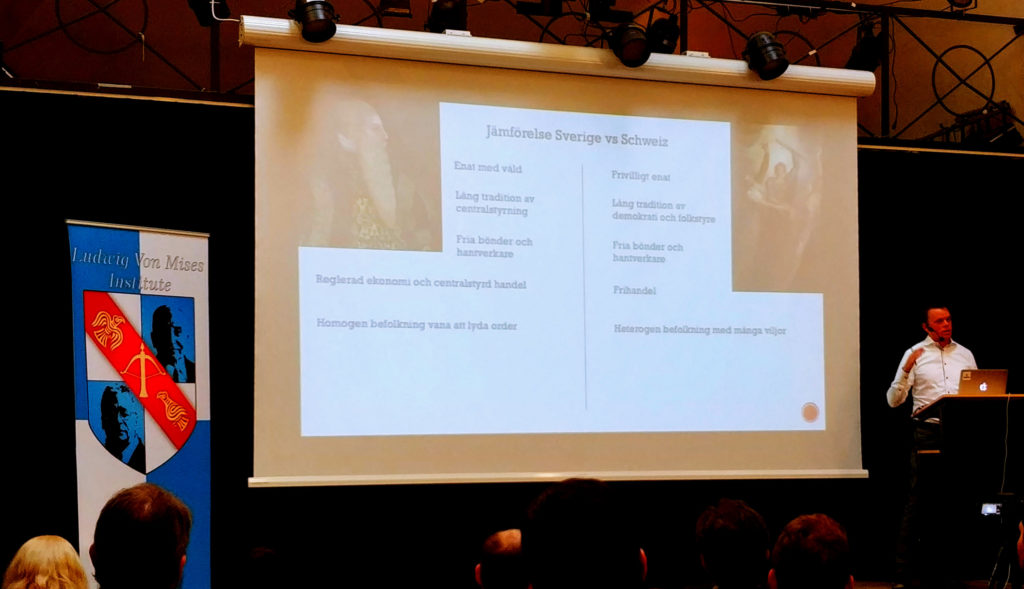 We were able to attend this years Freedomfest in Stockholm arranged by the Swedish Mises Institute. We were able to meet a lot of like-minded people and the rumor is that the record of attendants was broken this year. One of our favorite lectures this year was the comparison of Sweden and Switzerland and why Sweden is much more vulnerable than Switzerland by Stellan Abrahamsson. All public lectures can be found in the link below (in Swedish).

Lovely day and lovely people during the second loc