We like meeting up with Libertarians and/or Bitcoin enthusiasts wherever we go and in Limassol we got the opportunity to meet with a Swedish freedom-minded person, Robert. Robert is the person behind the blog Avancemang and you can also see his political illustrations here and there, for instance in the newspaper Göteborgsposten and other places.

Just before we met Robert we both listened to the newly started podcast from the Classical Libertarian Party where Robert was the first guest to have a conversation with another well-known Swedish Libertarian blogger and a candidate for the Liberatarian Party, Erik or Pophöger. Yes, Sweden does have one Libertarian Party, but it is tiny. 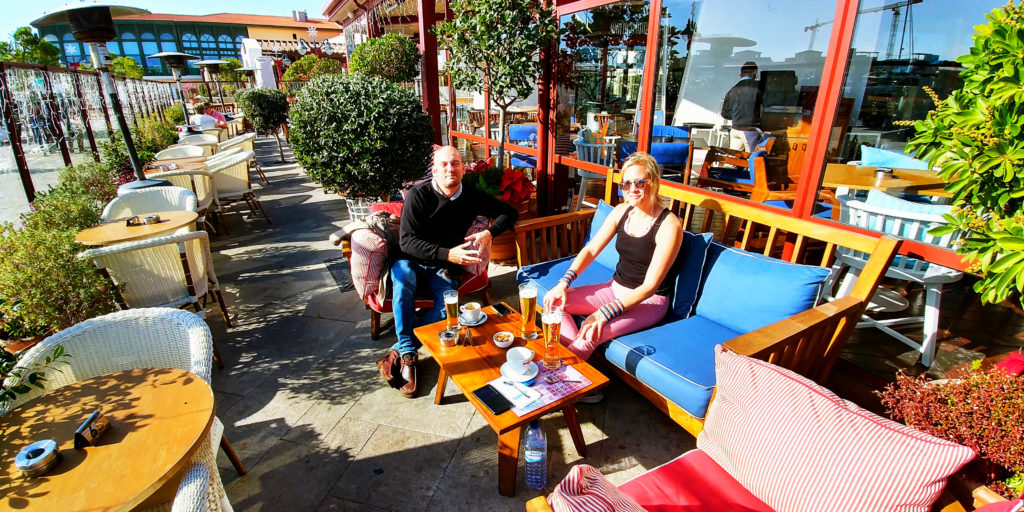 Robert was one of the reasons we decided to go to Limassol and we finally got a chance to meet for lunch and talk about everything from politics, education, expat life and cryptocurrencies. 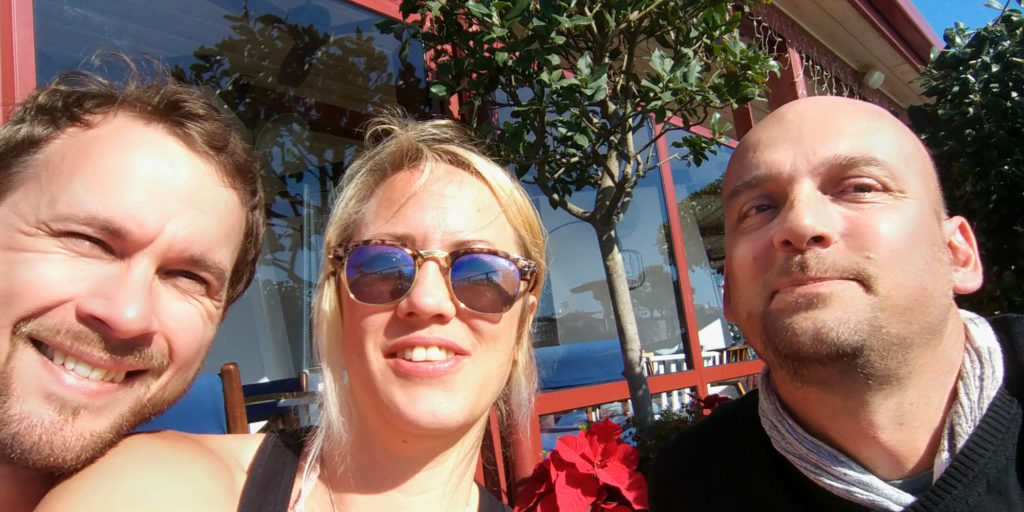 We wanted to send a message to Pophöger (a political, Swedish blog persona), but we only manage to get this less flattering picture. Hej Erik! 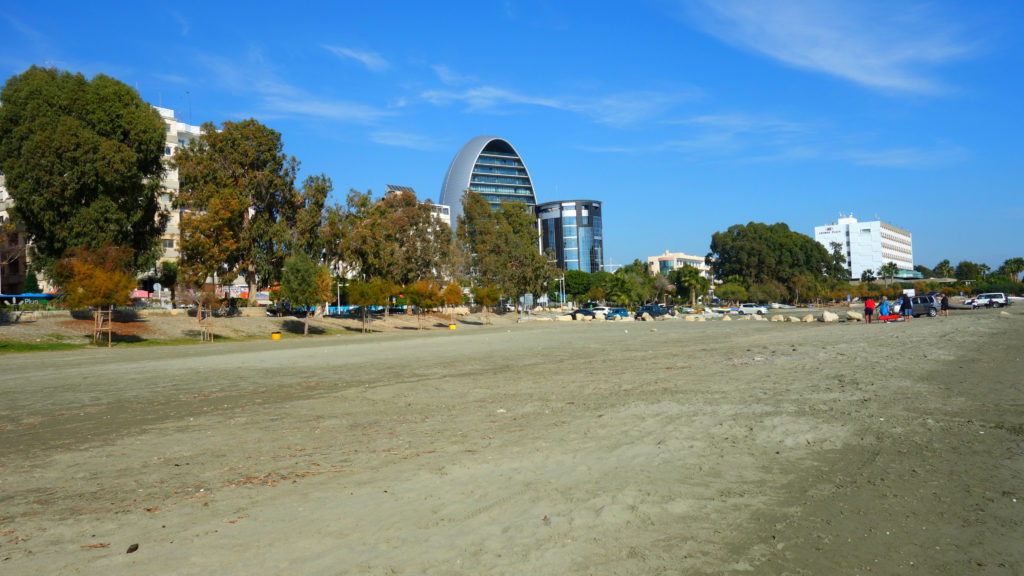 We lived near this egg-shaped building and we only had a few minutes-walk to the beach in Limassol. 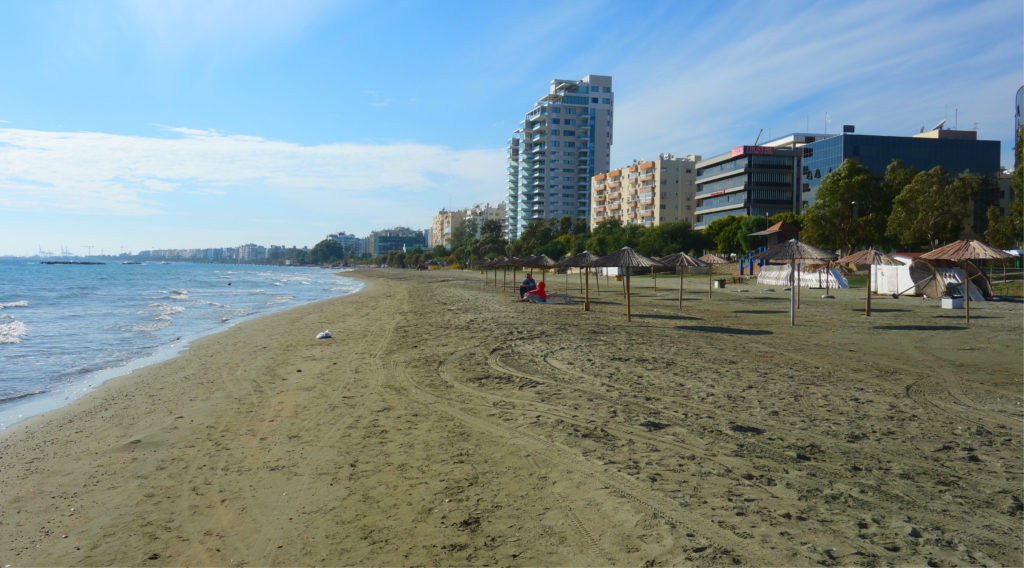 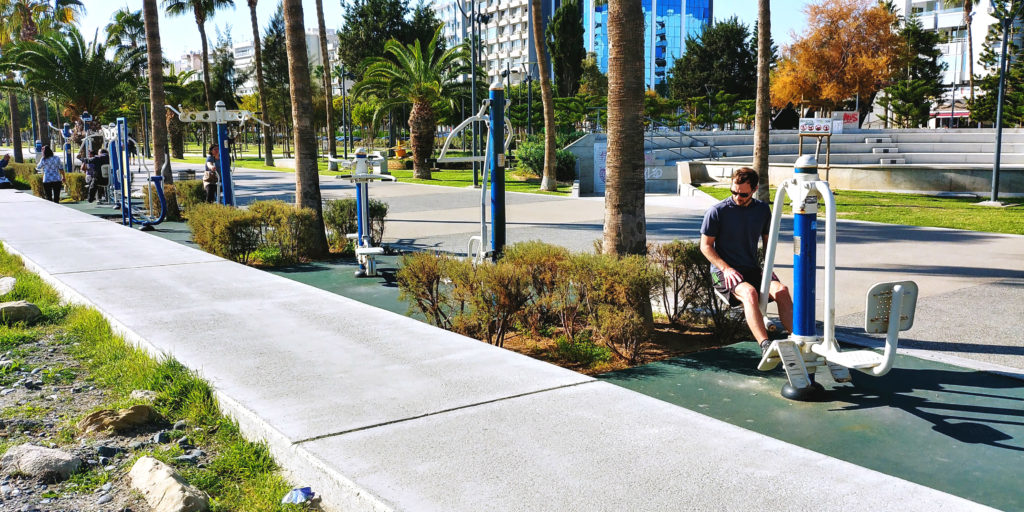 We also used the out-door gym at the Limassol Promenade. It is so much nicer to work out when you are in a warmer climate.

Limassol is also lovely to explore by foot and we really like the Promenade. 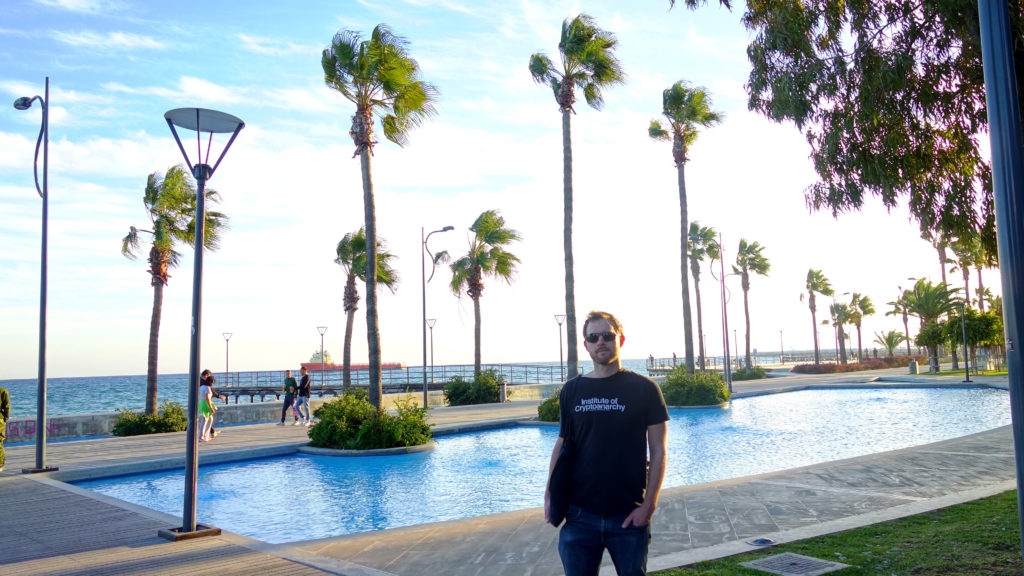 There are several art installations along the Promenade, for example the artificial lake, which you can’t jump in to, the warning signs claim that you can get electrocuted if you do. 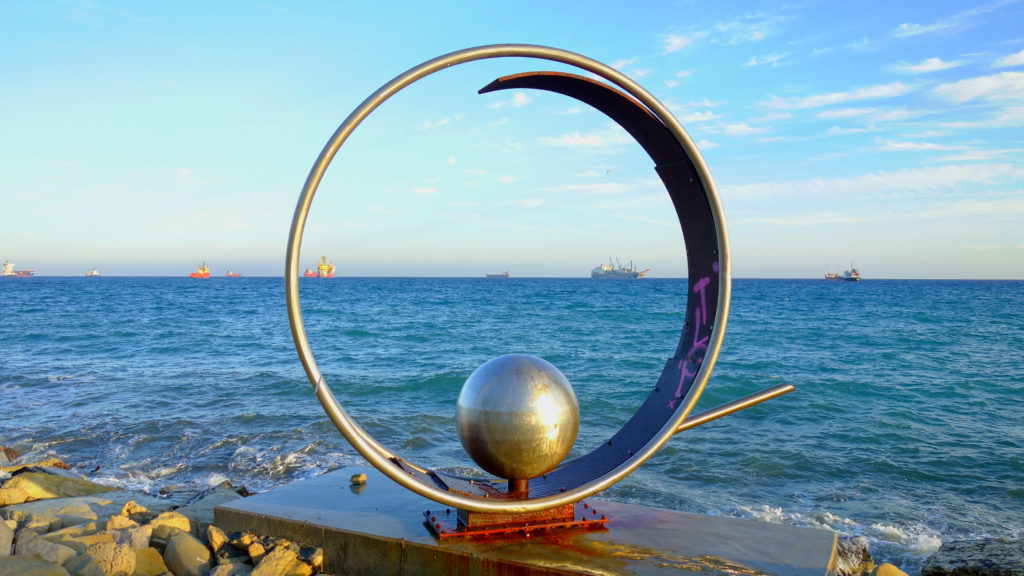 Other art installations are less lethal. Also a lot of big ships  are anchored along the coast of Limassol. 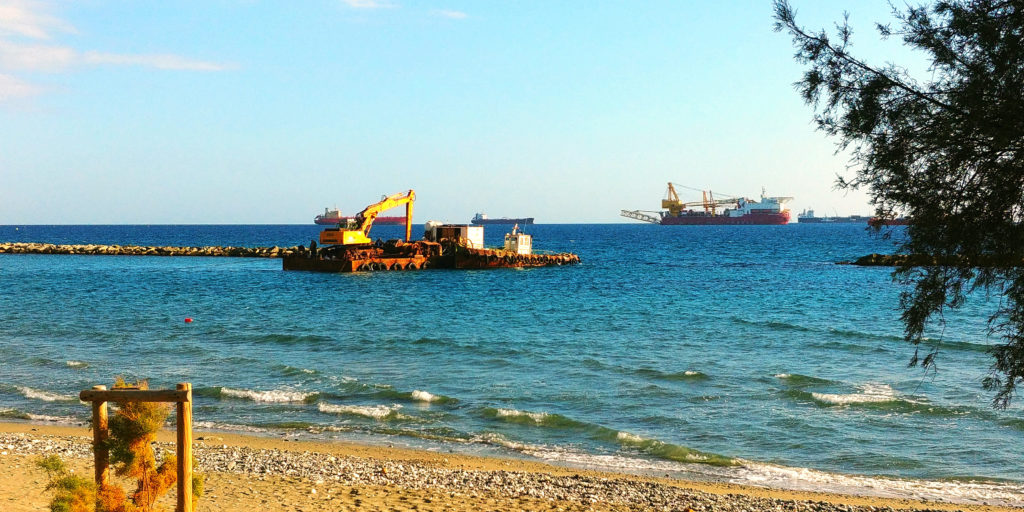 It looks like some of the ships are involved in building something just off the coast of Limassol, but we don’t know what. 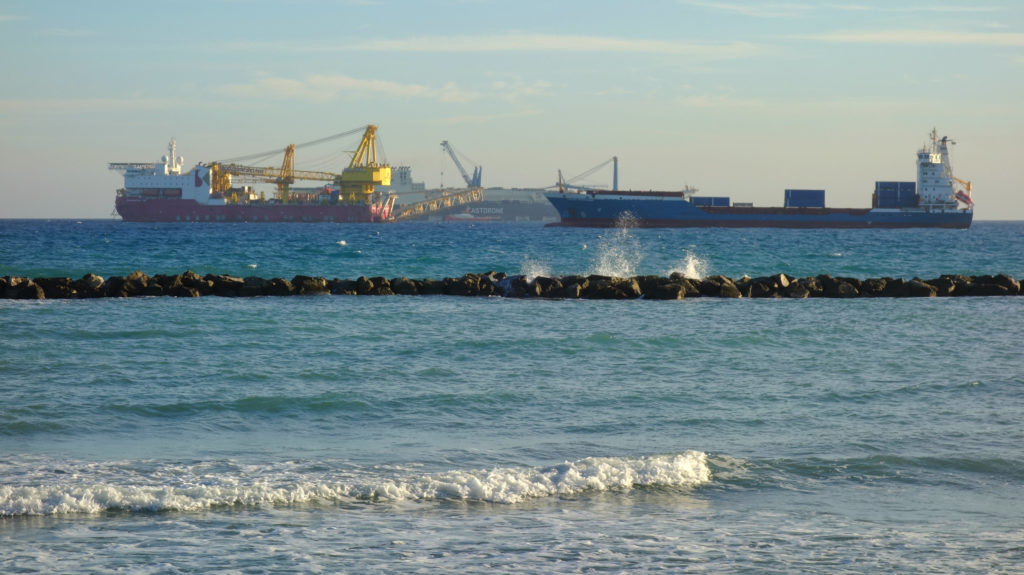 Is it going to be an artificiall island or are they looking for something? 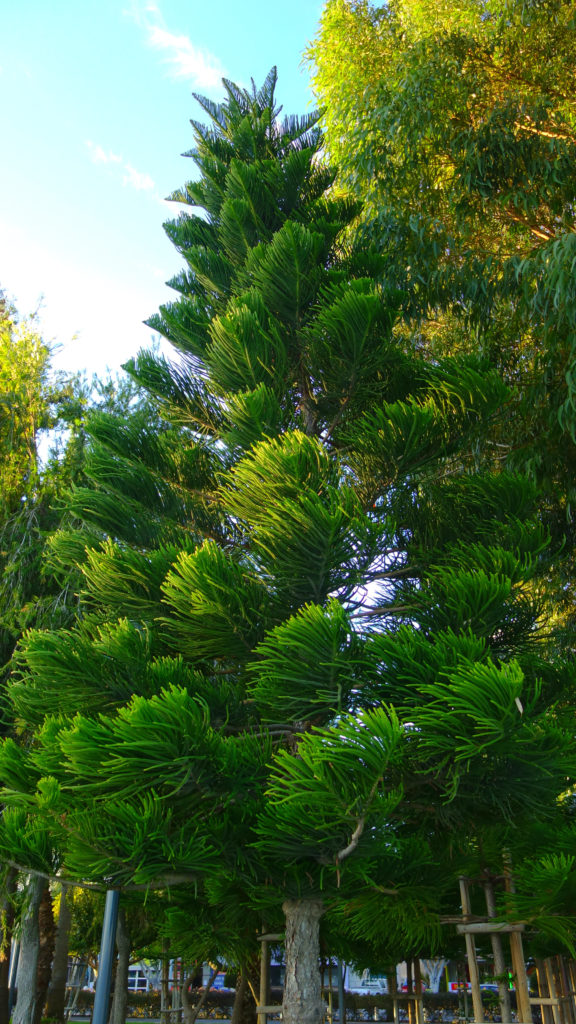 We found a giant Christmas tree among all the palm trees and leafy trees. 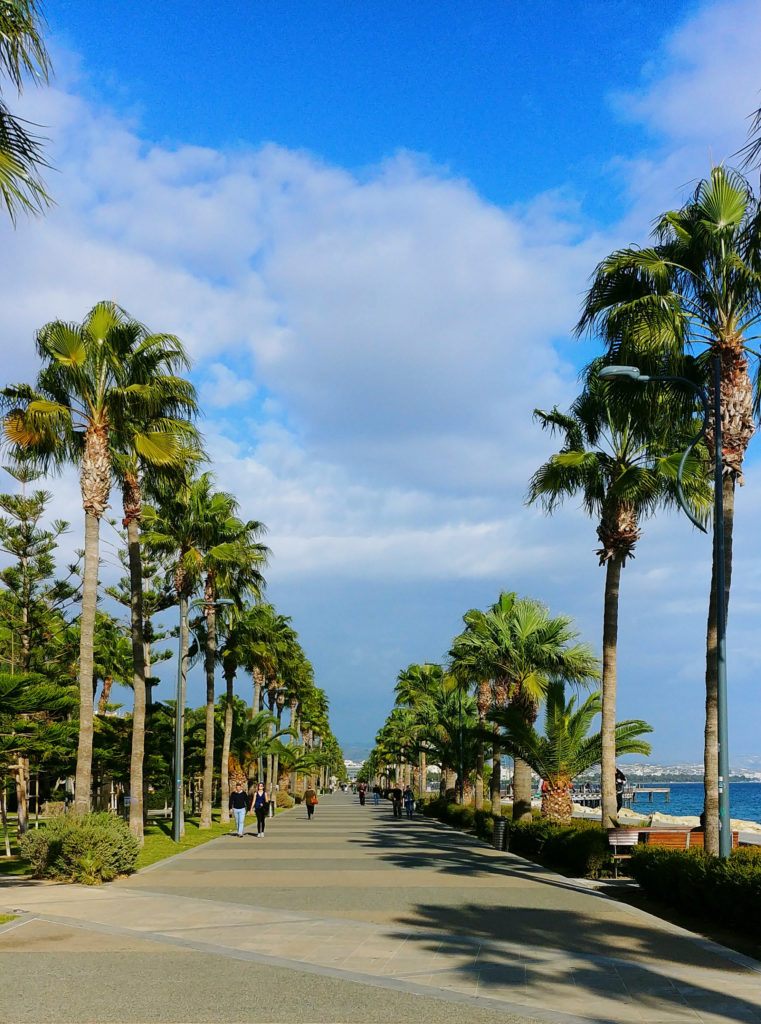 Limassol Promenade from the harbour side. 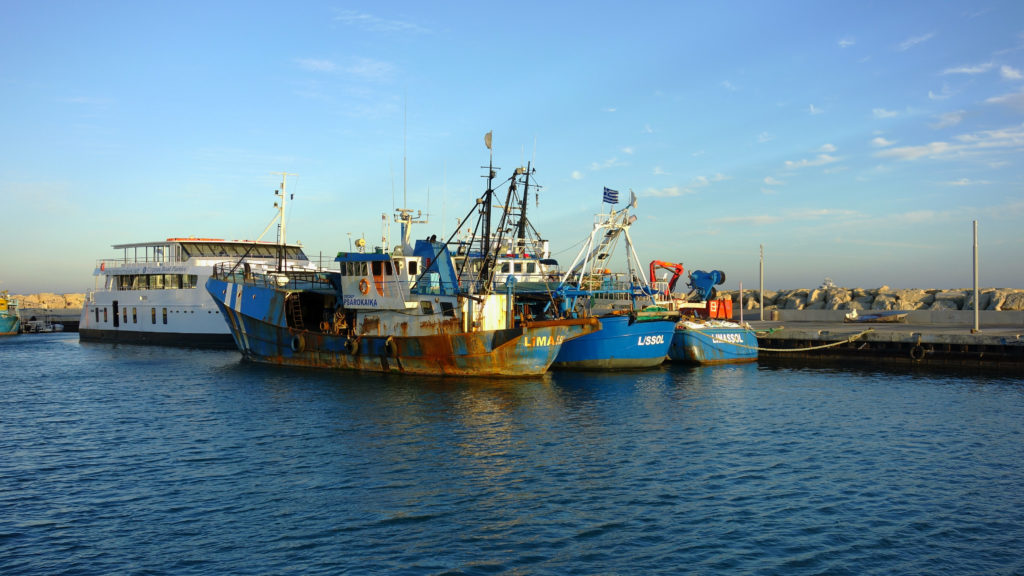 The harbour consists of two parts – the old harbour, 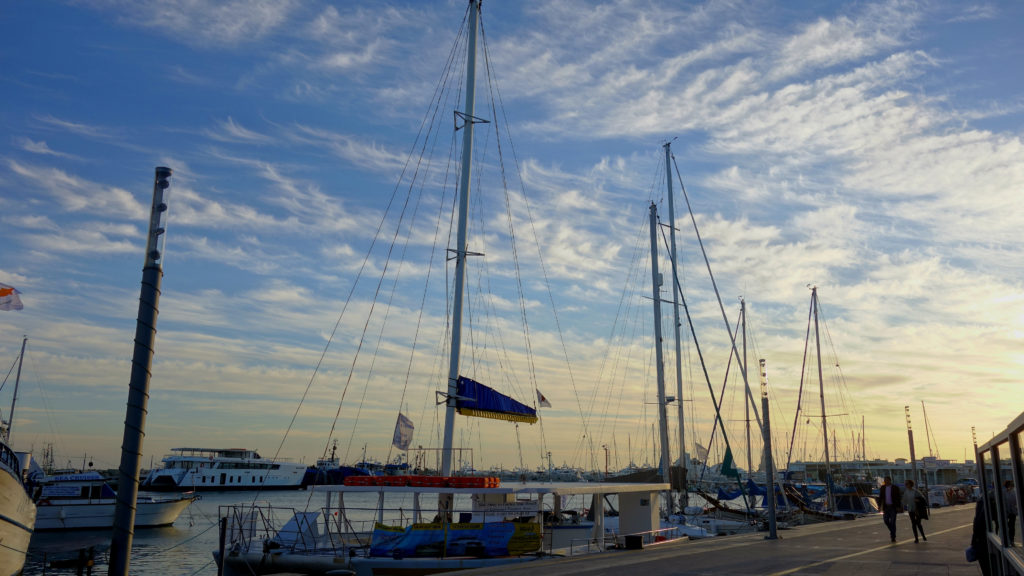 And the new harbour. 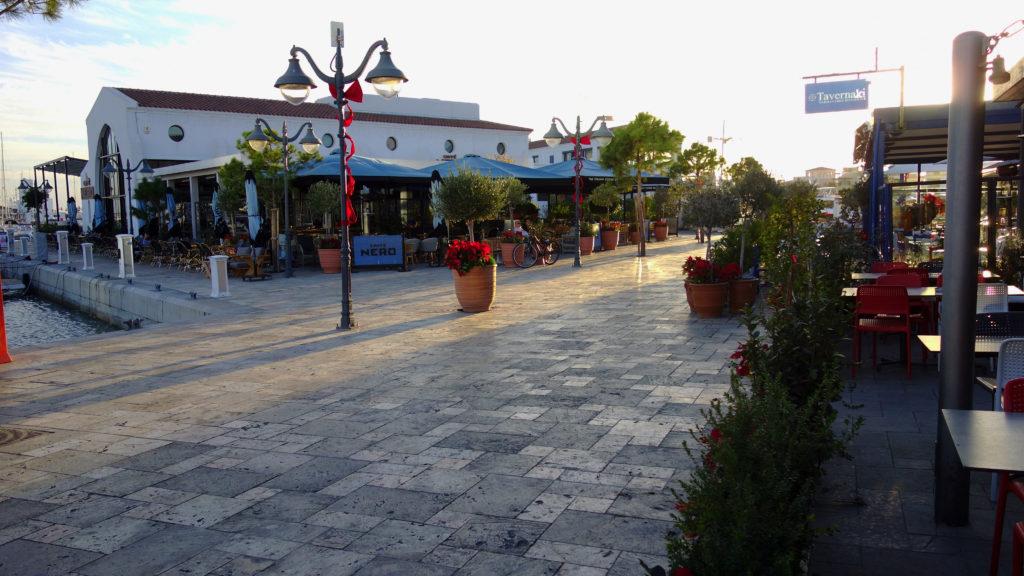 There are a lot of nicer restaurants and shops at the new harbour. Off season for tourists so it was quite empty. 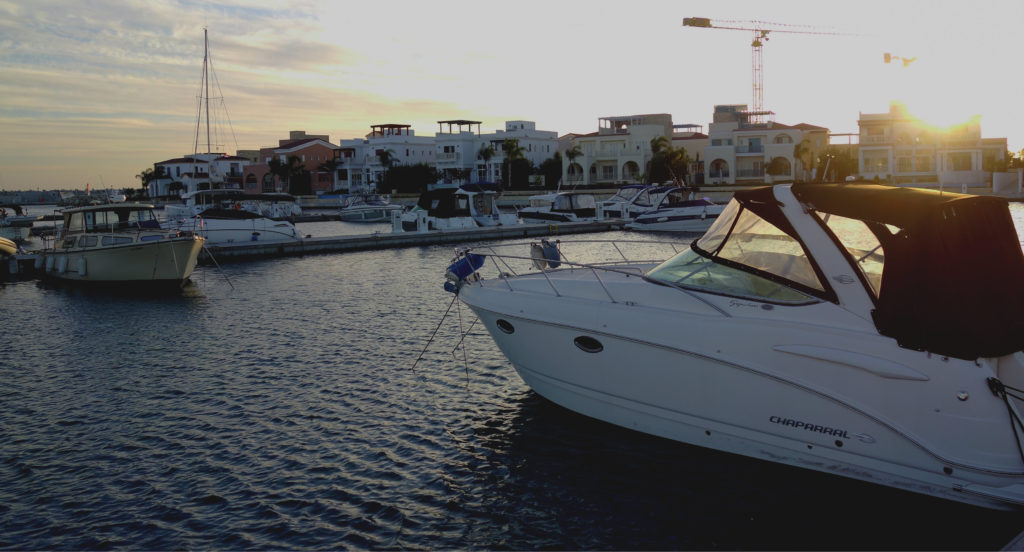 There is an newly built artificial island with expensive houses next to the new harbour. The Cypriots are building like crazy and we saw a lot of advertising of future luxury homes and flat complexes that were in the progress of being built. 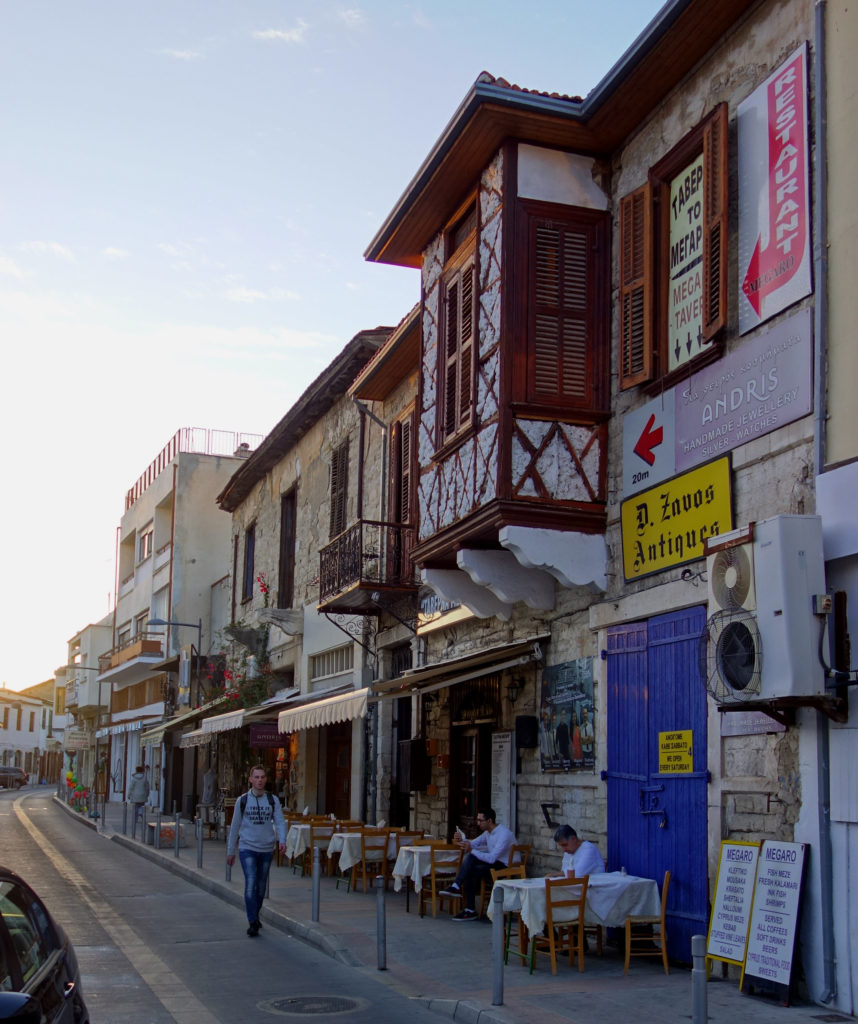 We walked through the old town of Limassol, but it was a tourist trap, so we didn’t stay there for long. 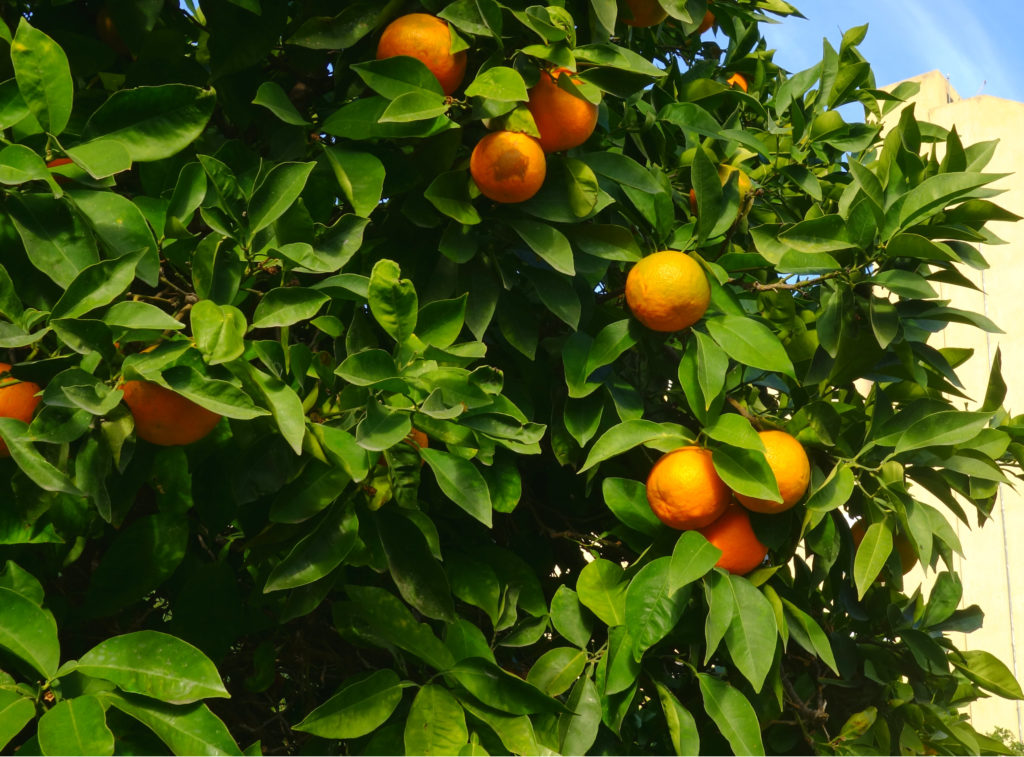 It is lovely to see fruit trees in peoples gardens, even in a bigger city like Limassol. Imagine just to go outside in the morning and grab a couple of oranges. 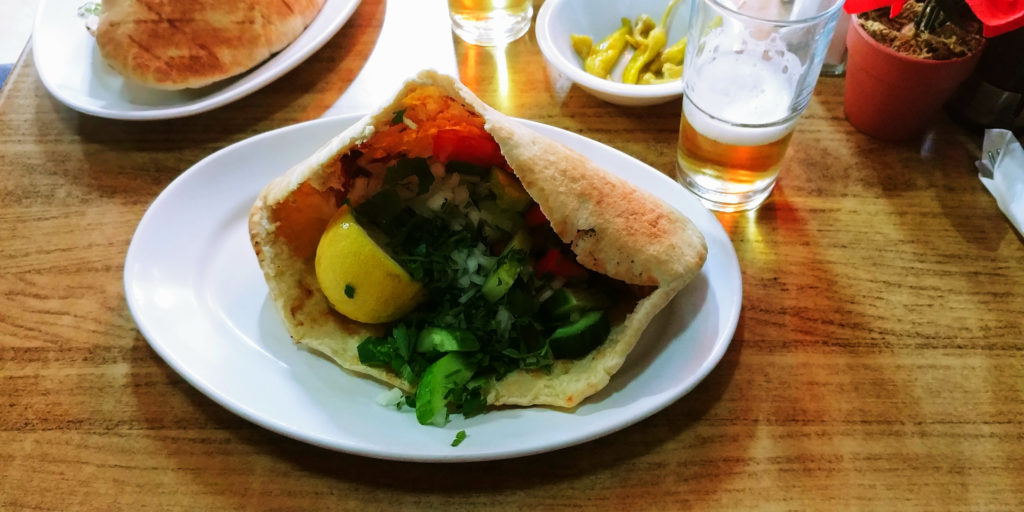 We can’t complain about the Cypriotic food. Sheftalia, pictured here, is a traditional Cypriotic dish. It is a sausage wthout skin. Instead the ingredients are wrapped by either caul fat or omentum (the membrane that surrounds the stomach of pig or lamb). We ate it with lots of salad in a Pita bread. 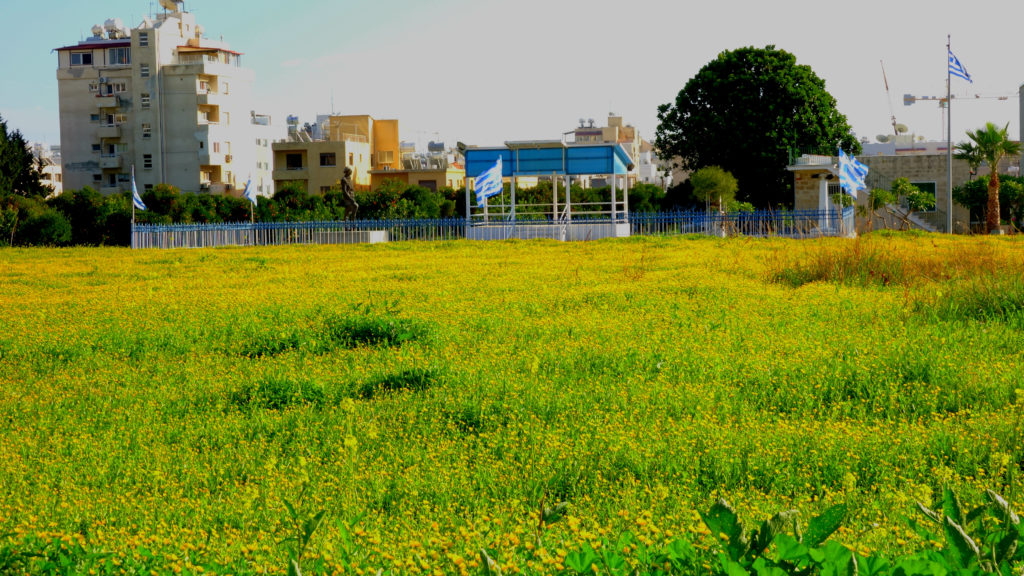 The Greek-Cypriotic part of Cyprus is really like Greece. On our walk we passed the Grivas Digenis Mausoleum, where Georgios Grivas is buried. General Georgios Grivas was the leader of the EOKA guerrilla organisation and the EOKA B paramilitary organisation, that fought for getting rid of the British colonial rule and annex Cyprus to Greece. 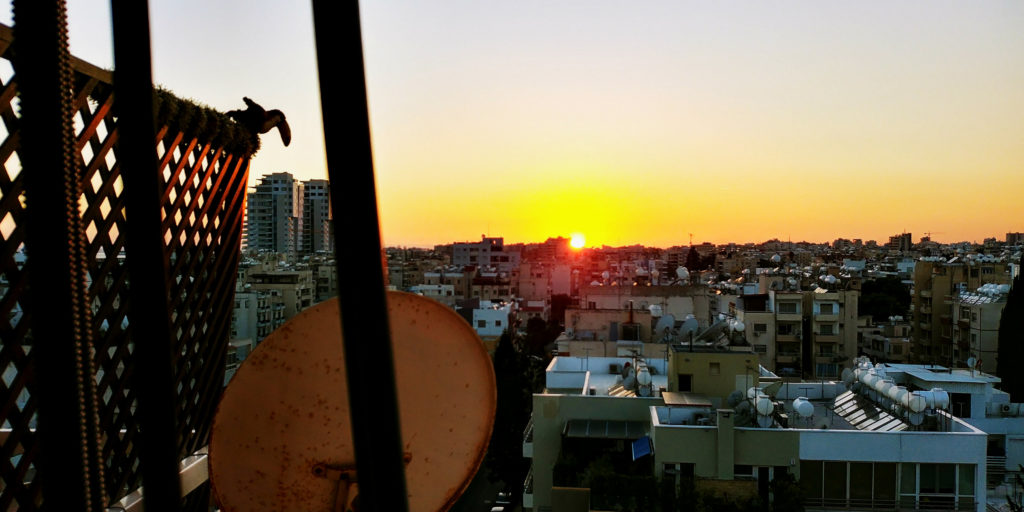 Then it was time for us to leave Limassol for where we decided to celebrate Christmas this year, Paphos.
You can find more pictures from Limassol in the slide show below.