Back in Prague hanging out with the Kings

We were back in Prague for a special reason and we came here to stay for an unknown length of time, because we waited for a special person to join us. We love to spend time with our friends the King family, their travel and unschooling blog can be found here, and we realized that we’ve only known each other for two years, but it feels way longer. The first time we met each other was in Bali 2015, after we got in contact through the Swedish Bitcoin community on facebook, and we share the same values and thoughts about moral and ethics, so it is nice to hang out with them. 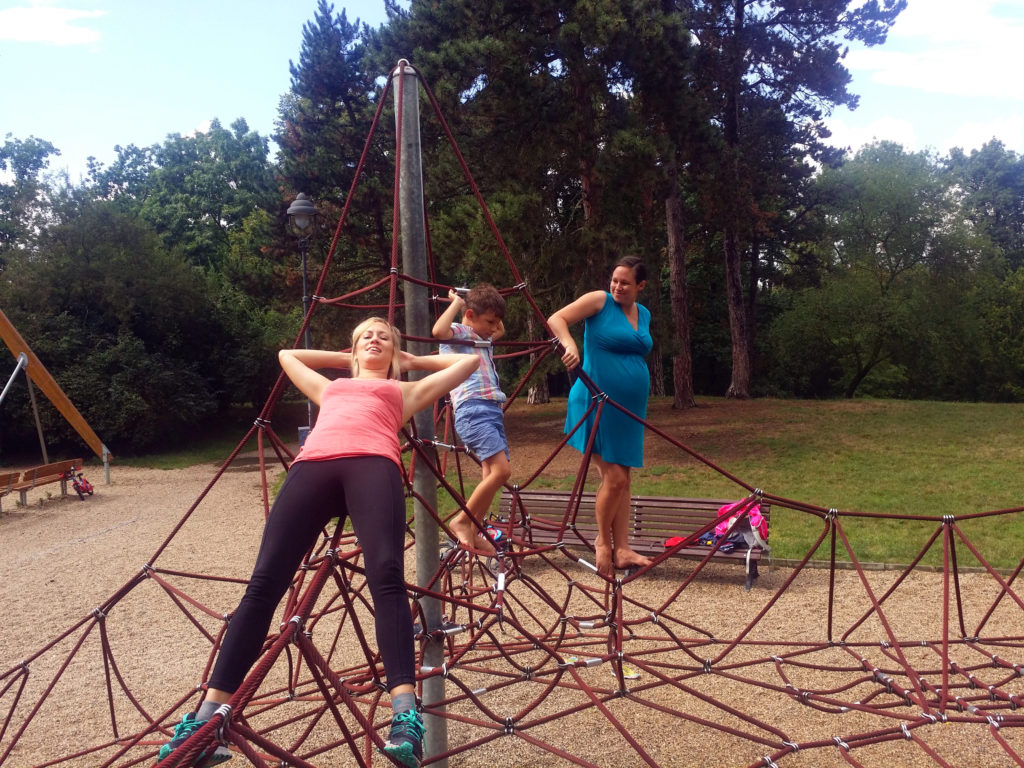 We were now back in Prague, hanging out and helping these guys! How many pregnant, almost 40-weeks, women do you see climbing around in a park? 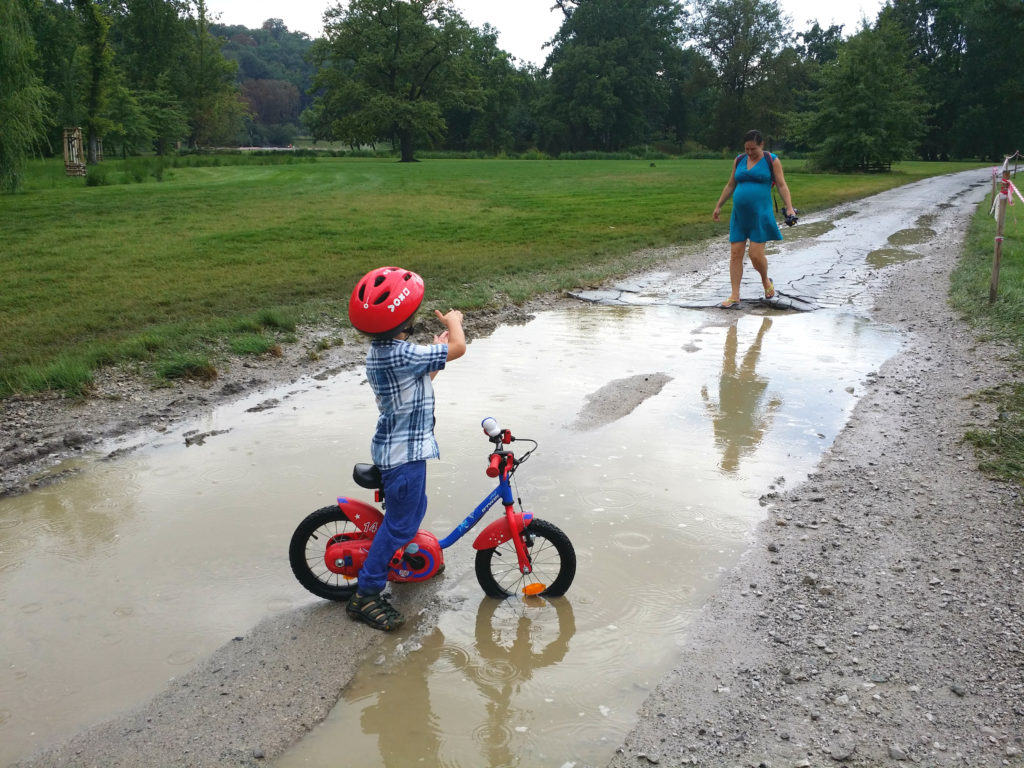 We went here to take care of Winston and Henry when their little brother would decide to come out.

And to see cool stuff like the Výstaviště (the industrial palace) in Prague, which is an exhibition ground built in 1891 for the World’s fair exhibition. 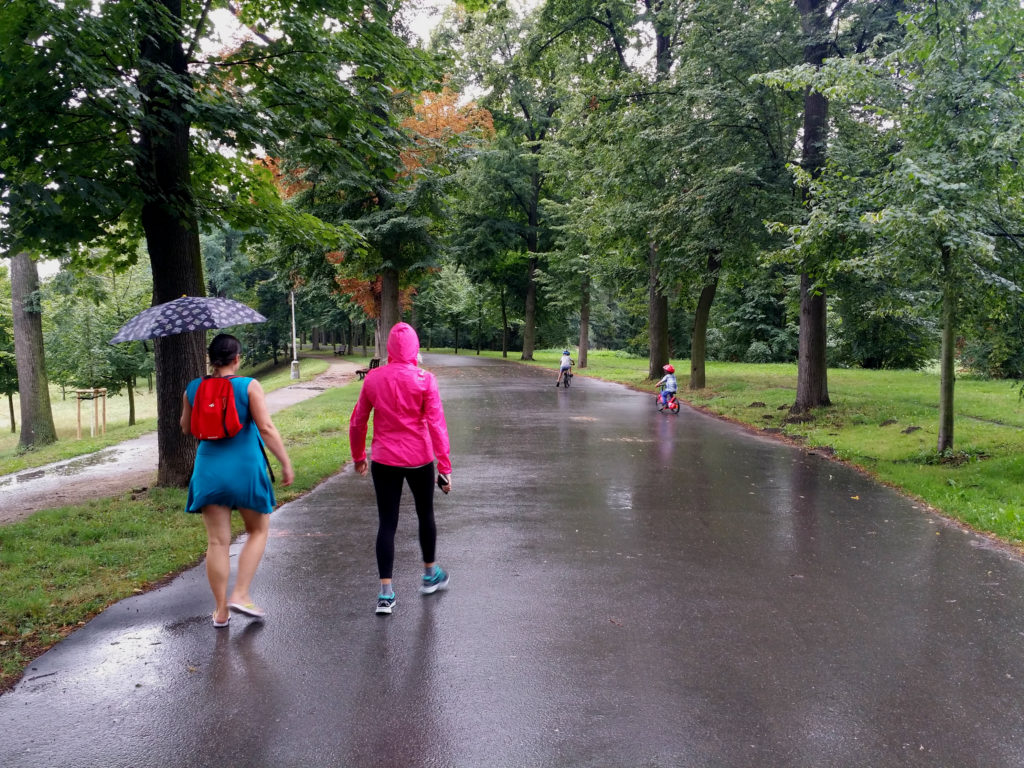 Out on a walk in the Park Stromovka in the rain with Caroline and the boys in the first half of August. 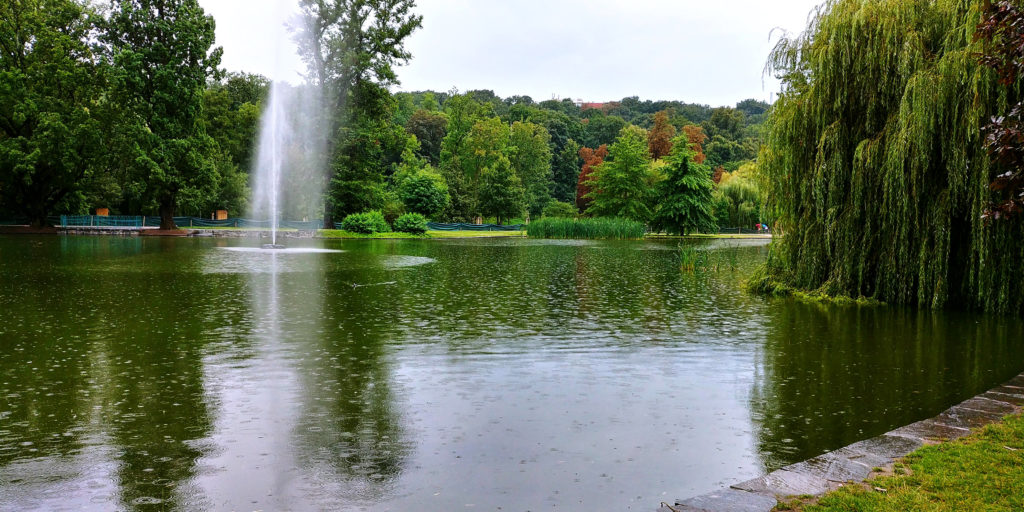 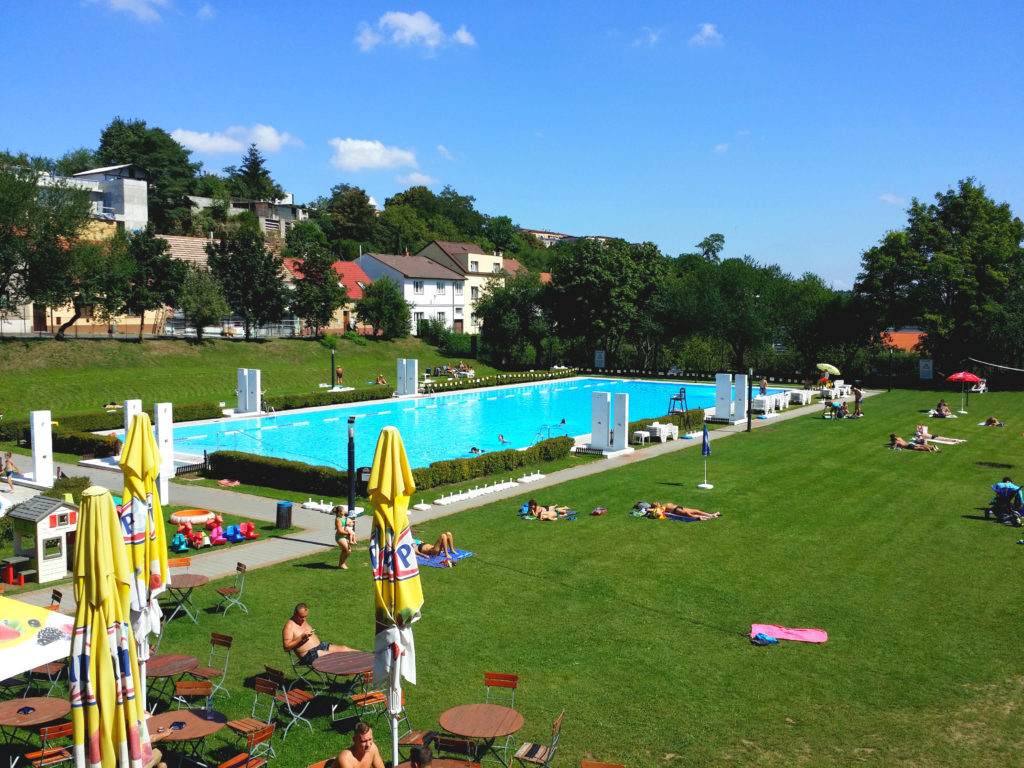 The Czech Republic is not famous for its natural lakes, so Caroline and the boys took us to a nice outdoor pool during the hottest days in August. 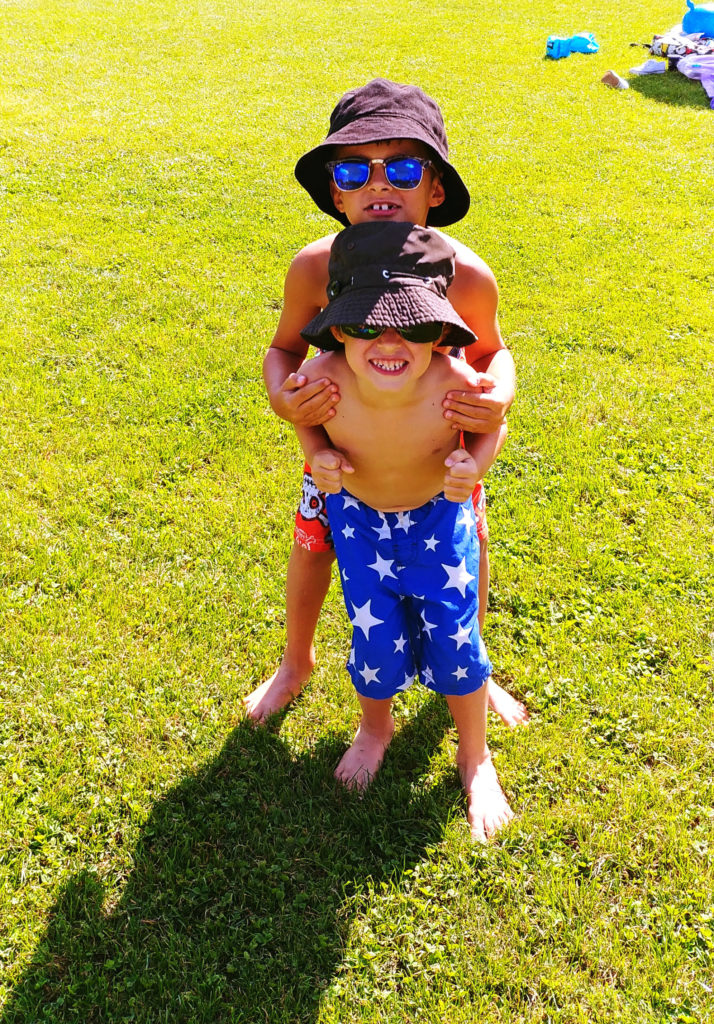 Winston and Henry got hold of our hats and sunglasses! 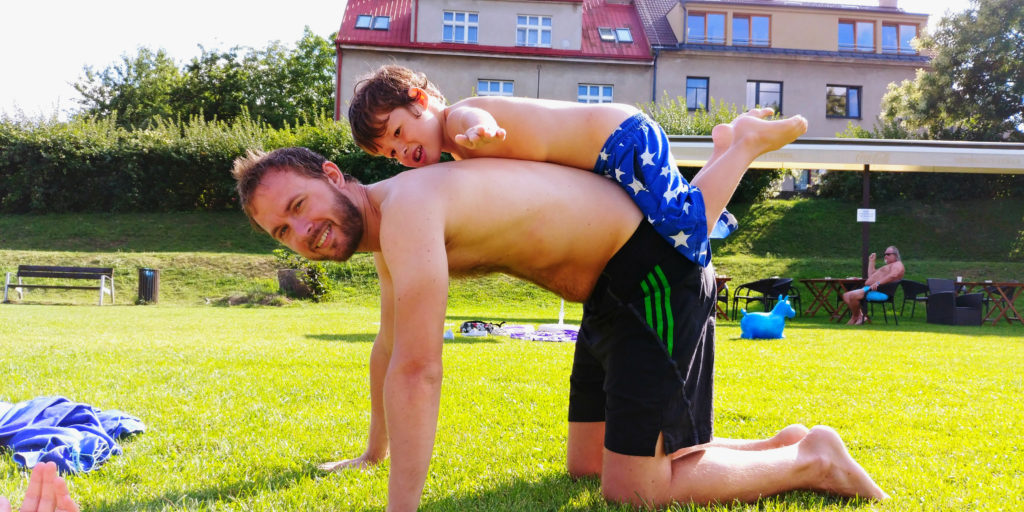 Pontus is useful when you want to be an airplane.

Henry want to compare his tummy with mom, whose is bigger? 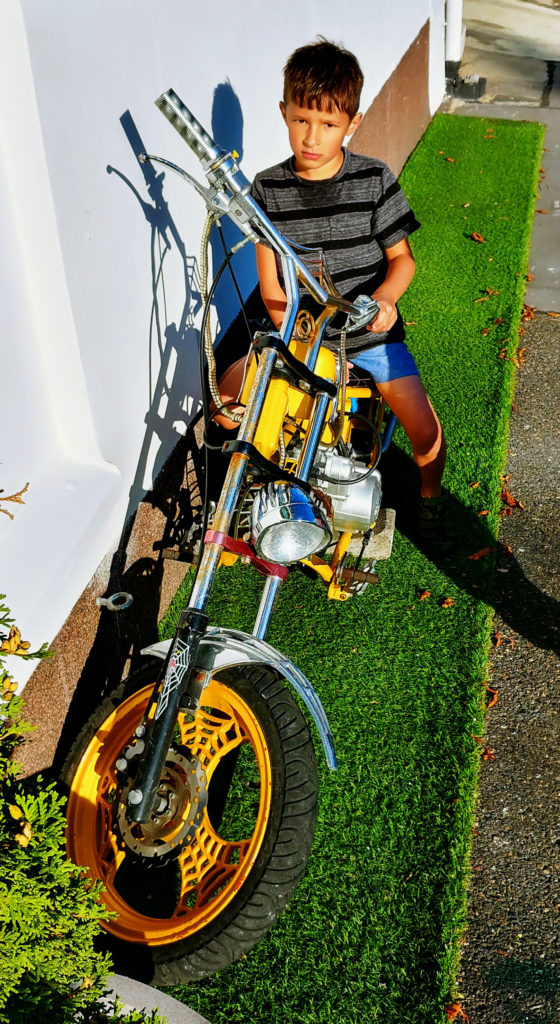 We found a child-size motorbike outside a restaurant, so the kids had to try it out. 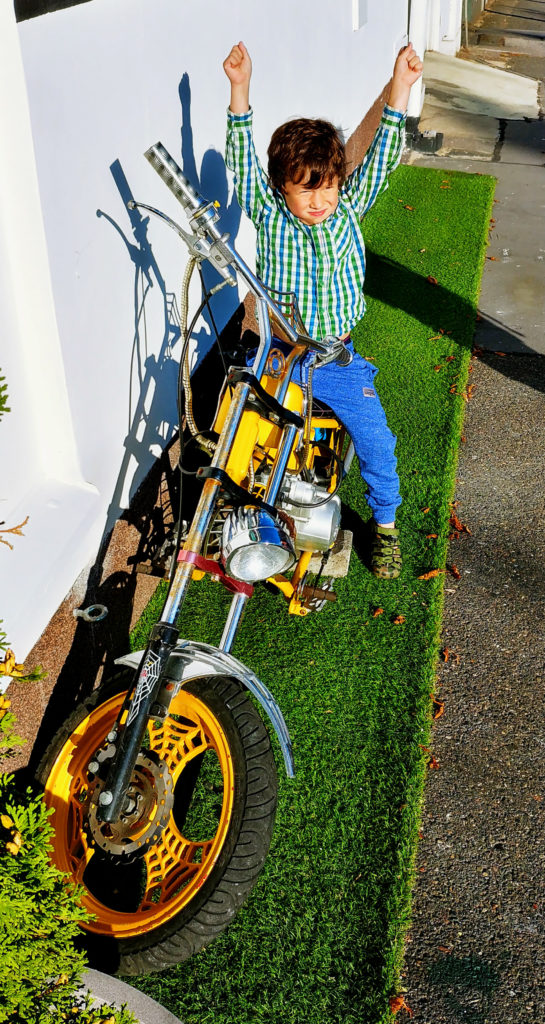 Henry a.k.a Daredevil, driving with his eyes closed and hands in the air. 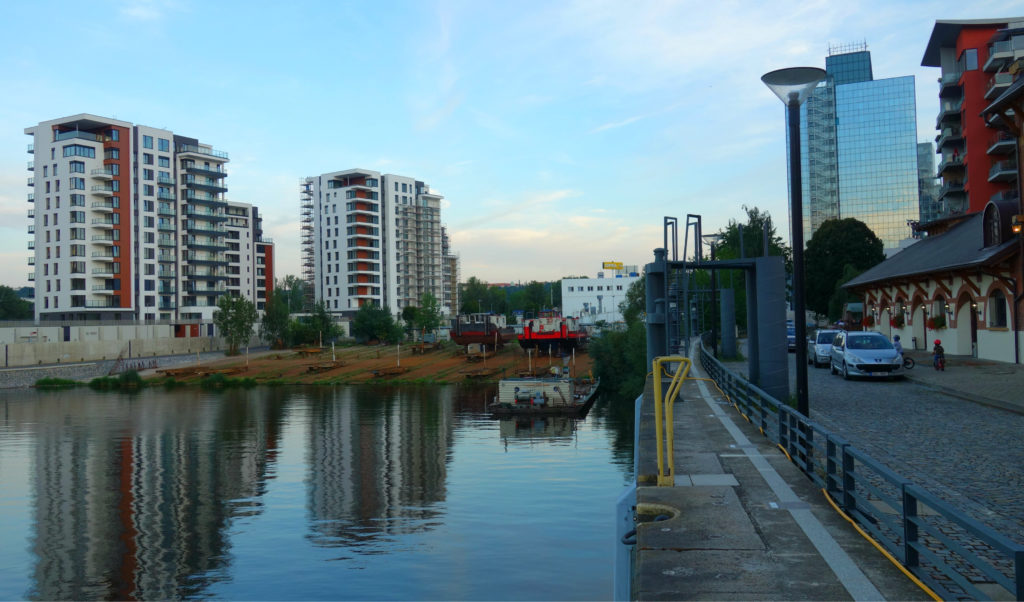 Pontus and I also explored Holešovice and surroundings, and found both a small harbor and an allotment garden. This part of Prague is really nice to explore by foot. More pictures can be found in the slideshow below. 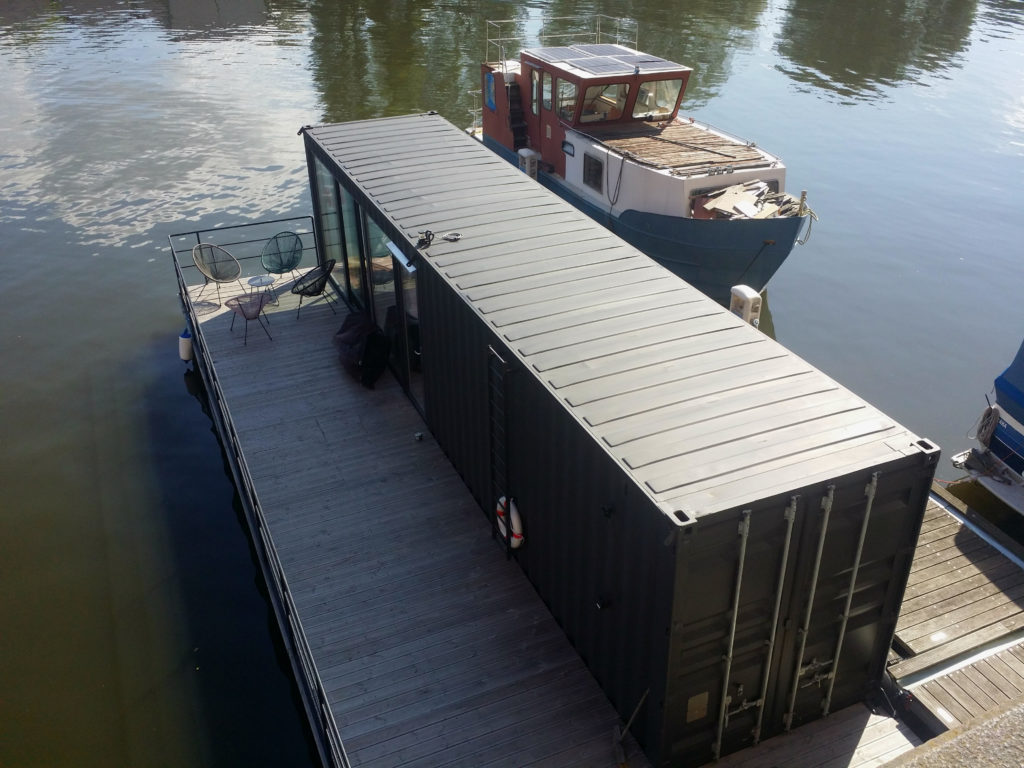 We found a floating tiny house, built with a container, along the harbor! It looked really nice! 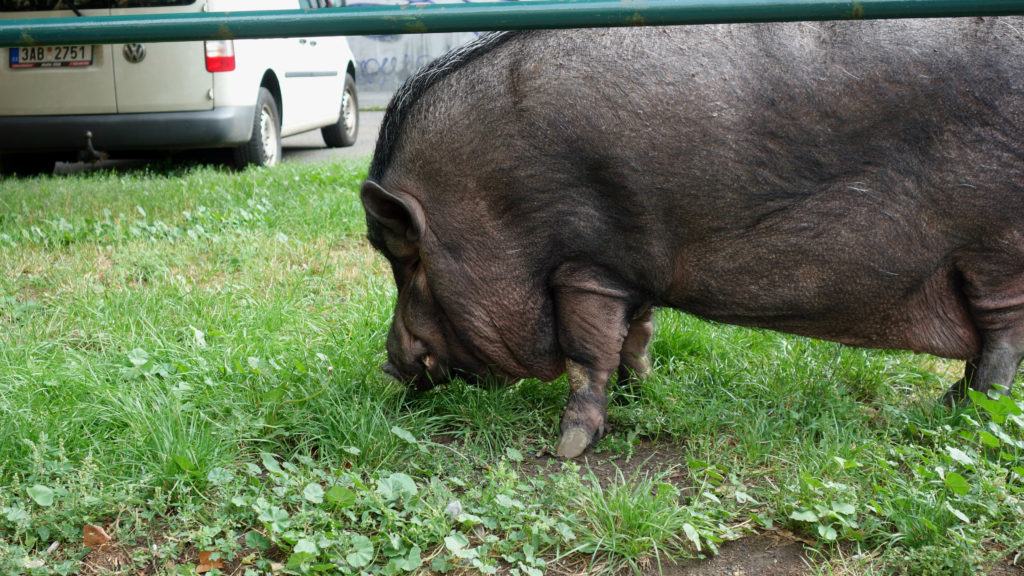 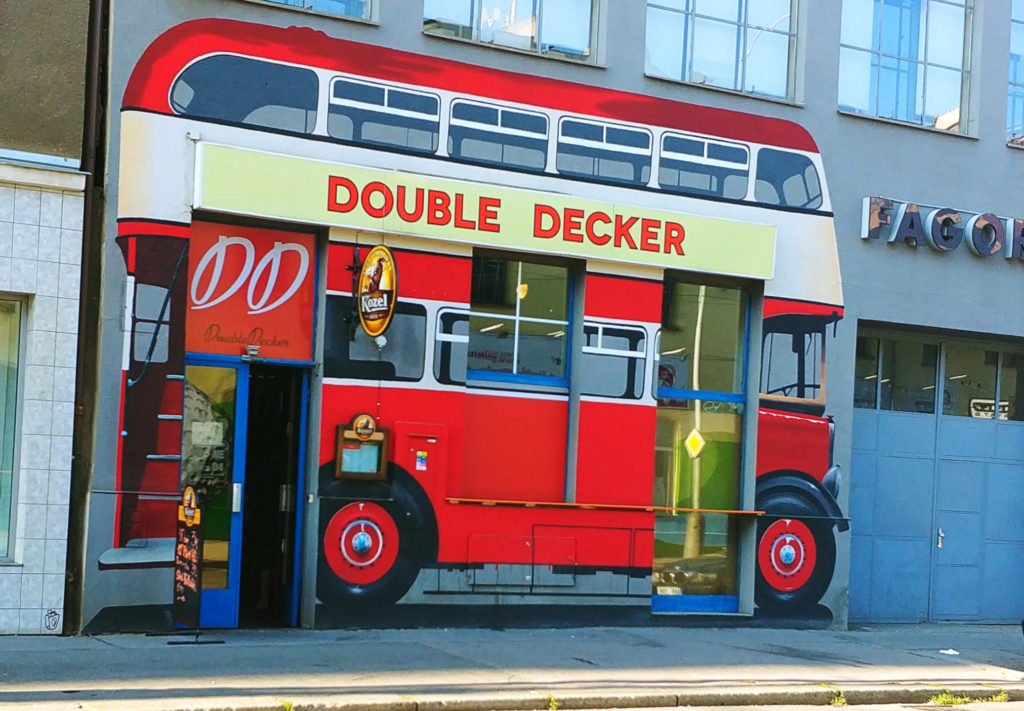 There are a lot of local pubs and restaurants here in Holešovice, this one stood out, but we didn’t try it. 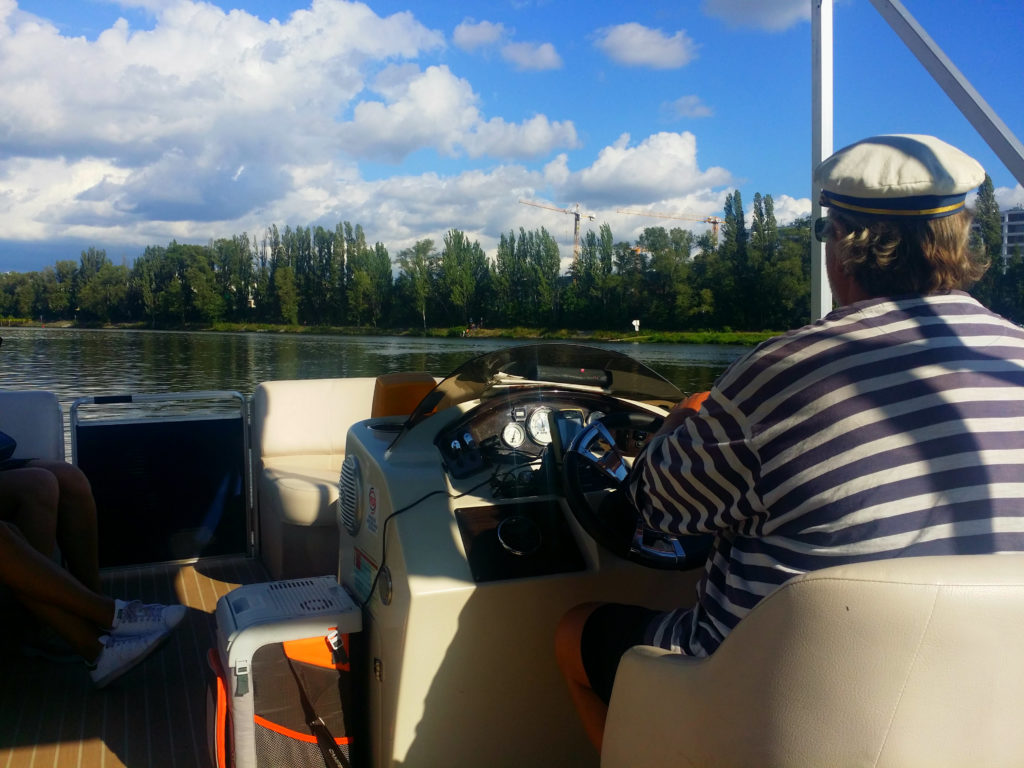 The public transportation system in Prague is so easy to use. There are subways, trams, buses etc to get around here. There is even a small boat called P7 that you can take, which goes between Holešovice and Karlín. 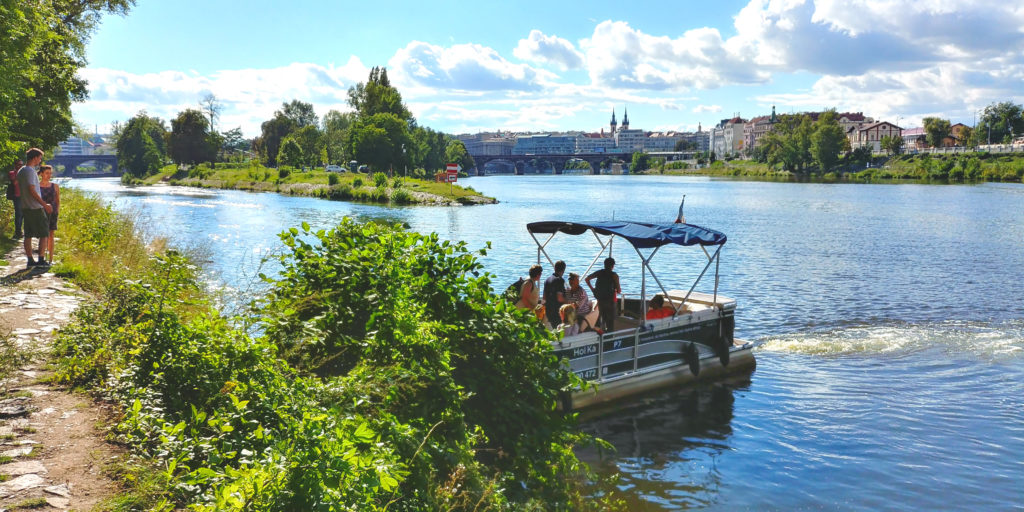 The P7 boat that took us over the Vltava river. The island Štvanice can be seen in the background. 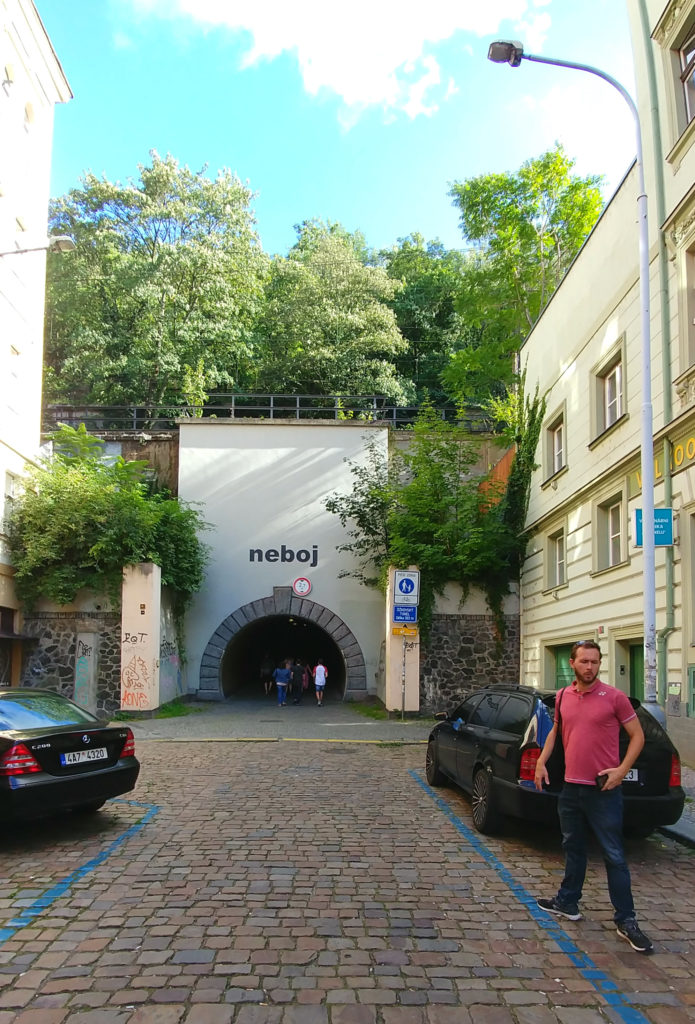 The King family had described for us how to find the tunnel under the Vítkov hill, and we found it! Now it was exploration time. 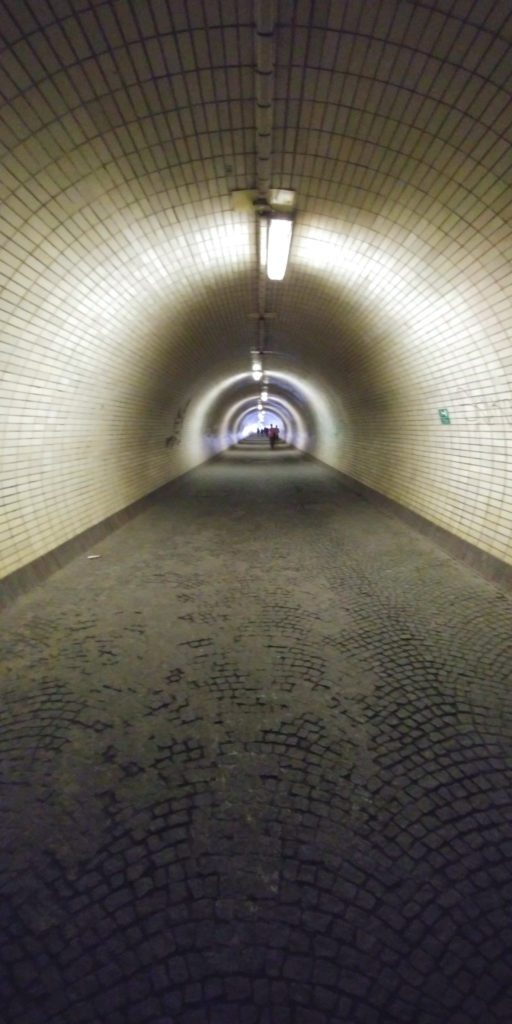 The tunnel goes straight through the hill and we wondered if this was some kind of bomb shelter during the wars. 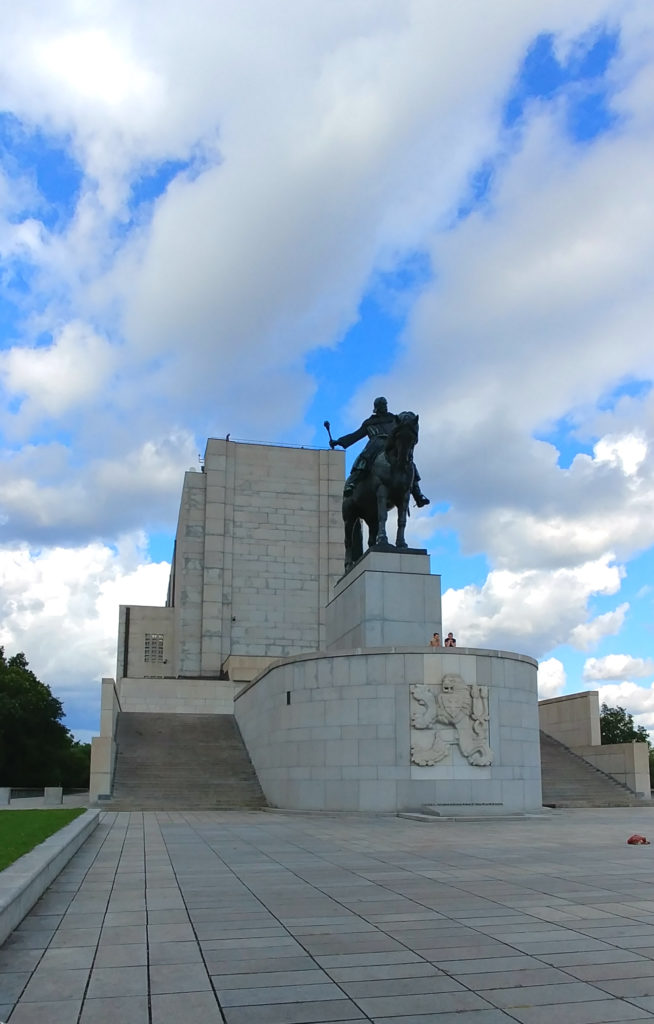 We found the National Monument on top of Vitkov hill and it was an impressive building built between the world wars in honor of the Czechoslovak legionaries. It was then used to promote and glorify the Communist regime after the second world war ended. Since 2009, the building has been reconstructed to be a National memorial site. 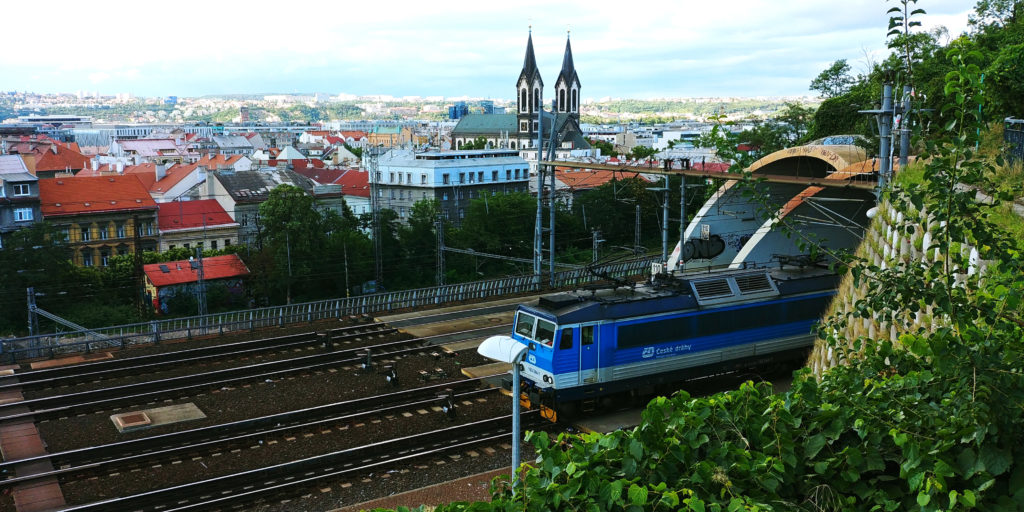 We got a great view over Prague from Vitkov park. Below are more pictures from the park and Holešovice. We walked more than 10 km this day, so we got to see a lot of interesting architecture. 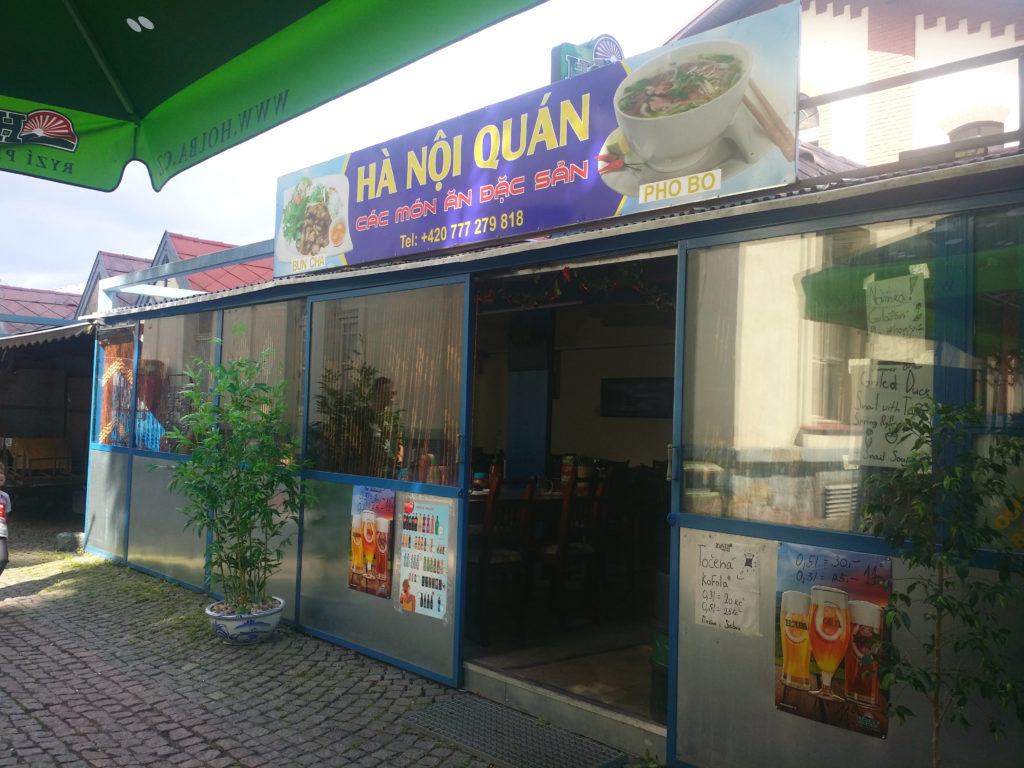 You’ll find a Vietnamese market in Holešovice where the Vietnamese community have their businesses. Social engineering during the communist years had Vietnam and Czechoslovakia to send people between each other, like a forced cultural exchange. We heard that most Czech people moved back to this part of the world after the communists were removed here, but the Vietnamese decided to stay, go figure! We love Vietnamese food so we loved going here to eat. 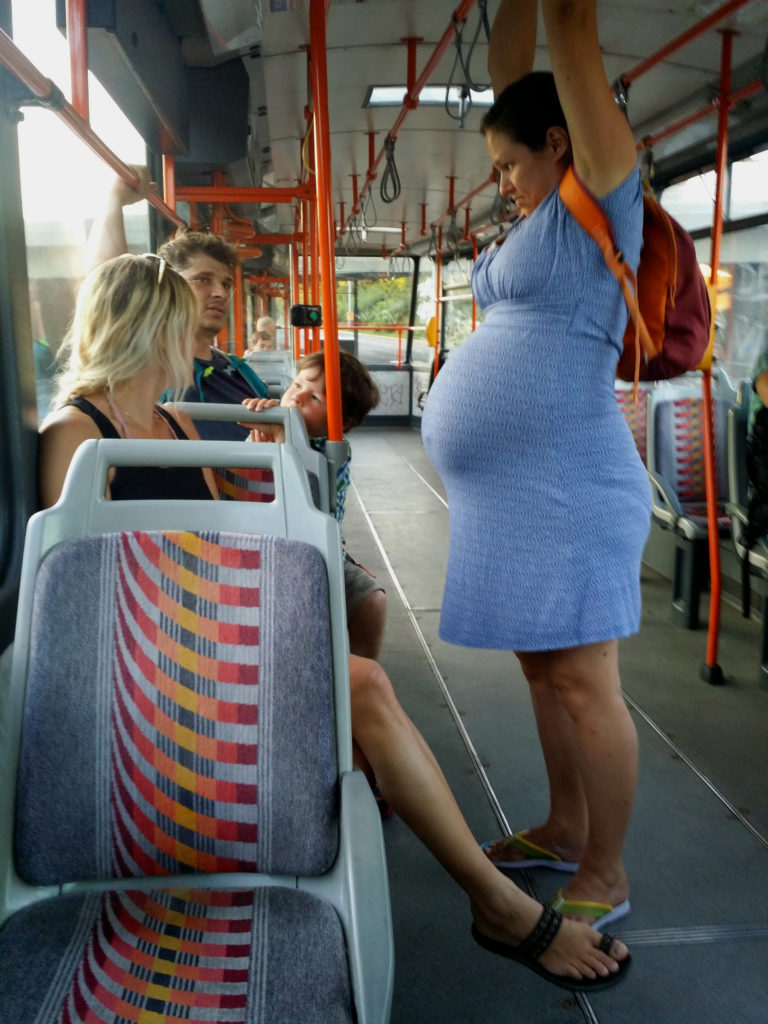 We hanged out and did a lot of things during these weeks, but most of the time we were just patiently waiting for the fifth member of the King family to join us. More about that later!