Our first time in Berlin

From Dubrovnik to Berlin, in a month we had managed to travel south to north across Europe and our focus was to visit old and new friends. Berlin wasn’t in our plans from the beginning, but a certain sport retailer had us convinced that we wanted to go here. Why not try to see some of the historical grounds here in Berlin while we stayed here, we said to each other, so here are some pictures from Berlin! 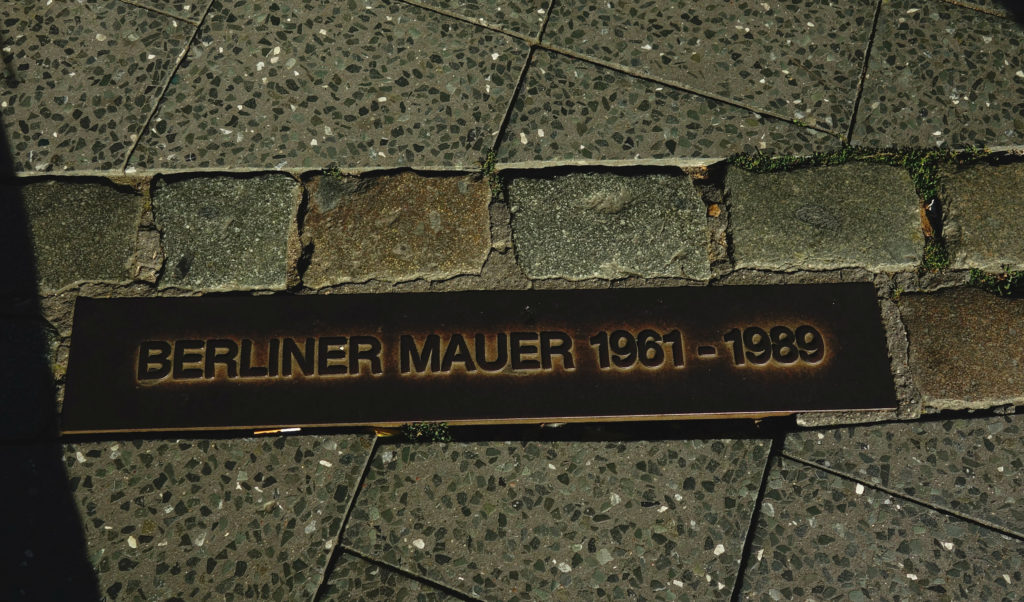 Our purpose in Berlin was not to explore the historical sites of the city, but we couldn’t resist to walk around one day and see some of the historical areas and Die Mauer was one of them. More about this day later.

First, it  was time to upgrade our gear and we went to Berlin solely for the purpose of visiting a Decathlon outlet. 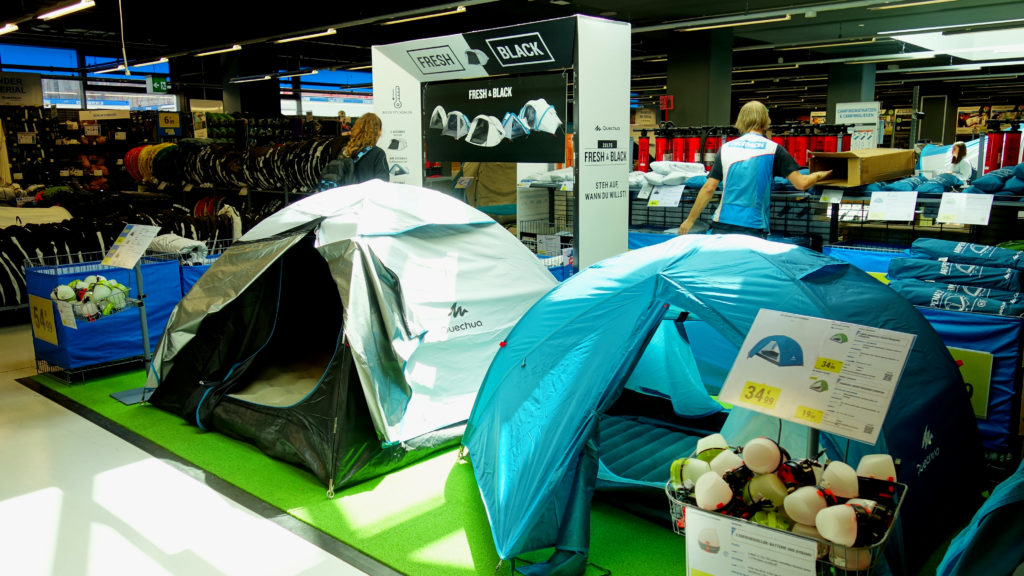 They sell everything from outdoor gear and ballet clothes, to scuba equipment, sailing and horse stuff, so this is the biggest sports goods retailer that we have visited. 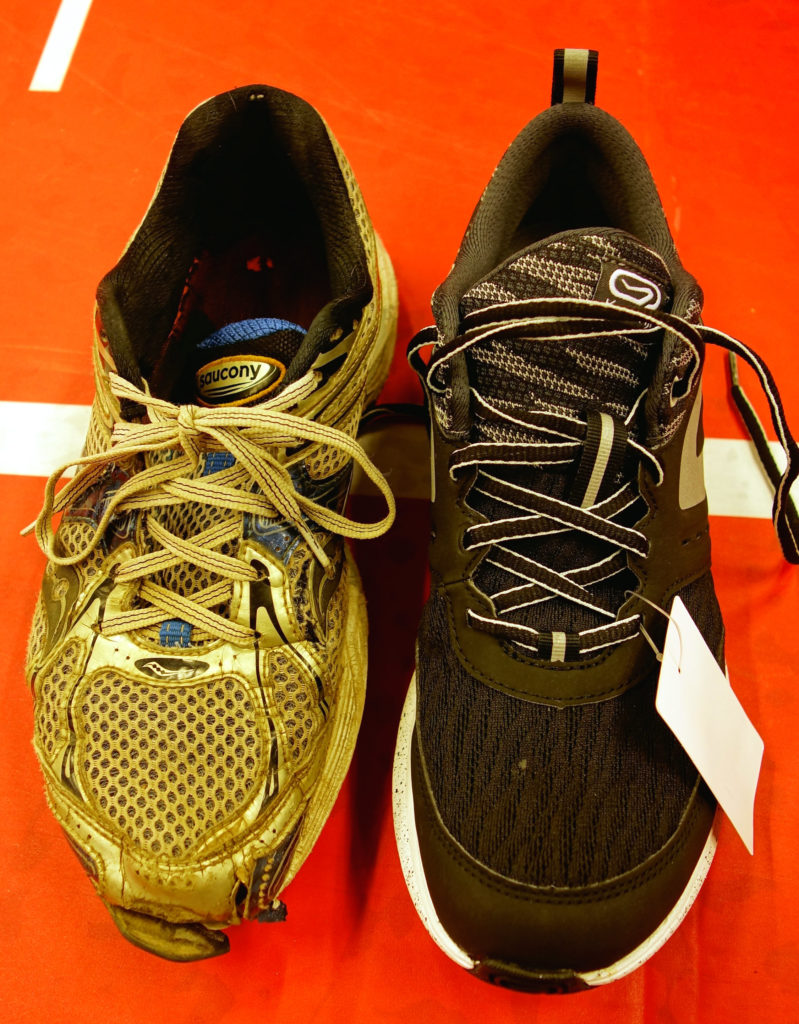 Pontus shoes needed to be upgraded, so say hell to a new pair of cheap, but qualitative, Kalenji sneakers. 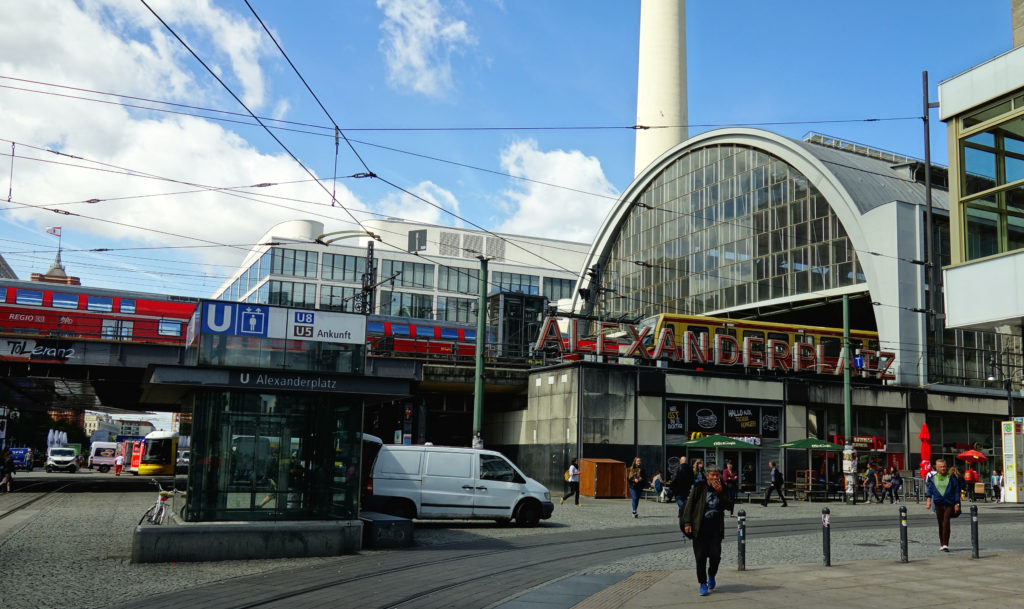 The Decathlon store we went to is located at Alexanderplatz, a large transport hub in Berlin. 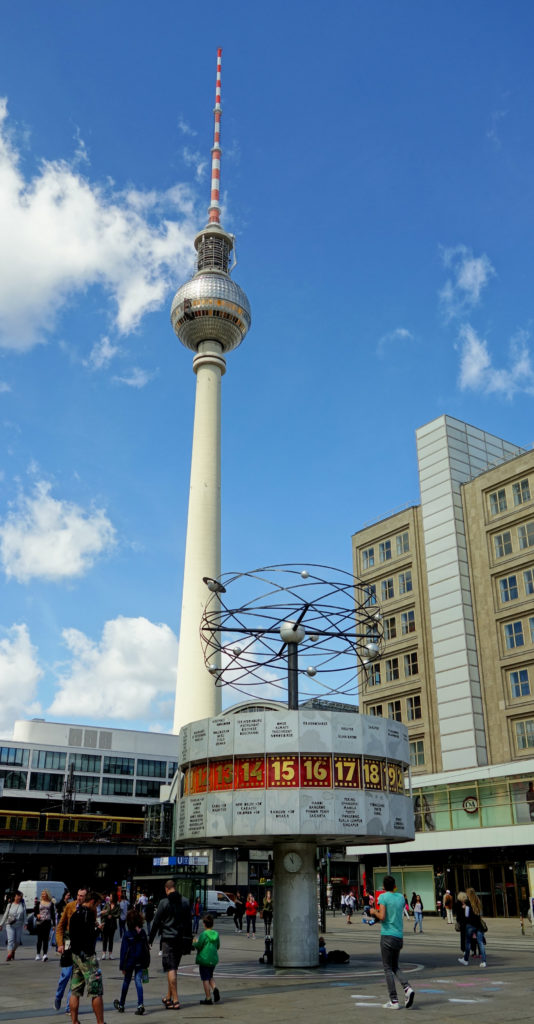 You get a good view of the Fernsehturm, a communistic propaganda building constructed between 1965 and 1969. The Ferneshturm was intended to be a symbol of communist power and of Berlin. 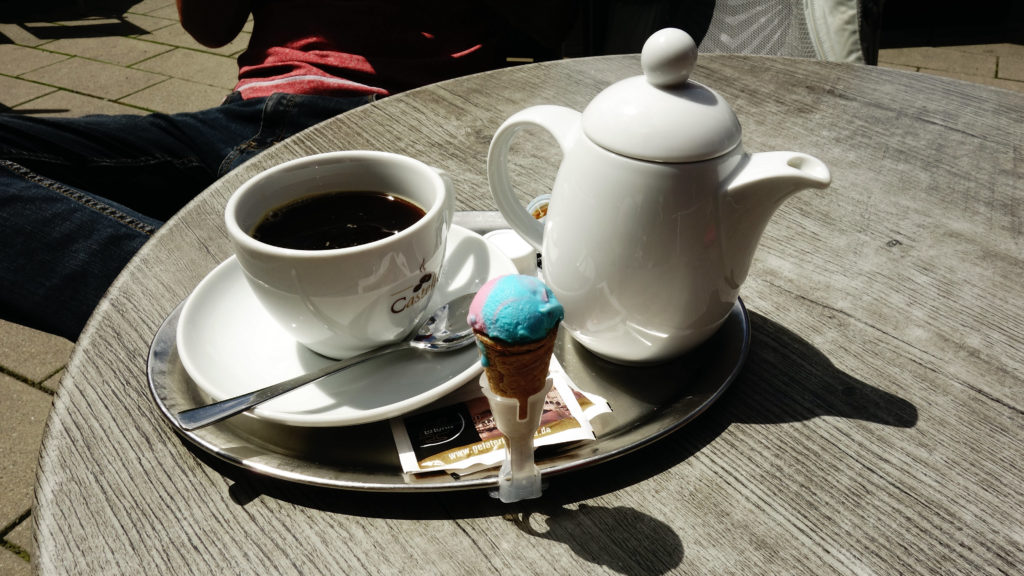 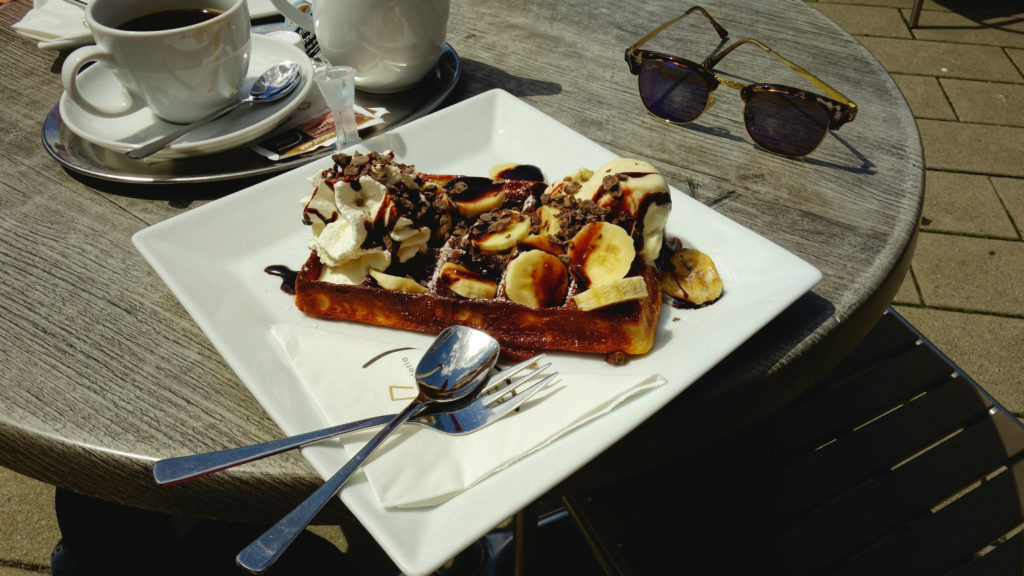 and waffles that got our sugar levels spiking. 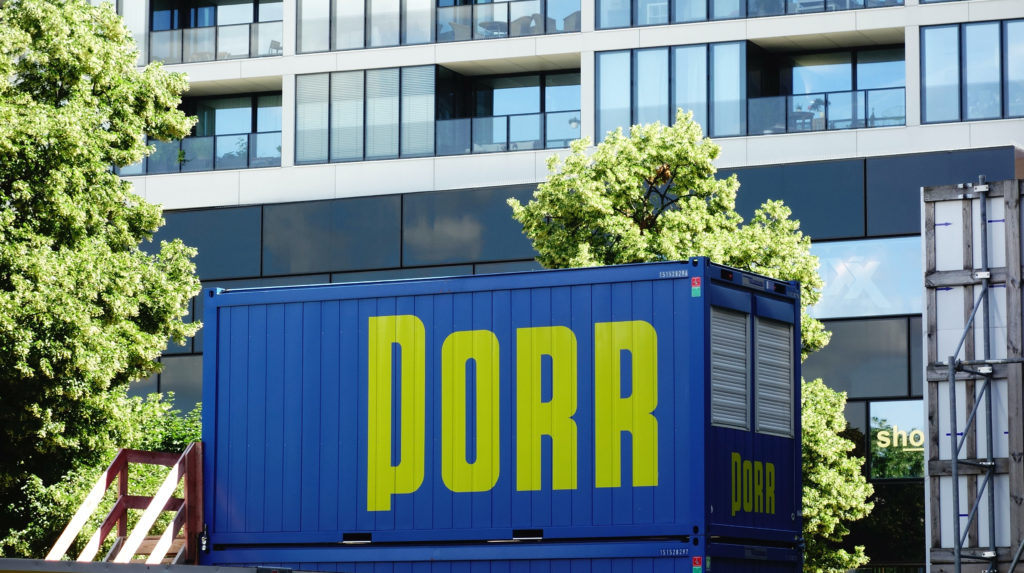 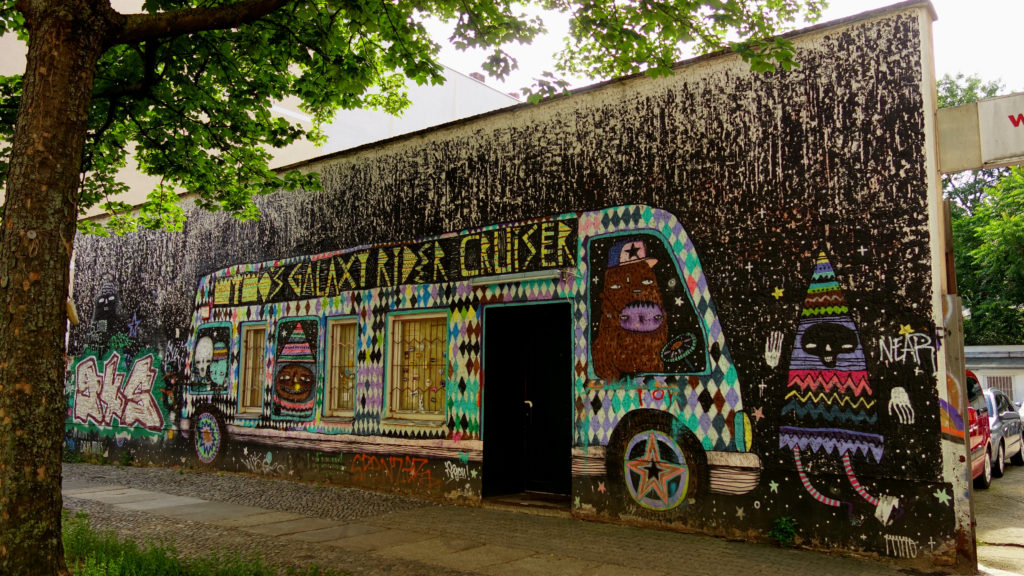 We lived in Friedrichshain, a part of Germany that was severely damaged during the second world war, because of the Allies heavy bombings on industrial buildings that were located in Friedrichshain. After the war, the Stalinallee was built in this neighborhood and  Friedrichshain was the cultural center of East Berlin. 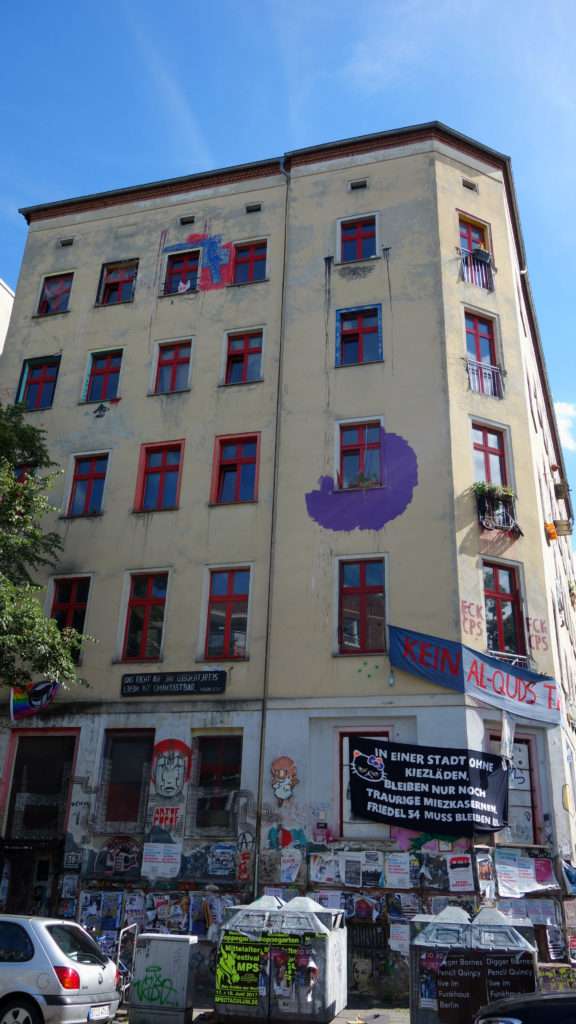 After the Wall fell, a lot of apartments stood suddenly empty here in Friedrichshain and this attracted the attention of squatters, which can still be found here today, 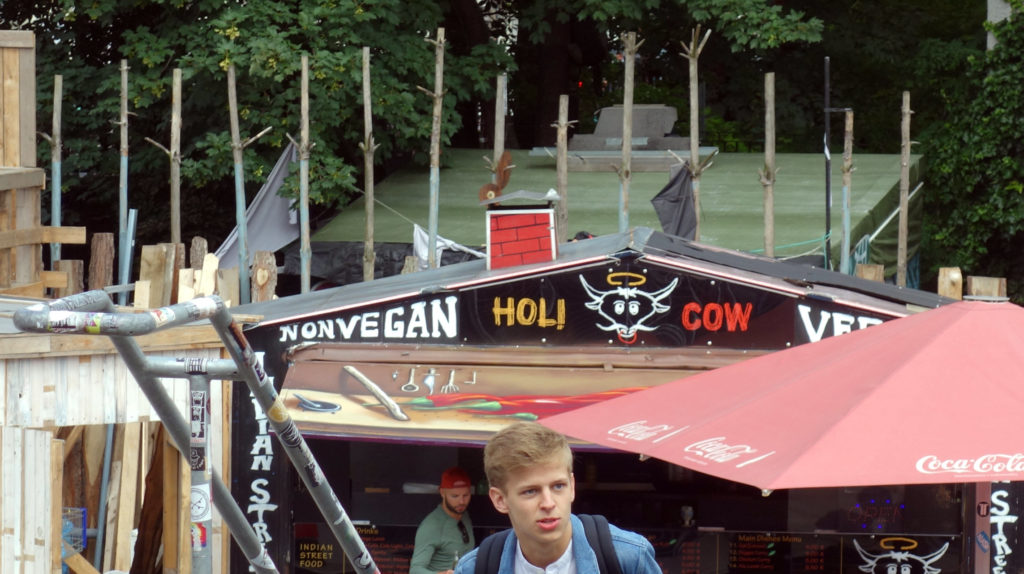 There are a lot of vegan alternatives in this part of Berlin, so it was special to find a non-vegan place. 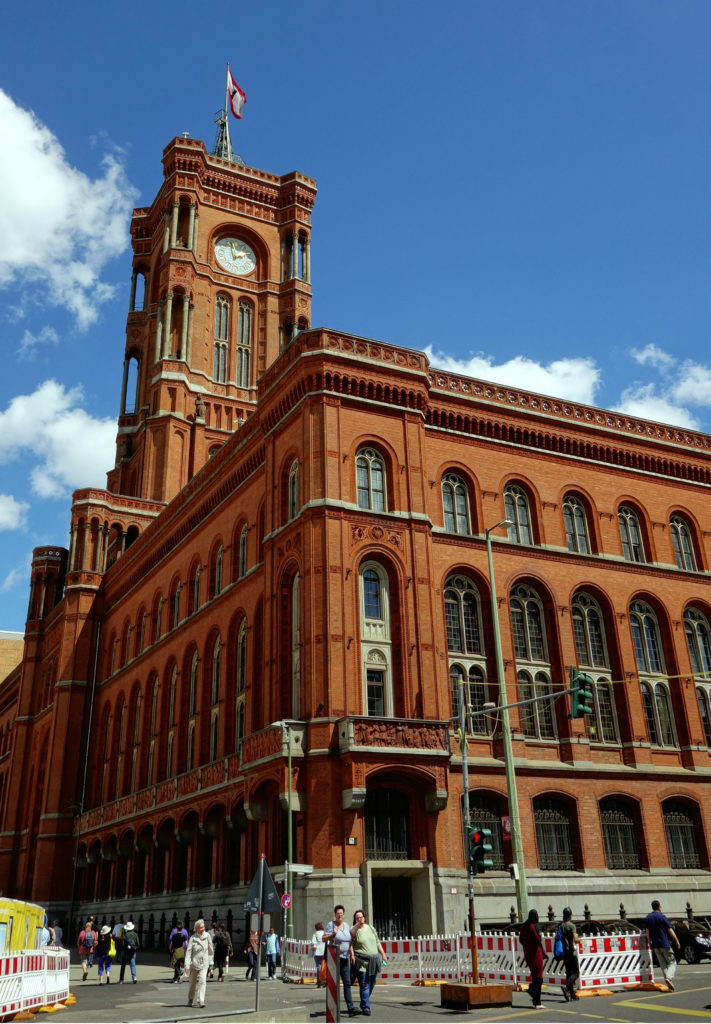 The last day we had gathered enough energy to spend a day walking around to different historical places and look at the architecture in the city. 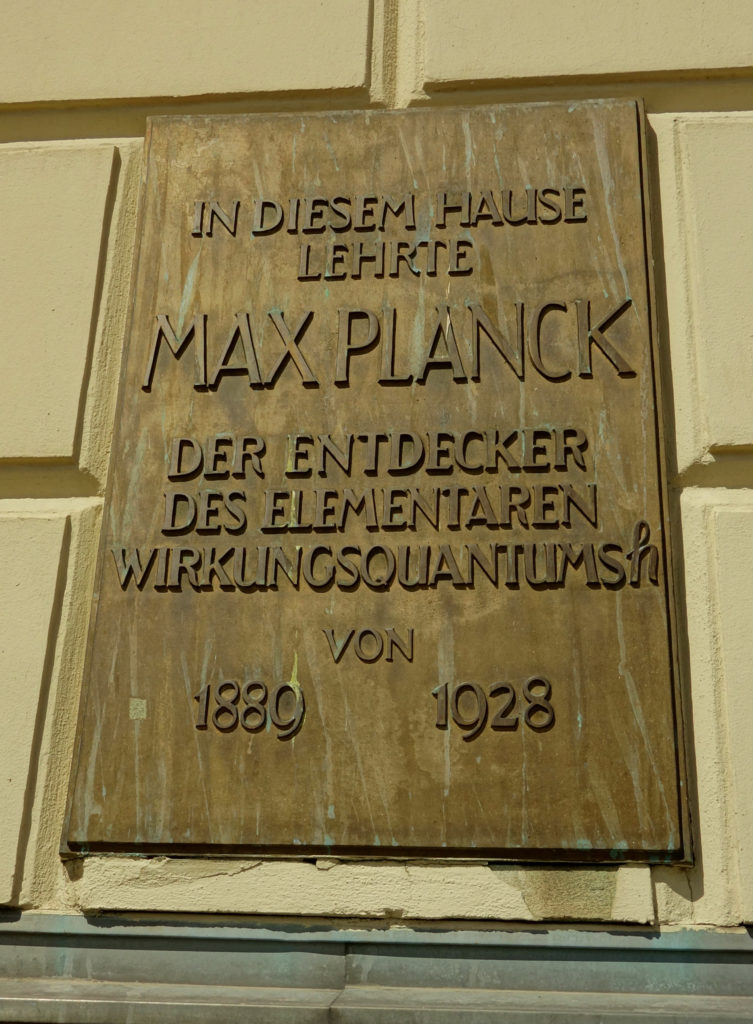 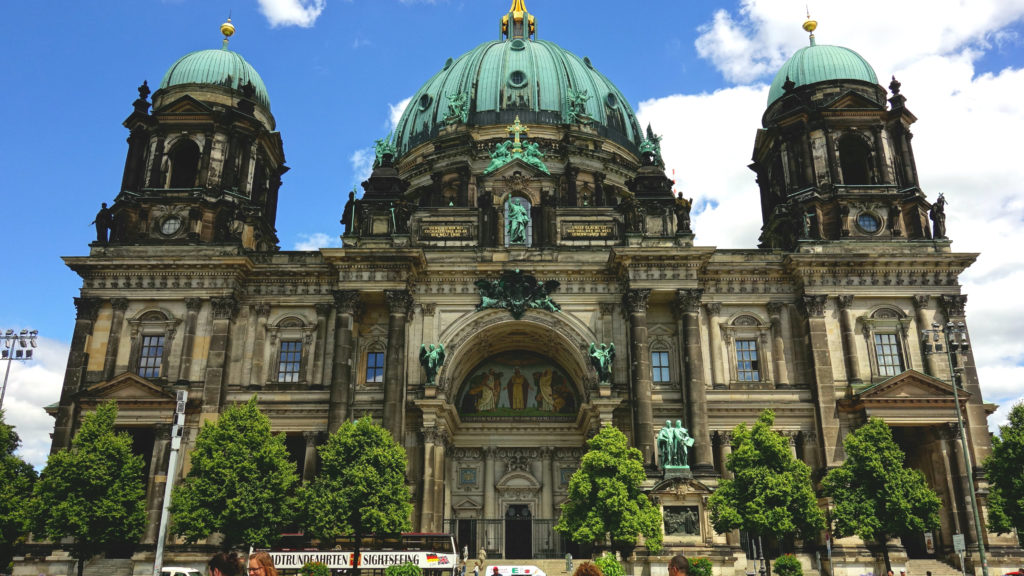 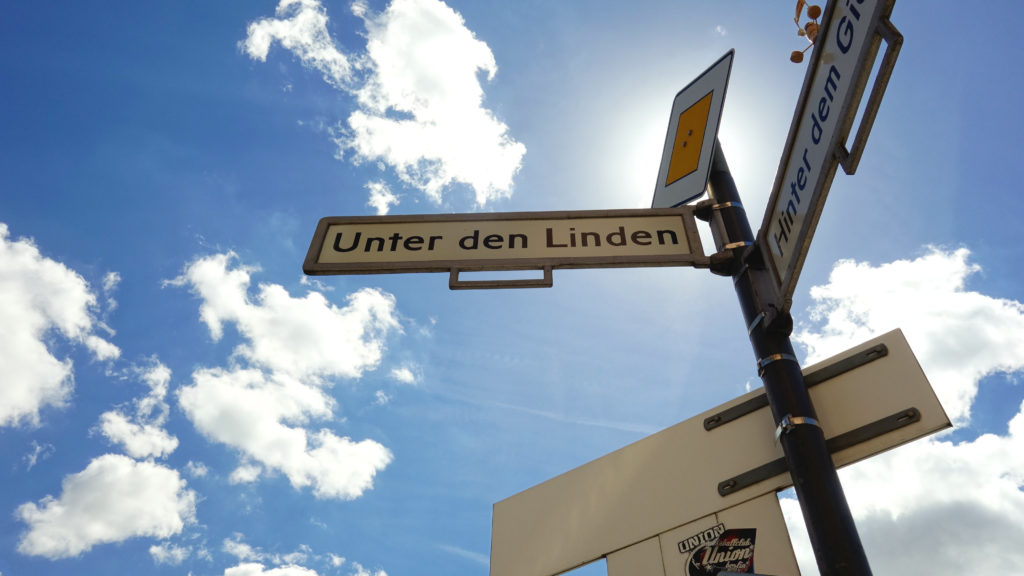 We walked down the historical parade street Unter den Linden, which was constructed by Elector John George of Brandenburg in the 16th century so he could reach his hunting grounds in the Tiergarten.

Unter den Linden starts at the Berlin Palace, a place that dates back to the 1450’s. 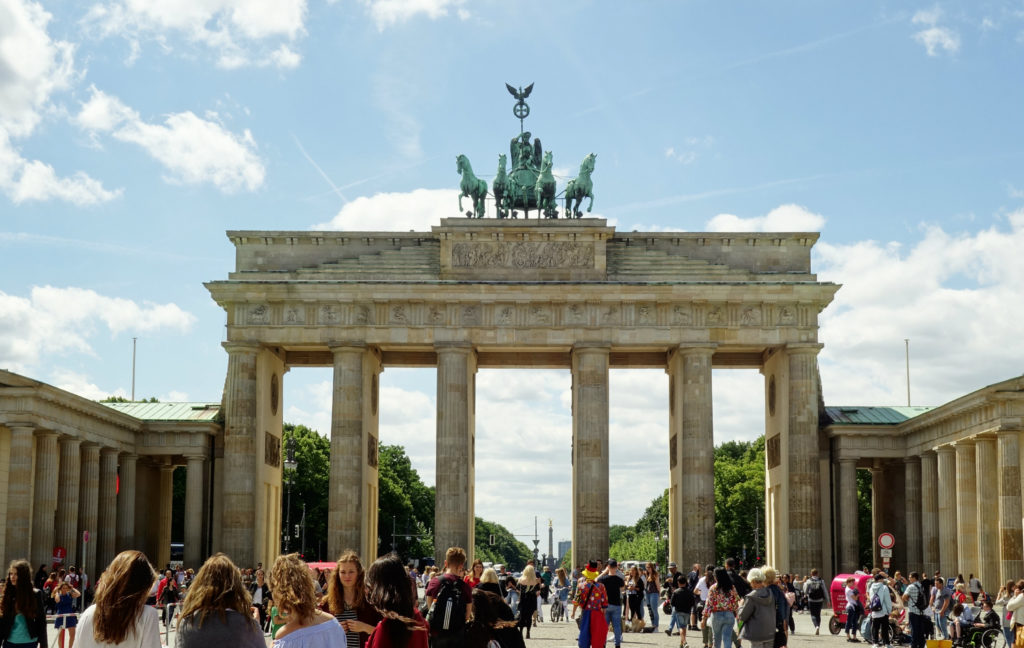 Brandenburger Tor, another historical monument that has meant a lot for both monarchs, Napoleon and the Nazi’s. 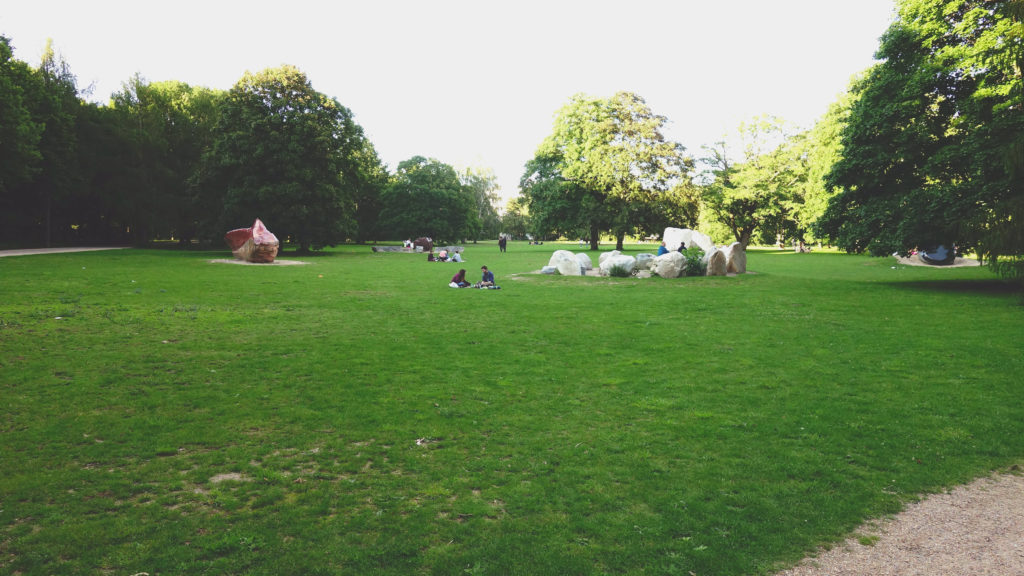 We visited Tiergarten, the big park in the middle of Berlin. This was the royal families private hunting grounds. In 1742 the fences around the park was torn down by Frederick II and the park was now open for the public. 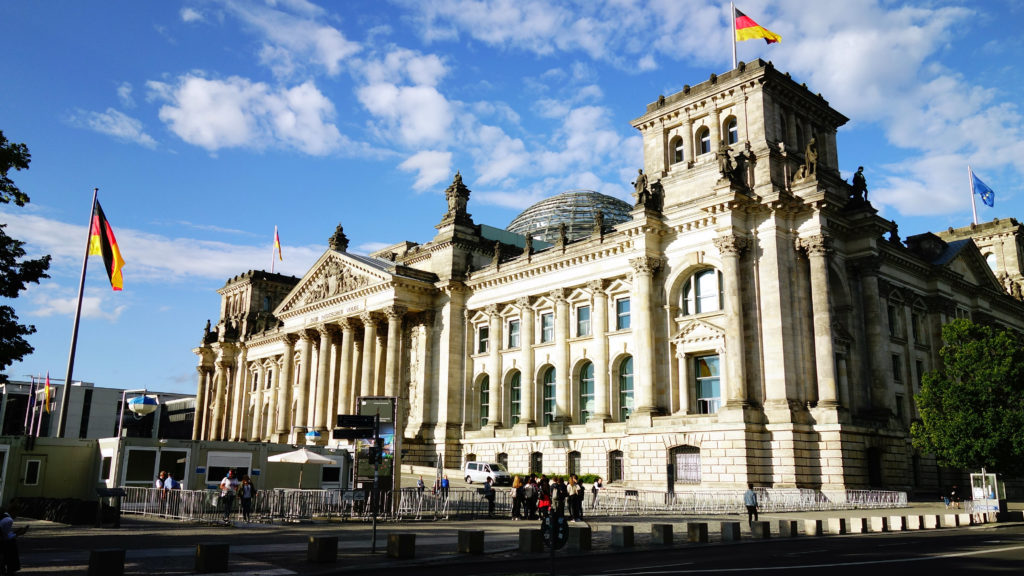 A short stop looking at the German Reichstag, which was constructed after the unification of Germany in 1871. 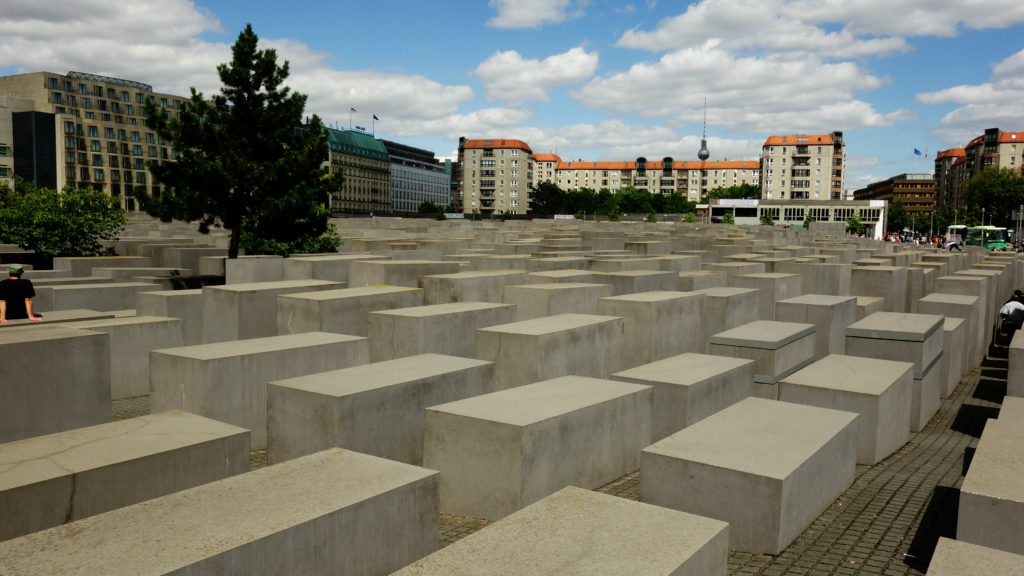 We passed the Holocaust Memorial. 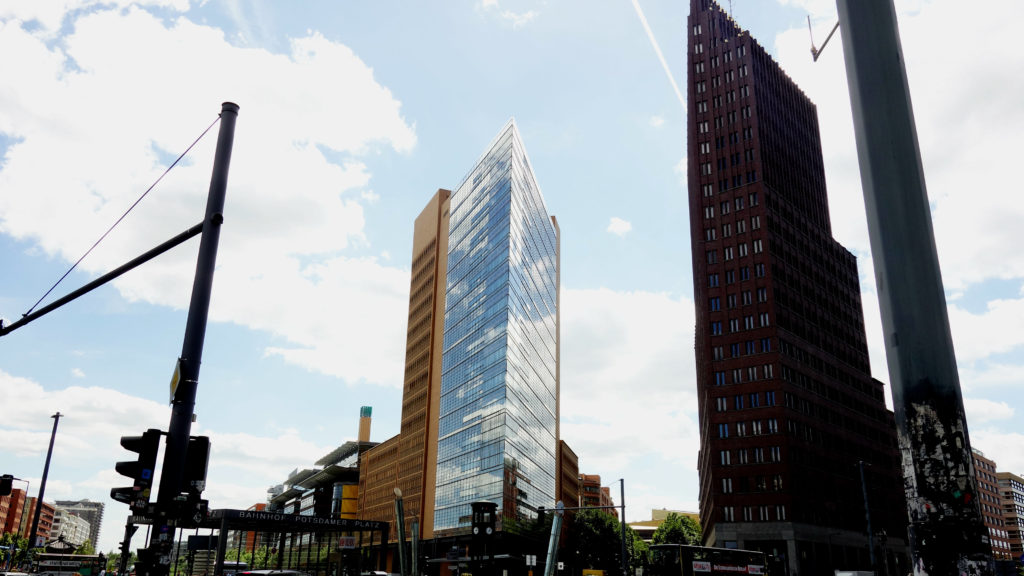 Potsdamer Platz, named after the city Potsdamer and the area marks the point where the old road from Potsdamer passed through the city wall of Berlin. This was a No-mans land during the cold war and Potsdamer Platz became one of the earliest points where the Berlin Wall was breached in 1989. 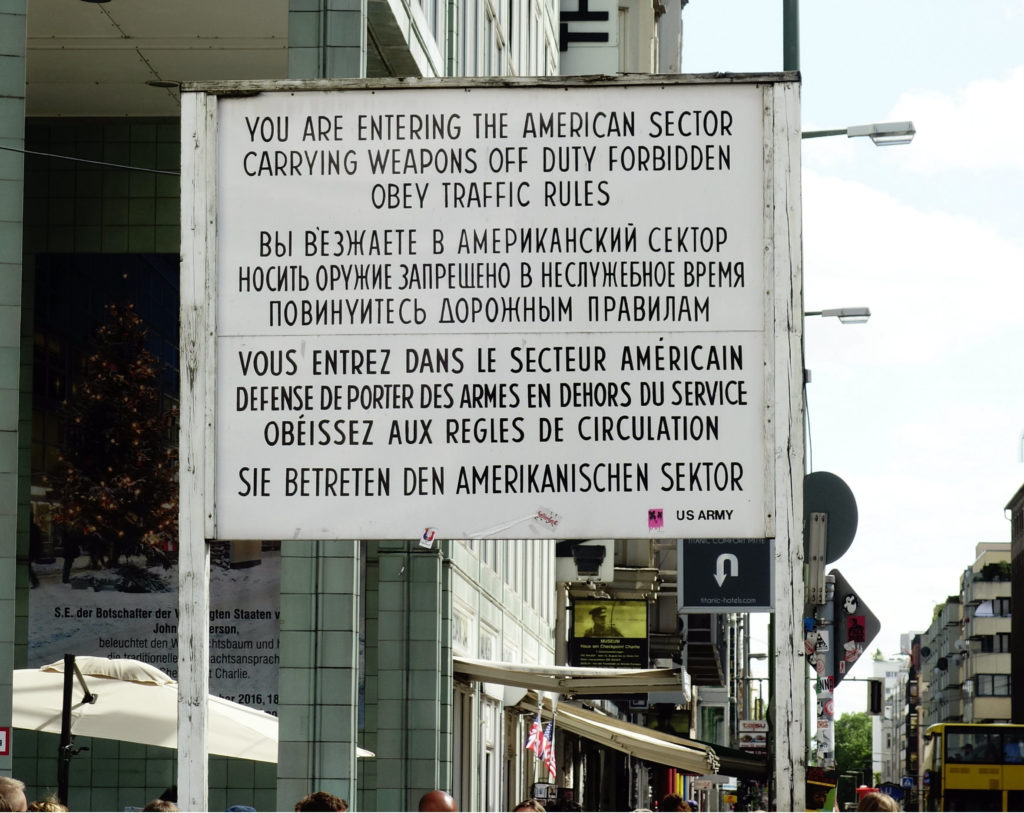 You’ll find Checkpoint Charlie, the most famous of border crossing checkpoints between East and West Berlin, near Potsdamer Platz, The Berlin Wall was built because of the heavy brain drain from East to West, between 1949 and 1961, over 2½ million East Germans fled to the West. This was so damaging to the political credibility and economic viability of East Germany., so they started to construct the Wall in 1961. 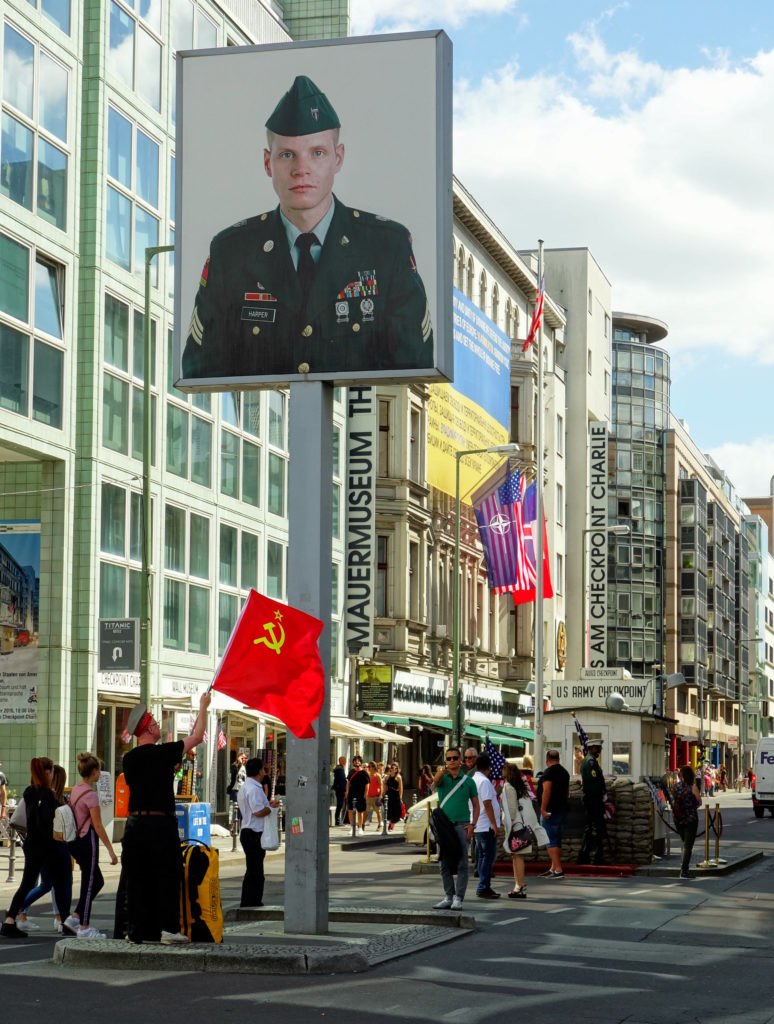 A standoff occurred between U.S. and Soviet tanks at Checkpoint Charlie soon after the Berlin Wall was built. The dispute was about if East German guards were authorized to examine the travel documents of a U.S. diplomat. 10 Soviet and 10 American tanks stood 100 yards apart on either side of the checkpoint for more than 24 hours. The standoff ended peacefully. 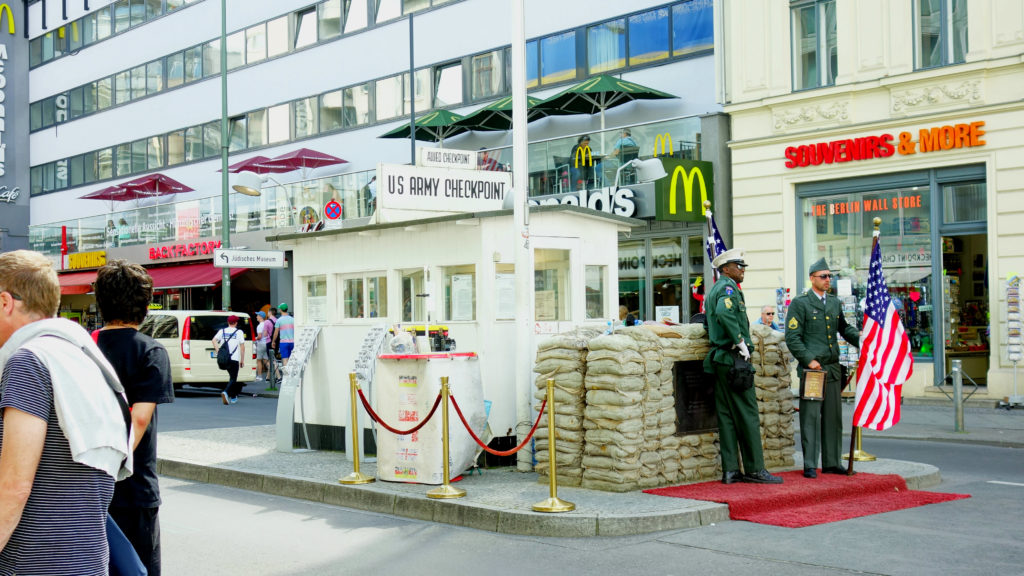 Love the placement of McDonald’s. 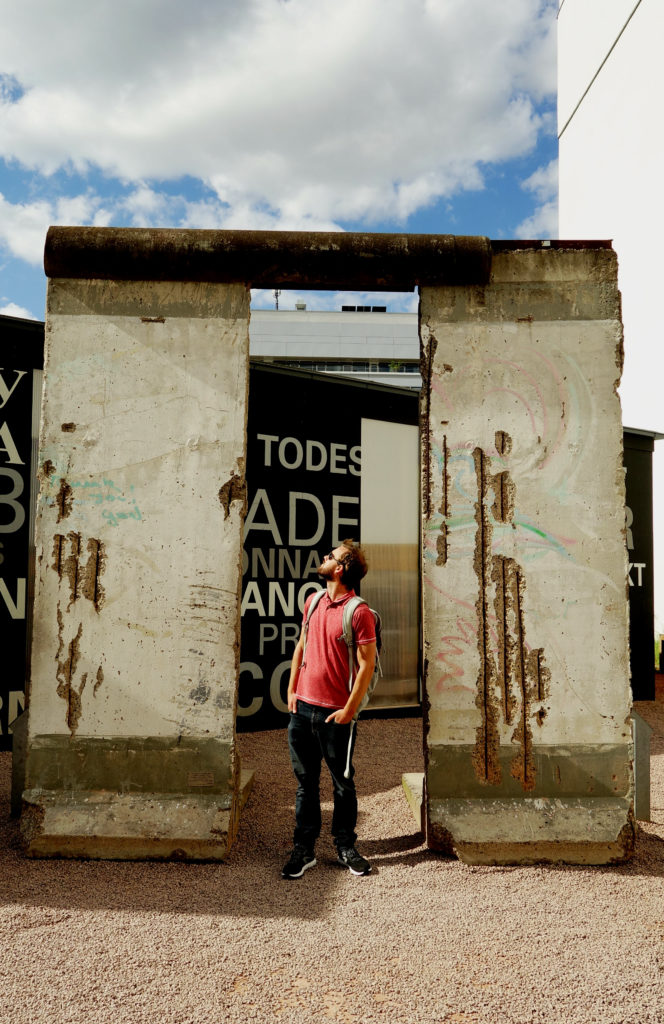 Pontus and Die Mauer – Next to Checkpoint Charlie lies a Wall museum where you can see a piece of the Wall, together with a lot of pictures and historical descriptions surrounding the history of the Wall. From the construction of the Wall and histories about both fatal and successful escape attempts, to the days when the Wall was torn down. 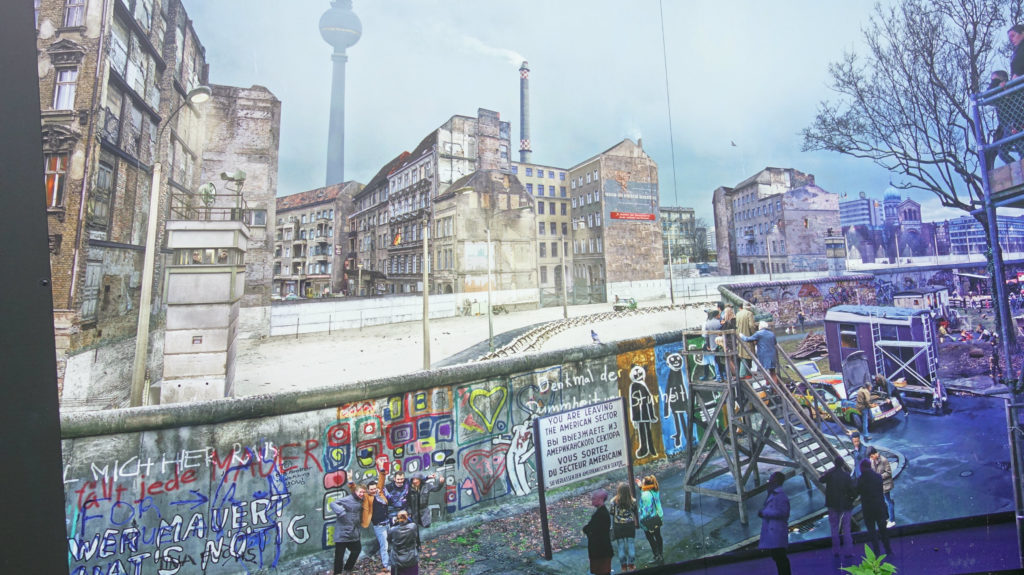 We found beautiful street art about this historical place around checkpoint Charlie, so it was nice just to randomly walk around here. Then it was time for us to leave Germany.