Little did we know that we would hike on one of the longest and most popular Klettersteigs in this part of the Alps, when we contacted Sandra and Markus to ask if we could visit them on our way through Europe.  Hindelanger had been on Sandra and Markus wish-list for a long time, so we felt honored that they chose to take us with them on this adventure. They are very active people, and they have a blog where they document their many adventures with amazing photos, check out their blog here, where they also wrote about our adventure together. Hindelanger was the first of a few adventures they had in mind for our visit, so we will divide our visit to Riezlern on three different blog posts starting with this Klettersteig on 2200 meter above sea level. 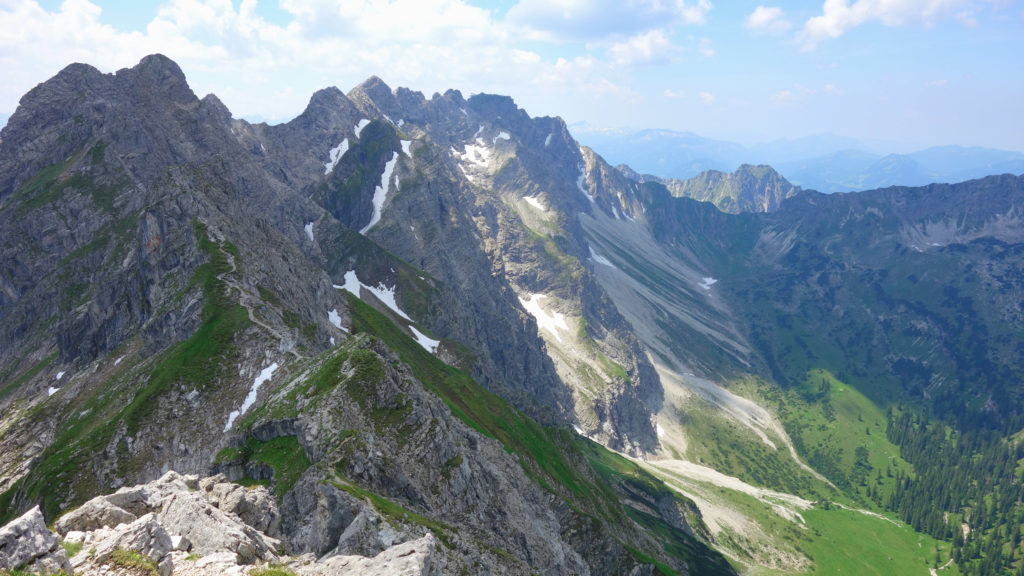 Hindelanger Klettersteig is a very popular via ferrata and it was Sandra and Markus plans for our first adventure during our time  in Riezlern. 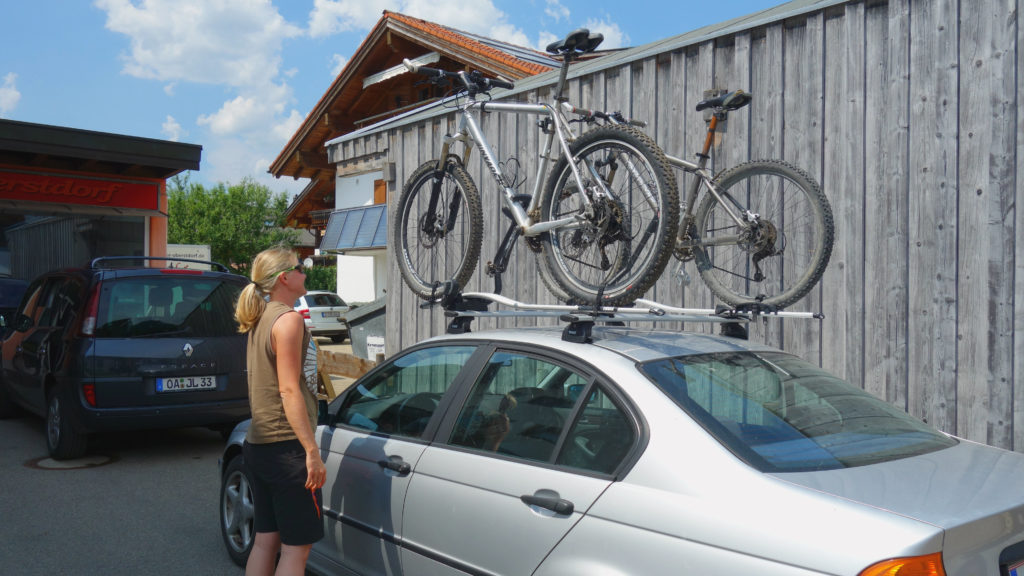 Sandra and Markus picked us up in Kempten Allgäu, Germany, after our train ride from Graz, Austria. It has been several years since we visited them last time, so it was time for a new visit. We picked up their old bikes from service on our way back to Austria, since they also had mountain bike plans for us during our stay with them. 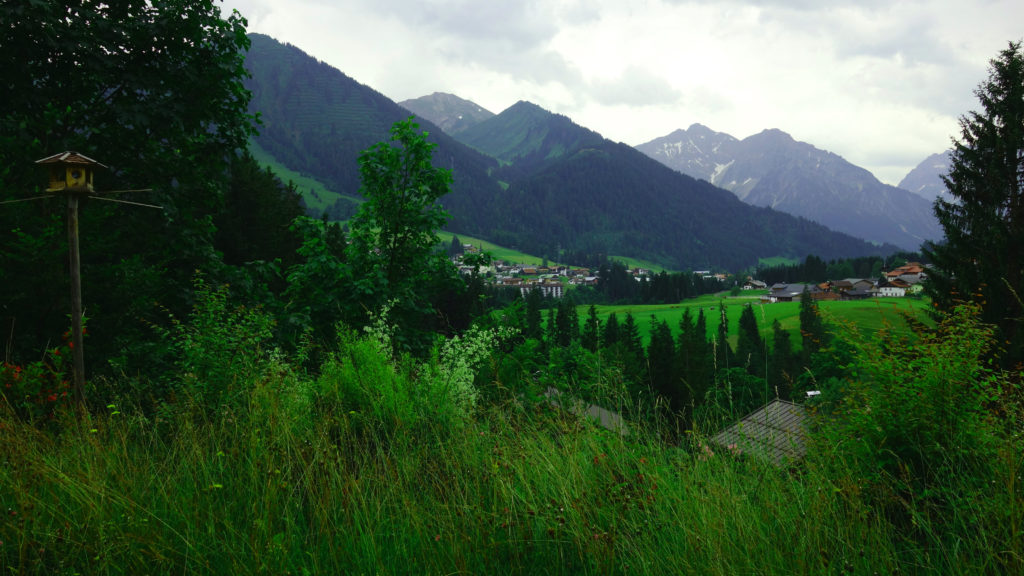 Sandra and Markus place, where they call home. They are really active people so this is a perfect spot to have a home for them! 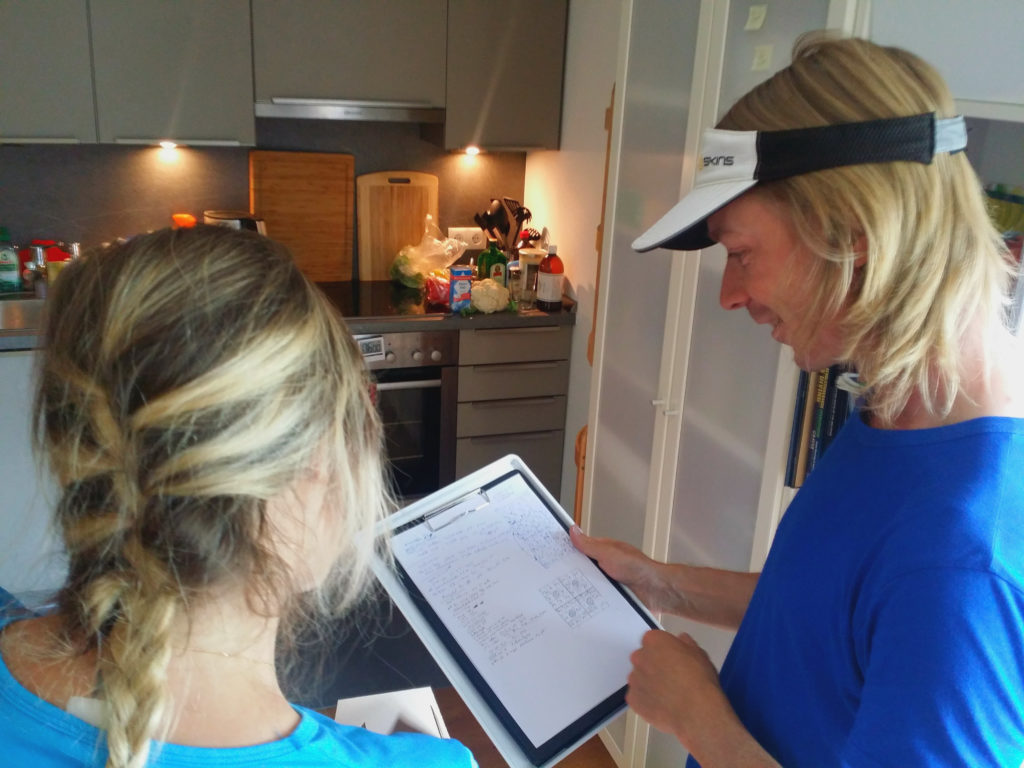 Markus showed us his automated hydroponics project and he is doing it thoroughly. 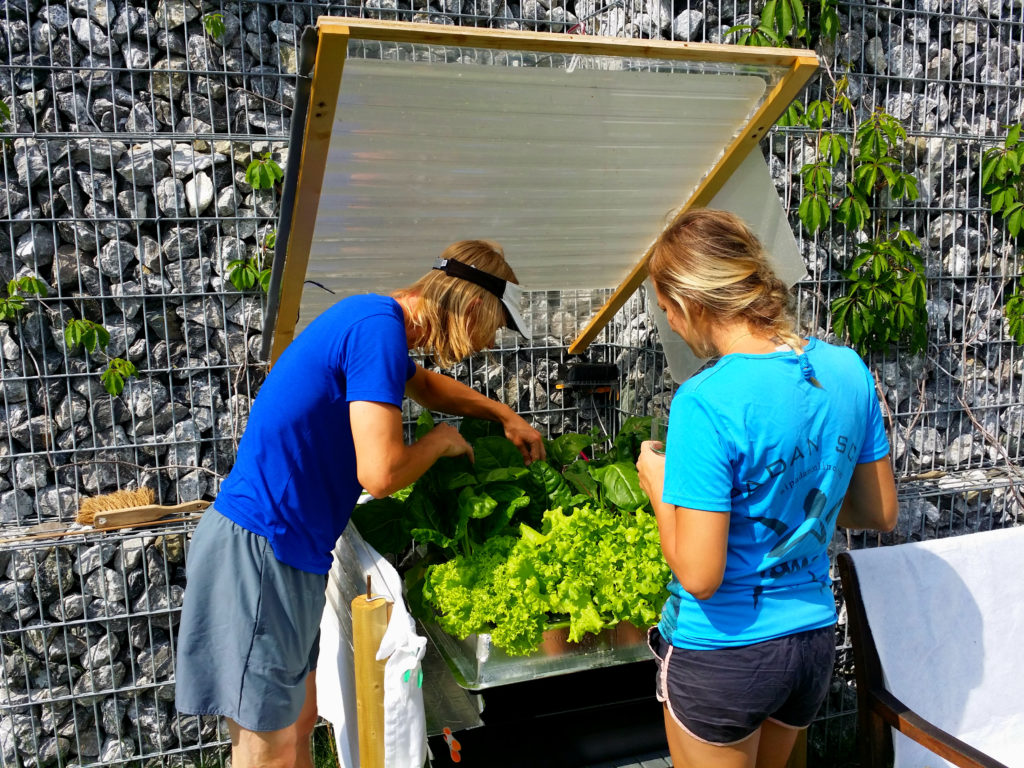 Water supply, humidity, nourishment and temperature is monitored and automated, and Markus has built and programmed everything by himself. 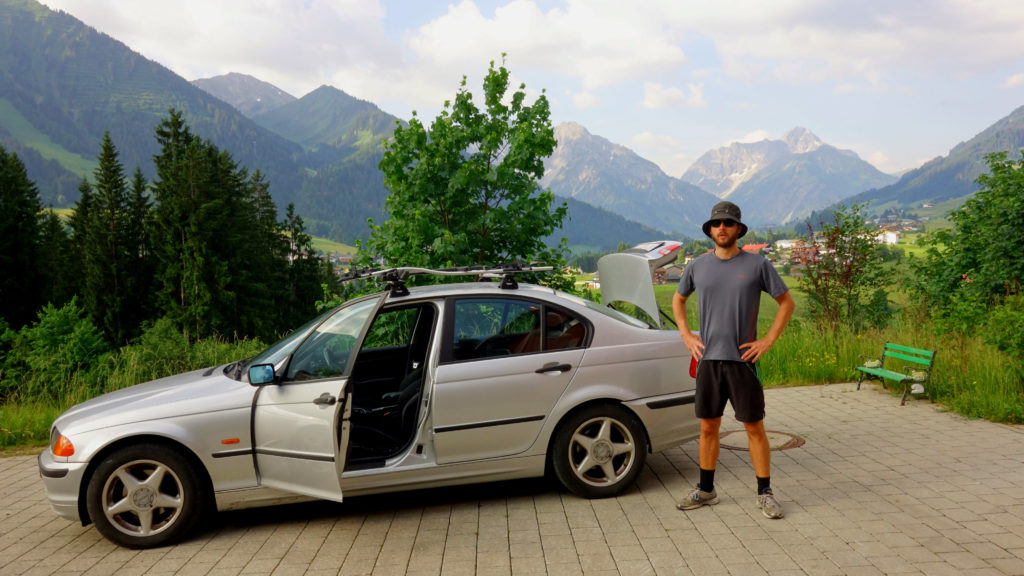 We started early the next day and it was time to tackle the famous Hindelanger Klettersteig. 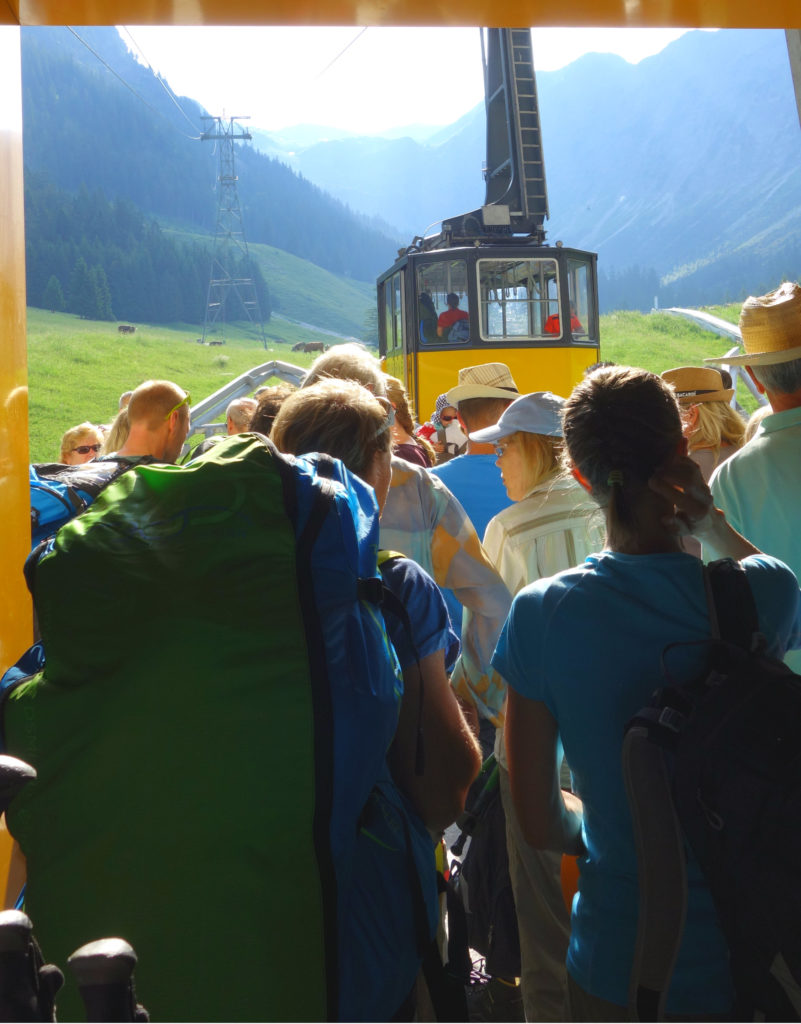 The first mission is to get to the top of Nebelhorn, 2200 meters above sea level. You can hike up to the top, but it is preferable to take the cable cars, three of them, up to the top. You can purchase both one-way and two-way tickets, if you don’t want to hike down the mountain.

The Hindelanger Klettersteig starts from the top cabin at 2224 meter above sea level. 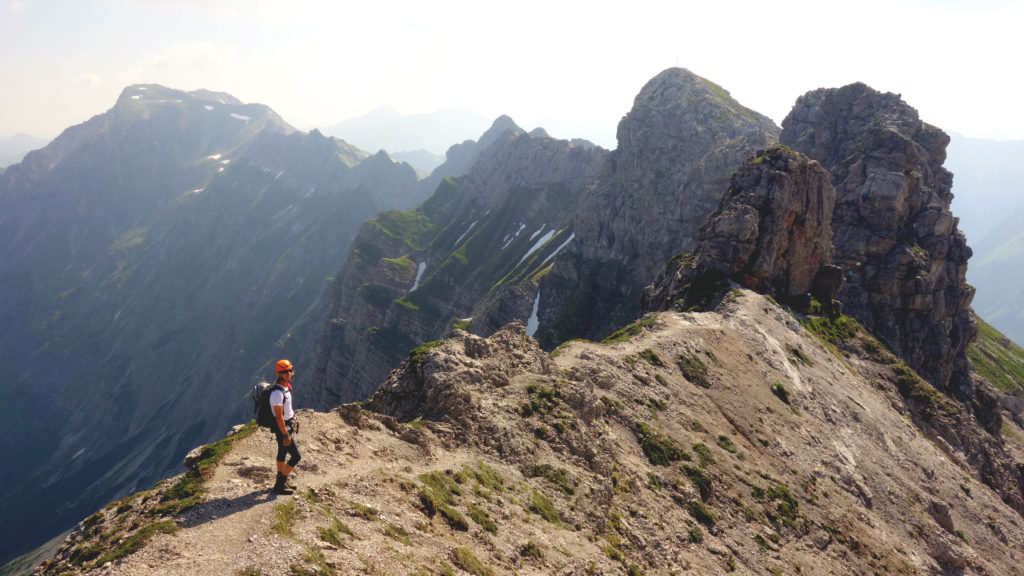 The ridge that we would spend the next five hours climbing up and down on. 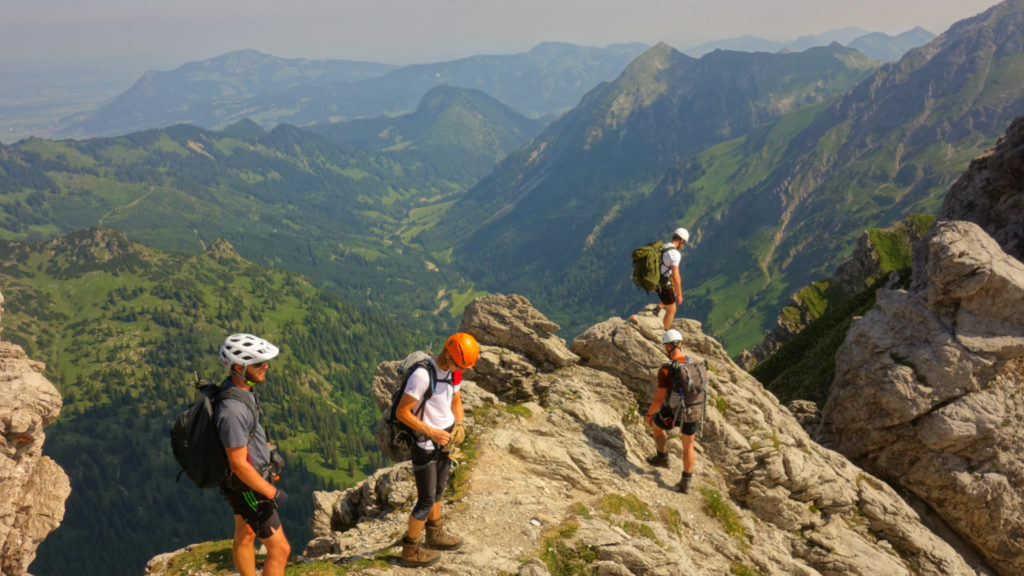 The mission was to get to the Gosser Daumen, the green top to the right which is visible in the background. 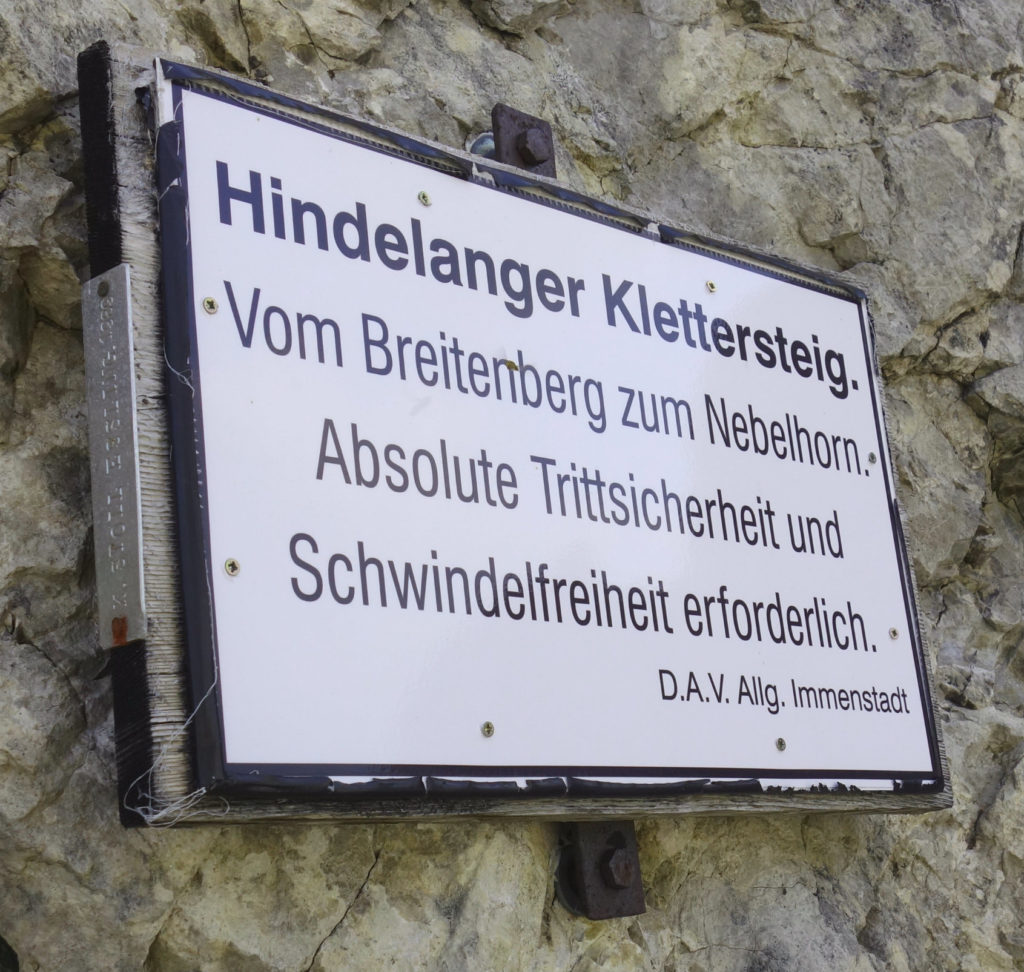 You should be capable of handling heights if you decide to do the Hindelanger Klettersteig. 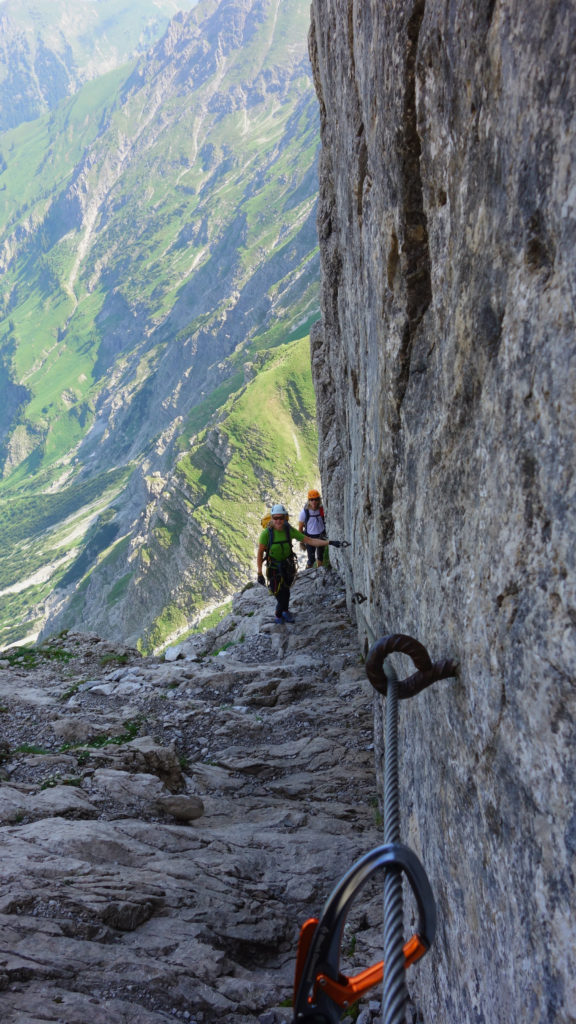 Klettersteig or via ferrata (Iron road) is a protected climbing route, where you can secure yourself to a steel cable which runs along the route. 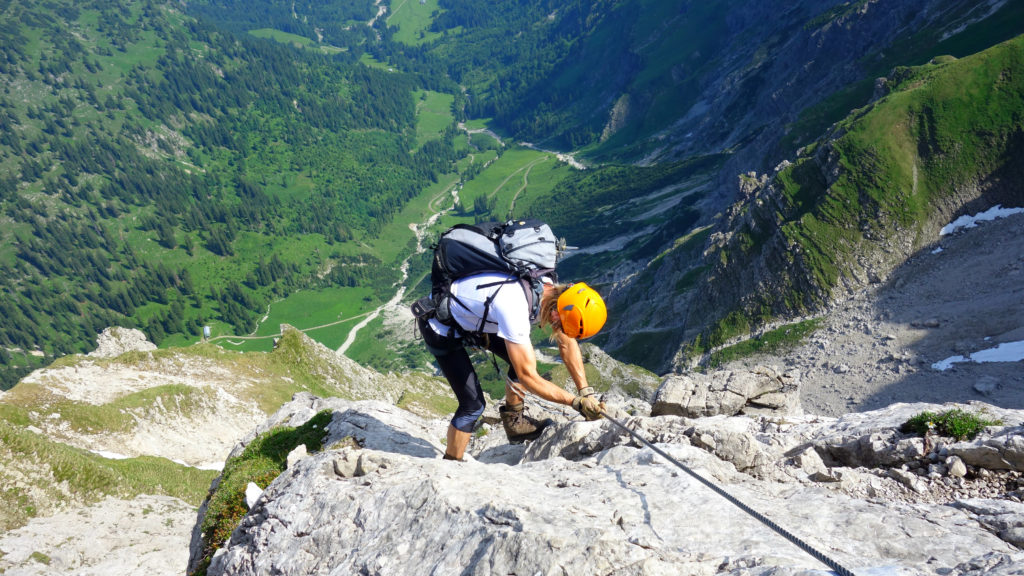 Hindelanger Klettersteig is graded C on a via ferrata A-F difficulty scale, because there are parts of the route where the steel cables are absent. However, our feeling was that this was manageable if you’re not easily scared by heights and take your time. 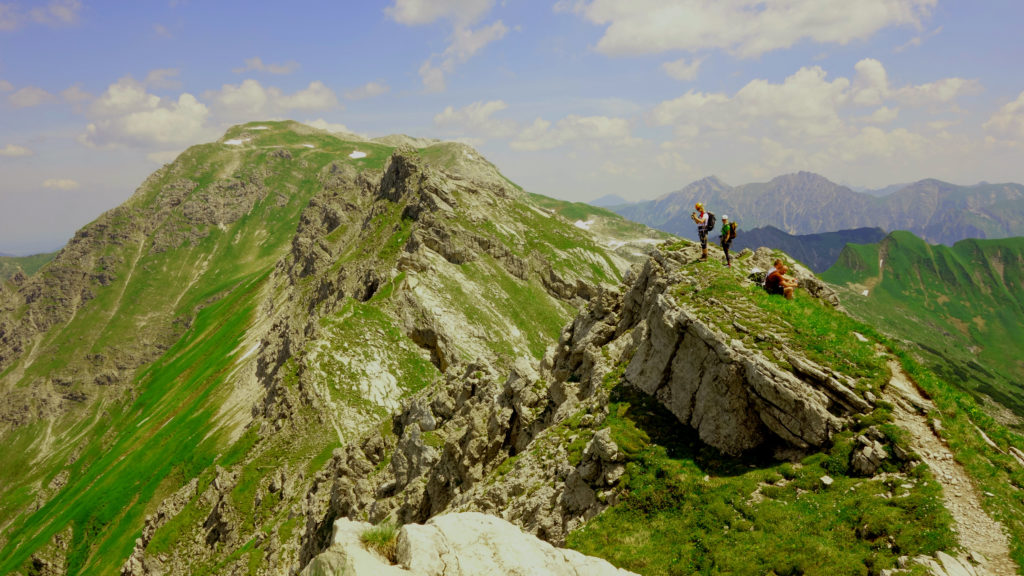 The Klettersteig took around 5 hours for us to do, and then we had an additional 5 hours hiking down the mountain to get back to the car. 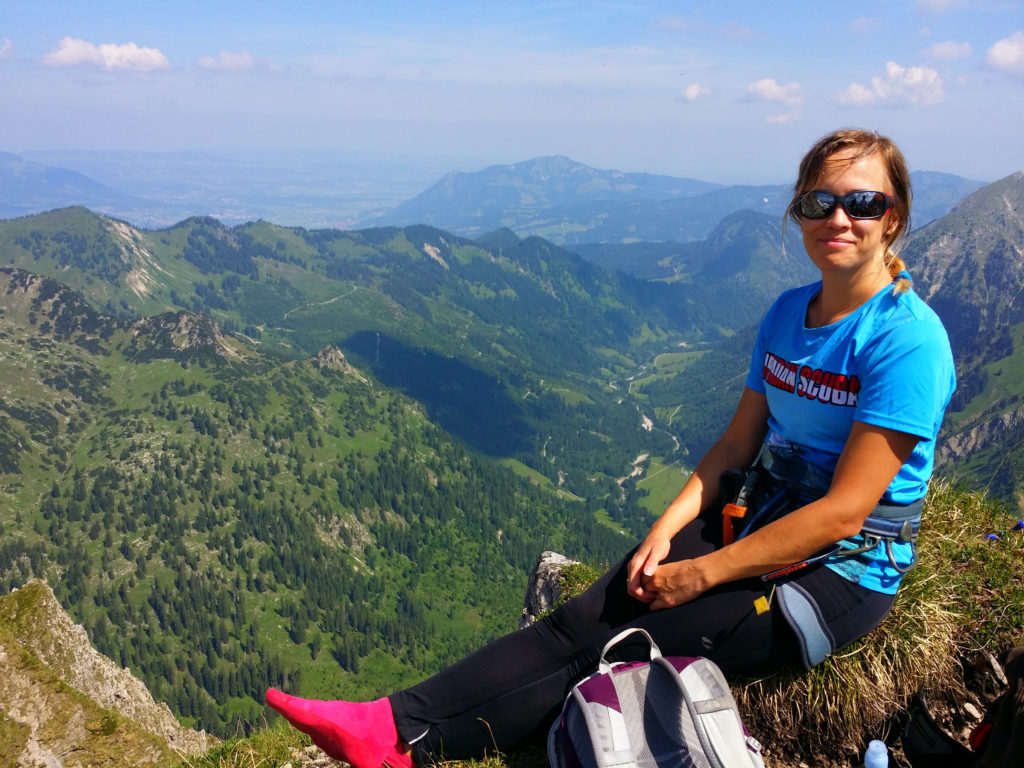 Ulrika in her favorite spot, sitting on a mountain looking down on the world! 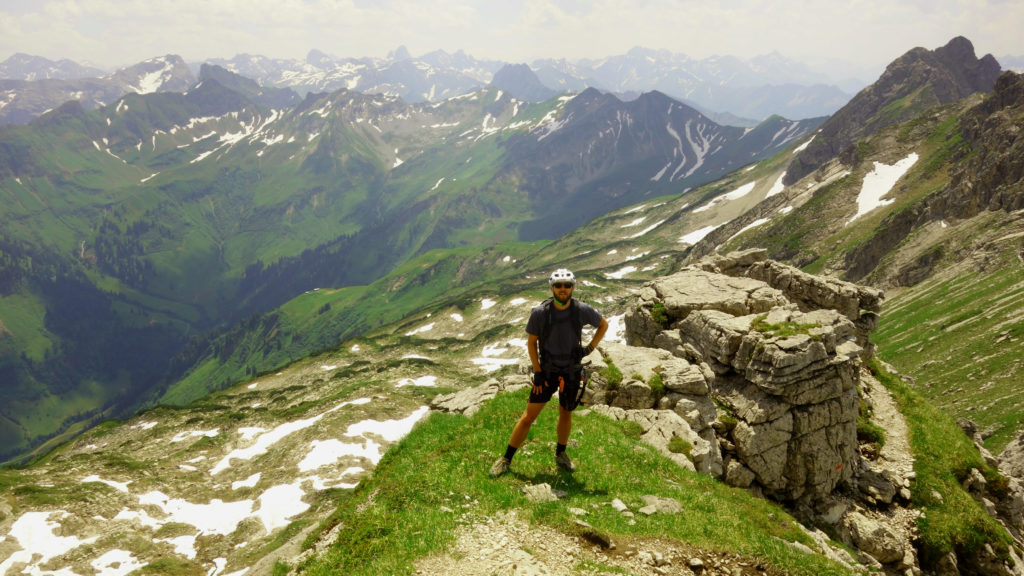 The view over the Austrian Alps was amazing! Below are a slide show with more amazing pictures from the hike. 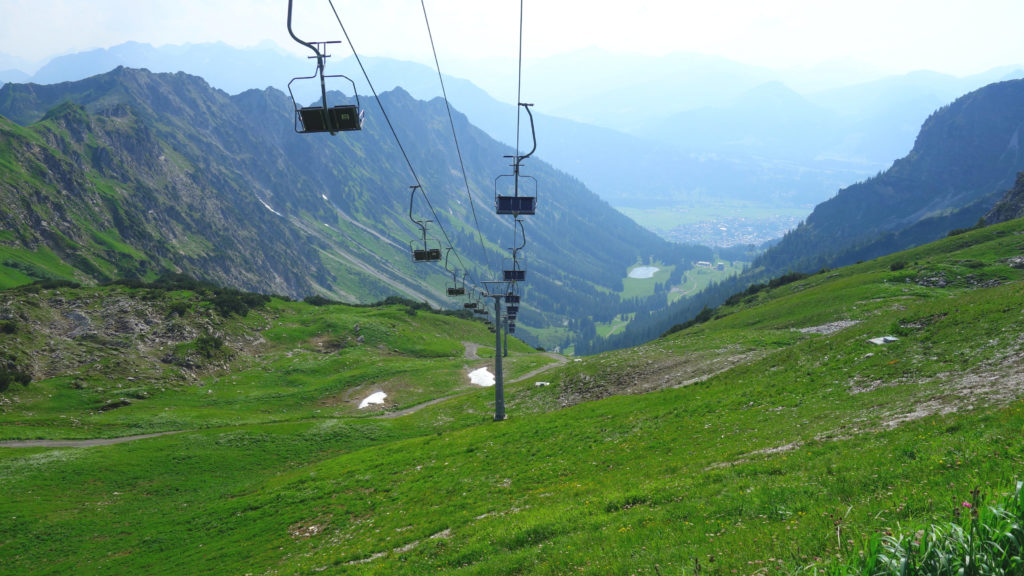 We hiked all the way down to Oberstdorf, doing a 1100 meter descent. These slopes are down hill slopes during the winter season. 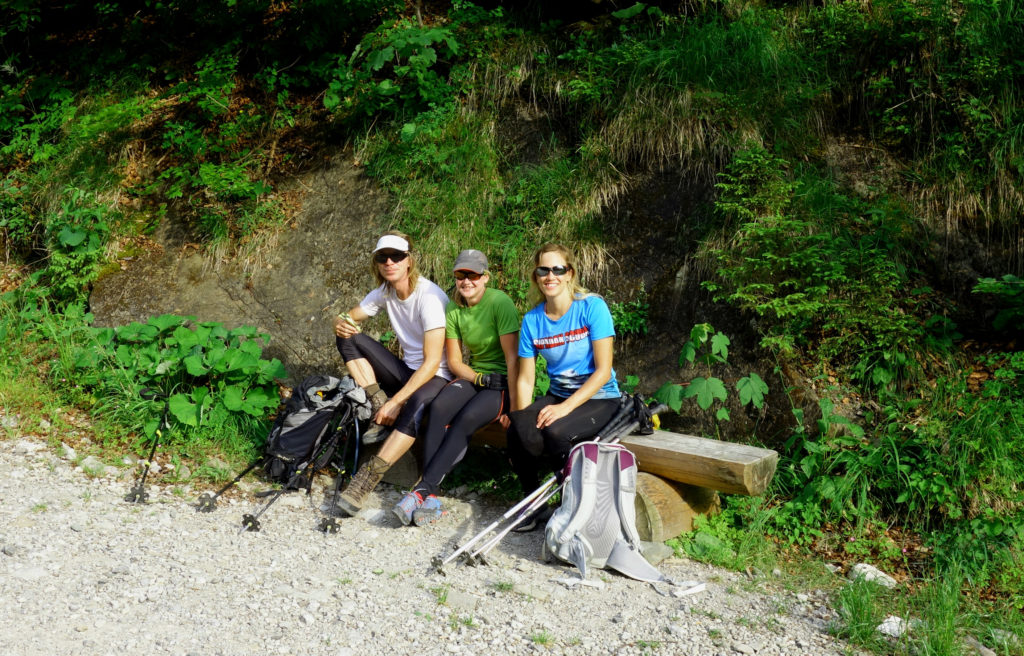 A break on our way down eating some energy bars. 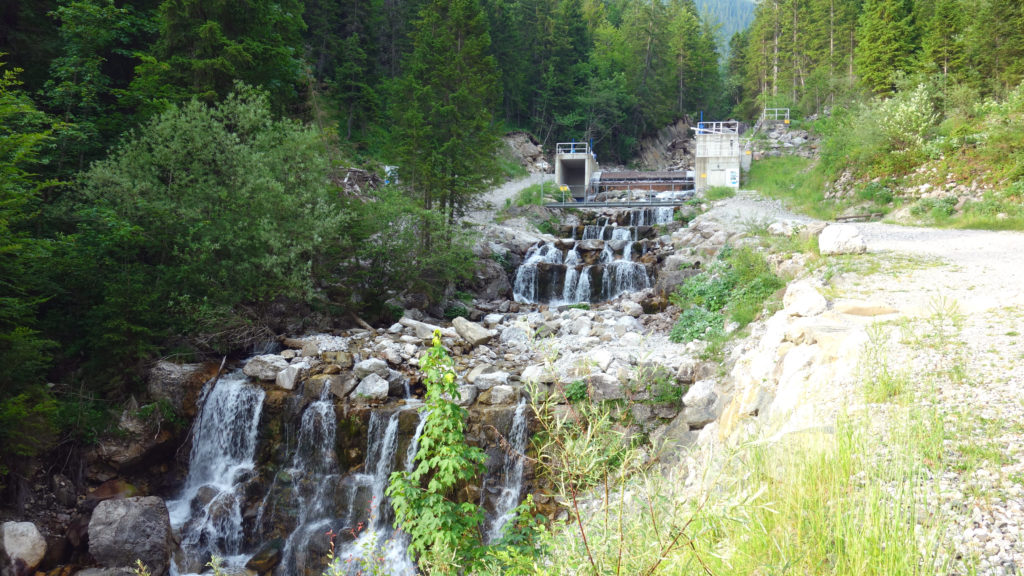 Next to a small waterfall. 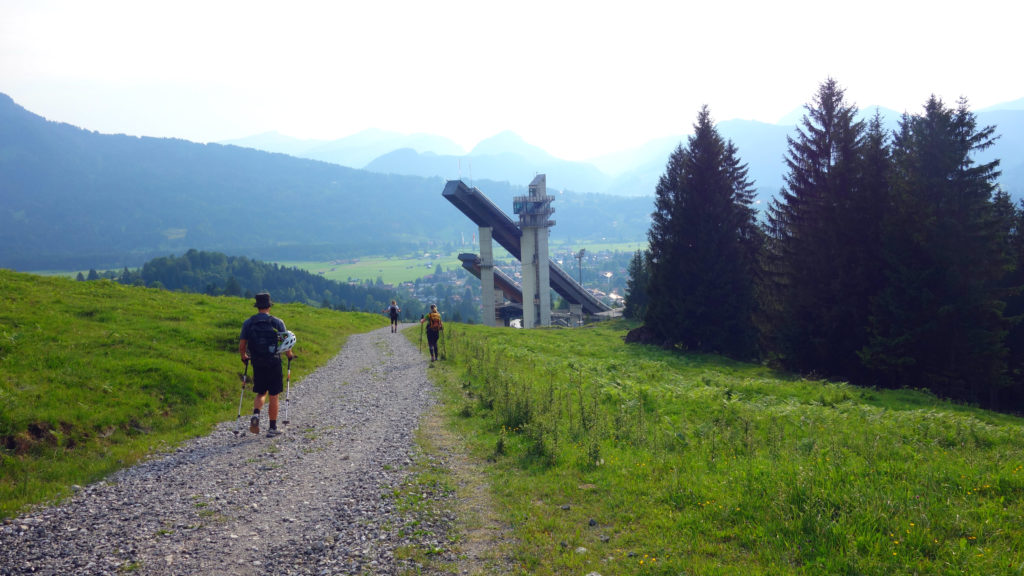 15 km and 10 hours later later we finally reached the ski jumping towers in Oberstdorf. We have a video from our adventure below for people who are interested. This adventure was now a dear memory for us, but more adventures would come our way during the next few days. Thanks Sandra and Markus for taking us on this awesome adventure!