Transit in Tehran – Don’t panic and bring a towel!

We did a transit in Tehran and here is what we and the Hitchhiker’s guide to the galaxy think you should know: 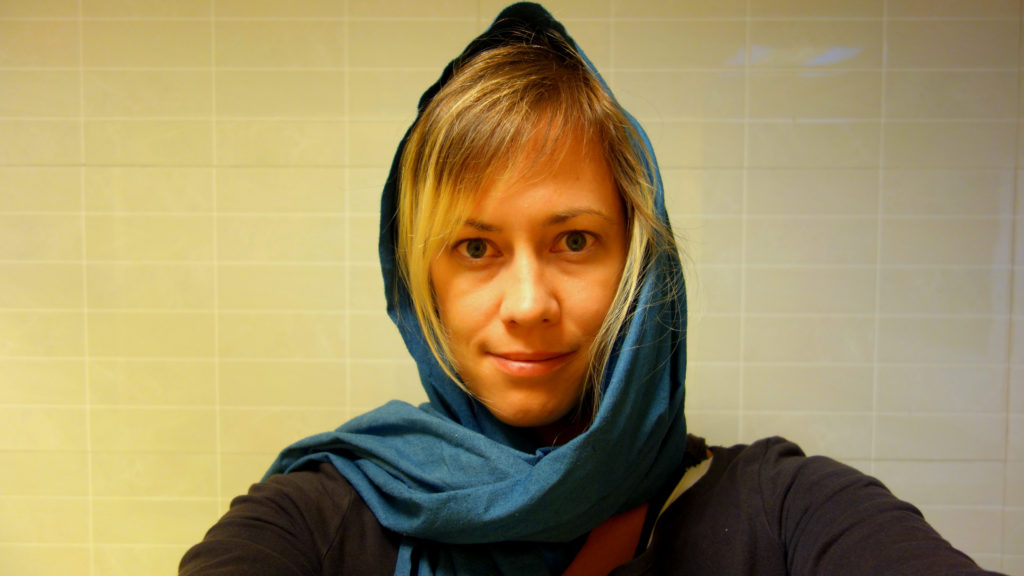 So how about the veil? Ulrika will cite the Hictchiker’s guide to the galaxy for this one: “A towel is about the most massively useful thing an interstellar hitchhiker can have. Partly it has great practical value. You can wrap it around you for warmth as you bound across the cold moons of Jaglan Beta; you can lie on it on the brilliant marble-sanded beaches of Santraginus V, inhaling the heady sea vapors; you can sleep under it beneath the stars which shine so redly on the desert world of Kakrafoon; use it to sail a miniraft down the slow heavy River Moth; wet it for use in hand-to-hand-combat; wrap it round your head to ward off noxious fumes or avoid the gaze of the Ravenous Bugblatter Beast of Traal (such a mind-boggingly stupid animal, it assumes that if you can’t see it, it can’t see you); you can wave your towel in emergencies as a distress signal, and of course dry yourself off with it if it still seems to be clean enough.”
And you can use your travel towel as a veil for the purpose of changing planes in Iran.  Most Iranian women we saw had a competition on who could wear the veil furthest back on their head before it would fall off their heads, so Ulrika just did what the locals do. Also, you don’t need to have a scarf or towel, a hoodie works just as well. 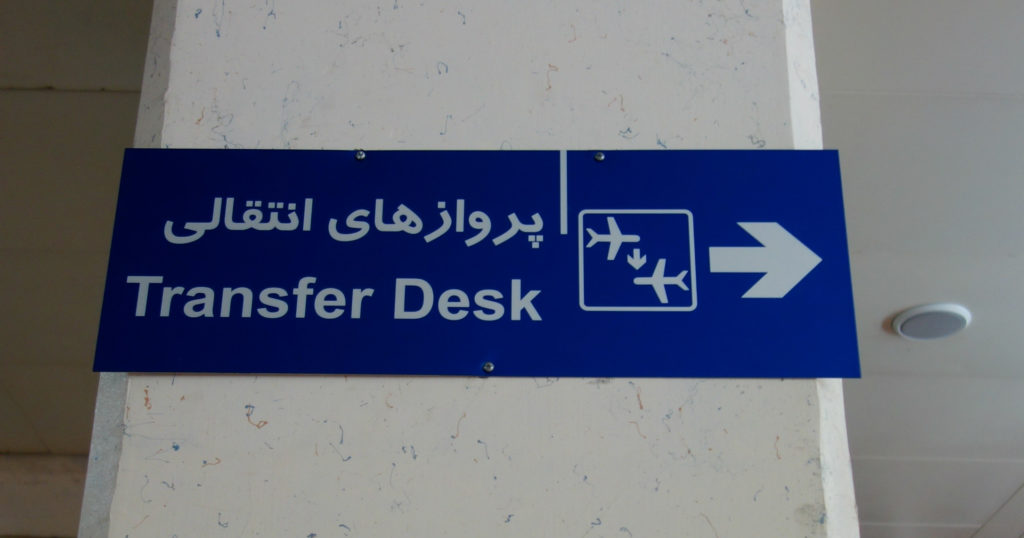 Except for the compulsory veil-wearing law, the transit in Tehran went quite smooth. The experience is even smoother if you’re flying with only carry-on luggage. It can get less smoother if you also have checked in luggage, but hopefully your luggage will follow you to your next destination. 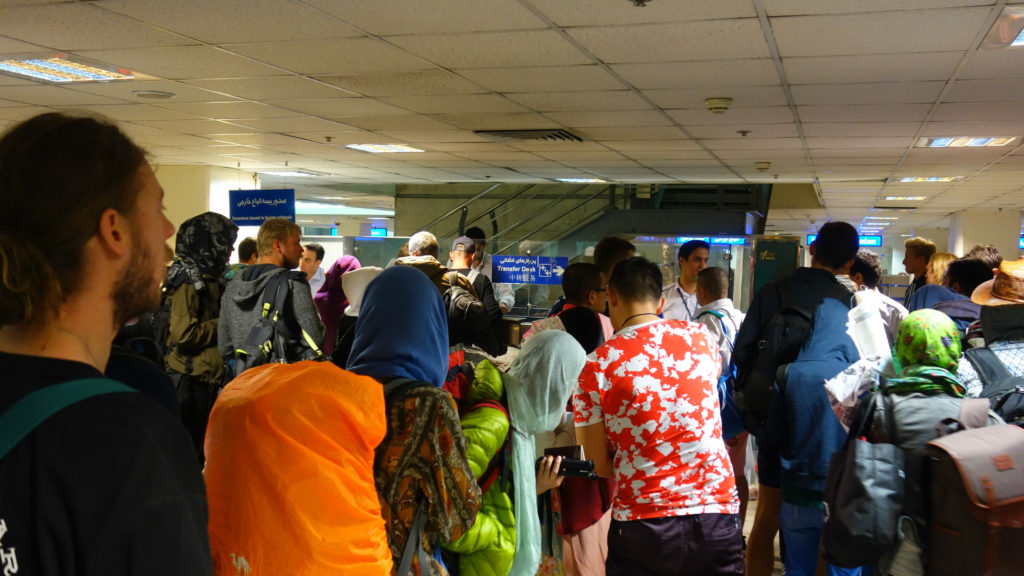 You will not be the only one doing a transit in Tehran. This is the crowd doing a transit at the same time as us at 1 am in the night. Our flight from Tehran was departing at 4.30 am, so we spent the night at the airport. 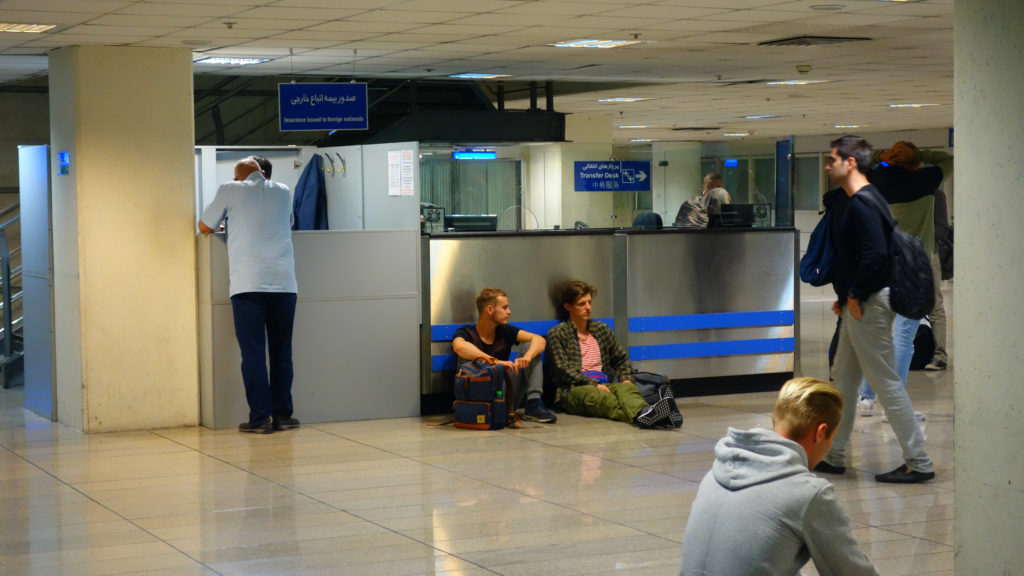 We started our journey in Kuala Lumpur, but could not check in all the way to Istanbul, so we thought that we would have to go through immigration in Iran and check in again. Fear not, you don’t have to do that procedure. Instead you walk to the transfer desk and hand over your passport, your luggage ticket (if you have checked in luggage) and tell them your next flight. After this is done, it’s all about waiting. You will not get a receipt, but fear not, the Iranian government doesn’t want you here either, so you will get your passport back together with a boarding pass and a luggage ticket. 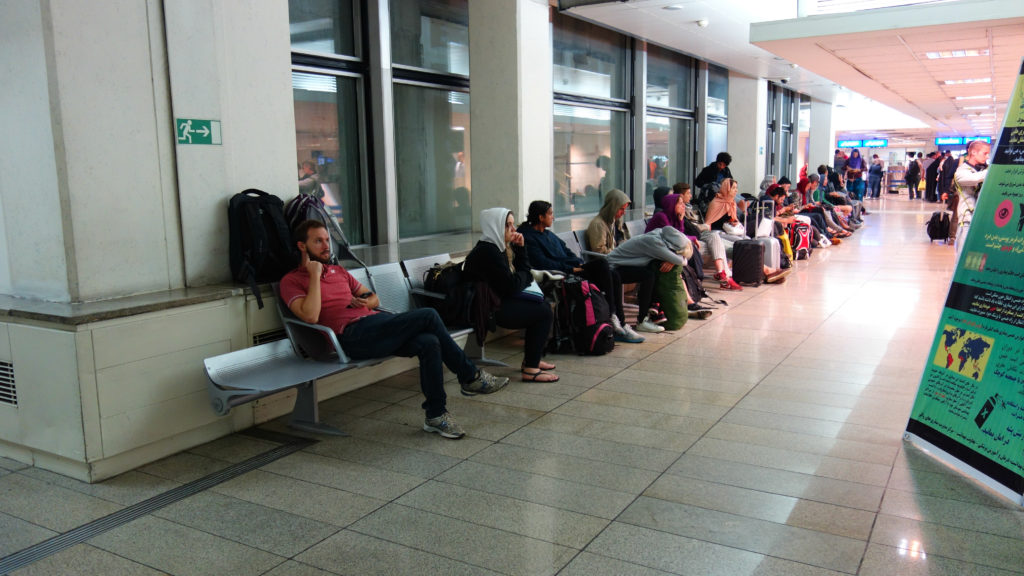 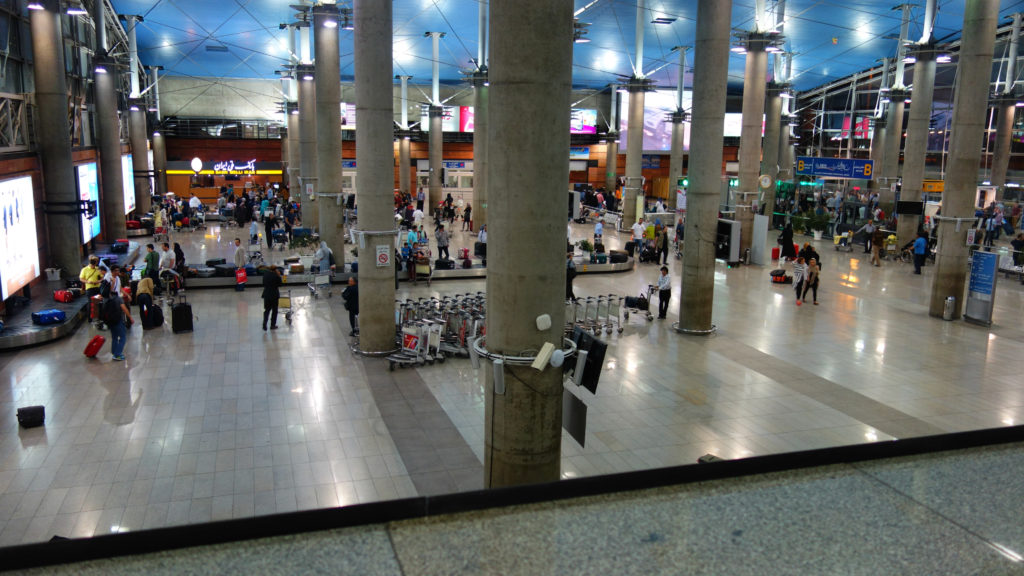 Iranian soil just outside the windows on the right. It would be interesting to visit you someday. Hopefully with no restrictions. 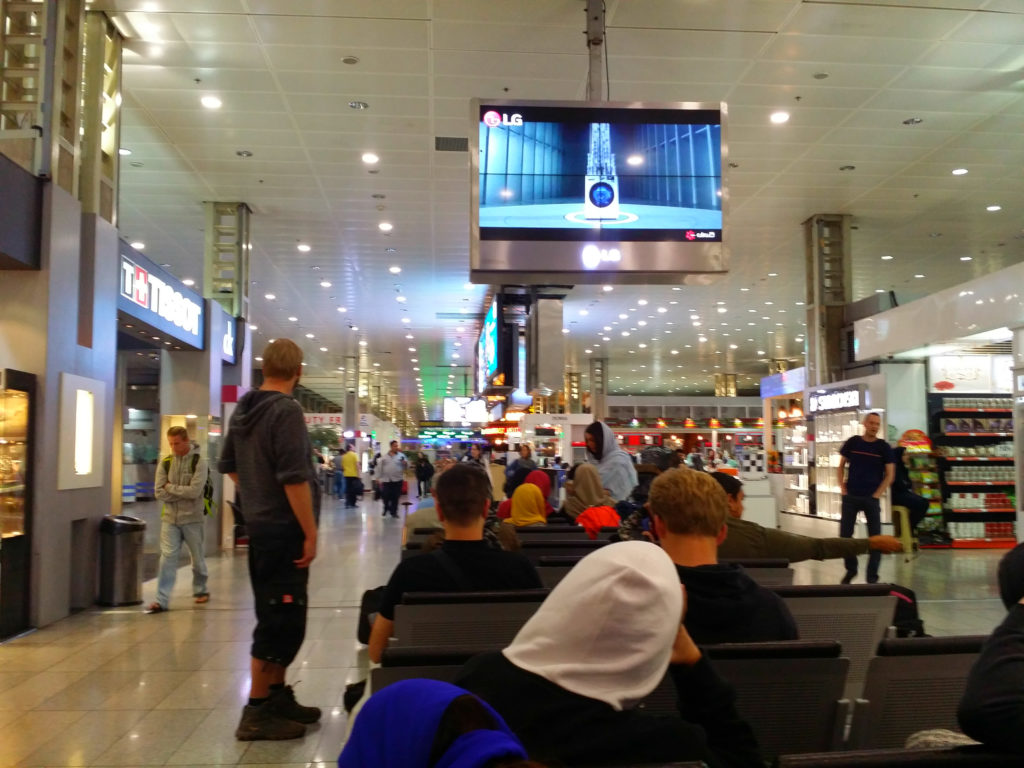 If your lucky, you will be allowed to be on the second floor eventually and it is here where all the duty free shops are located and the gates are also nearby. 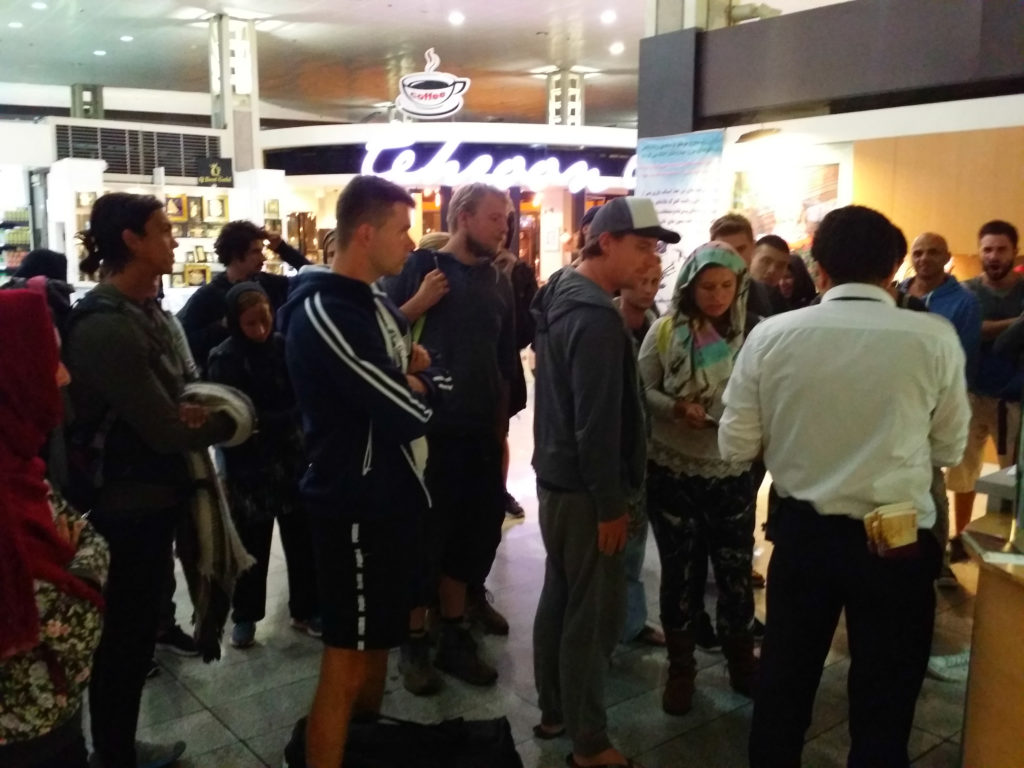 Finally the guy in charge comes with your passports and your boarding cards in his pockets. They start to call out the names and you will get your passport in your hand after they check that the picture in the passport matches your face. We got our passport back approximately one hour before our flight was scheduled to depart, but we heard about people who got their passports back 15 minutes before departure and they managed to get on to their flights without any problem. However, the best thing about this procedure is that you don’t get an Iranian stamp in your passport. This means that you will avoid future immigration troubles in other countries by not having an Iranian stamp in your passport. 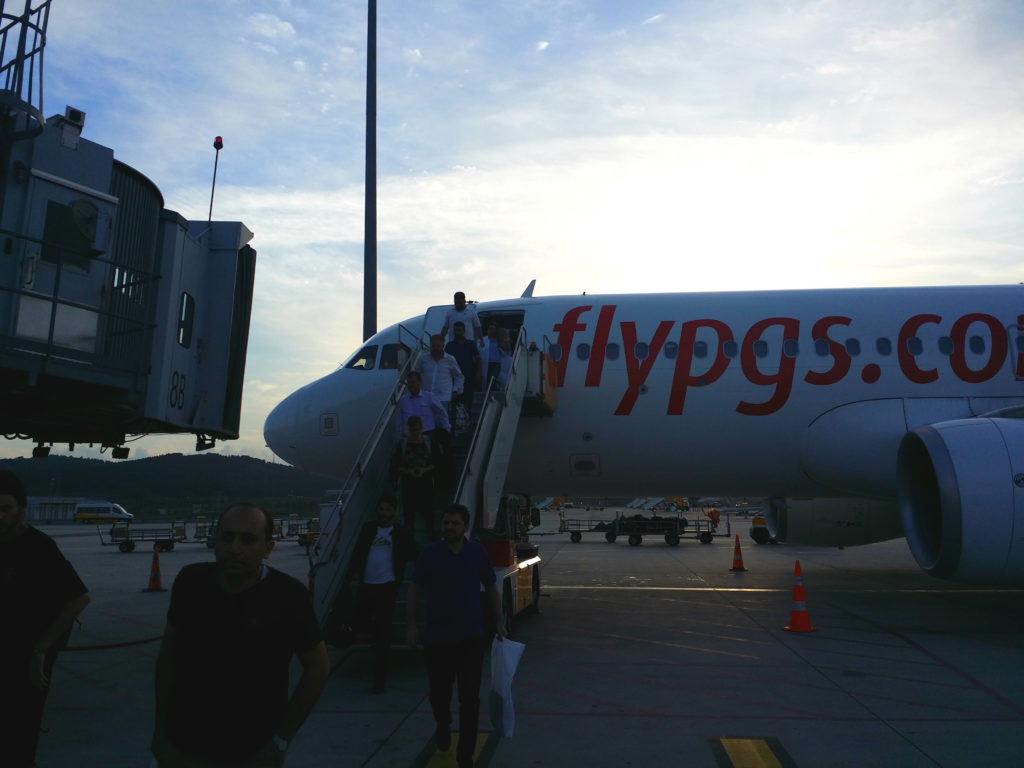 The veils come off as soon as you enter the aircraft again.
We flied with Air Asia from Kuala Lumpur to Tehran and with Pegasus between Tehran and Istanbul. This is quite a common route to go from Southeast Asia to Europe for a lot of backpackers, so we were approximately 20 people doing the same transit this night. 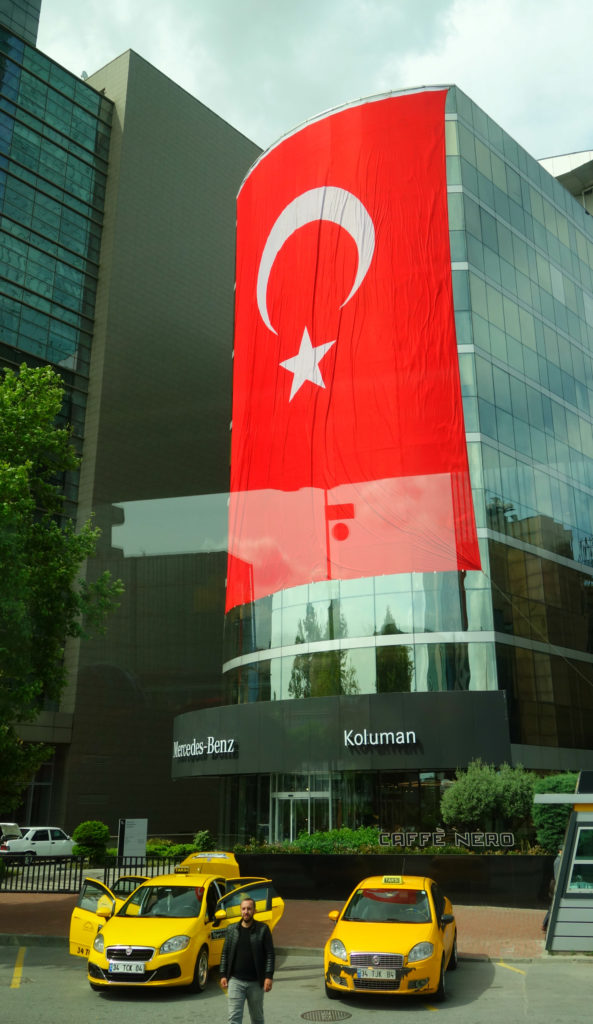 So now we are in Turkey and we’re loving it :). We chose between Duterte, Əliyev and Erdogan, and we finally decided to head to Turkey, because it was the cheapest and we had kebab cravings.

Air asiaairportIranTehrantoweltransfertransitveilwhat to think about

We went into the city to start the process of gett