An old friend in Kings Landing

Dubrovnik or Kings Landing, depending on if you’re a Game of Thrones-fan or not, was our next destination. We ended up here because one of our old friends has relocated to this place and we decided to pass by and surprise her with a visit. There are direct flights from Istanbul to Dubrovnik, so this time we had an enjoyable flight with only a few hours in the air and no transit. It was Pontus birthday as well, so the flight attendants came and wished him a happy birthday and gave him a small present.
Within half an hour after we stepped on a bus towards Dubrovnik, the Old port of Dubrovnik showed up outside our windows and it was as to see Kings Landing, the only thing we missed was the giant fleets battling in wildfire. We were going to spend a few days here and we really liked what we saw. 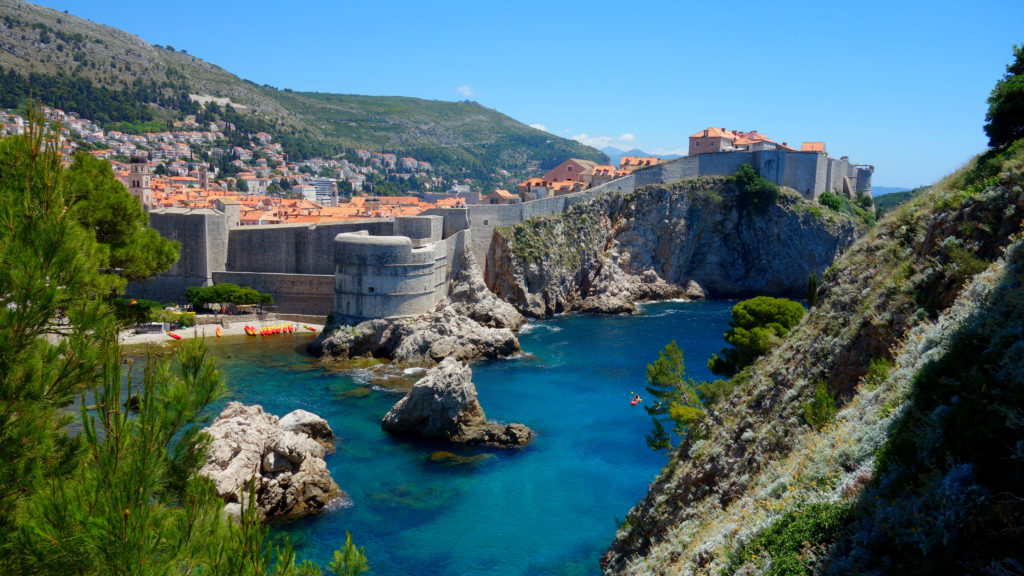 Next stop for us was Dubrovnik, Croatia! 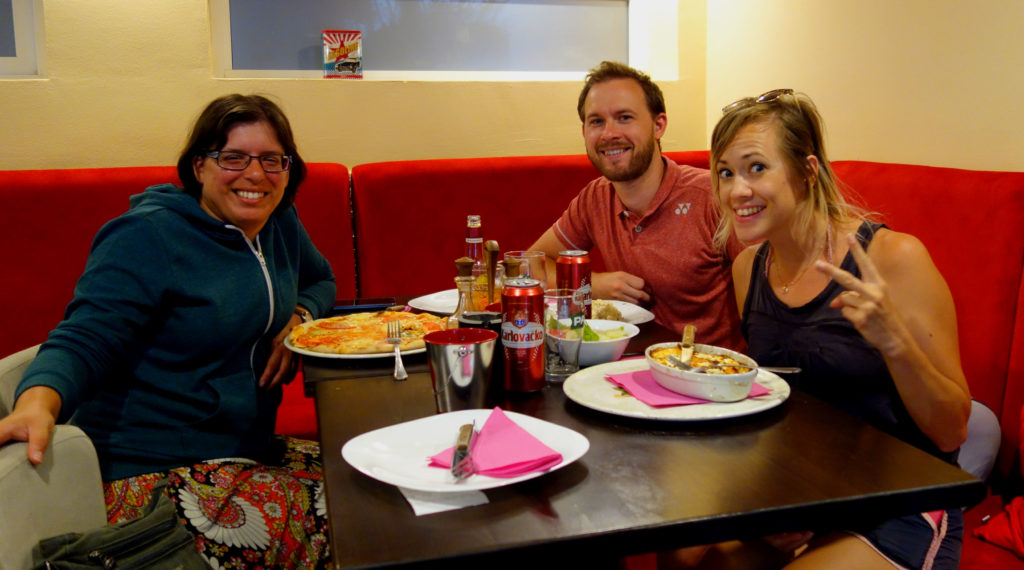 And we were here for this girl, Linda! 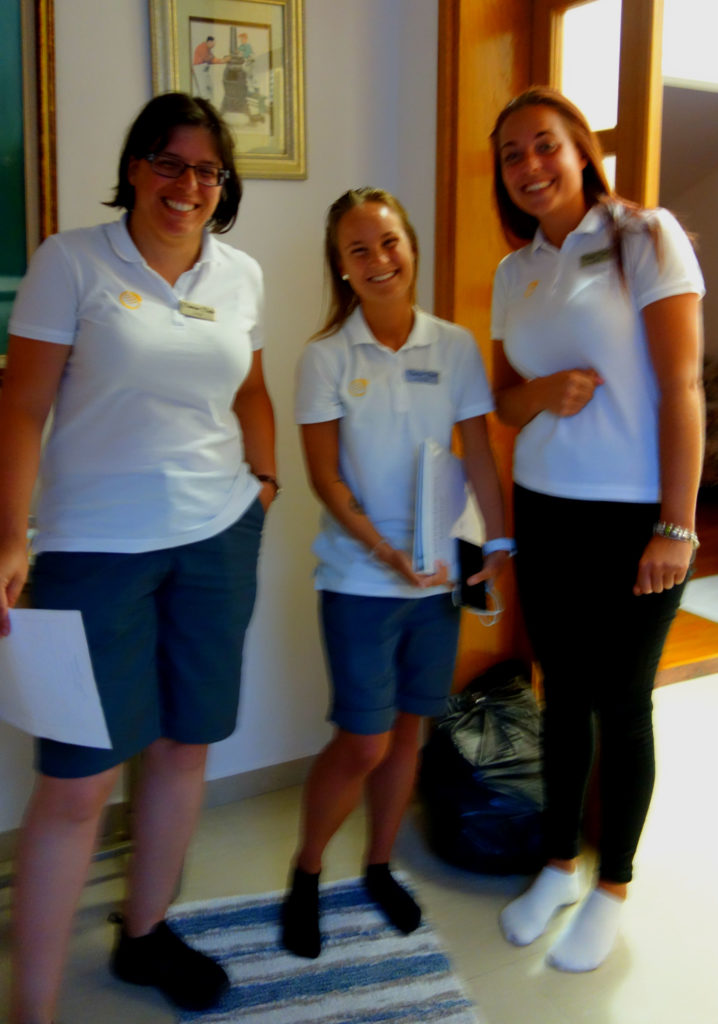 Blurry picture with Linda and her co-workers Amanda and Caroline. Linda has started to work here this season with Solresor. Linda is a fantastic history geek, so that is handy when she’s taking her customers out exploring the historic parts of Dubrovnik (in Swedish). 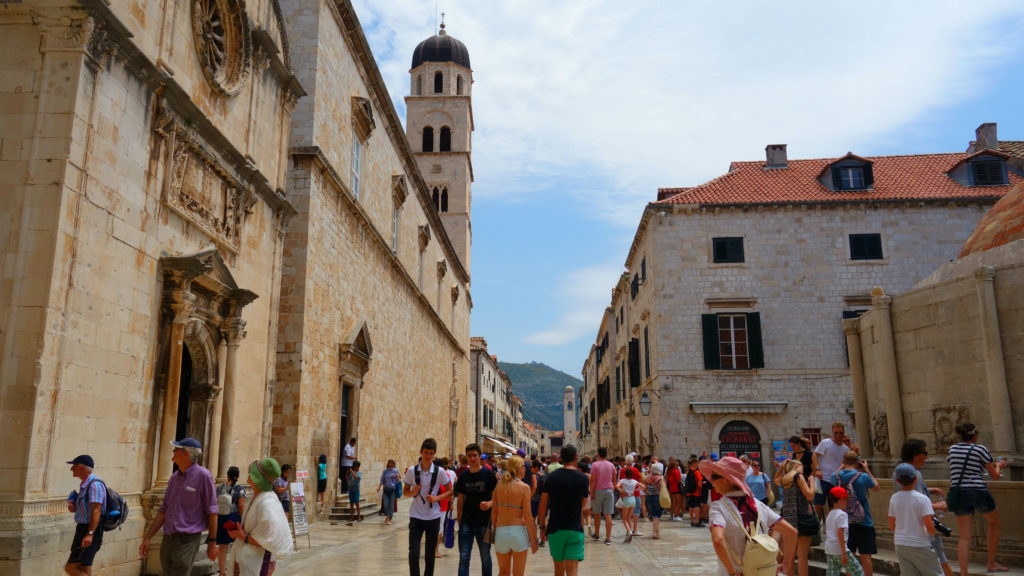 Linda brought us to Old town and told us about Croatian and Dubrovnik history. This is the Stradun, the main street of Old town Dubrovnik. We also filmed a few parts of our tour with Linda, which you can see below. 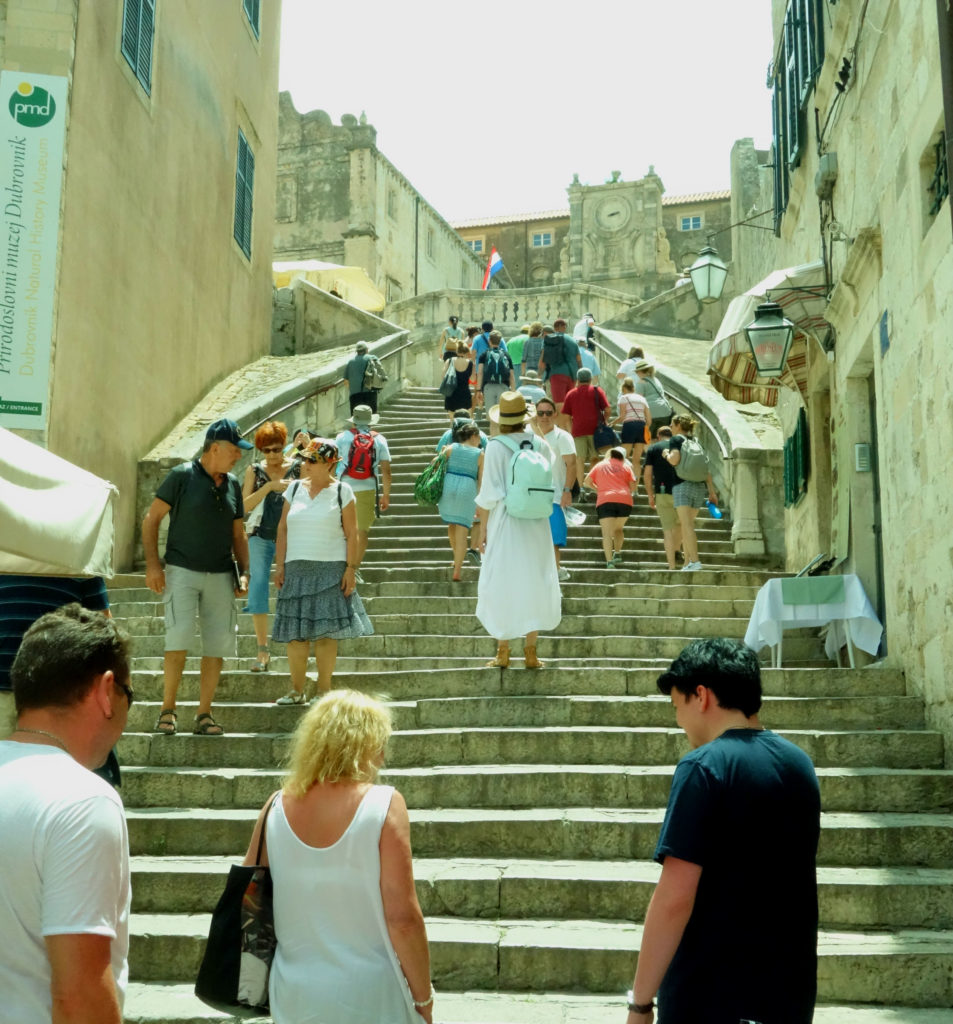 The shame-shame steps from where Cersei starts her naked walk through the mob (Game of Throne-reference again). It is much smaller in reality. 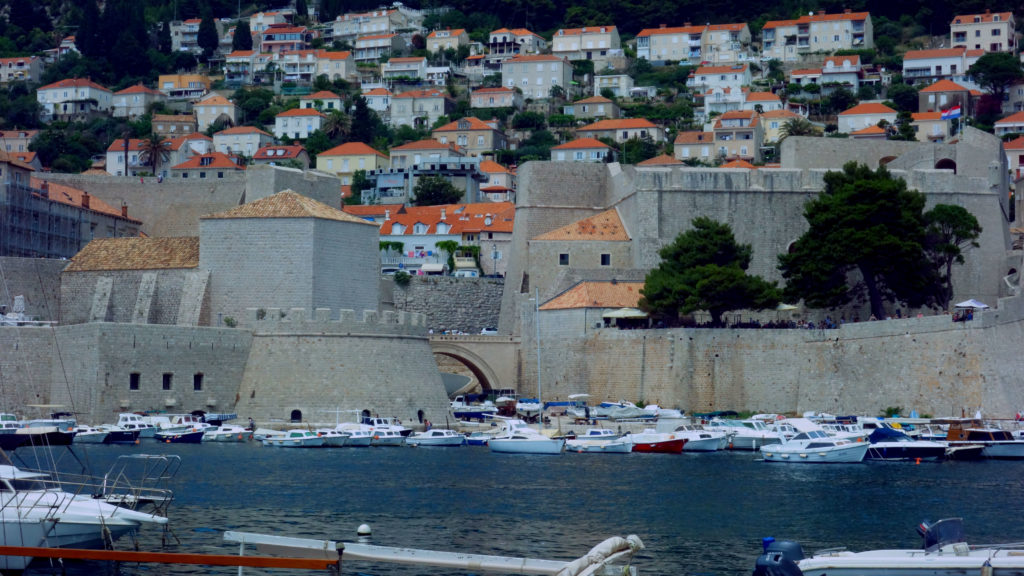 The old Port of Dubrovnik and the harbor of Kings Landing (Game of thrones-reference). 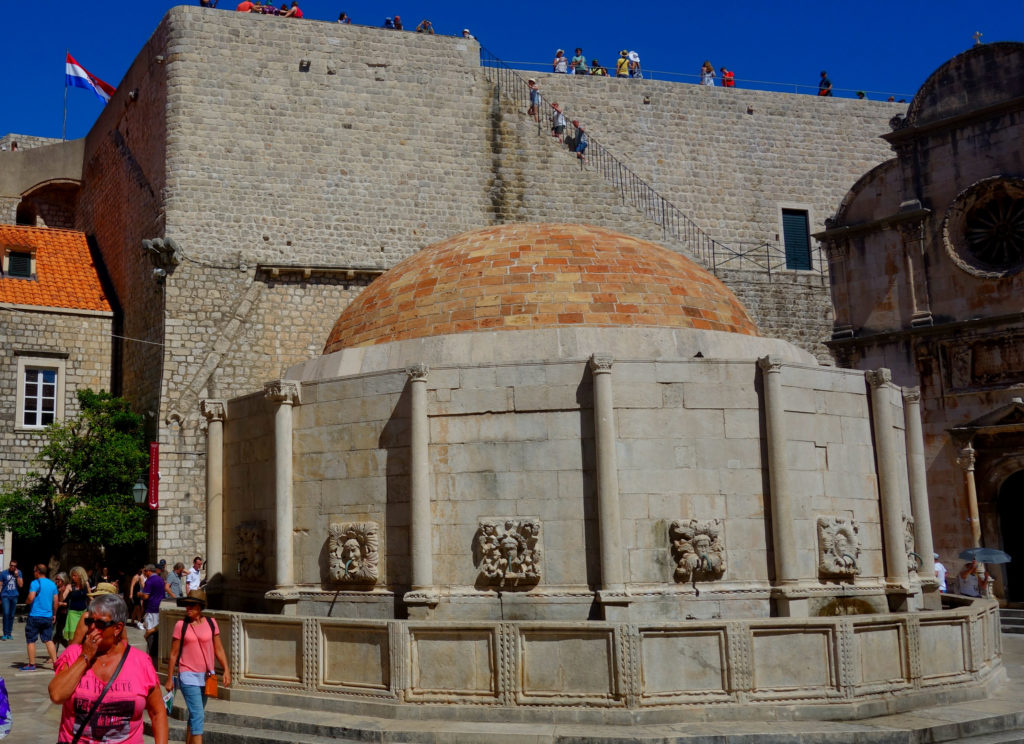 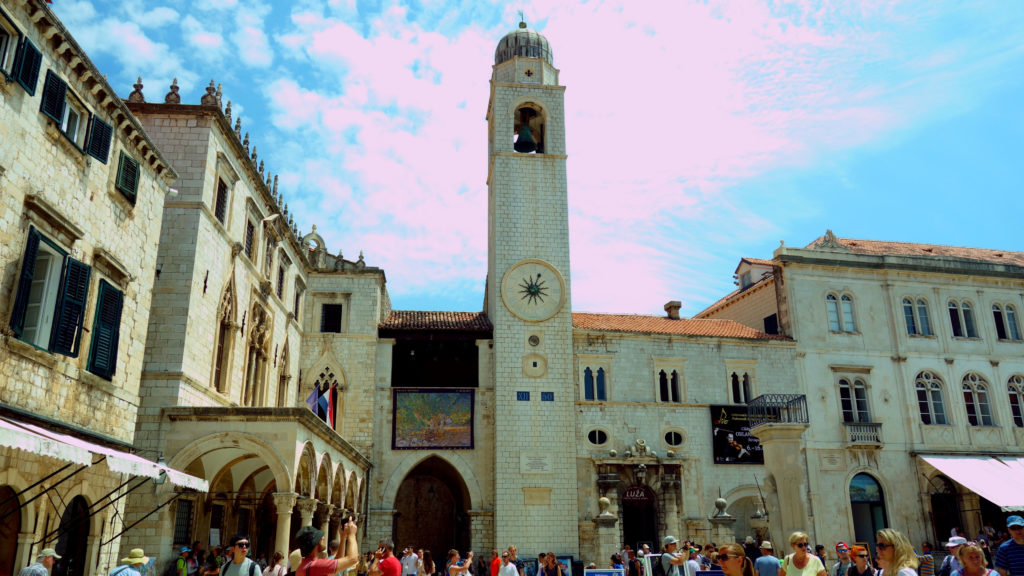 The clock tower in the end of the main gate was built in 1444 and shows both the time and the phases of the moon.

Orlando’s Column near the Clock tower has a sculpture of the famous medieval knight Orlando, or Roland which was his real name. There are famous songs written about knight Roland and the chivalry associated with knights are believed to come from knight Roland. 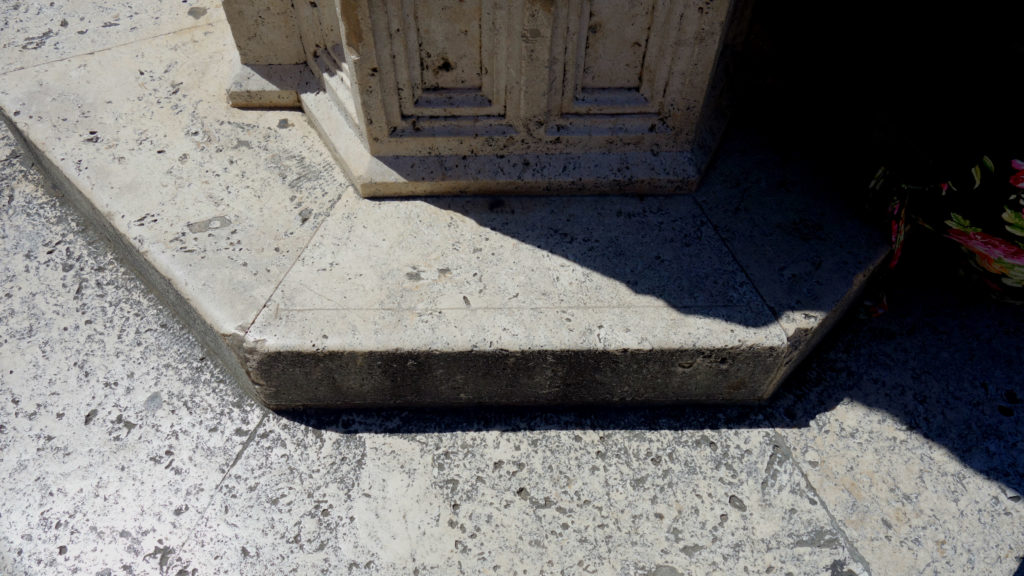 For a long time the old town used Roland’s underarm as a unit of measurement, 1 L equaled to approximately 51 cm. Merchants that came to Dubrovnik had to convert their goods to the unit before they could enter the market in Dubrovnik. People who bought for example a piece of fabric could go to the column and see that they weren’t fooled. They have carved out 1 L at the bottom of the column so people didn’t have to reach up to use knight Roland’s under arm. 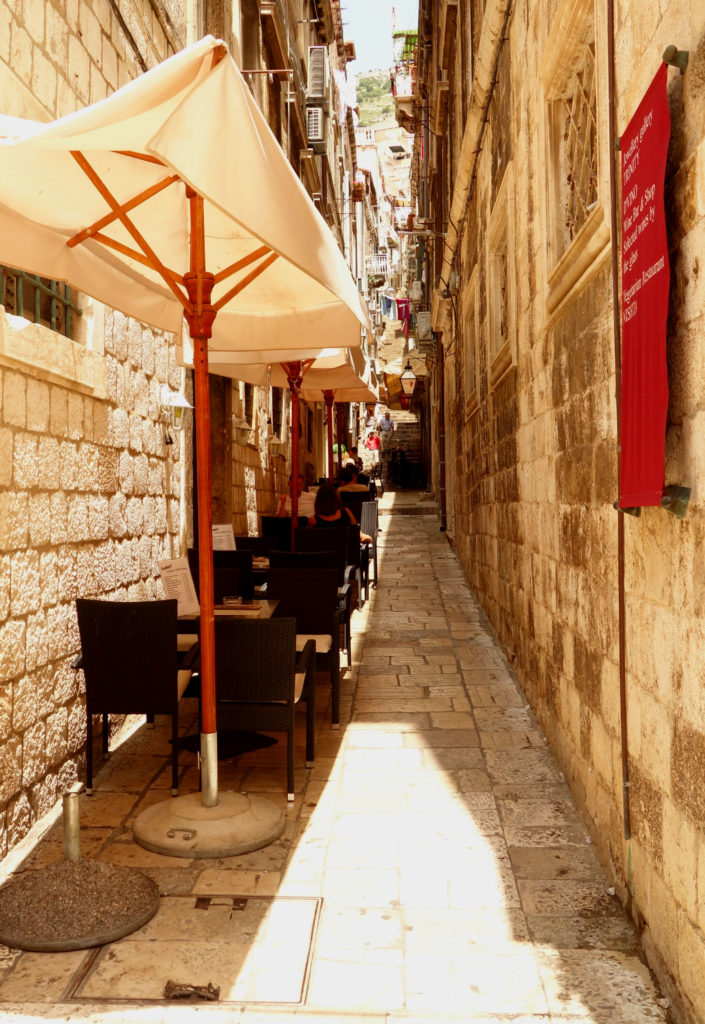 The small alleys are packed with tables. The red flags, which are hanging at the entrance of the alleys, tell you what you can find further in the alley. 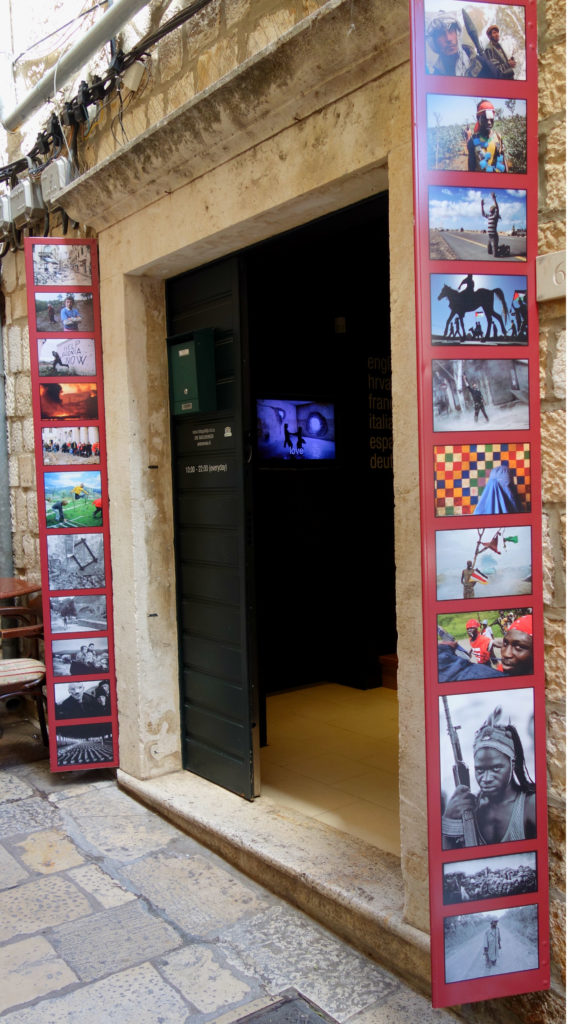 The war time photo museum is very interesting to visit, but can be hard on you if your’e sensitive to see the ugly parts of humanity. It was a war photographer that documented the Yugoslav wars, who opened this museum after the war. The main exhibition is photos from the wars on Balkan between 1991 and 1999, but they also have temporary exhibitions on display and a room full with selected pictures from earlier temporary exhibitions. 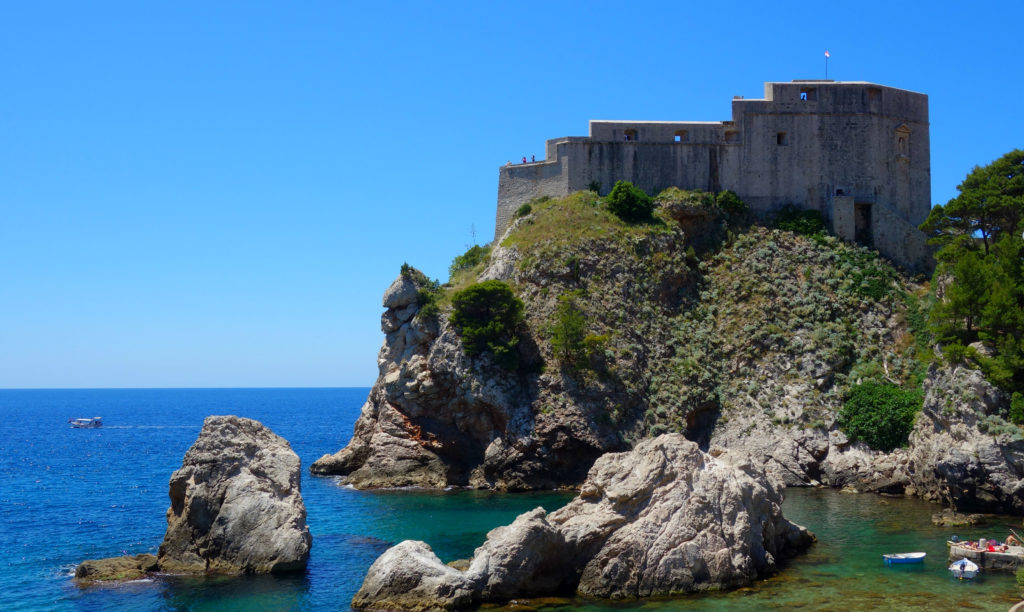 We headed up to Fort Lovrijenac after our tour in the old town. This place is called Dubrovnik’s Gibraltar and the Fort is built early in the 11th century to keep the Venetians away from Ragusa (the old name of the city). You get an awesome view over old town from the fort! 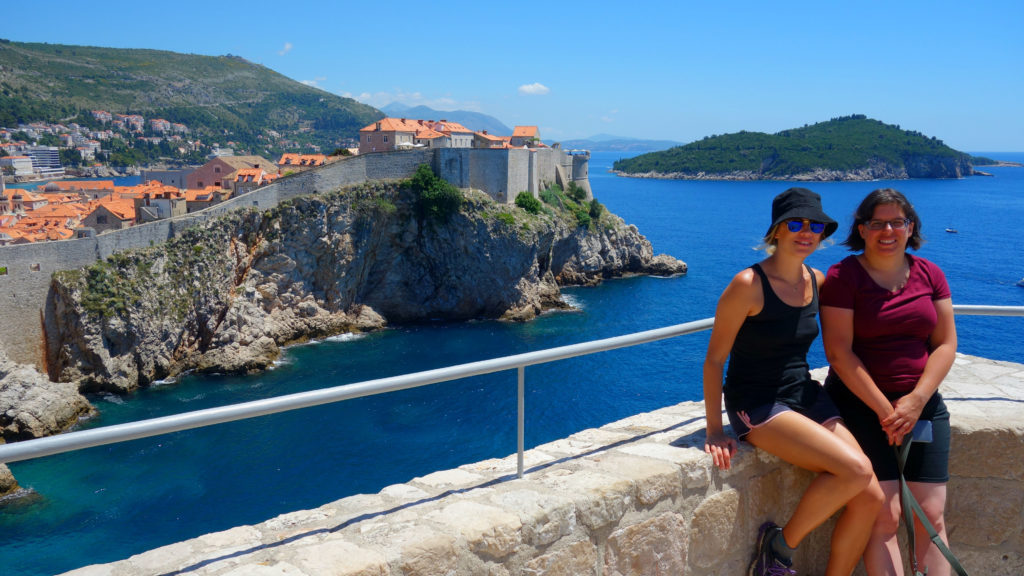 It was so much fun meeting Linda again and to see where she spends her days now.