Malta and Gozo are known to be good for diving, so we had to descend below the surface here. Our main purpose of our visit to Malta was the Corax conference, but we had one day scheduled for diving and the choice fell on Dive systems Malta and their “Diving around Gozo”- package.  We only had time for two dives, so we went to the “Inland Sea and Tunnel”- and the “Blue hole”-dive sites. The Azure Window is not standing there any longer, but luckily for us, it is now part of the marine life next to the Blue Hole, which was one of our dives here.  If we had more time on Malta, we would have loved to dive around some of the spectacular wrecks from the world wars that are laying around at the bottom of the sea next to Malta or explore more of the fantastic underwater limestone-caves here, but we have to spare them to another time. Going to Gozo was also interesting, we had been to Malta one time before, but we had saved the Northern part of the Maltese archipelago, because we knew that we were coming here for the conference. Below are pictures from our last days on Malta for this time. 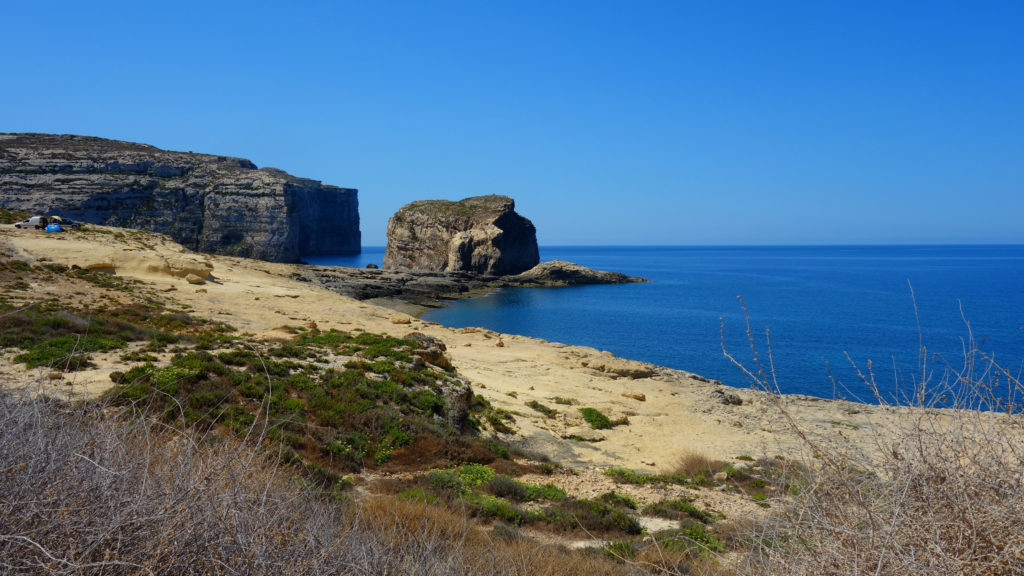 We went diving with a fellow conference-attendee during our last days in Malta. We would only have time for two dives, so we choose the smaller island Gozo to be where we would explore the underwater wildlife of the Mediterranean sea. This is the first time diving in this part of the world so we were quite excited about what we would encounter down there. 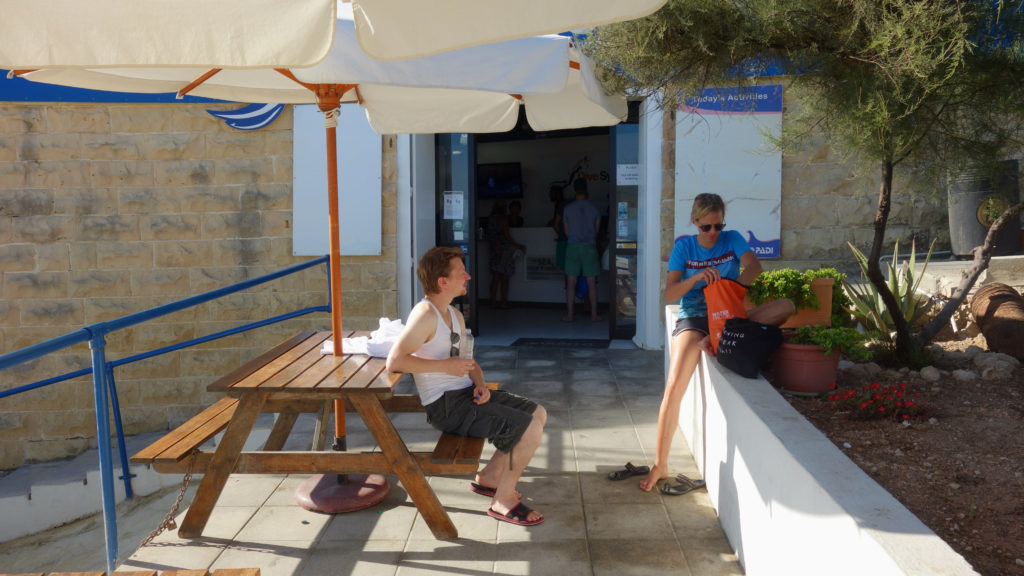 We had gotten to know our dive-buddy Per during the conference and now we met up with him early in the morning outside our dive center.

We got suited up with dive gear, not this old relic though – it is just a historical piece standing in the dive shop. 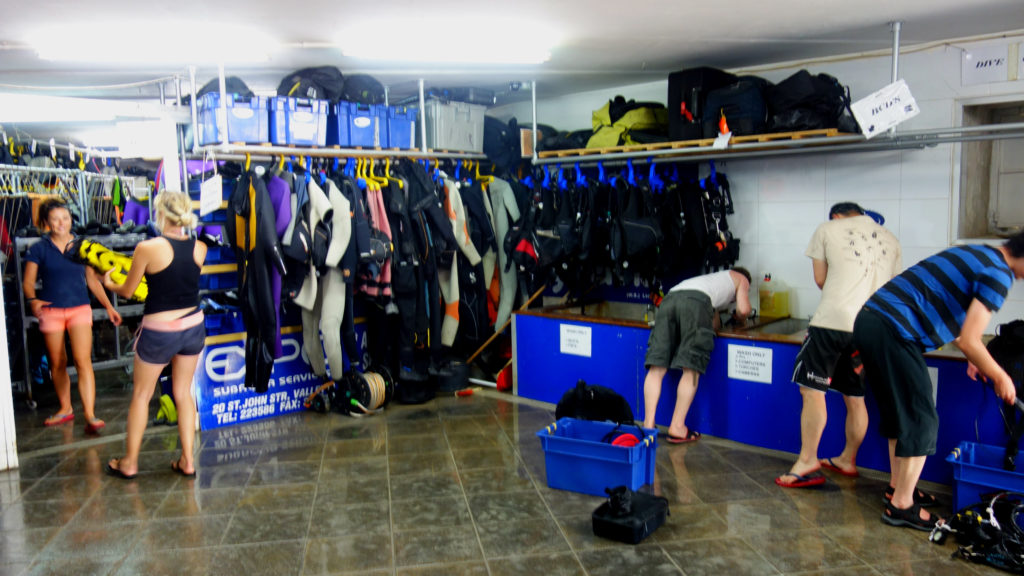 We went with Dive Systems Malta and they had nice new sets of dive gear. They also give you bigger tanks in their standard equipment. With a bigger oxygen tank you will be heavier, mind that when you have to walk to the dive site from the parking lot (see the videos further down), but you will have plenty of oxygen. This is good if you’re a heavy breather. 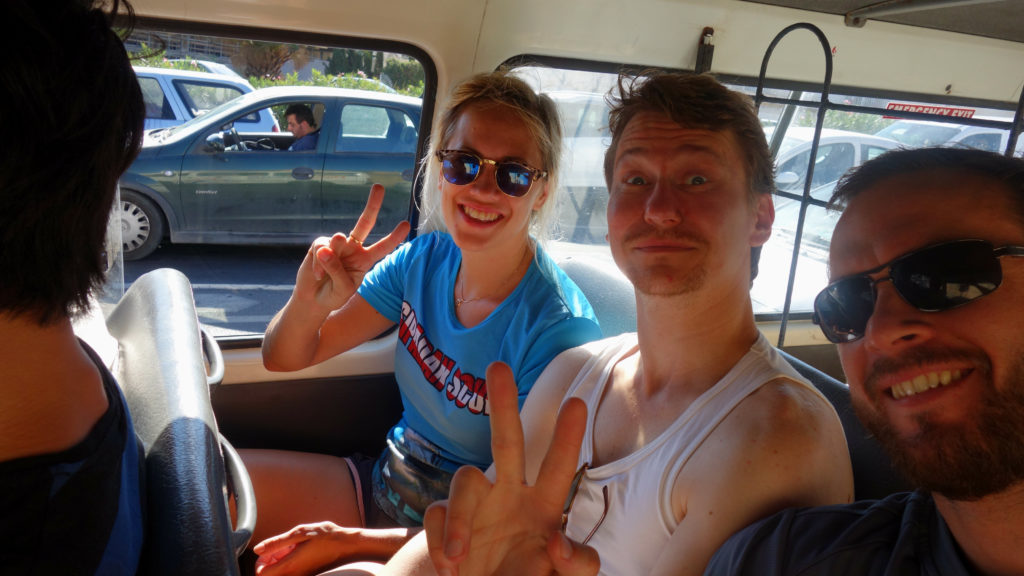 It takes around 2.5 hours to go from Sliema on Malta to the East part of Gozo, where we were going to dive, including taking the ferry between the islands. 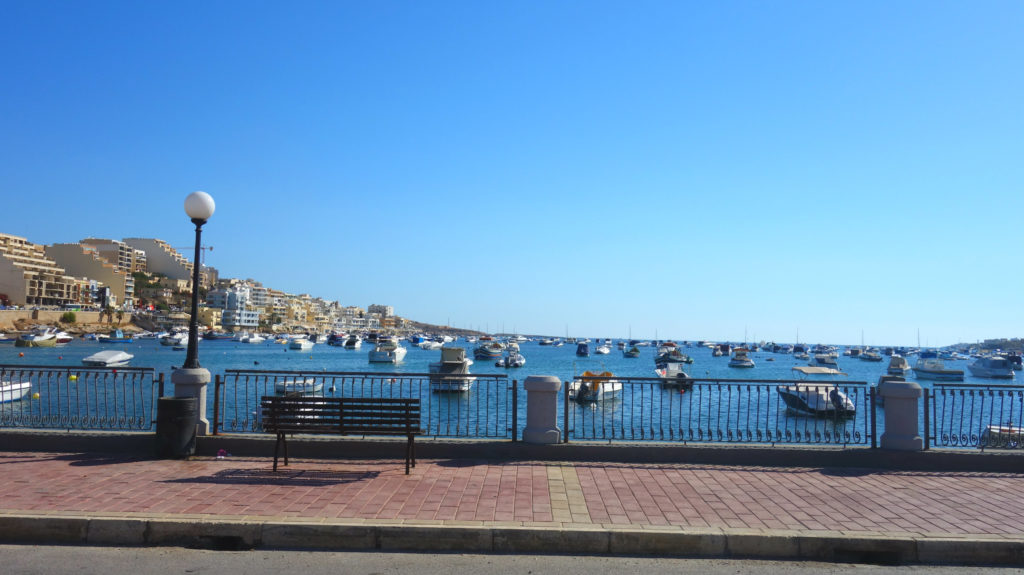 We got to see the landscape in Northern Malta while we we’re getting closer to the town Cirkewwa, from where the ferries are departing. 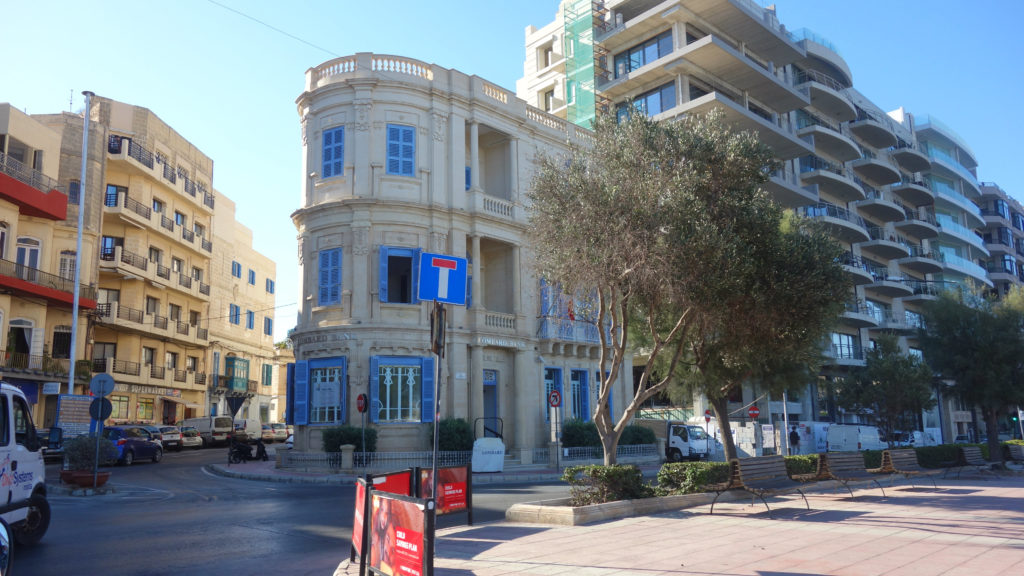 Malta is mainly beige, with a few colorful spots here and there. 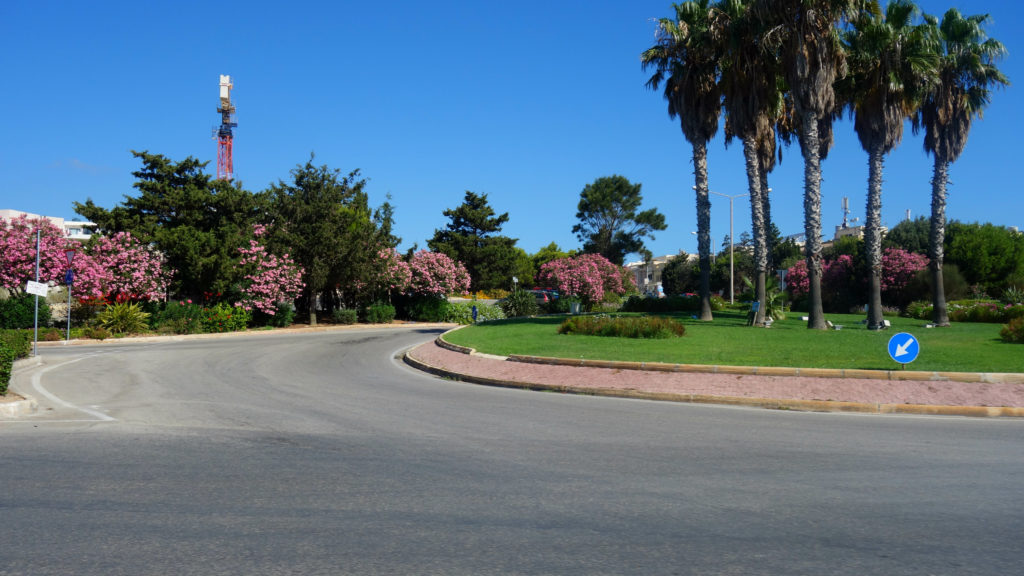 They do have a few parks here and there so when we saw a bit of green, we just had to take a picture. 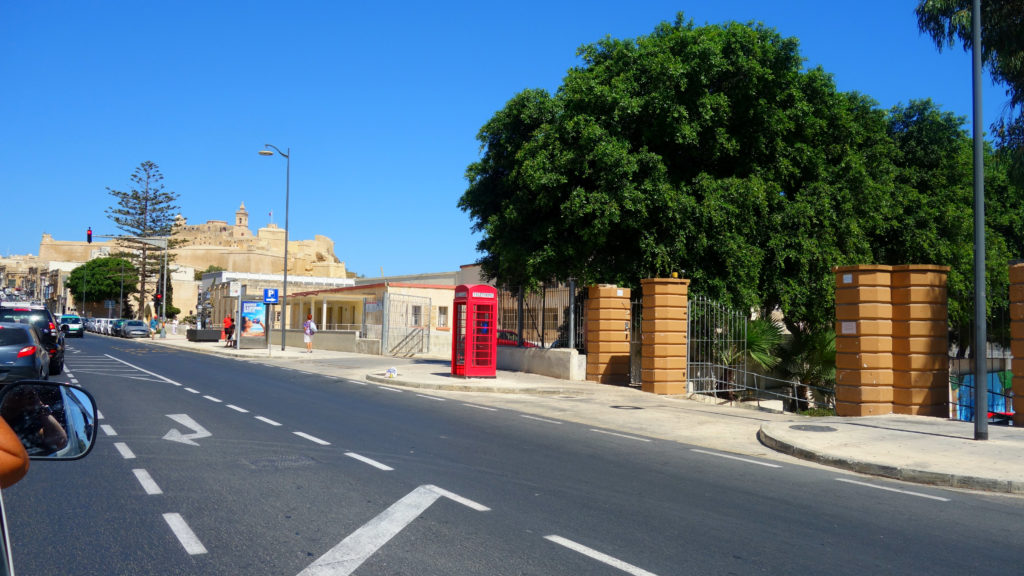 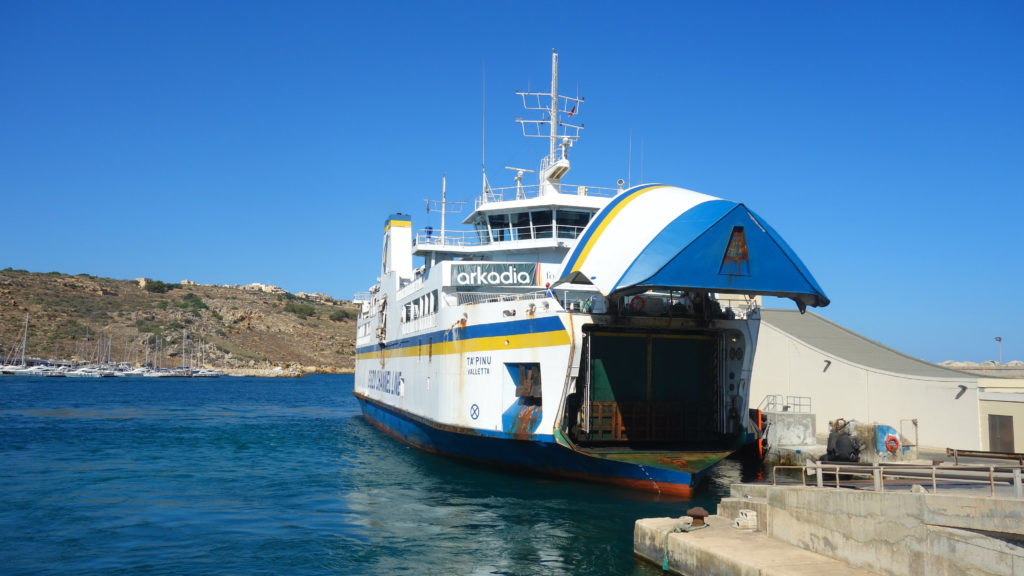 The ferry departs frequently, so we didn’t have to wait long for a ferry to take us to Gozo. 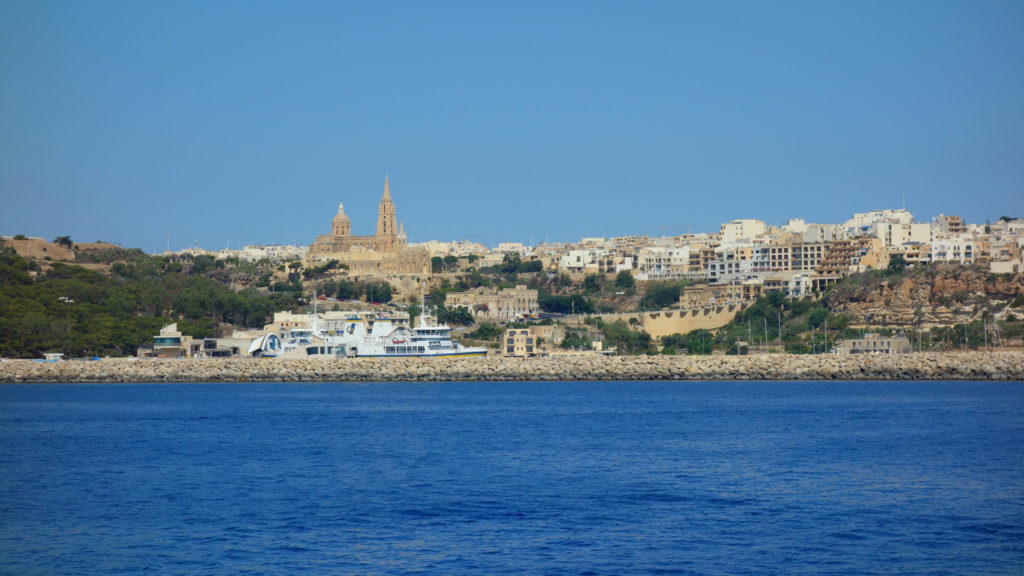 Mġarr is where the ferry takes you when anchoring on Gozo. Gozo is the second largest island in the Maltese archipelago and Gozo has long been thought to be Ogygia in Homer’s Odyssey, where the nymph Calypso held Odysseus captive for seven years. 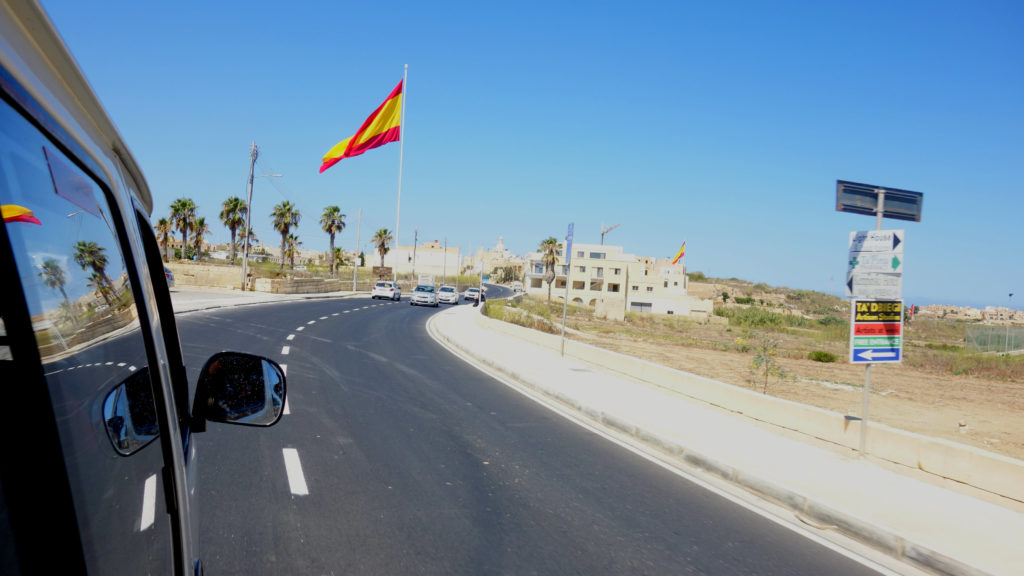 Gozo is more rural than the main island Malta and Gozo has been inhabited at least since 5000 BC. 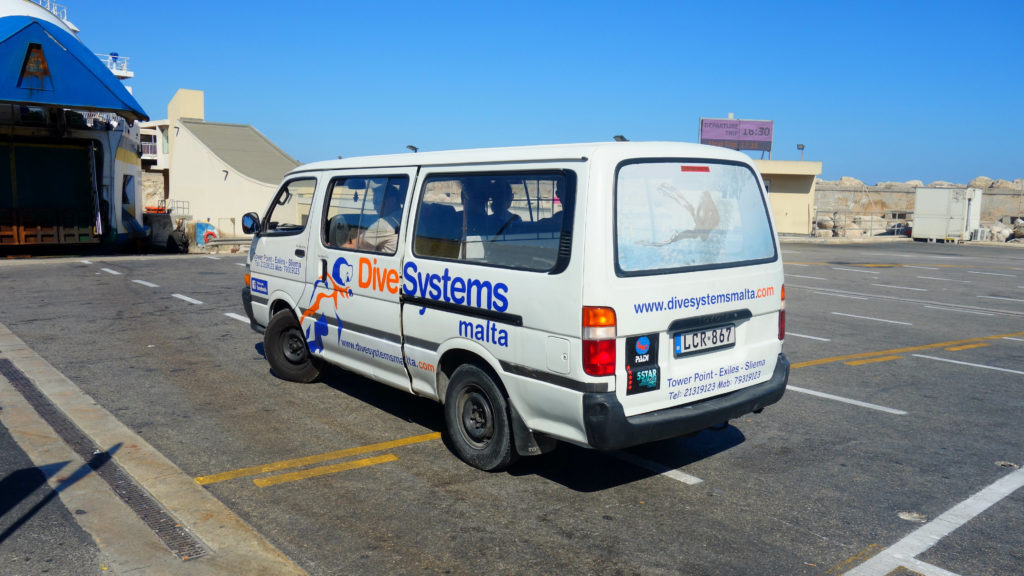 We arrived at Dwejra around lunch time and suited up for our dives. It was really hot this day, as you can see in our videos below. We were curious what we would see below the surface and we concluded that it was different from diving in Southeast Asia and in Central America. However, we loved the limestone underwater caves and the different corals and fishes here. The parrot fish, a common and really colorful fish in SE Asia, where not colorful at all here. The famous Azure Window, that fell into the sea in early spring of 2017, was also interesting to see. The Azure Window was a main tourist attraction of Gozo, but is now laying in pieces at the bottom of the sea next to the Blue Hole. We had two great dives here, then it was time to head back to the main island Malta. 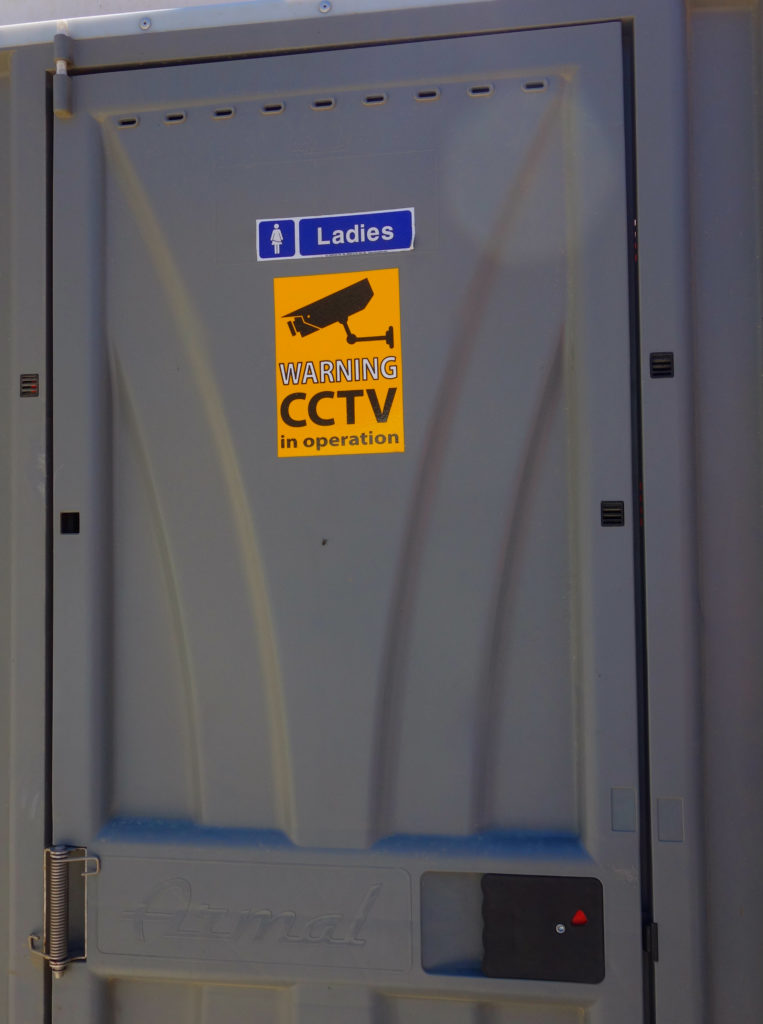 Peculiar thing seen in Gozo – be aware of the CCTV cameras in the toilets :p 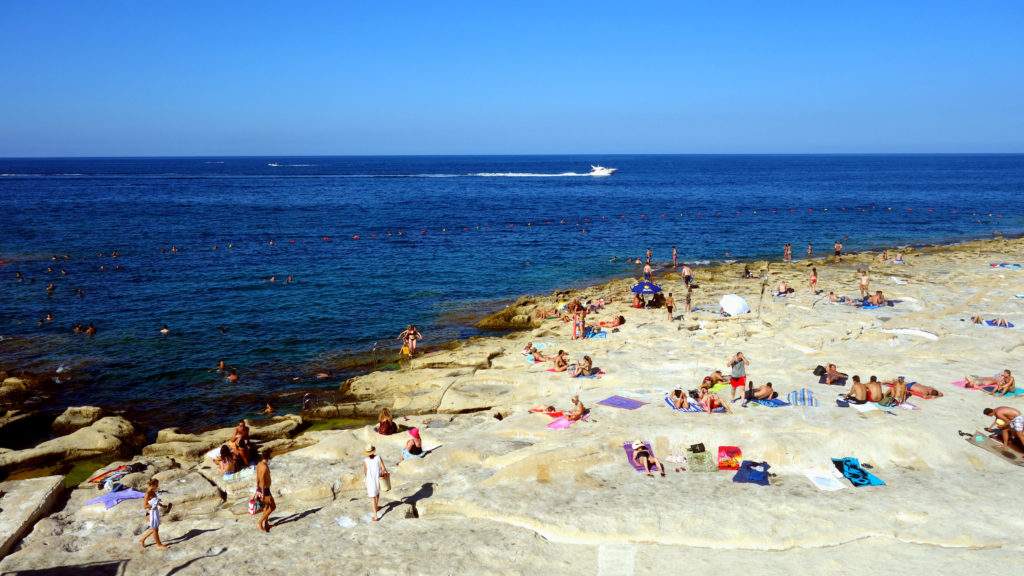 Back to Malta and the sunbathers! If you want sand beaches instead of cliffs, go to Gozo or Comino! 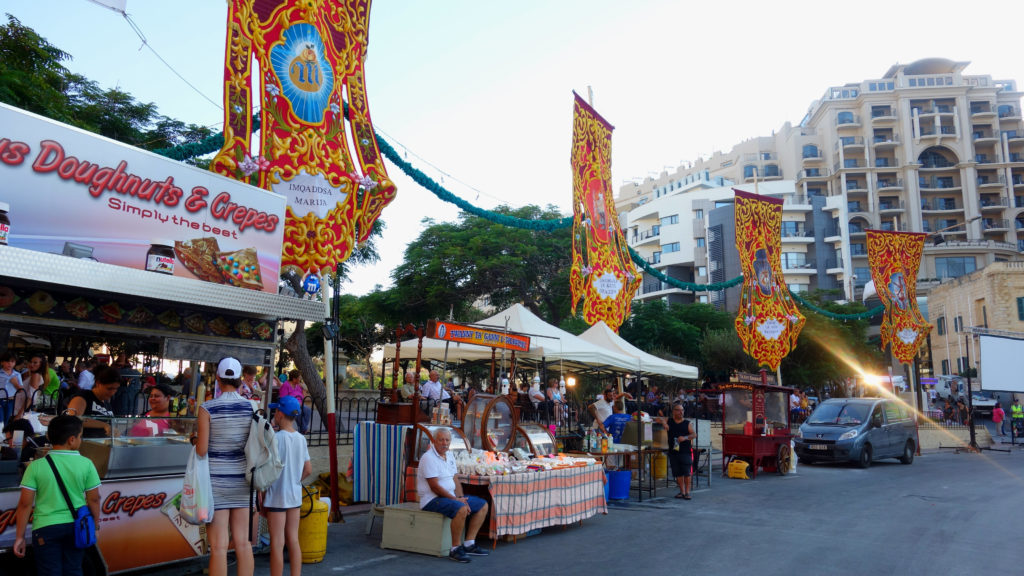 We also had time to participate in the Balluta Parish Our Lady of Mount Carmel – festival, which happened in Balluta bay in the end of July 2017. 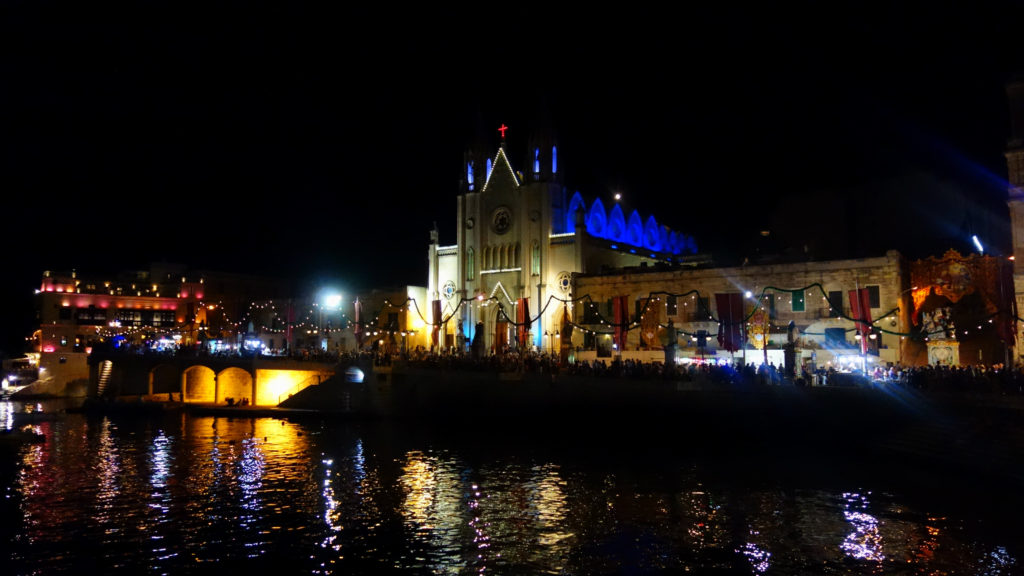 The first Carmelite friars went to Balluta bay on the 22nd of May 1890 and first had a small church, but the increasing number of followers made it so that they had to rebuild the church many times since then. This is the current church today, standing in S:t Julians. 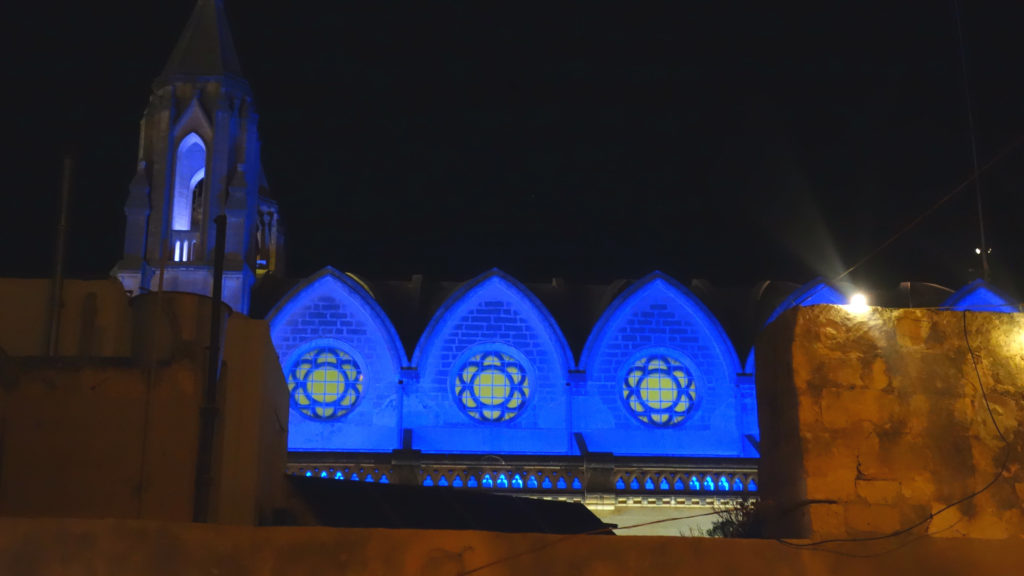 Close up on the top windows in the church, looks kinda like a scary movie with this light setting. 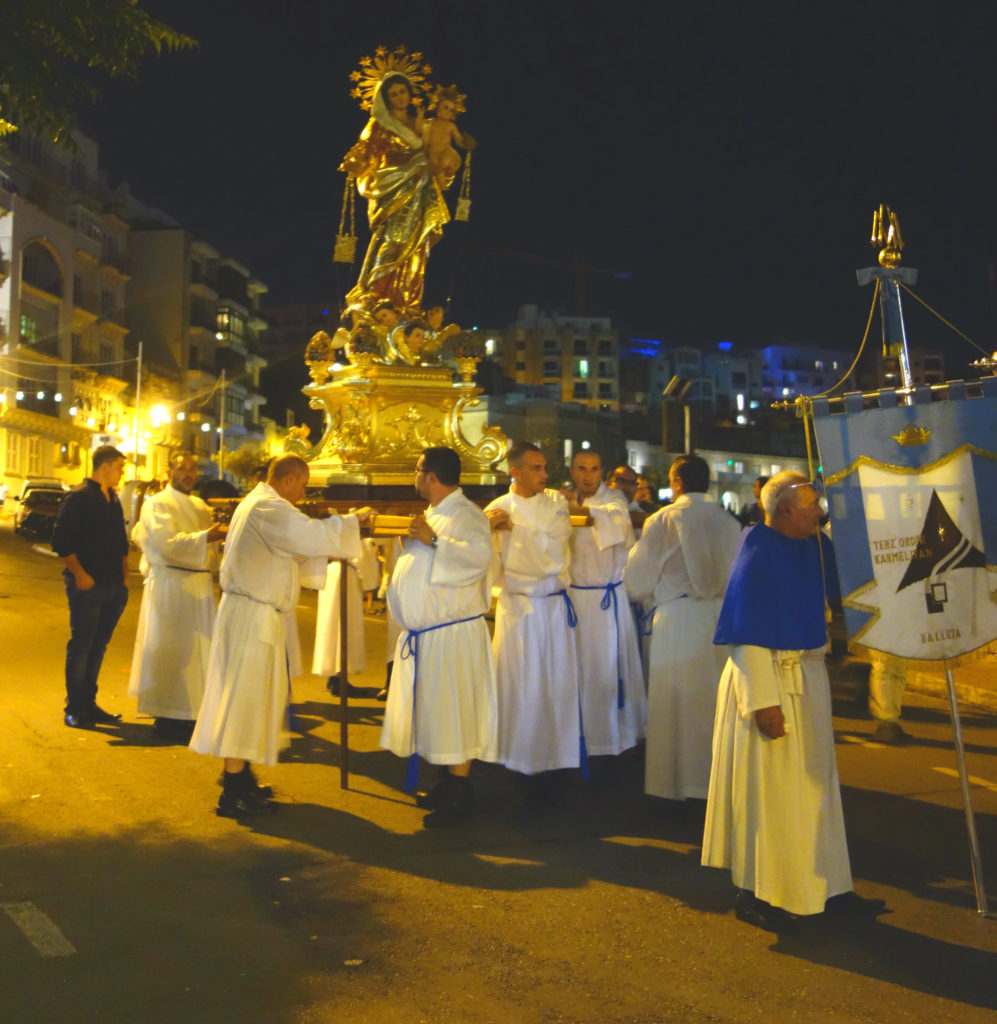 “Our Lady of Mount Carmel” or “the Blessed Virgin Mary in her role as patroness of the Carmelite Order” is what is celebrated during this festival. Here, the friars carrying around a statue of her at the festival. 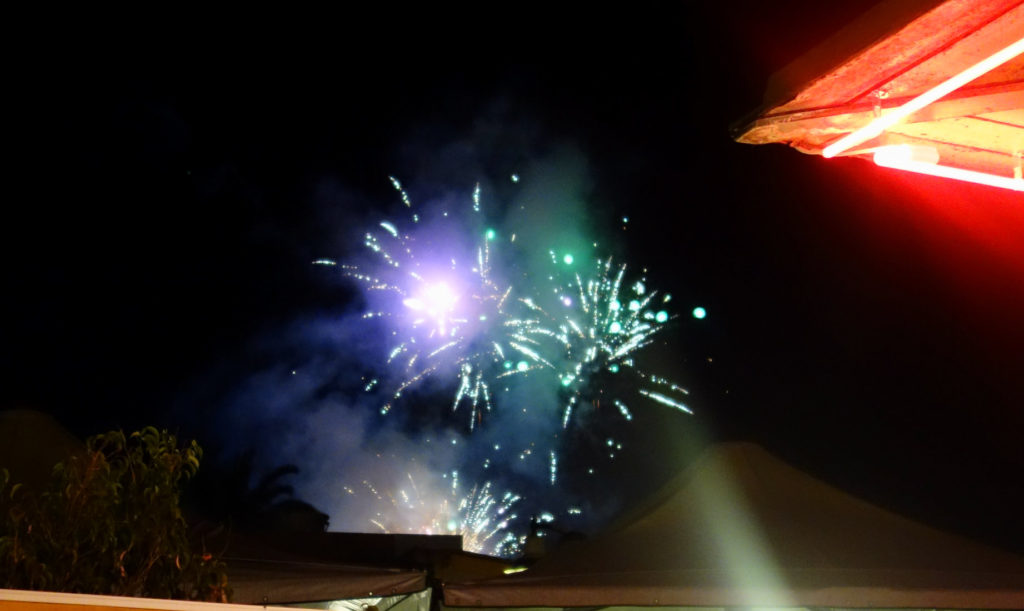 The festival ended with fire works and our time on Malta ended here as well. 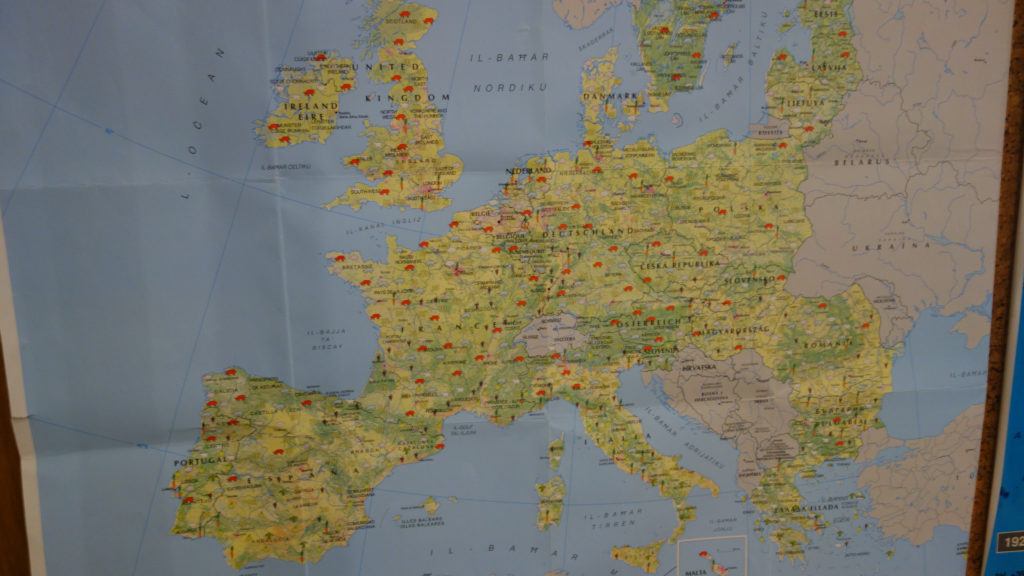 We said goodbye to Malta and headed North again, this time to Prague visiting our friends there.  Our hostel had an interesting map of Europe hanging on the wall, picturing the main products of agriculture in different parts of Europe.