The windmills of Zaanse Schans

We visited Zaanse Schans after this village was decided to be the place for a small bubb.la meet up with a Swedish/Japanese family that we wanted to meet. We always try to meet up with like-minded people when we travel around in the world and here in the Netherlands a few fellow bubb.la members currently live.

Zaanse Schans is a village with historic wooden buildings set up with the intention of preserving the historical heritage of the Netherlands. Many of the buildings here were relocated to the Zaanse Schans expansion plan between 1961 and 1974, and restored to their former glory. Only a few of the windmills are still on their original property. It feels like an amusement park, because of the many tourists coming here (2.2 million visited in 2017).  We bought the Zaanse Schans Card 15 Euros (10 Euros for children between 4- 17 and below 4 for free). With the card you can visit several museums free of charge for an entire day. However, the windmills you still have to pay for to enter (5 Euros to enter each windmill). 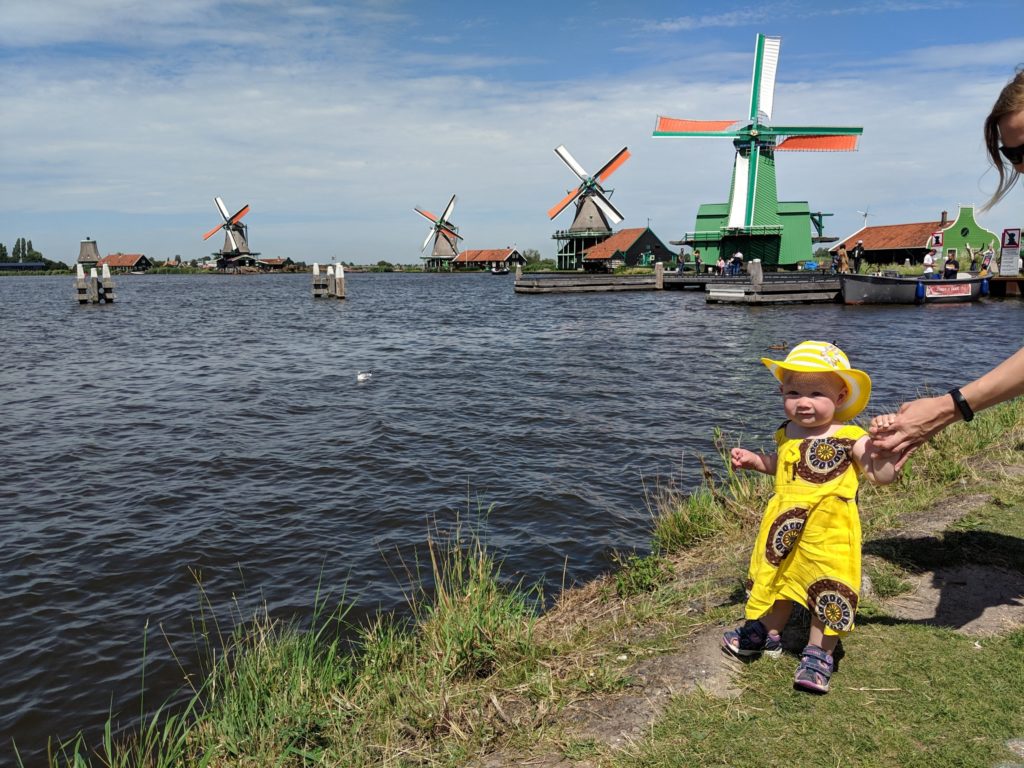 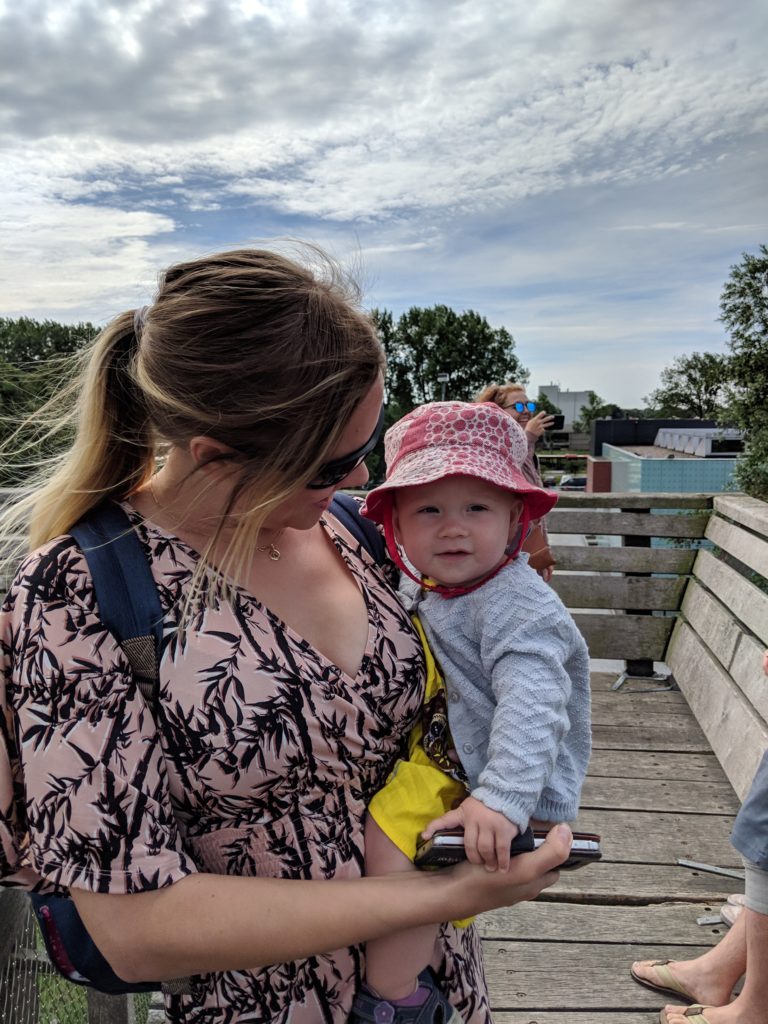 We came to Zaanse Schans in the morning when the weather was a bit colder, but the prognosis was promising sun, so me and Othilia had dressed for that. 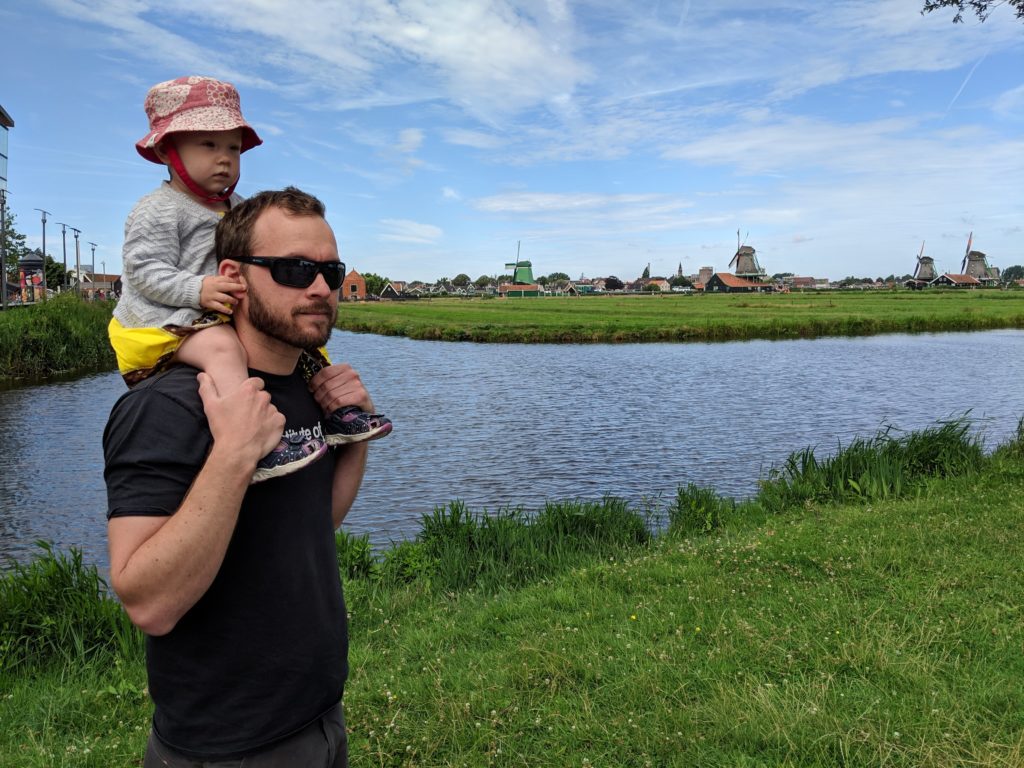 We were waiting for our company of today a fellow bubb.la member that we have wanted to meet as soon as we knew we were going to the Netherlands. 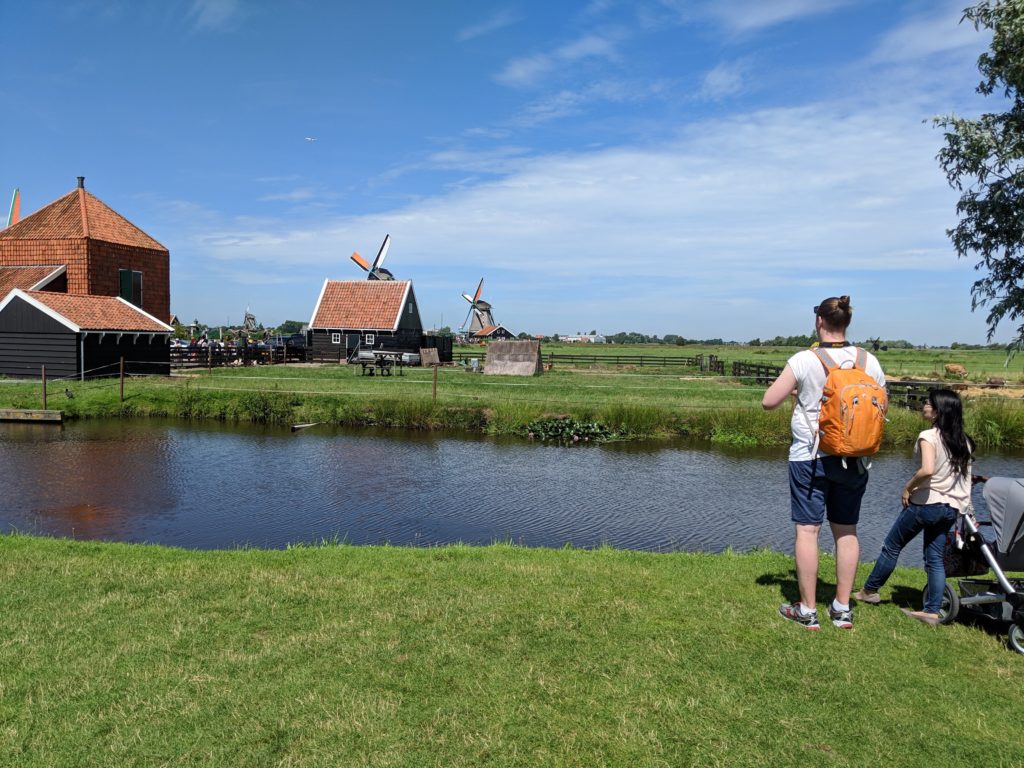 Stefan, Aki and their daughter came with the train meeting us and it was so fun to spend a day with this family, we would love to do it again someday. 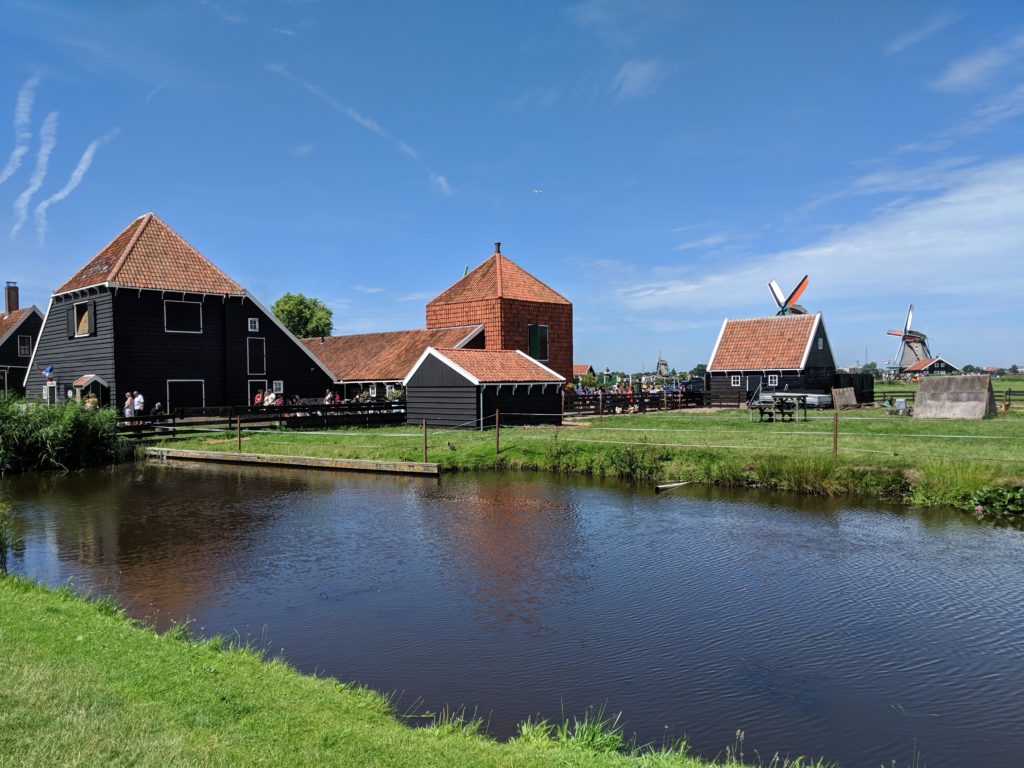 Zaanse Schans is a created windmill park with old windsmills transported from the whole country to be in the same place. It feels more like an amusement park for tourists, than a genuine village, but the windmills are still running and you can walk into them if you pay 5€ at each entrance. The other houses are museums, some are free and some you need to pay an entrance fee to get in, and others are restaurants, cafes and shops. 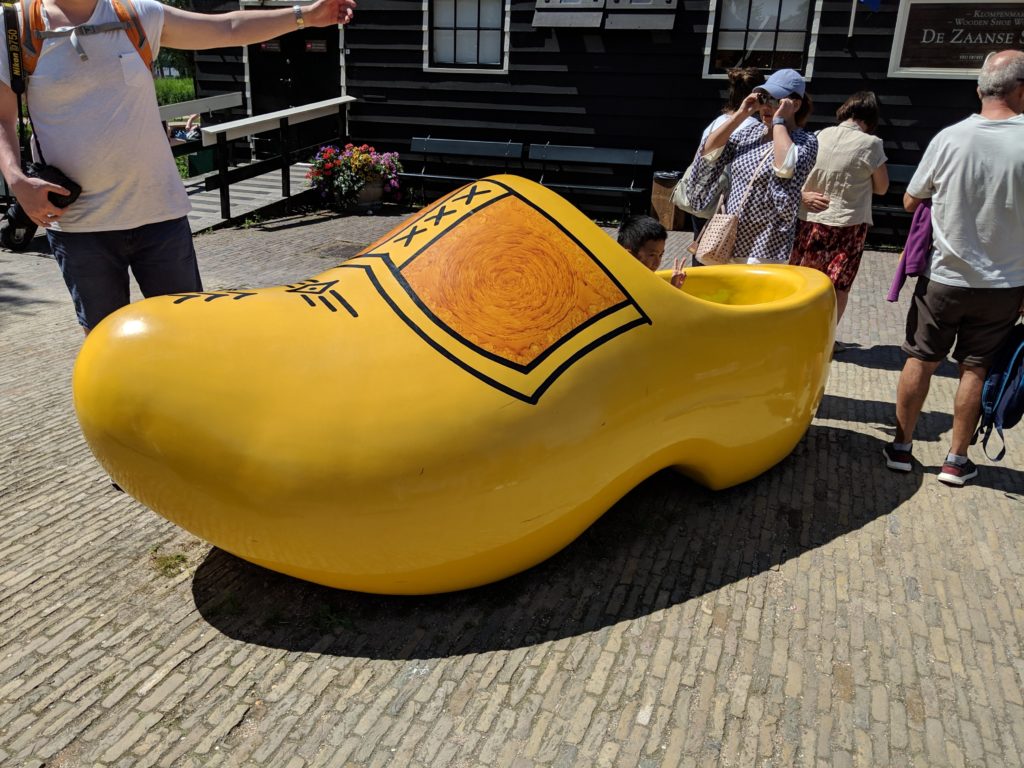 The Netherlands are known for clogs (Klomp in Dutch) and we have actually seen normal people walking in those in supermarkets. There is actually a clog making man in Zaanse Schans and a clog museum is a part of his working place. 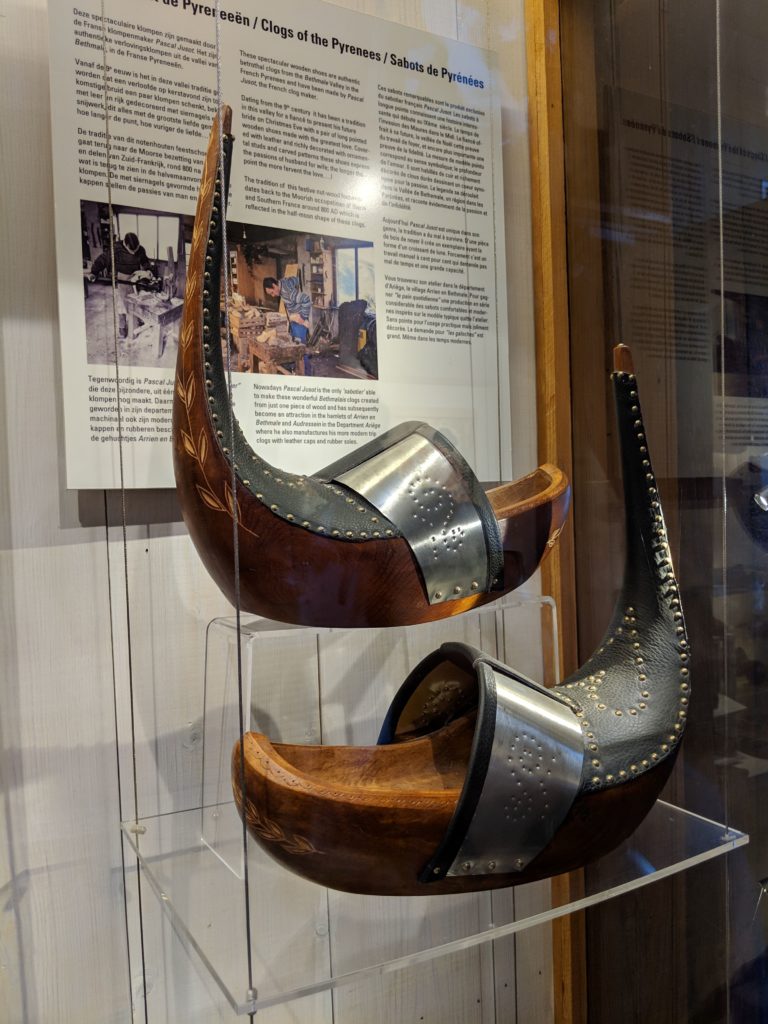 Clogs in all forms can be found here. 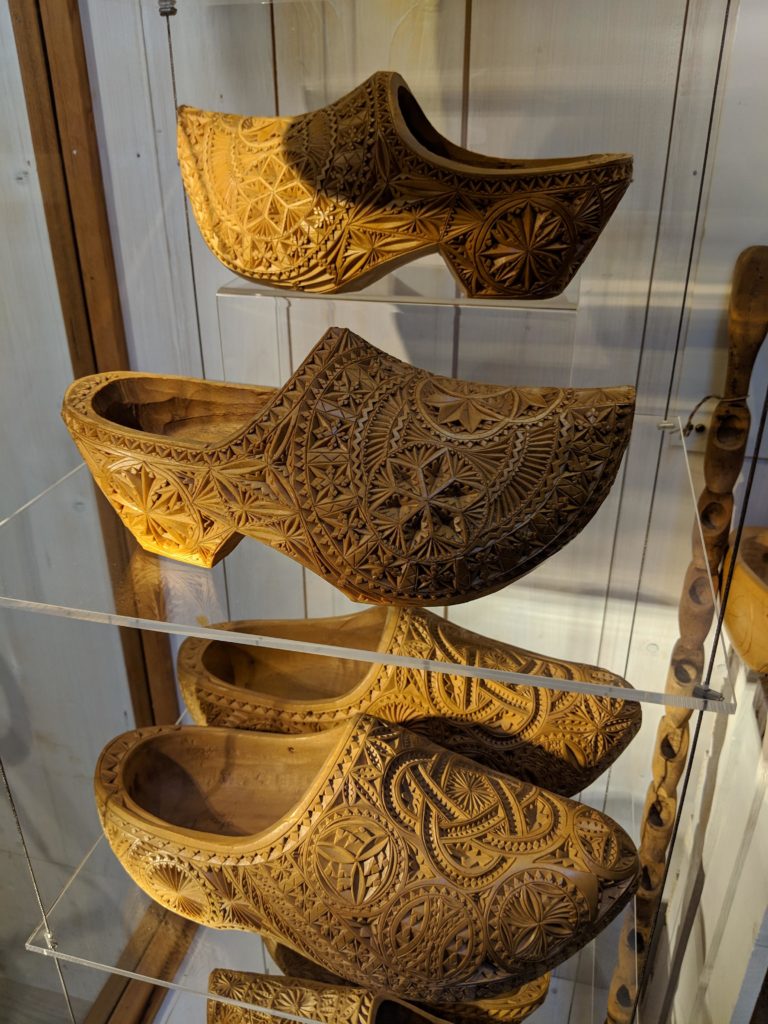 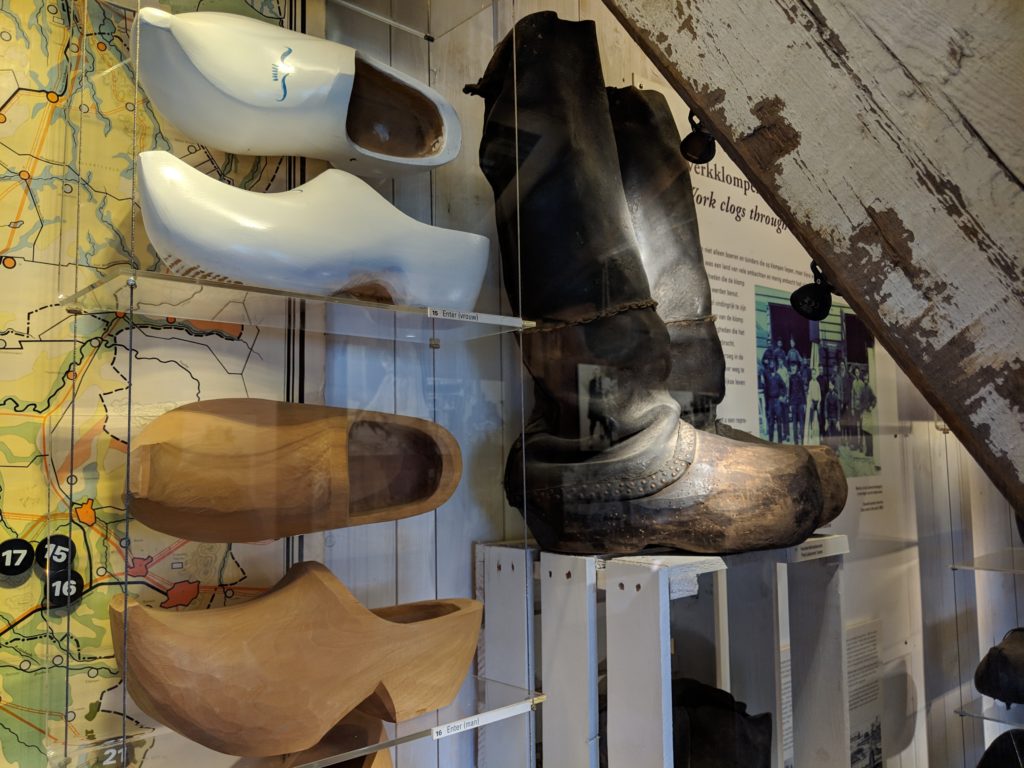 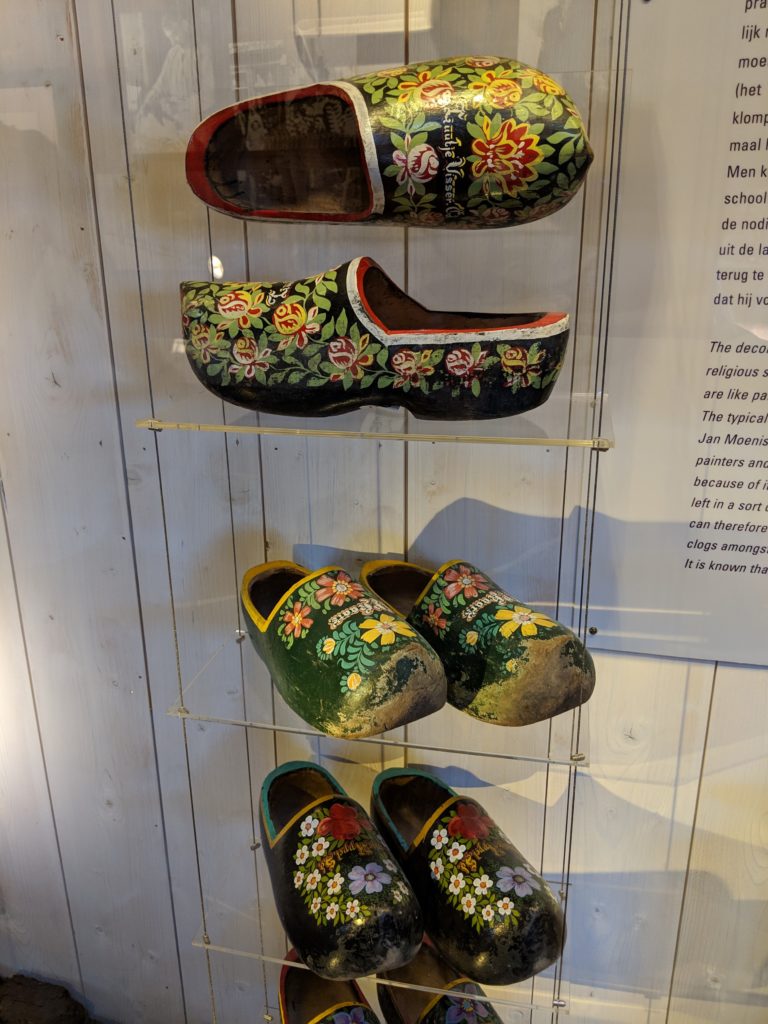 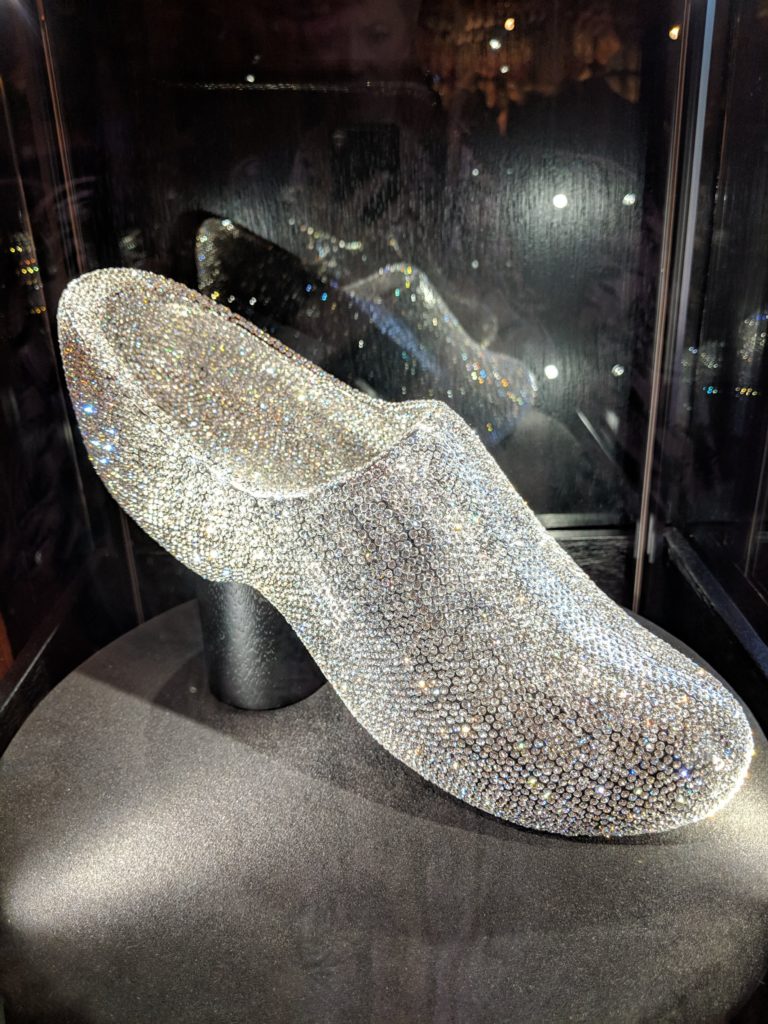 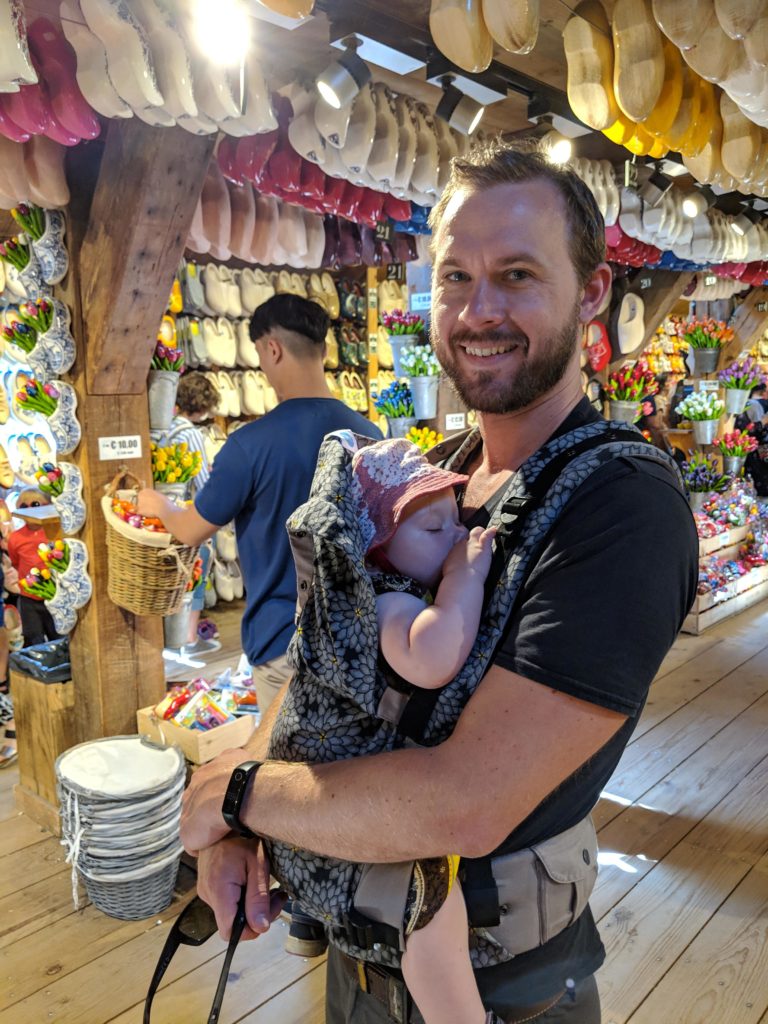 There were a lot of clogs for purchase as well, not just for show! 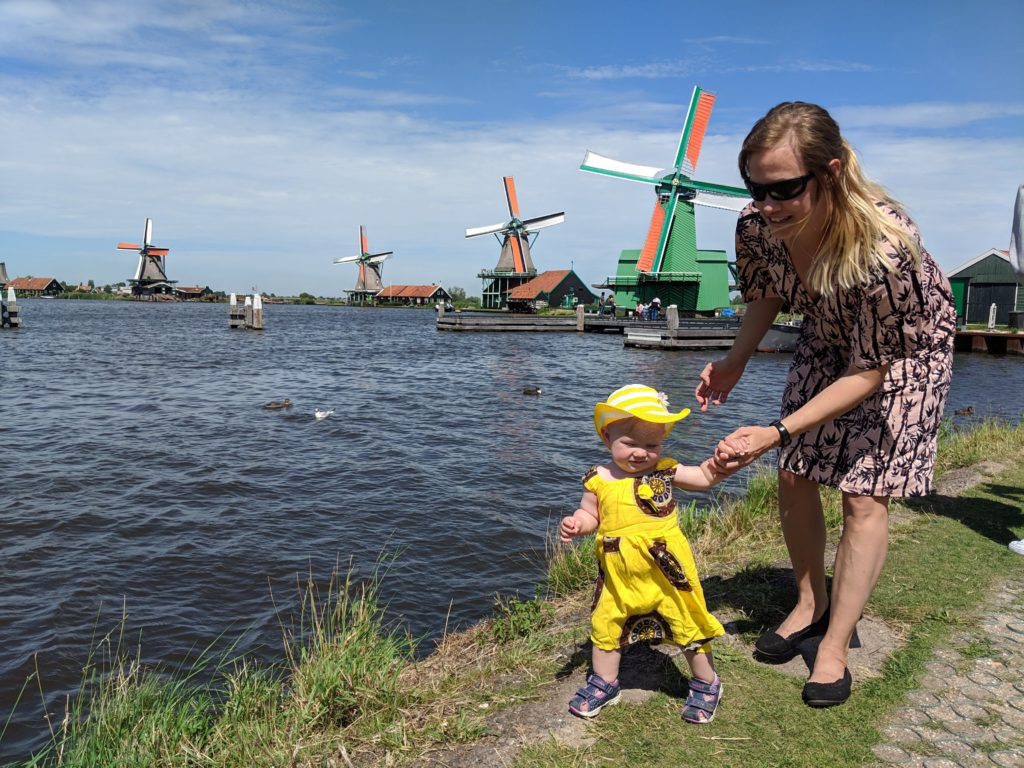 Putting Othilia in place for the photoshoot I had planned with her dress from Bali, bought by mormor (grandmother) approximately half a year before Othilia was created. The problem was that Othilia only wanted to walk into the water so we had to act fast. 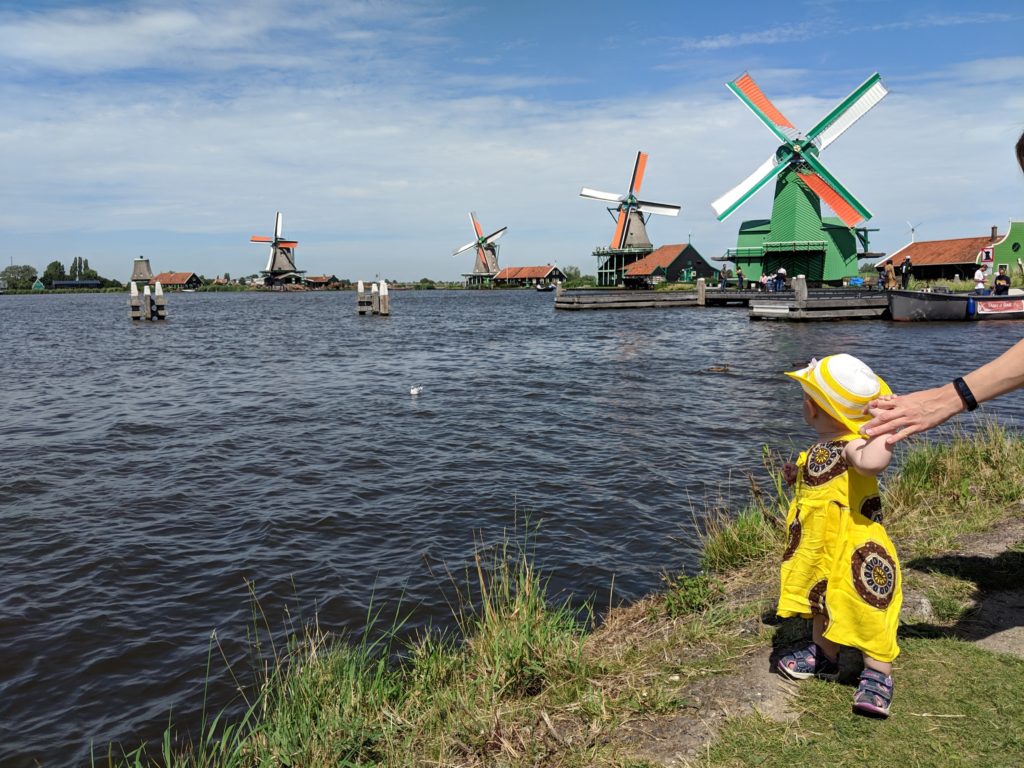 The hat were on her head for approximately 20 seconds before it ended up in the water. The hat was rescued by Stefan, but most of all quick thinking by Aki. 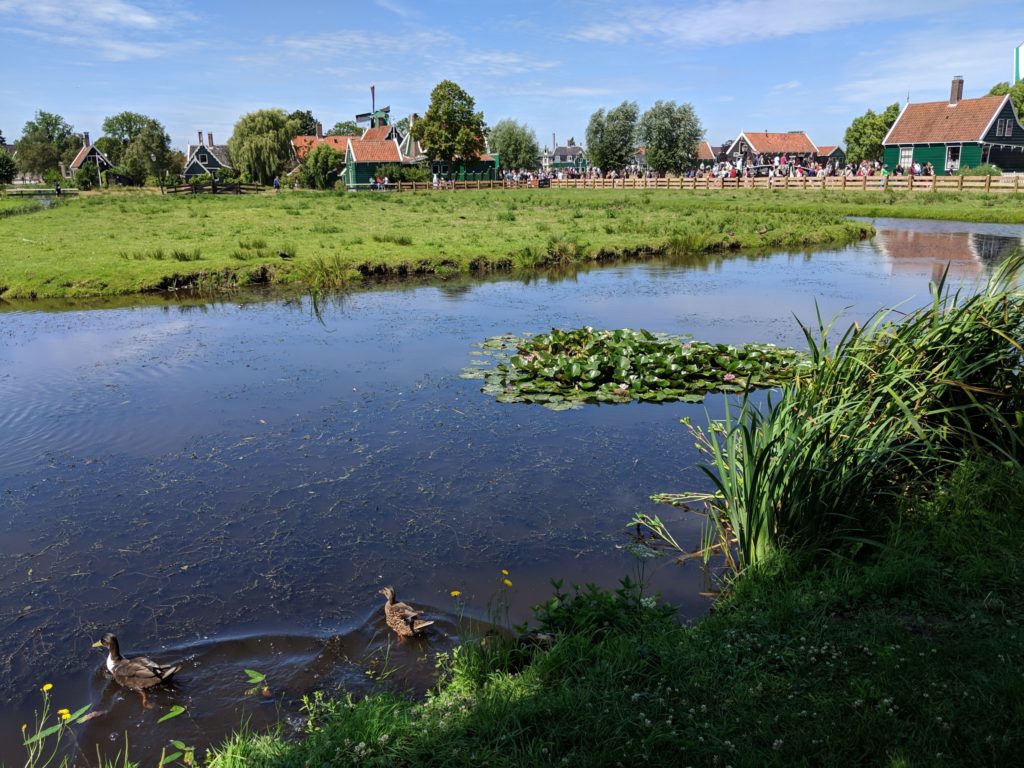 Next to the mills you have other historical buildings that have been transported here. 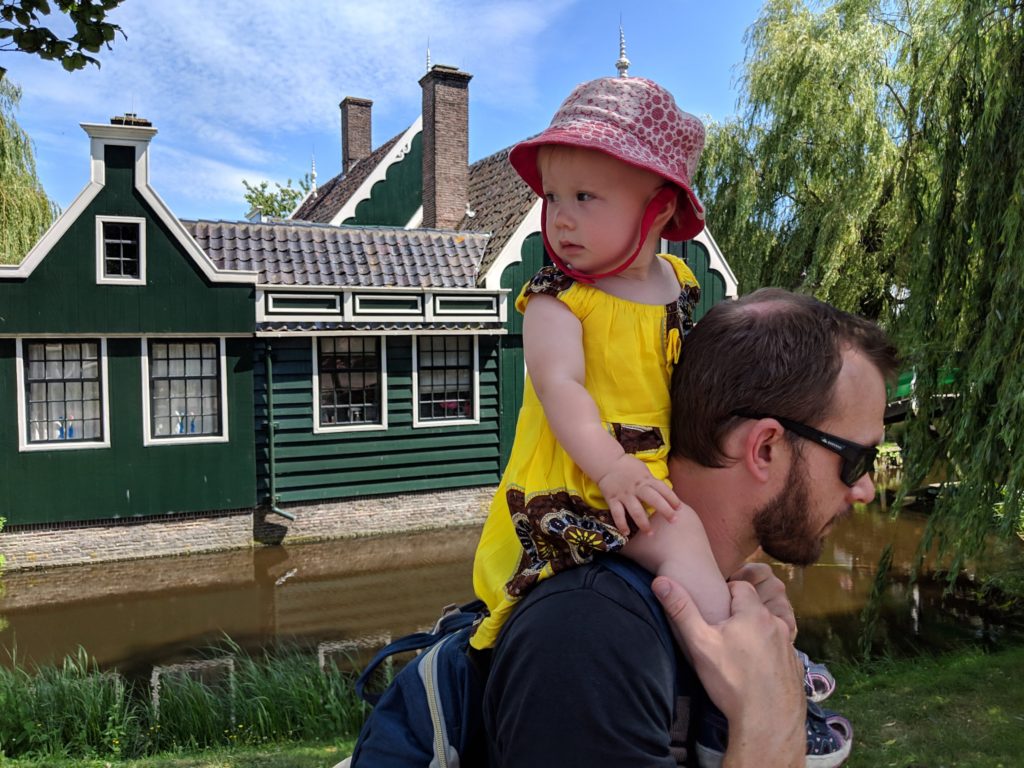 We decided to walk around in this part to take photos. We had so much to talk about with Stefan and Aki so we didn’t want to end the day to early. Othilia got the other hat, while the yellow hat was drying. 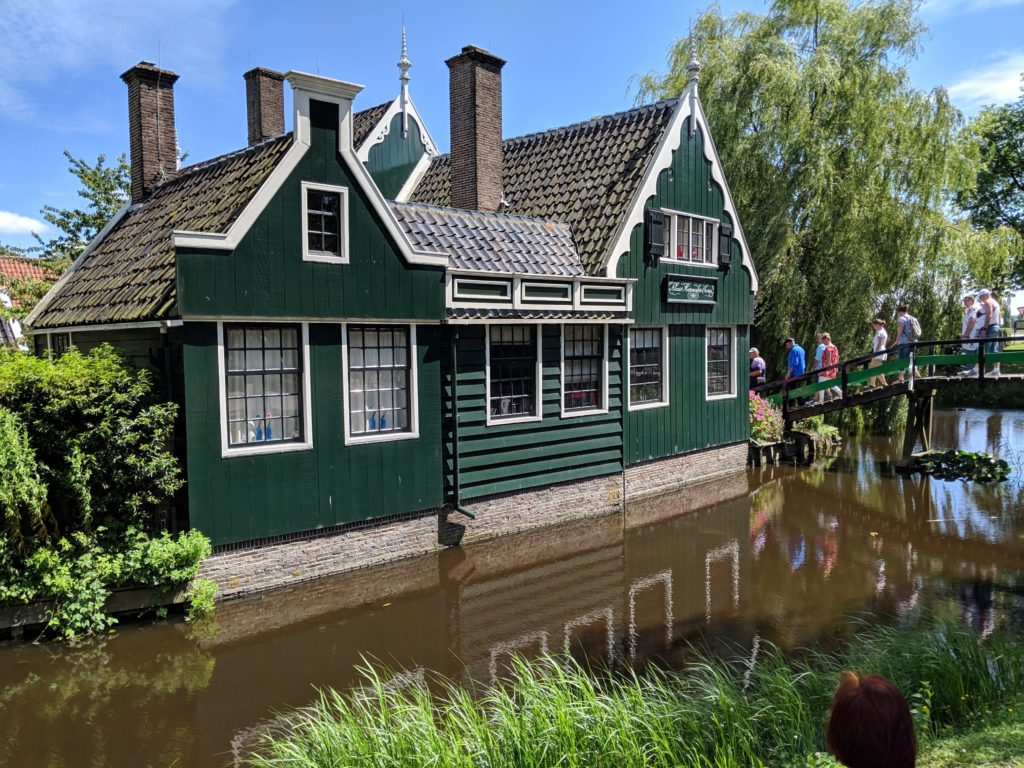 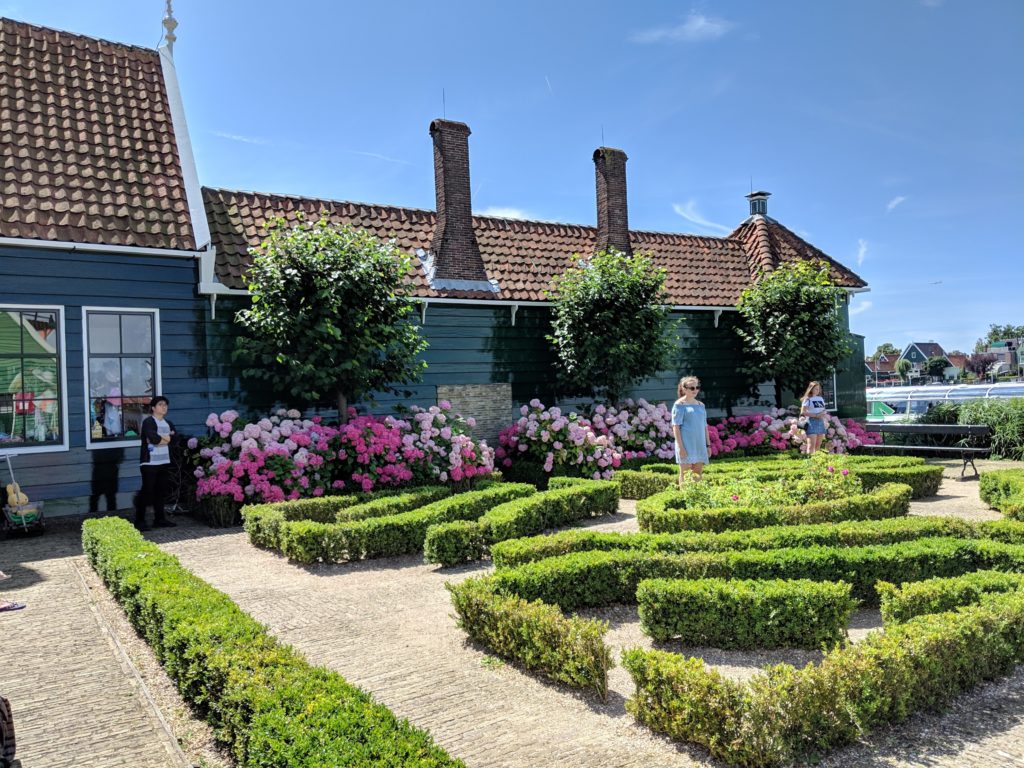 A garden in Zaanse Schans! 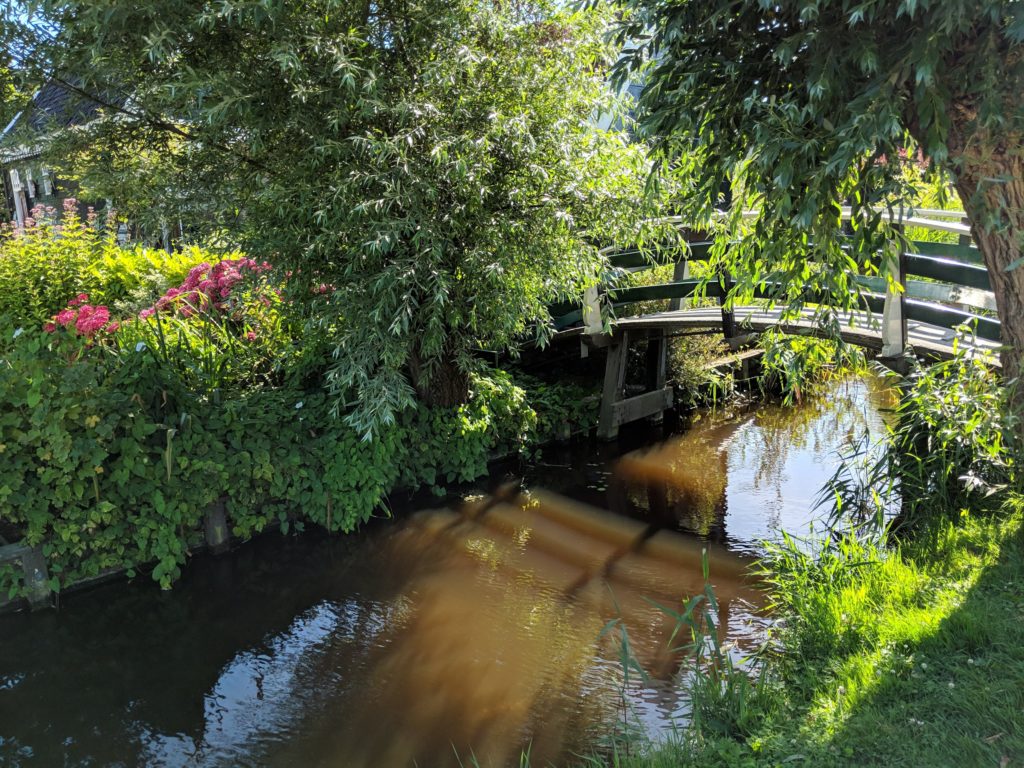 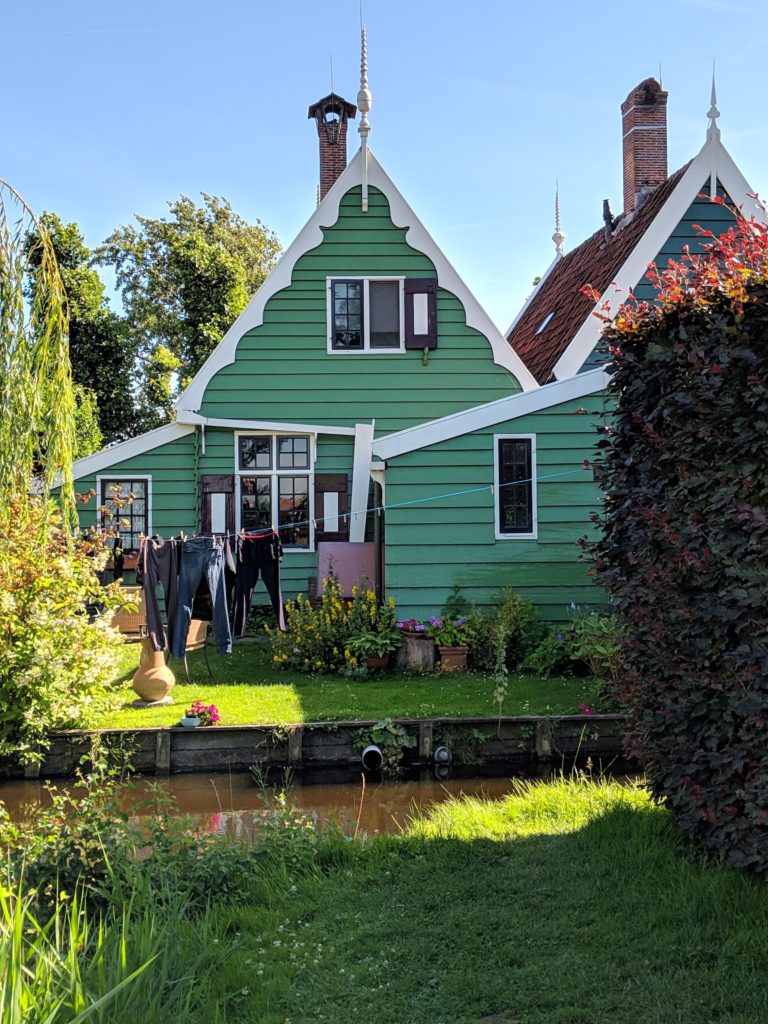 It looked like at least some of the houses here had people living in them! 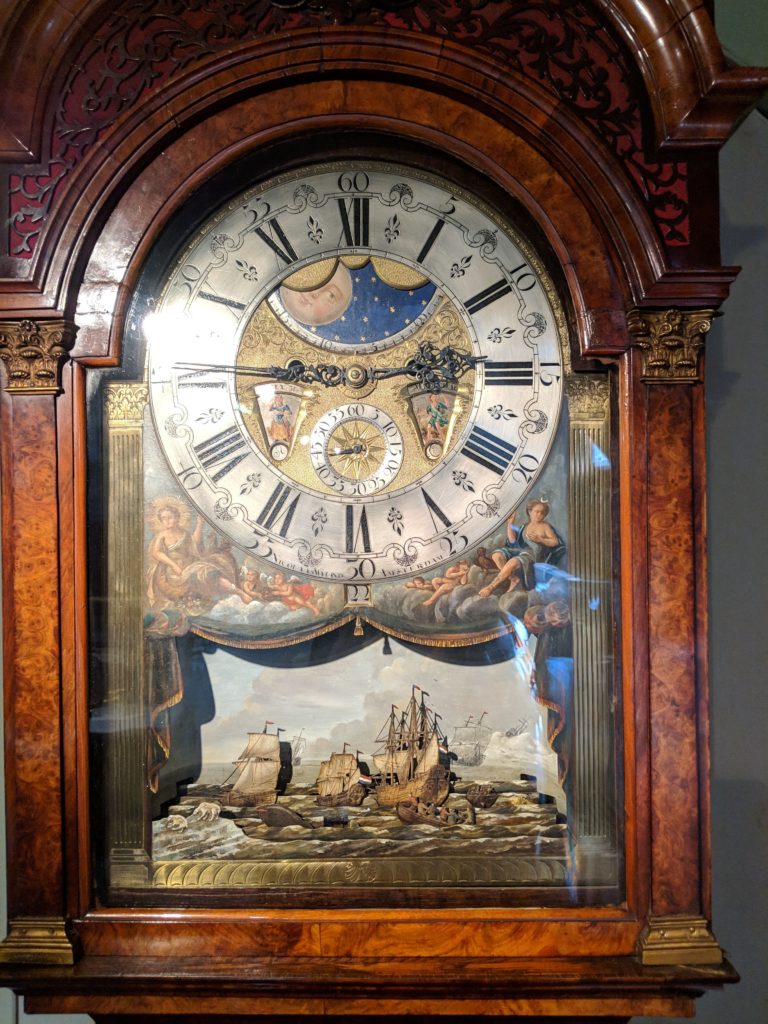 We visited the museum of Dutch clocks and we could appreciate the craftmanship and work dedicated to these clocks. The boats and whale in the lower part of the clock was actually moving. 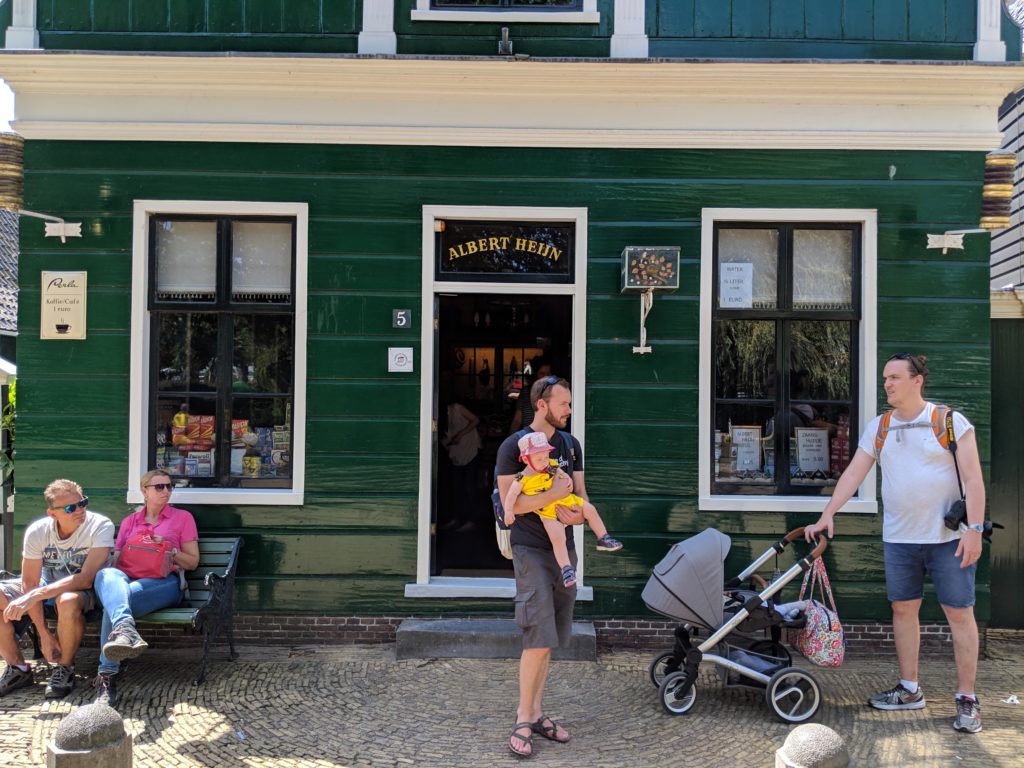 The first store opened by Albert Heijn, the largest supermarket chain in Netherlands, has also been moved to Zaanse Schans. The store orginally opened in 1887 in the town of Oostzaan. We said goodbye to Aki and Stefan for this time around, but we would meet Stefan again a few days later.