We ended up in Tallinn after a short stop in Sweden for family reasons. We went from Barcelona to Sweden and therefore we could take one of the night boats, a.k.a party boats, over to Estonia. We have been in Tallinn before in 2014, before we departed on our big journey, so it was familiar grounds to walk on for us.
We had important things to do here, but we also wanted to explore the city, so we used our favorite web site, Atlas Obscura, to find interesting and unexpected places to see here. That is how we ended up at the oldest pharmacy still operating in Europe. 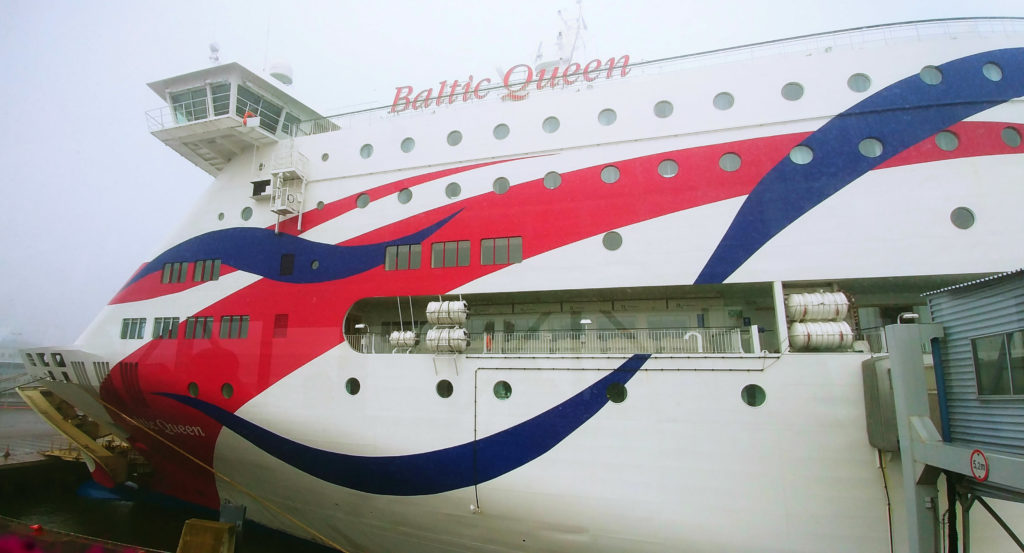 We took the Tallink boat “Baltic Queen” from Stockholm to Tallinn. One night sleeping on the Baltic Sea before arriving to Estonia. 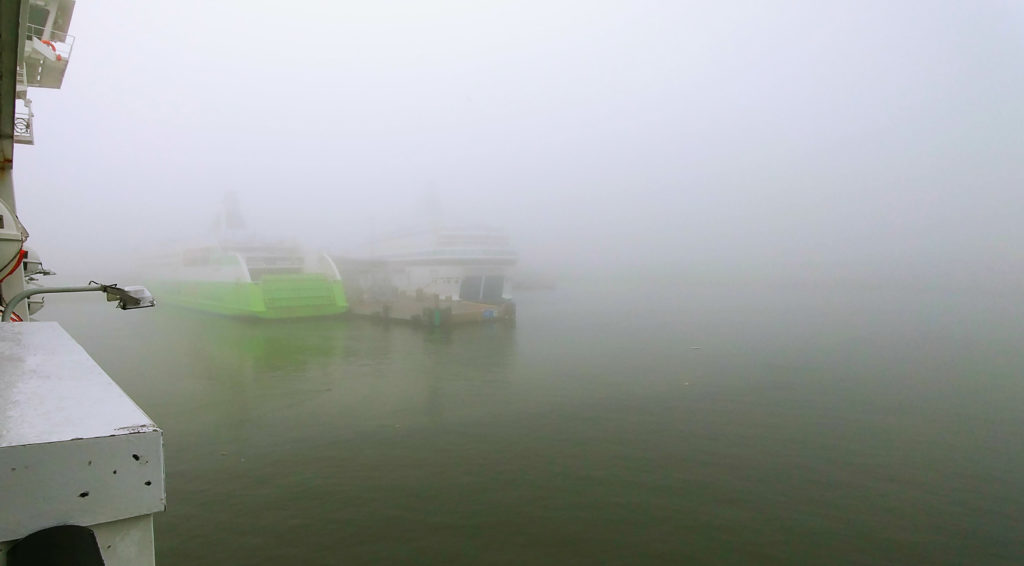 Tallinn greeted us with immense fog and we could barely see land while approaching Tallinn. 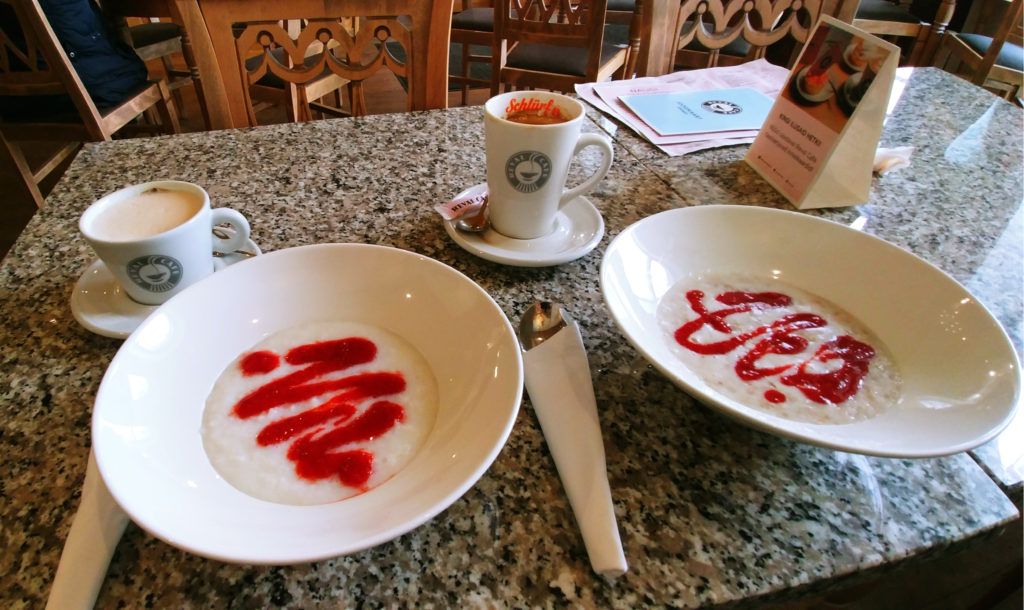 We spent our first morning eating breakfast at Reval Café – Reval is the old name of Tallinn. 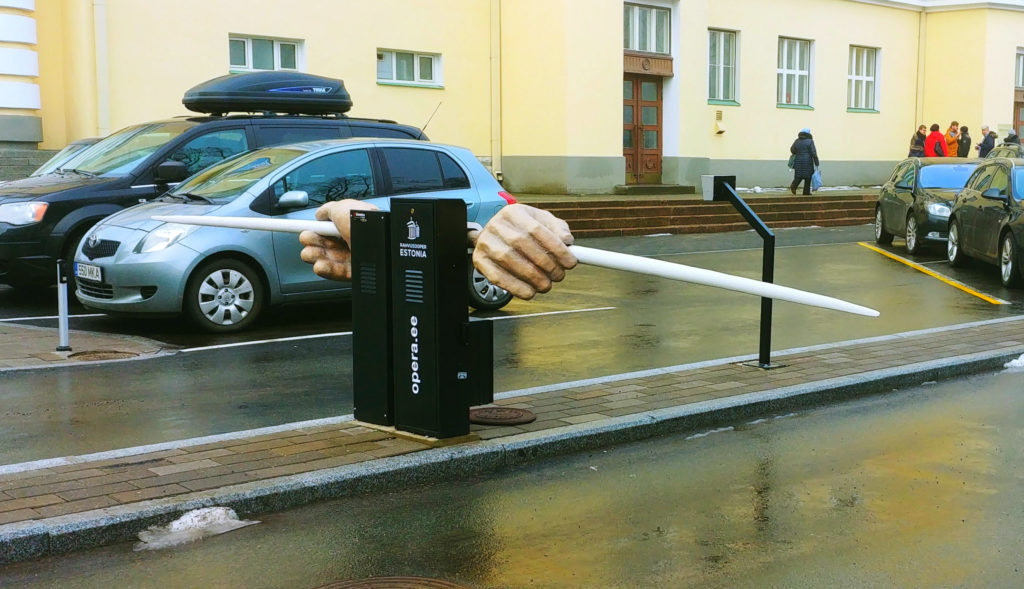 We walked passed the Opera in Tallinn on our way to our accommodation and they had suitable parking barriers. Ulrika got sick during our travel to Estonia so we didn’t do much the first couple of days here in Tallinn. 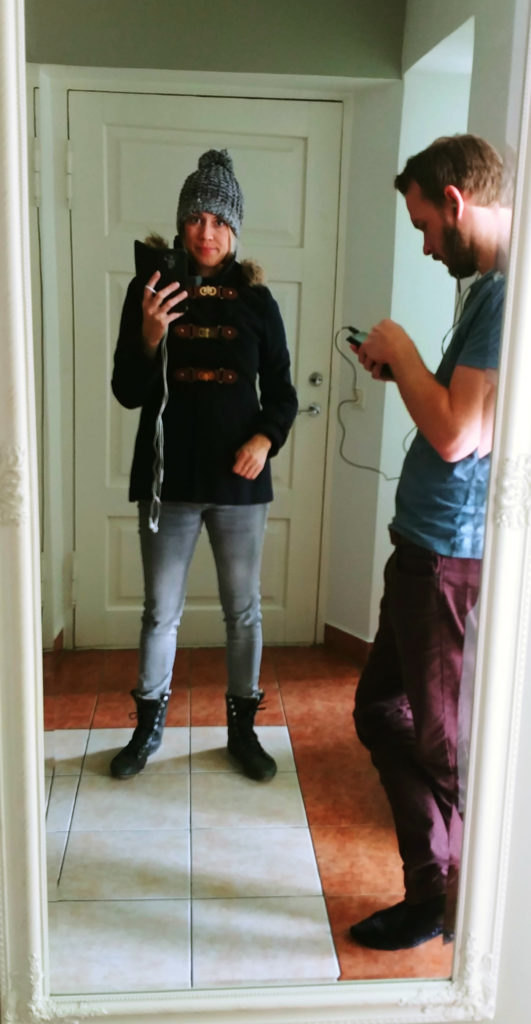 A few days later a pregnant Ulrika felt better, and the weather had gone from rain and snow to sunshine, so we took our first short walk around town and visited the oldest pharmacy in Europe and Tallinn’s oldest Café. 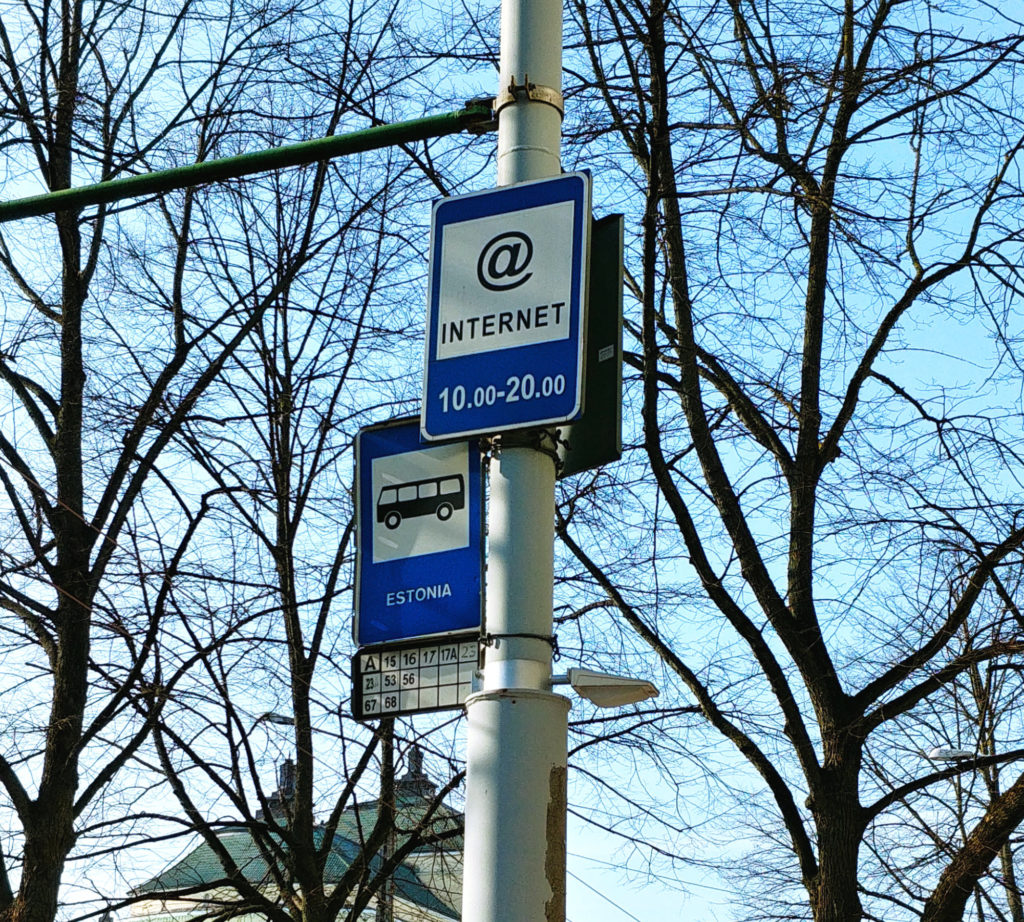 We found this sign while walking to old town of Tallinn. There is a public wifi available in town, which only works during certain hours of the day. The public transportation system in Tallinn is easy to figure out and cheap. 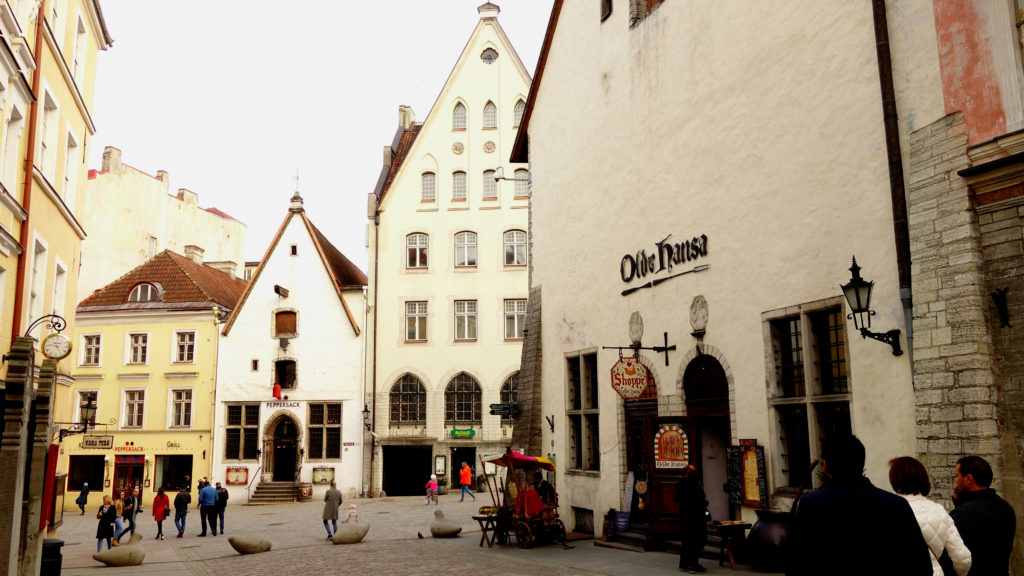 We got to old town and now it was time to find the Raeapteek pharmacy museum. We had found the museum through our favorite web site, Atlas Obscura. 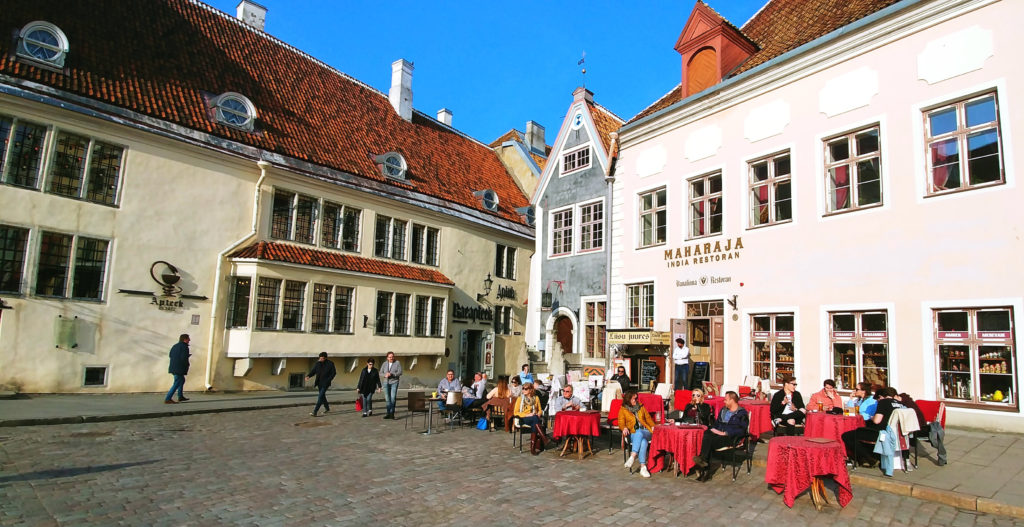 The Raeapteek has been in business in the same house located at the corner of the town hall square since the early 15th century. 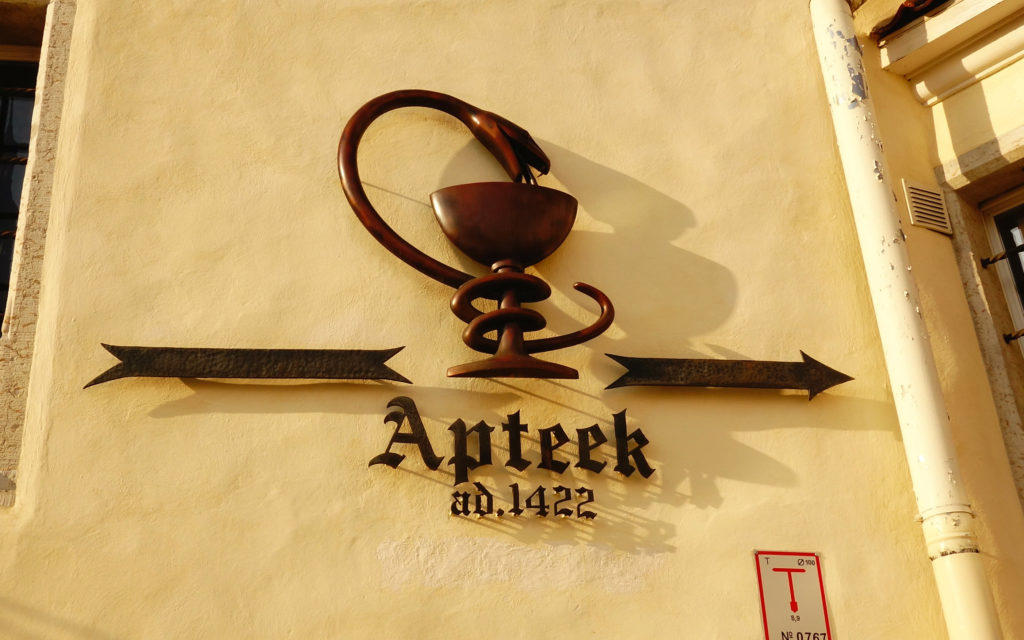 The oldest records of the Raeapteek found state that the Raeapteek was already on its third owner in 1422 and historians think that the opening year of the pharmacy was around the year 1415. 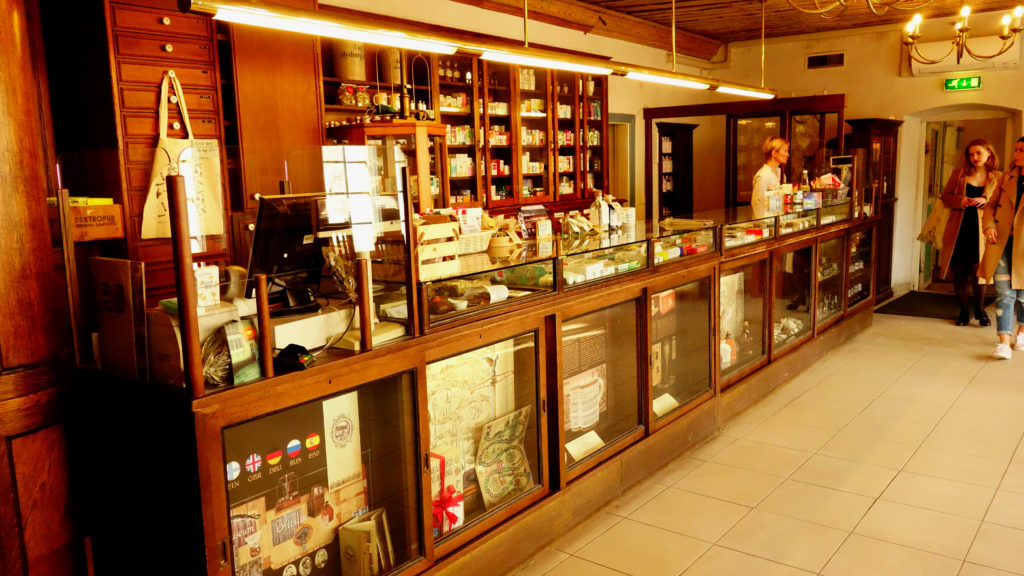 Today the Pharmacy is still in business, but it is also a museum that you can enter for free to learn about its history. 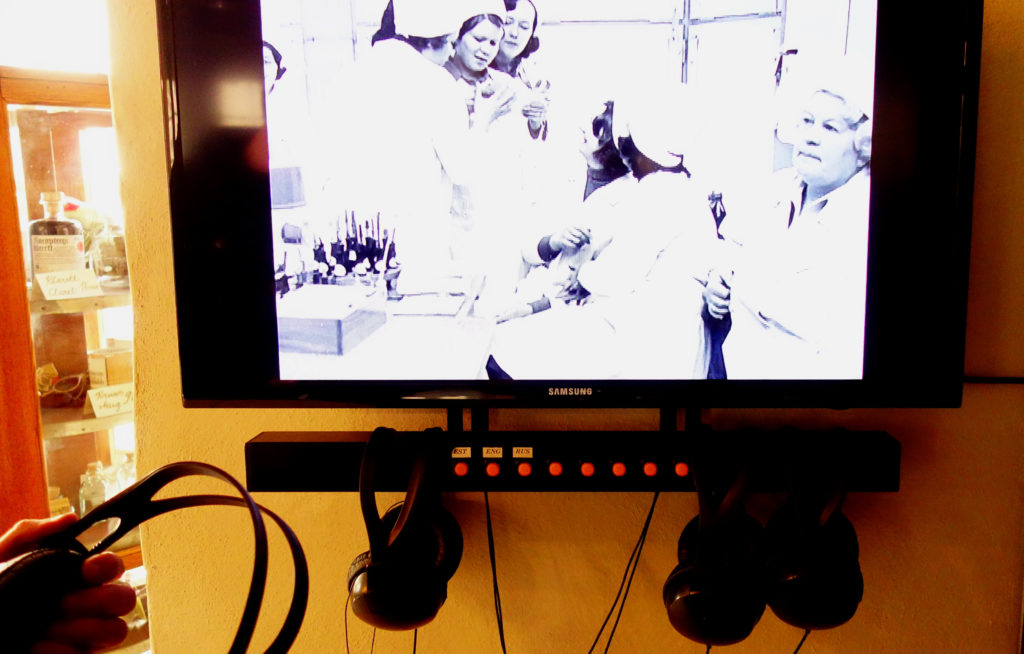 A movie, English subtitles can be chosen, about its history is well worth your time in the pharmacy. 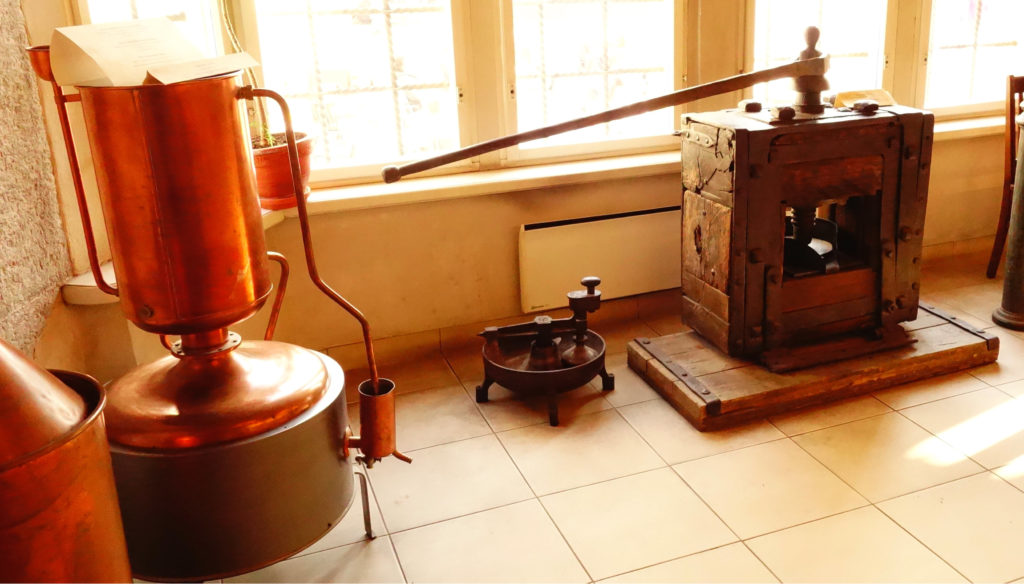 The Burchart family is the people associated with the pharmacy’s history. The family had the business for over 325 years, spanning over 10 generations, from around 1582 to 1911.
Around 1580, the Hungarian Johann Burchart moved to Tallinn and he got the chance to lease the pharmacy. He started the family tradition of giving the first-born son the name “Johann” and the first-born son was expected to carry on the family business. 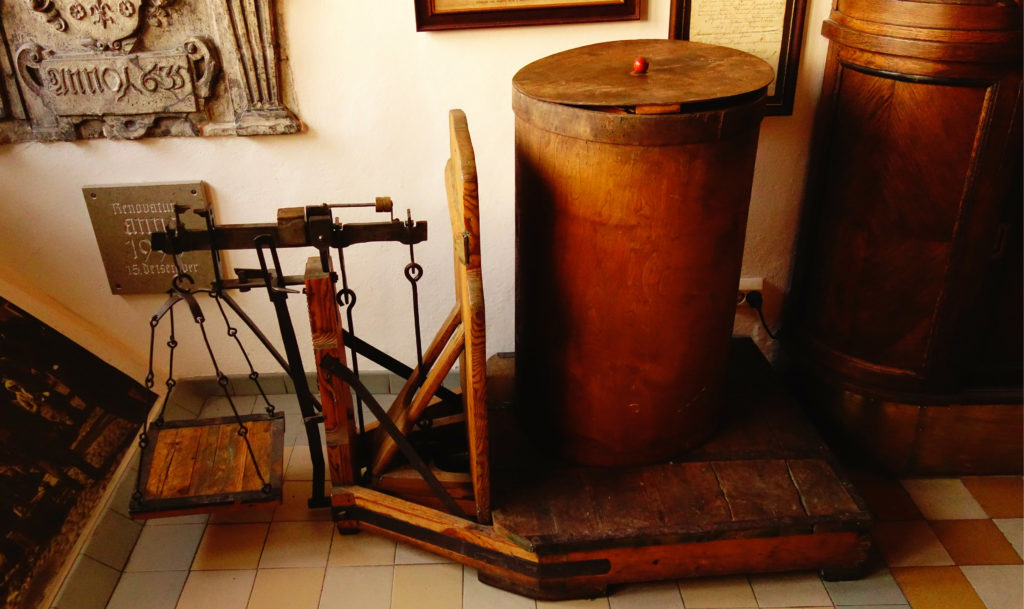 Johann Burchart the IV could finally purchase the pharmacy from the city council In 1688. The Burchart’s family pharmacy business came to an end in the 1890 when the last male heir of the family, named Johann X Burchart, died and his sisters sold the pharmacy in 1911 to a C.R. Lehbert. 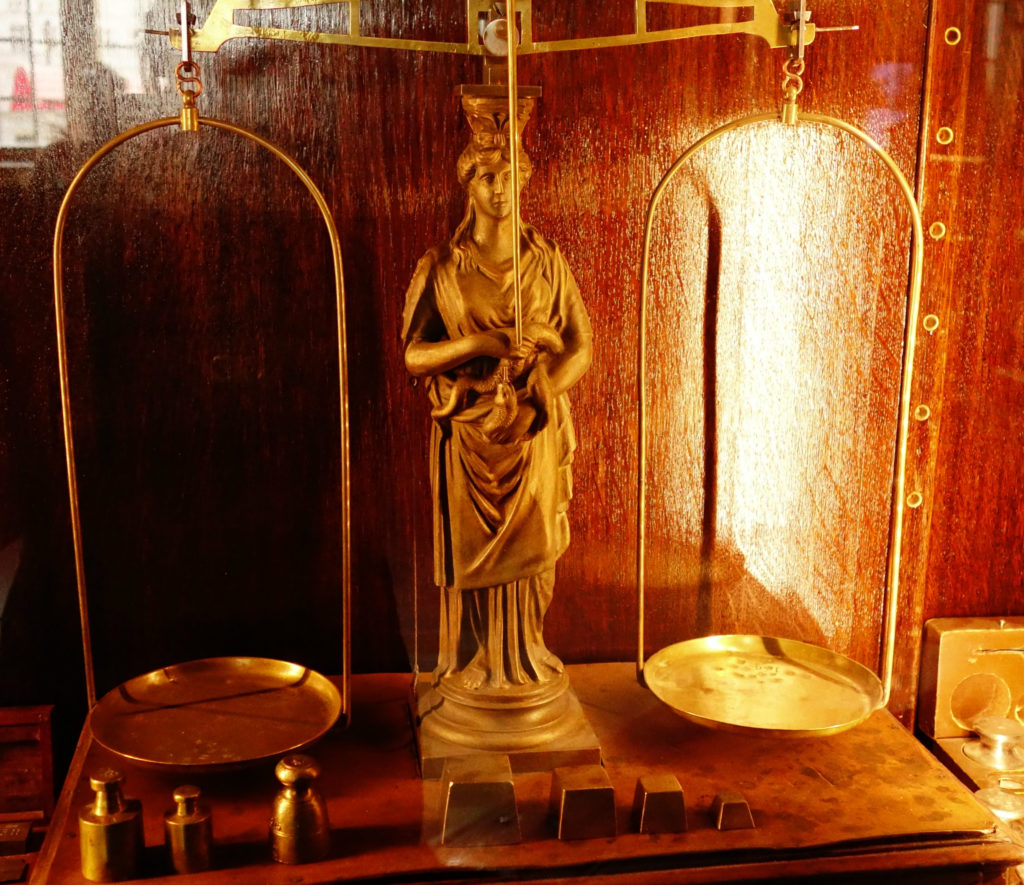 Sadly for C.R. Lehbert, communists entered Estonia and the pharmacy was nationalized in 1944 when the Soviet Union re-occupied Estonia. 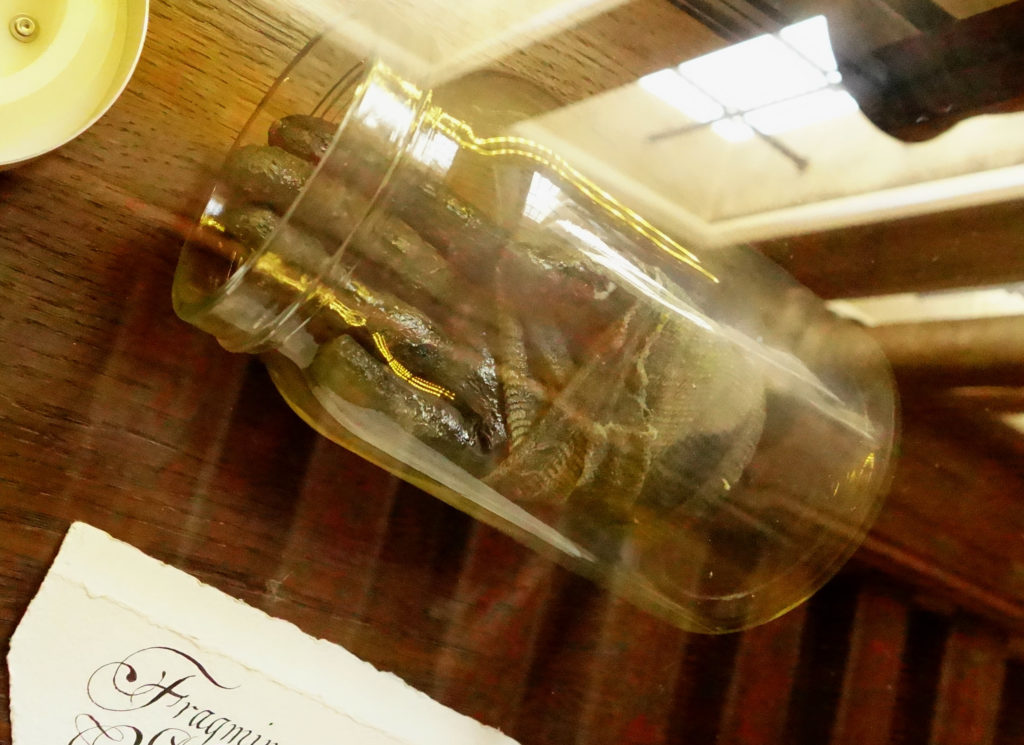 The pharmacy has had a interesting history of products for purchase.
Customer have been able to buy mummy juice (powder made of oversea mummies mixed with liquid), blood-sucking leeches, burnt hedgehogs powder, burnt bees, bat powder, snakeskin potion and unicorn horn powder for treatment of their illnesses through out medieval times. 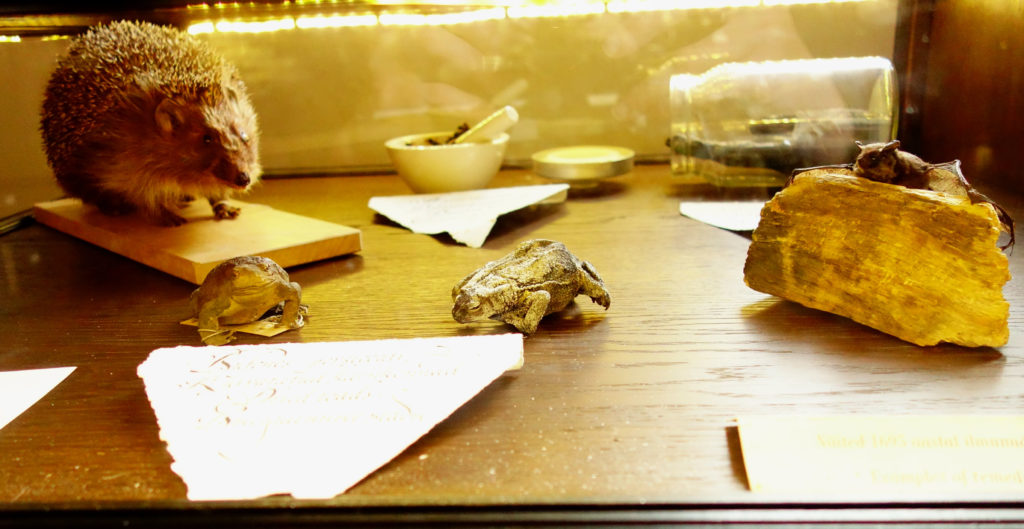 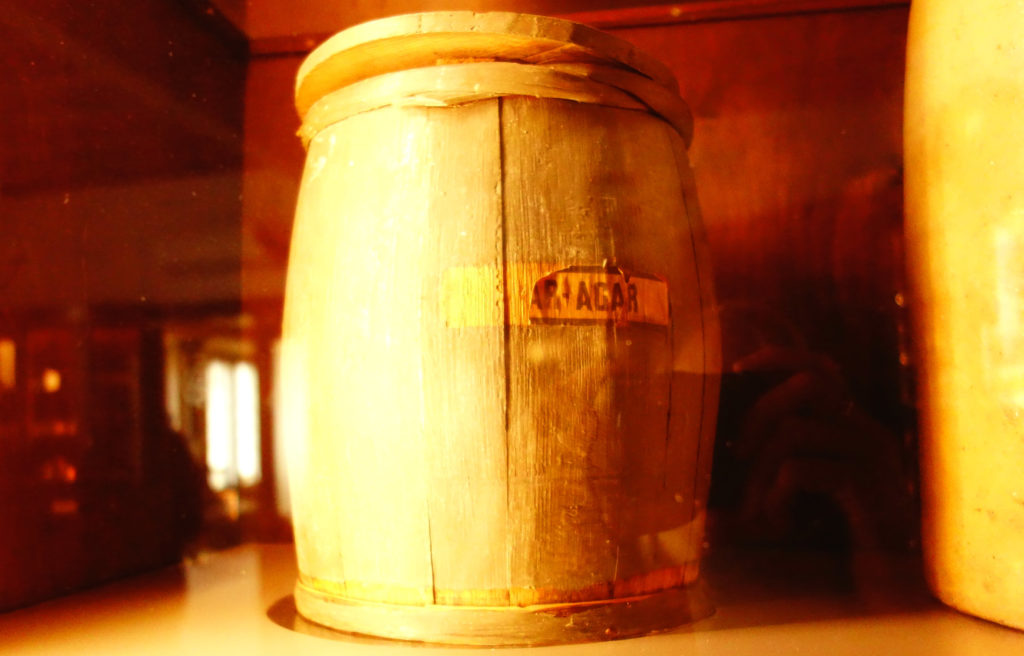 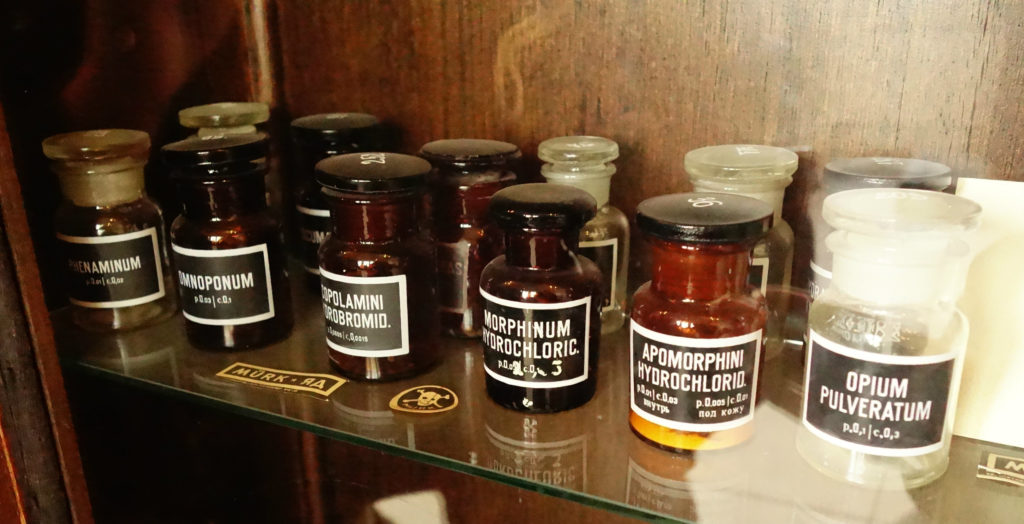 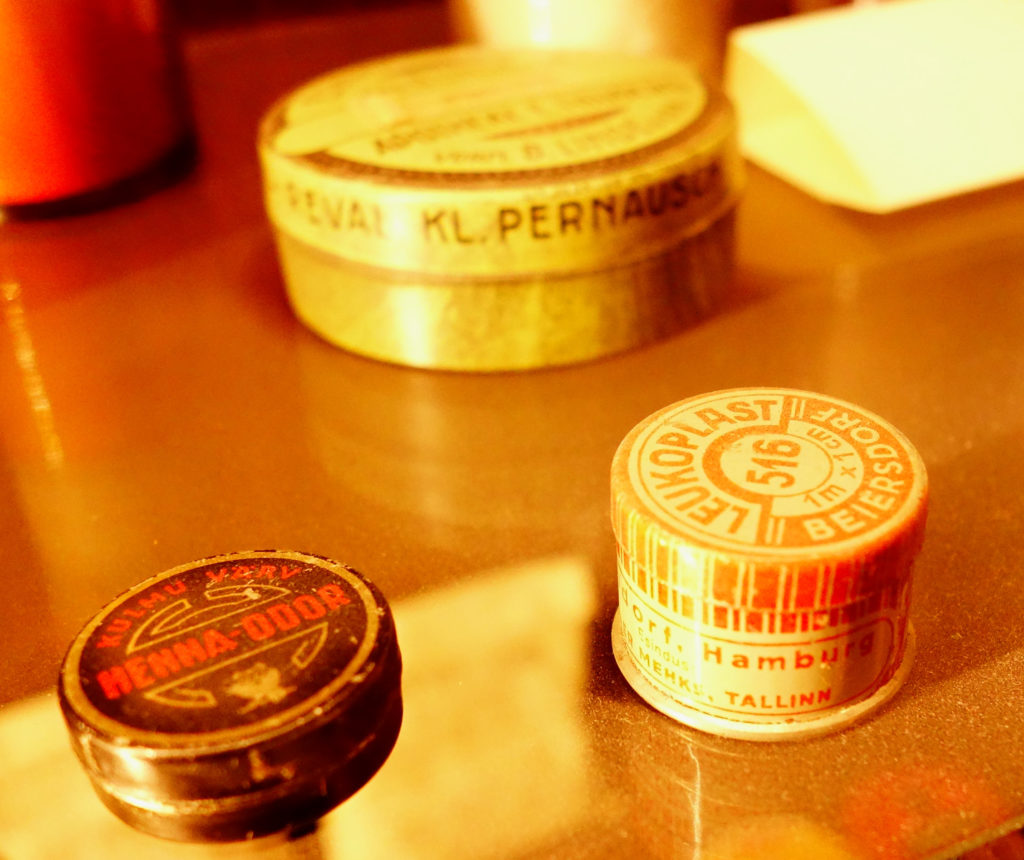 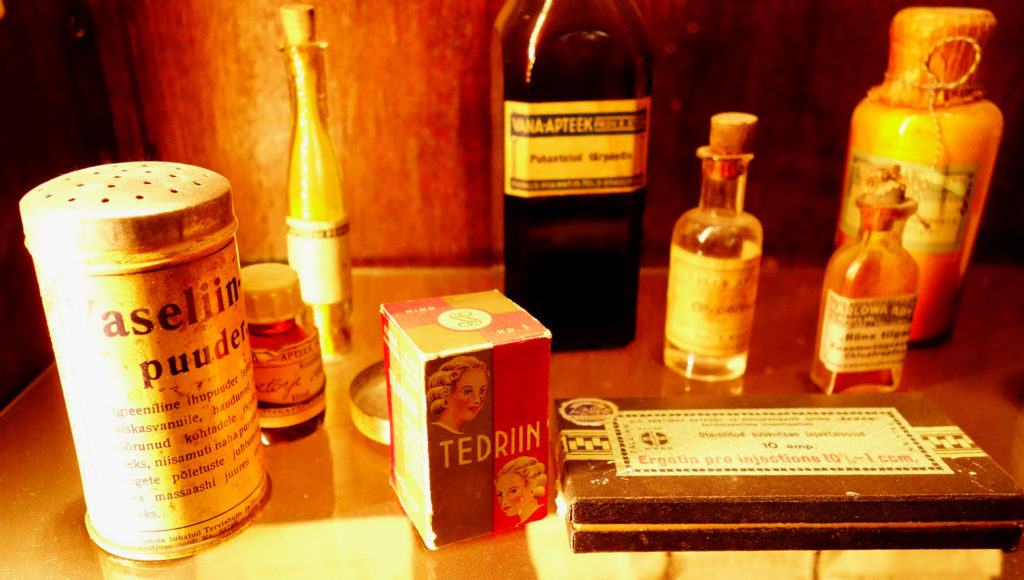 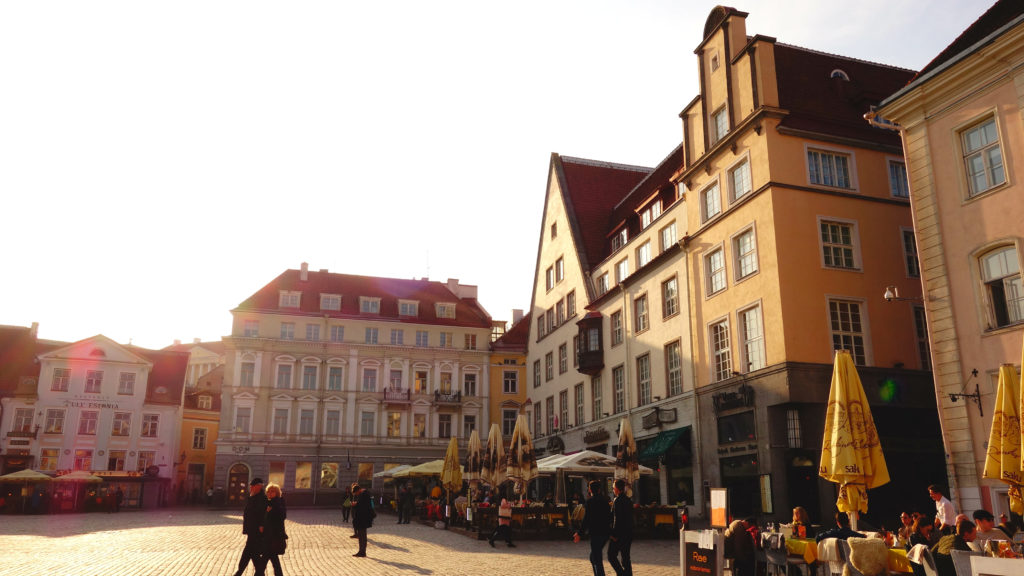 The Raeapteek is conveniently placed right at Town hall Square, where restaurants have their outdoor seating area. Not so much tourists now, which we like. 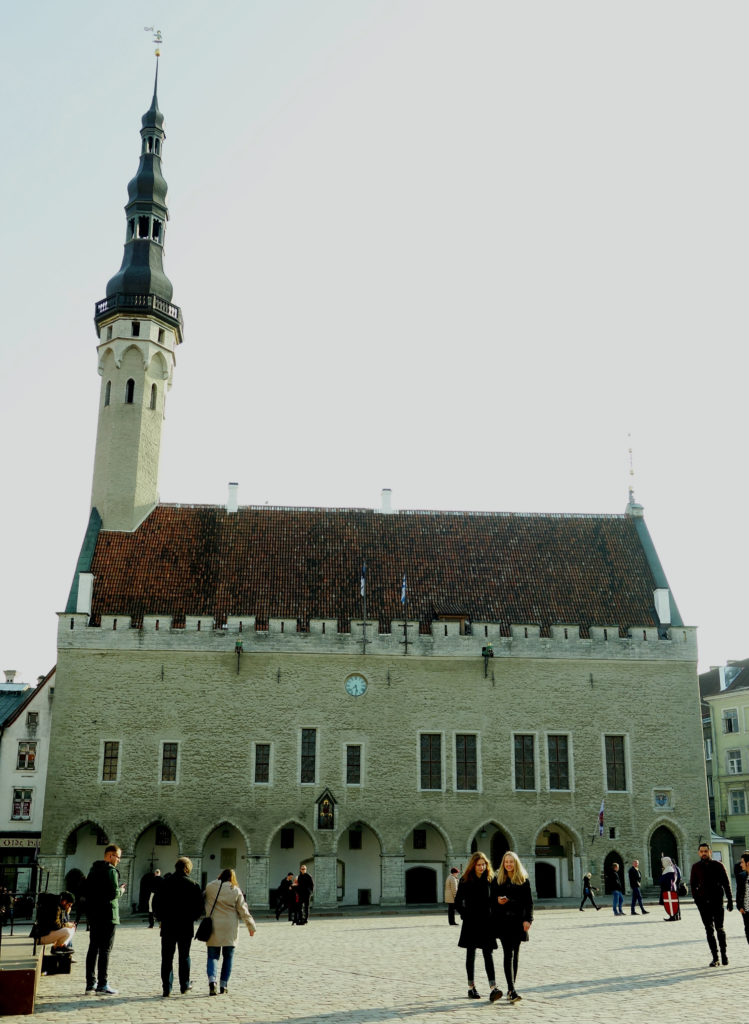 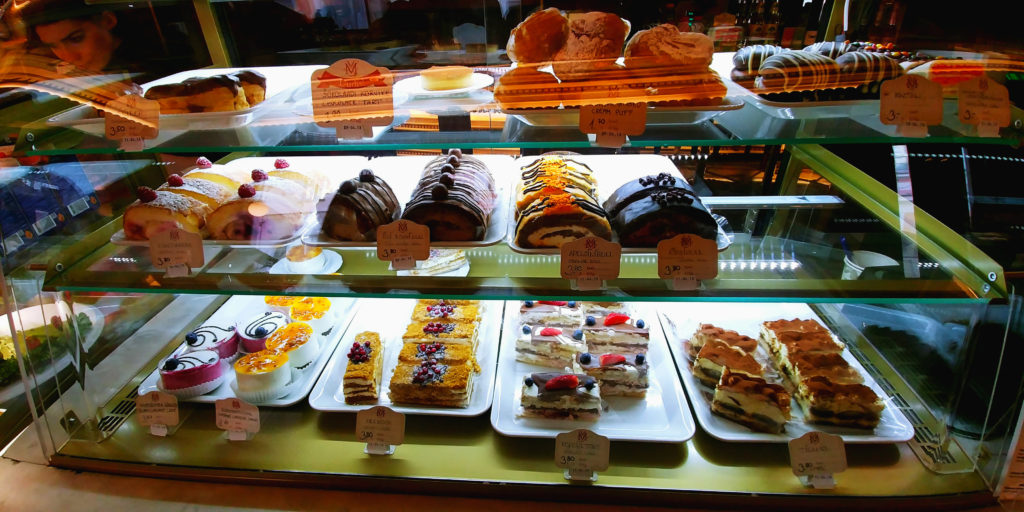 We (or Ulrika) had to rest, so we ended up at Tallinn’s oldest operating café, the Maiasmokk café. 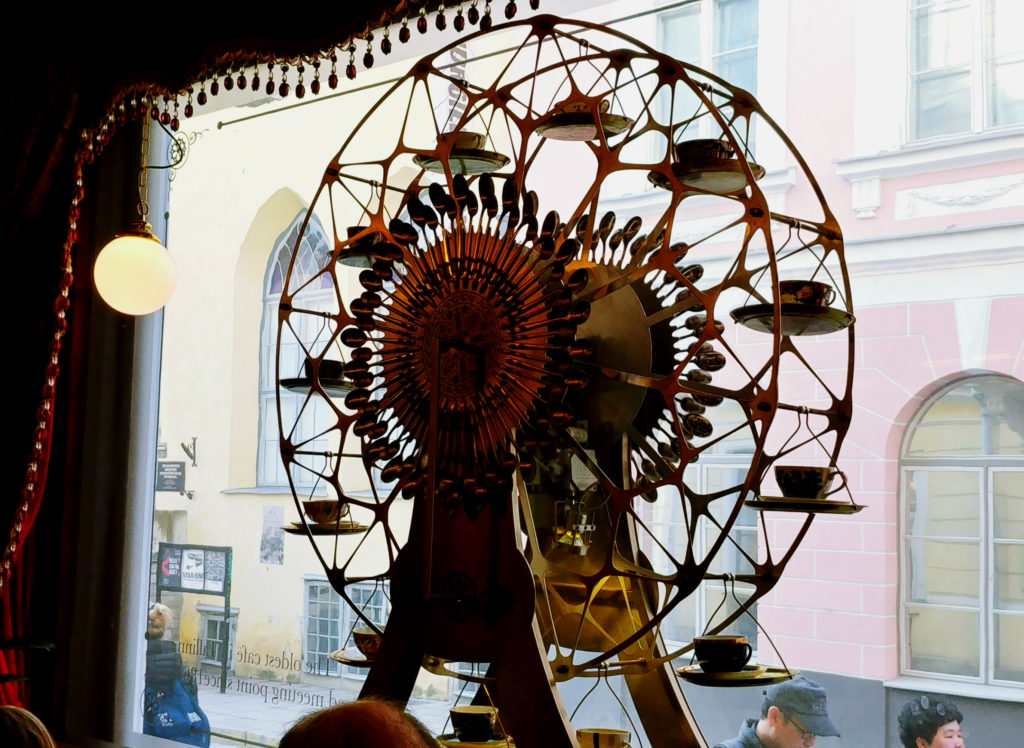 The café has been in the same location since 1864 and the interior has remained unchanged for almost a century. 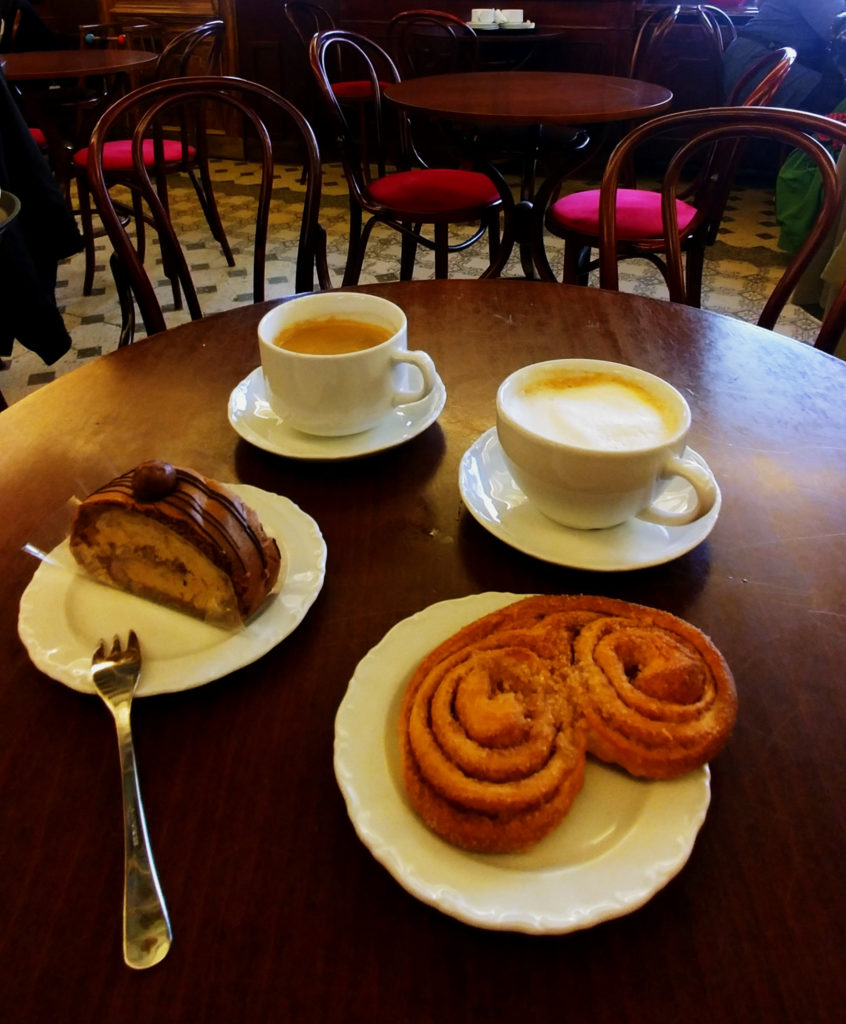 We ended Ulrika’s first day out of the apartment with an estonian cinnamon roll bun and some kind of coffee cake. We were glad that Ulrika now felt better, because we had things to do here in Tallinn.