With Gaudi in Barcelona and friends from Guatemala

Gaudi’s Barcelona was our next stop, and unlike Picasso’s paintings, we really enjoy his imaginative work. We have been to Barcelona before so we first didn’t think of planning to go here, but when it turned out that friends from Guatemala where in town we changed our minds an took the train from Alicante.
We met Anna and Mike in Guatemala two years ago, when we where hiking up to 4000 meters to reach the top of the volcano Acatenango from where you get a great view of the active volcano Fuego, on good days we might add. We weren’t fortunate with the weather that time, but we got two new friends that we now wanted to visit in Barcelona. 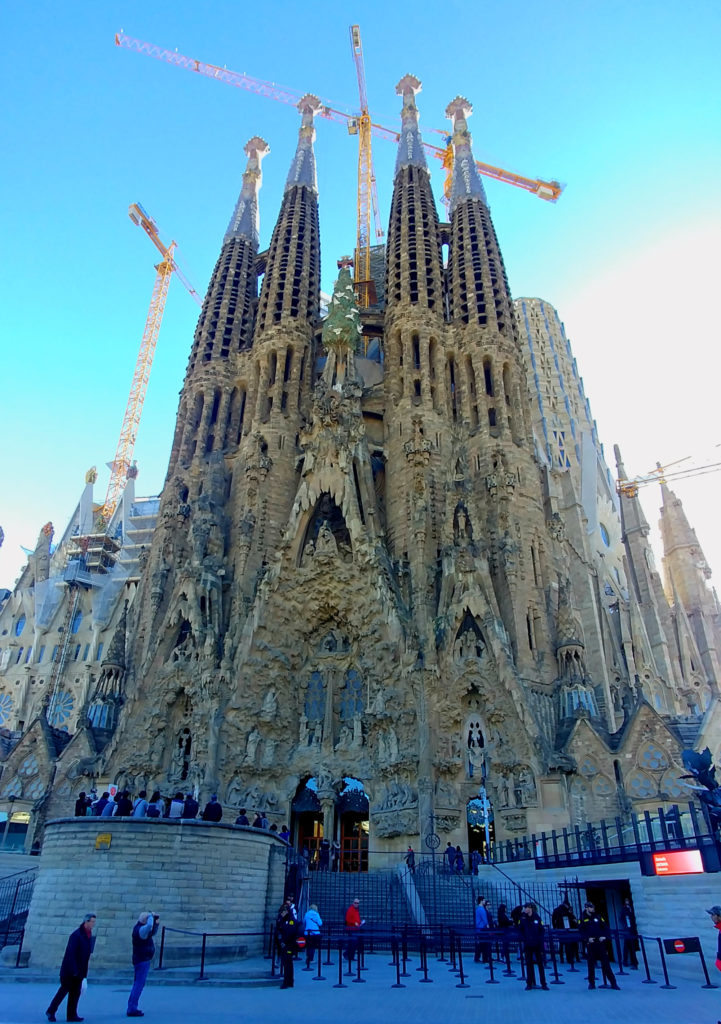 Back in Barcelona, a city we like very much because of the architecture you can find all around the city. Most of the spectacular buildings in Barcelona can be attributed to Antonio Gaudi and his patron Eusebi Güell. 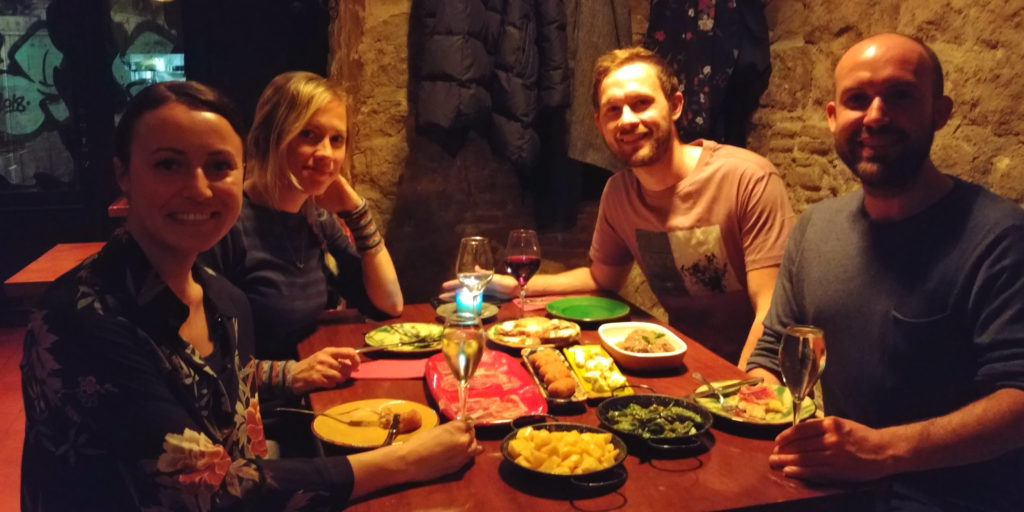 We wanted to go to Barcelona to meet up with Anna and Mike, a South African couple we got to know while hiking up the volcano Acatenango in Guatmeala. They have also traveled the world so it was just by chance Ulrika realized that we were only a train ride away from each other. Two weeks later we were sitting together in a restaurant in Barcelona catching up. It was an awesome evening! 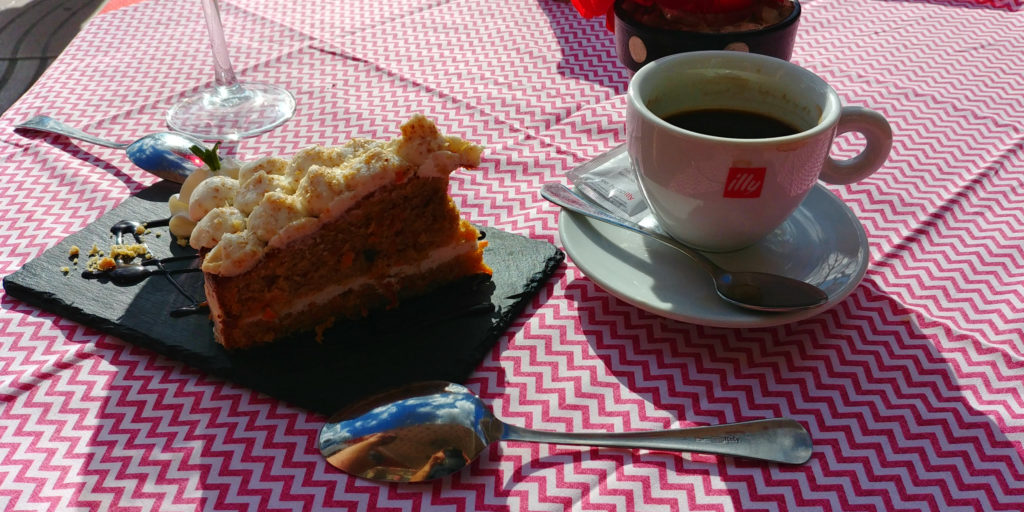 We had only two nights here in Barcelona so we wanted to make the most out of it. Enjoying the sun on Las Ramblas with a carrot cake was one of the things we did. 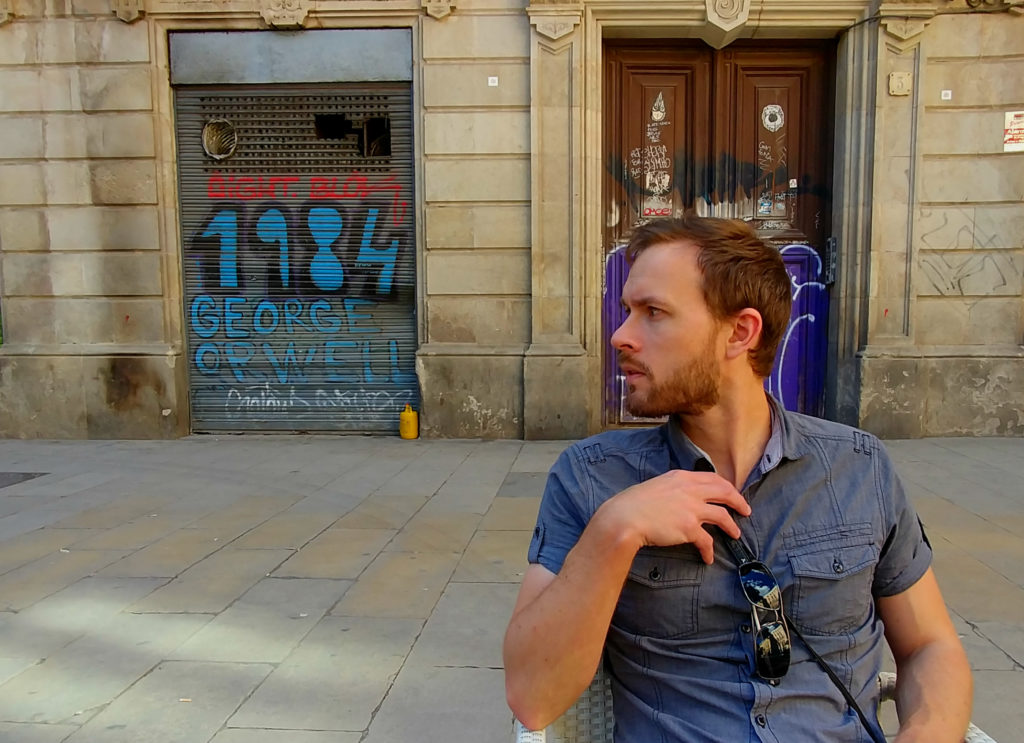 We went to the George Orwell square and had lunch. It felt quite suitable to sit here thinking about where the EU and USA are heading. 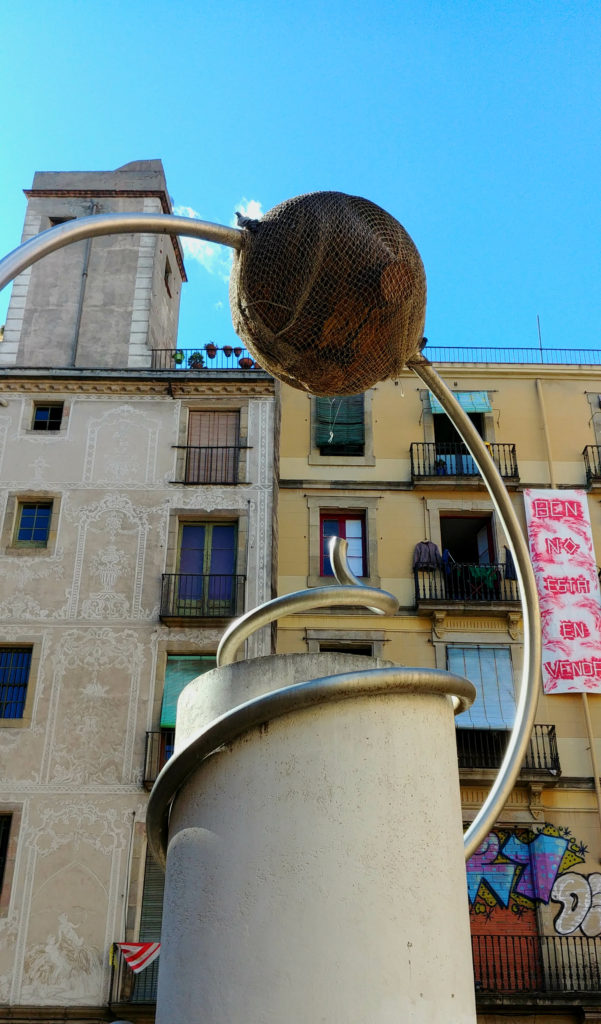 Mass surveillance and the restriction of personal integrity are not only happening in other parts of the world, its happening all around us and you have to keep up and stay protected. 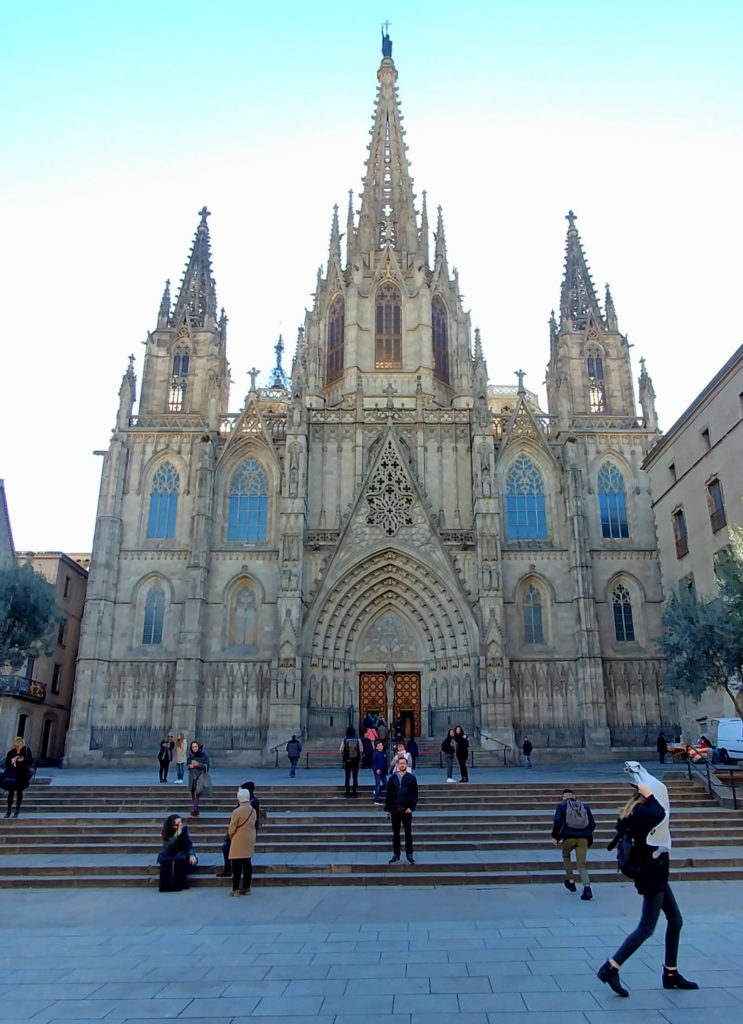 We took a long walk through Barcelona and took photos of incredible architecture, like the Cathedral in Barcelona, a gothic church constructed from the 13th to 15th centuries. 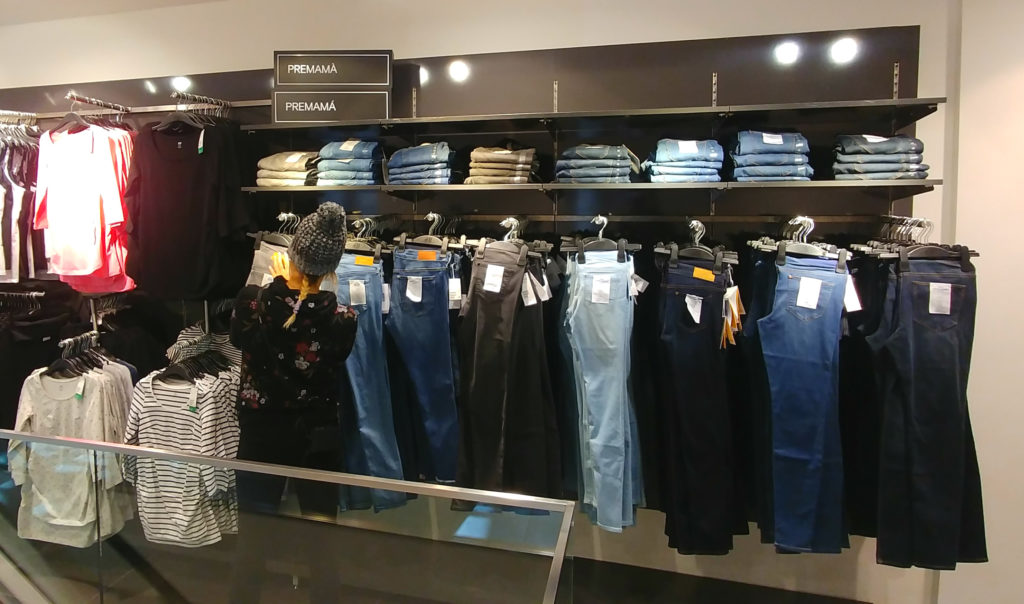 We also did some shopping, because Ulrika’s belly popped out this week. She felt that it was time to buy a pair of maternity jeans. 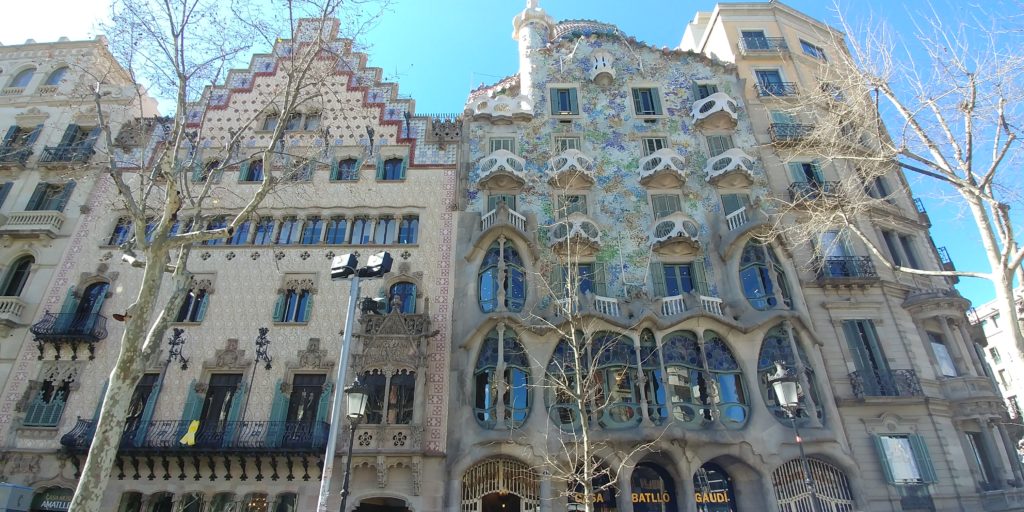 We walked passed Casa Batlló (to the right), a house from 1877 that got a total makeover by Gaudi in 1904. Casa Amatller (to the left), originally a a residence for chocolatier Antoni Amatller was redesigned by Josep Puig i Cadafalch. 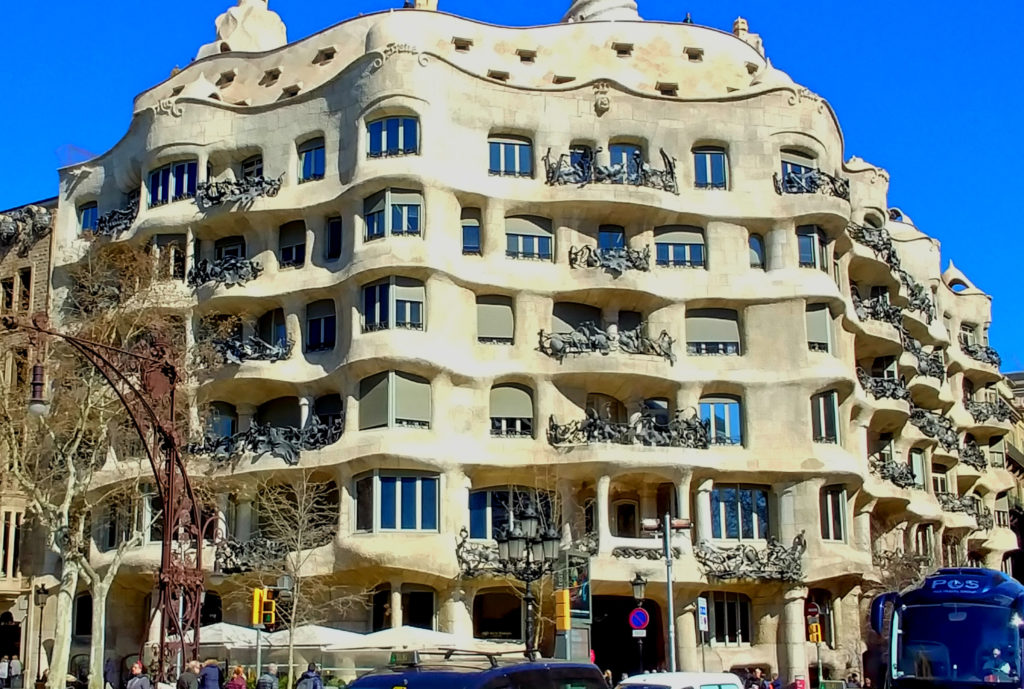 Casa Milà, also known as the stone quarry, was built between 1906 and 1912, and it was the last private residence designed by Gaudi. 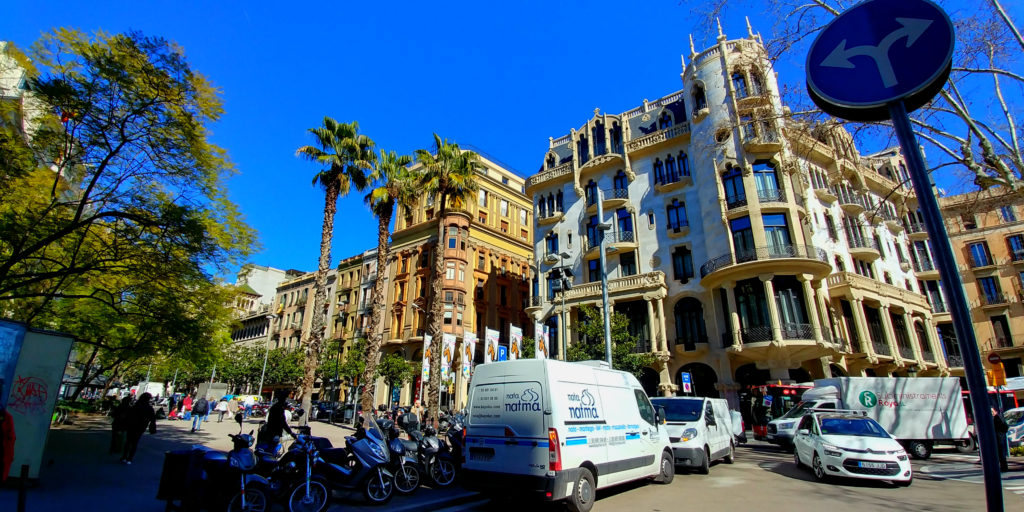 There are a lot more great architecture found in Barcelona, so we like to walk around in this city just looking at builidings. More pictures from Barcelona can be found in the slideshow below. 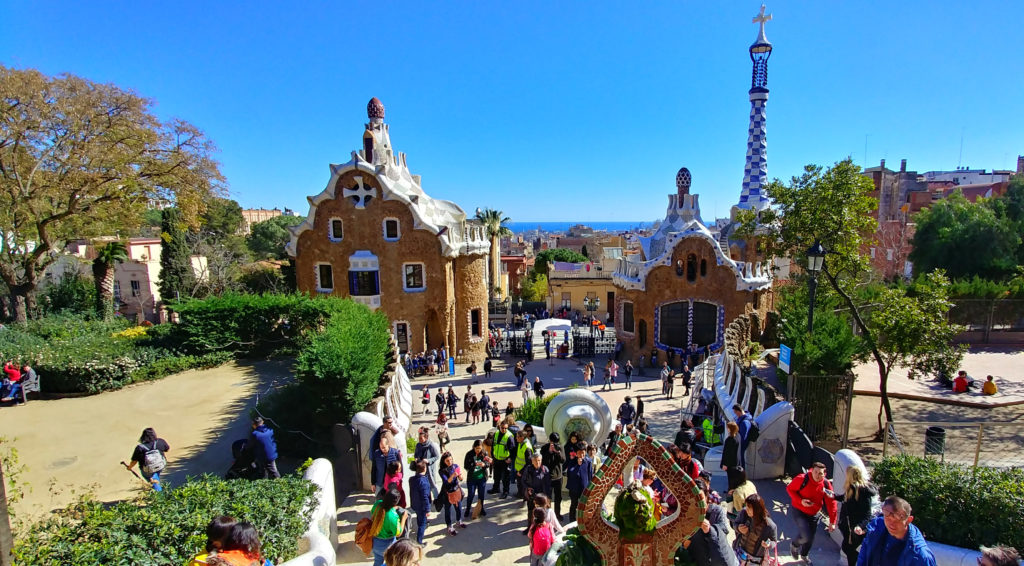 Our mission this day was to see Park Guell and learn more about the relationship between the architect Antonio Gaudi and the entrepreneur Eusebi Güell. 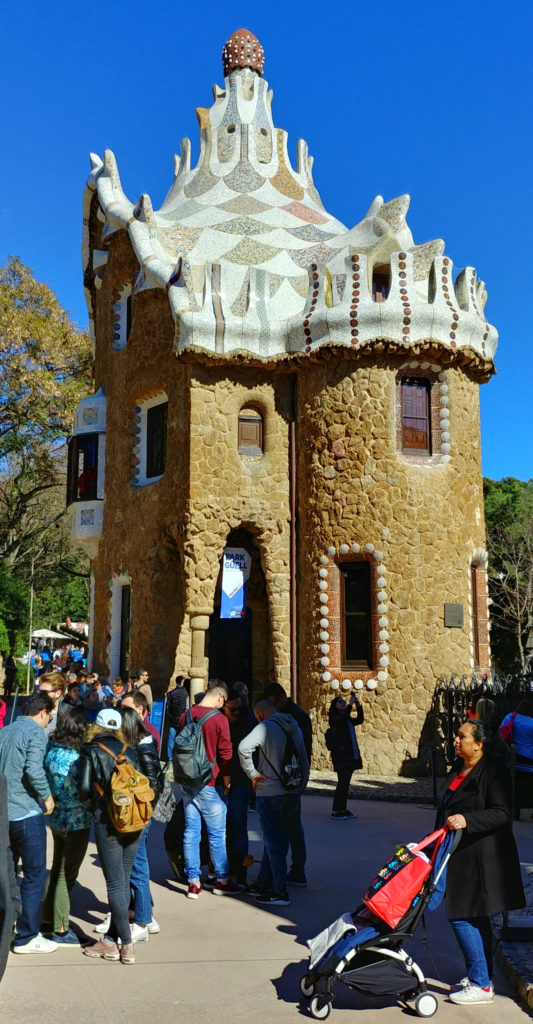 The park houses a small museum where we learned of the important ties that Antonio Gaudi and Eusebi Güell had. Eusebi Güell had profited greatly from the industrial revolution in the late 19th century and it was his respect for Gaudi’s art and his dedication to him that financially could realize all the creative visions that Gaudi had. They met when Gaudi presented his final work for the architecture school he had attended and they worked together to the end. The museum displays pictures from the construction sites in the beginnning of the last century and how Gaudis work progressed, so it was like traveling back in time. We absolutely loved the museum. 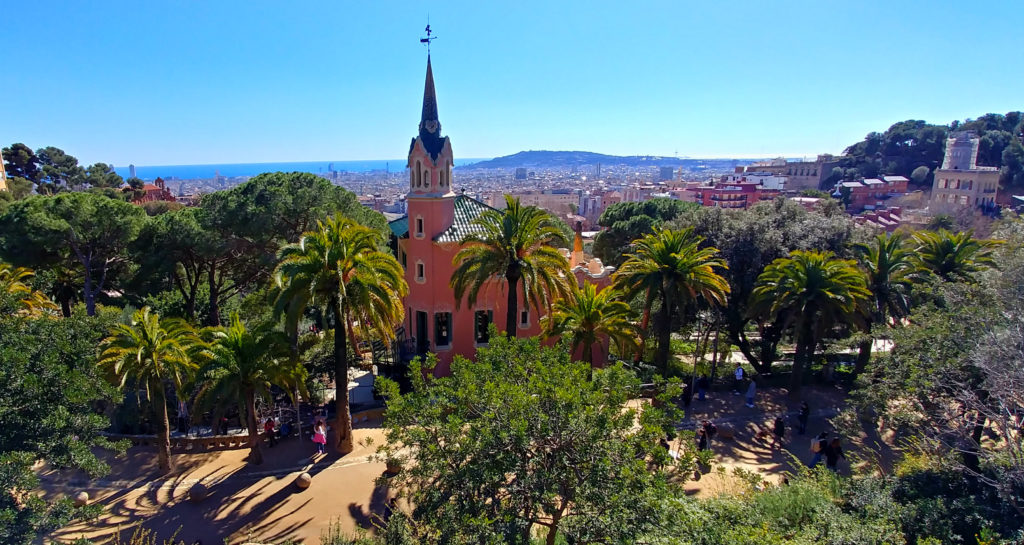 Park Guell was the vision of a private city by Eusebi Güell with a residential park intended for sixty single- family residences. It was Antonio Gaudi who was the architect and responsible for the construction of the park from 1900 to 1914.

The residential park was also meant to be as creative as the buildings. 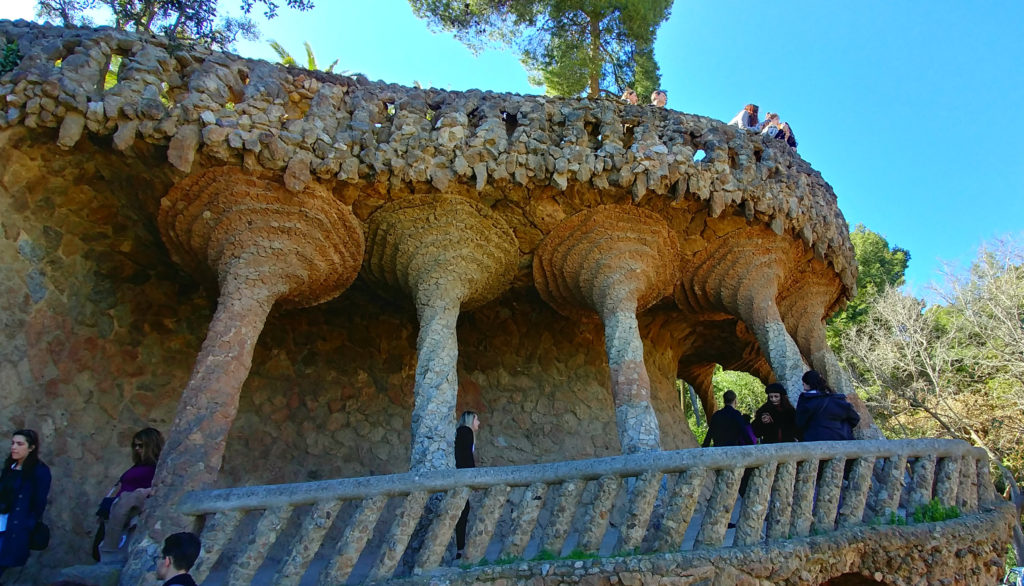 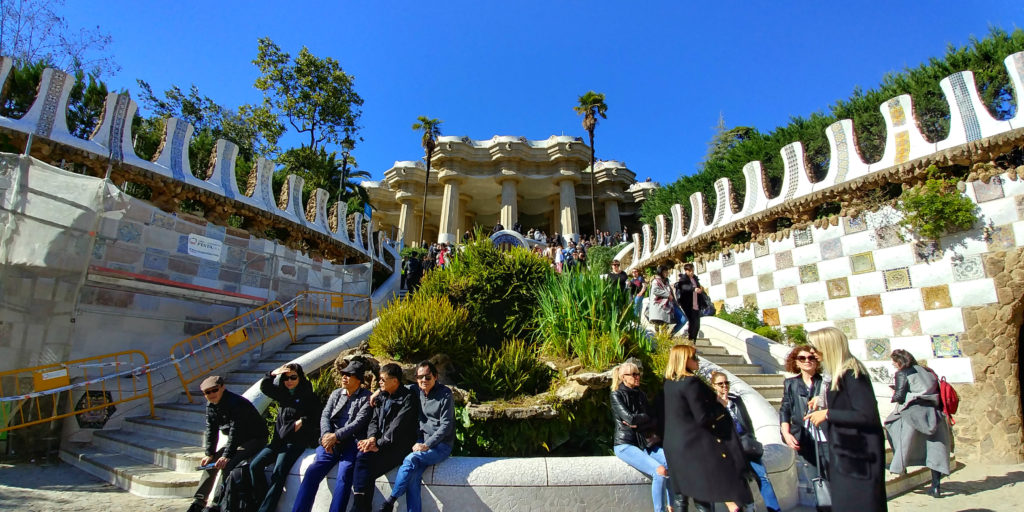 The focal point of the park was suppose to be the main terrace. 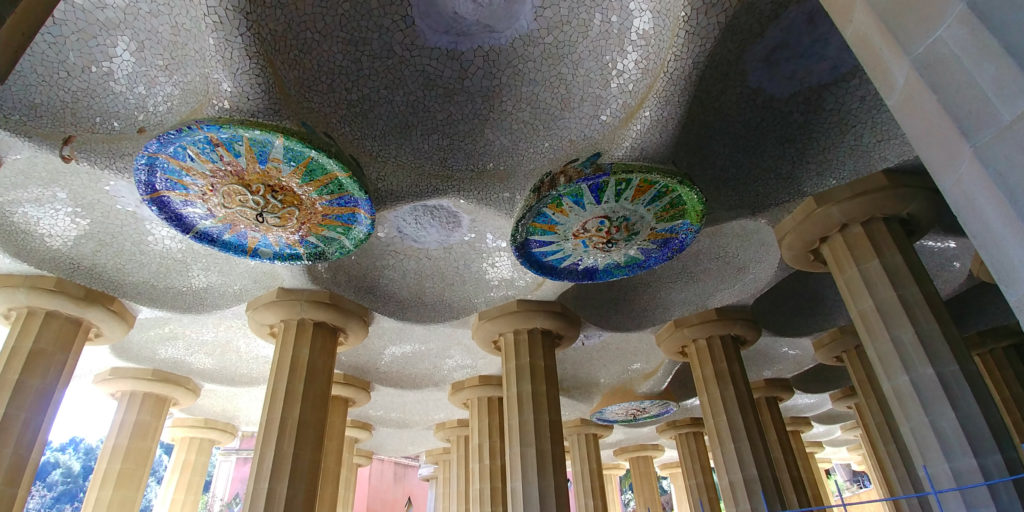 Som pillars holding up the terrace are intentionally missing and replaced by mosaic pictures. 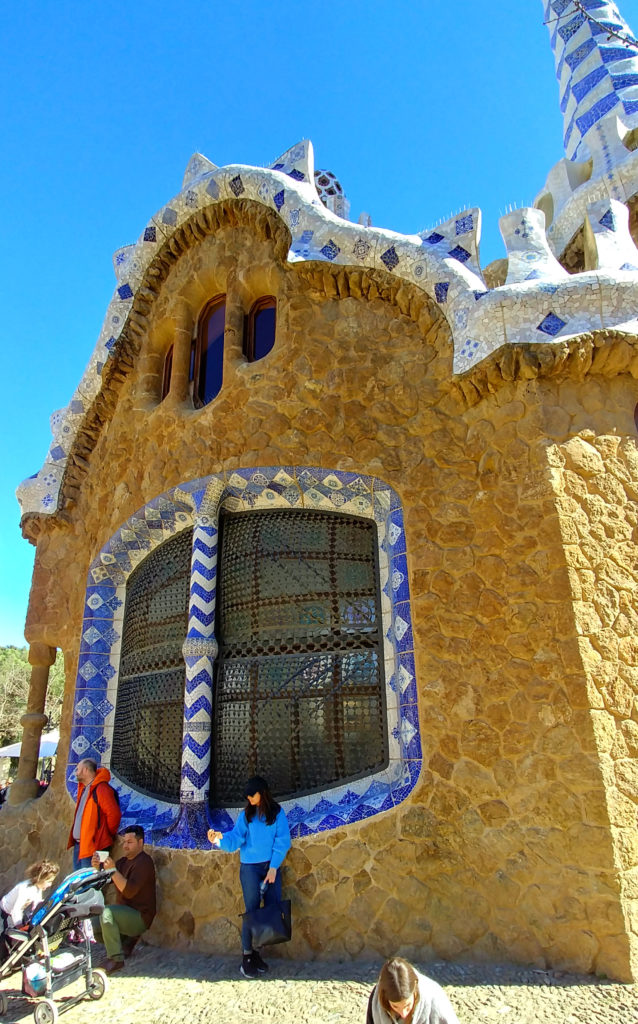 The project was unsuccessful as a business enterprise, with only a handful of the residential houses built.

The only residents who lived here were Gaudi and Güell with his family. 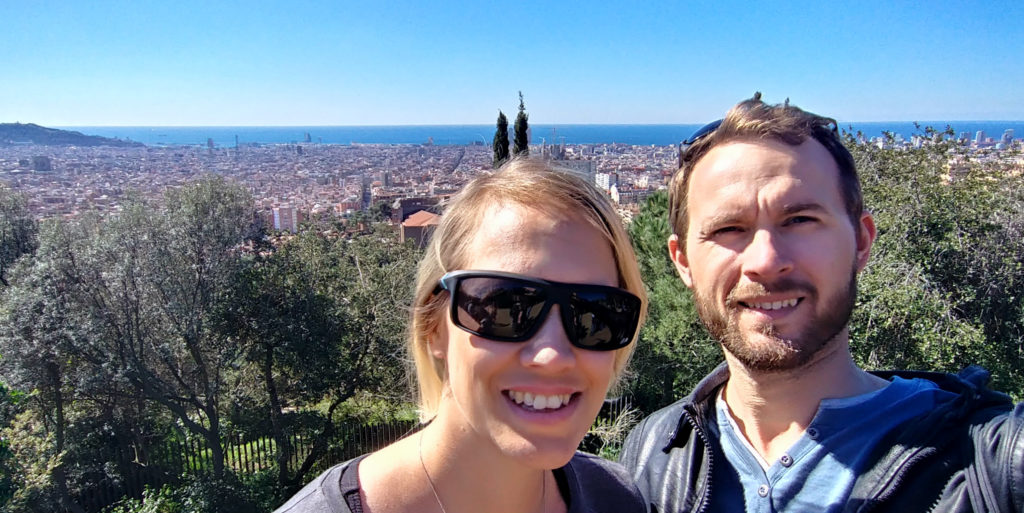 Park Guell is only partly closed for the museum part of the park, which has an entrance fee. The rest of the park is open to stroll around in and you get a good view over Barcelona from here. 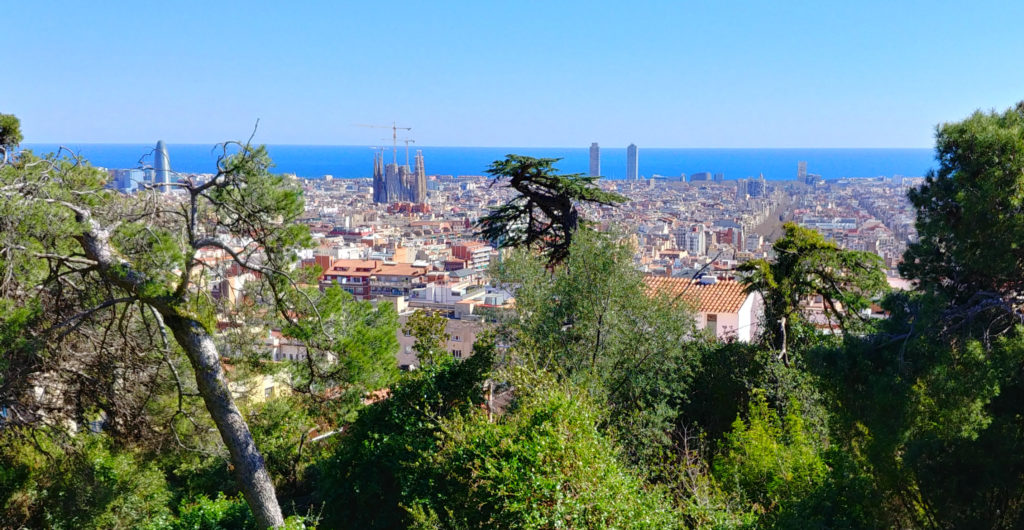 The Sagrada Familia from Park Guell. 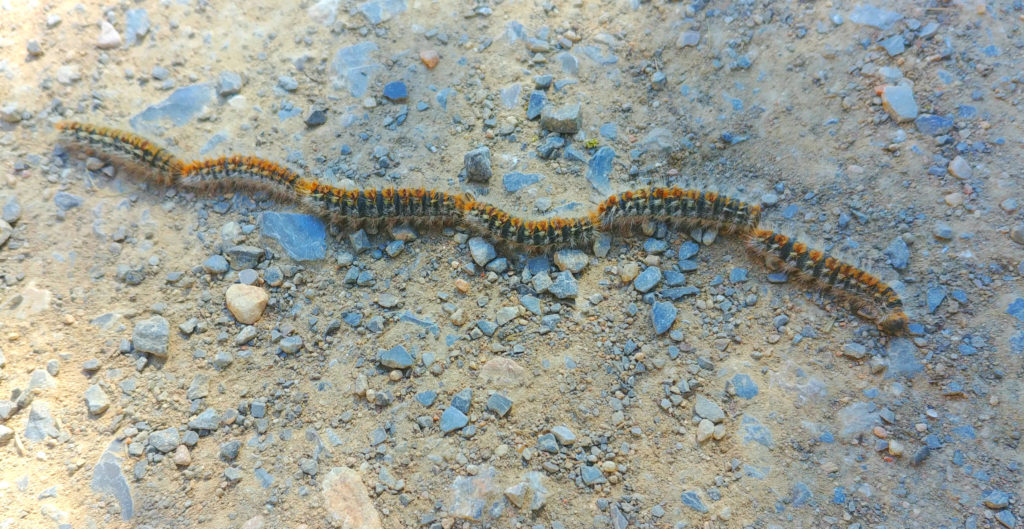 one our way out, we found an interesting formation of nature and immediately thought of a specific unpleasant movie. 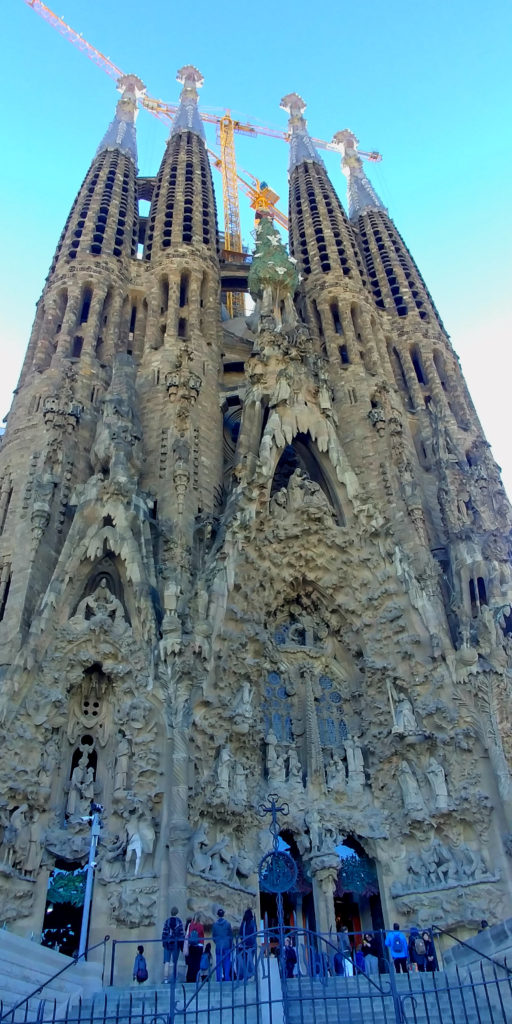 We walked to Sagrada Familia to see how the progress has been since we last were here. We were here in 2011 so we did not enter the church this time around. This is the Nativity Façade, which depict the birth of Jesus and it was constructed between 1894 and 1930. 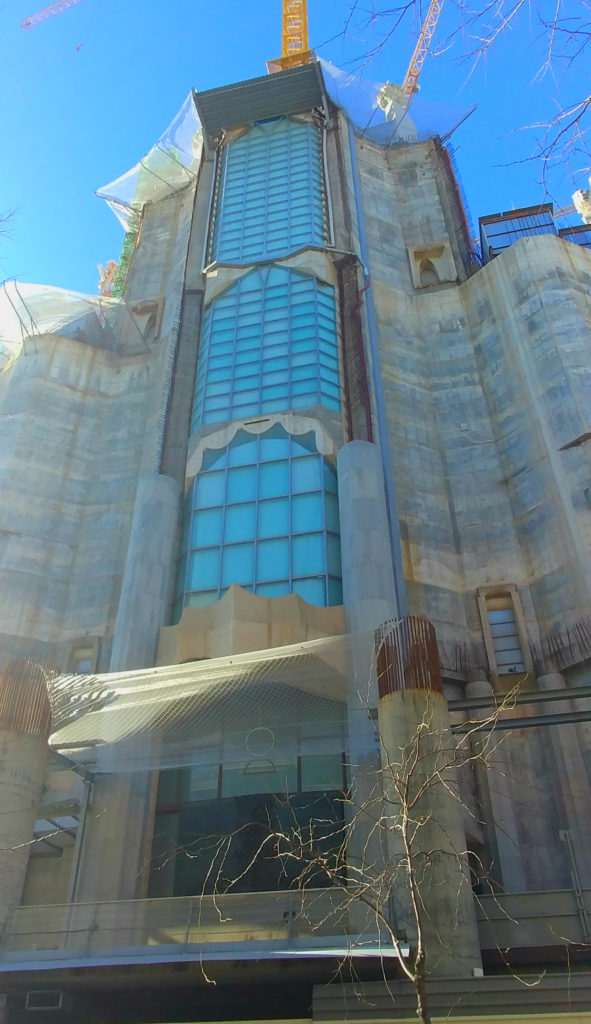 The Glory Façade began construction in 2002 and it was the least finished side of the church when we where here last time and it it still not finished. This Façade is going to be dedicated to the Celestial Glory of Jesus and it represents the road to God: Death, Final Judgment, and Glory. 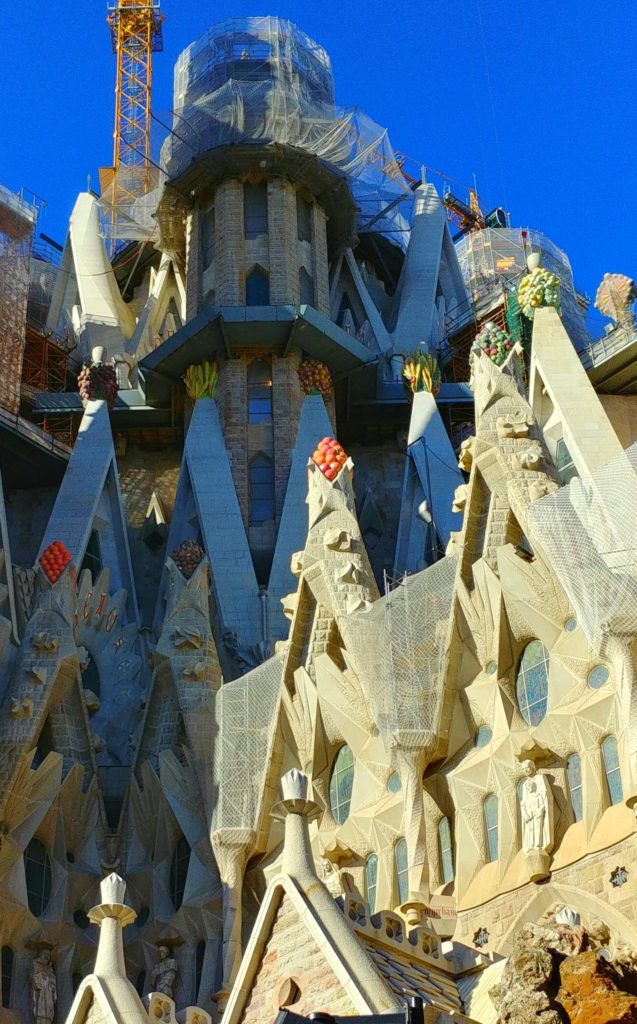 The roof of the Glory Façade is filled with fruits. 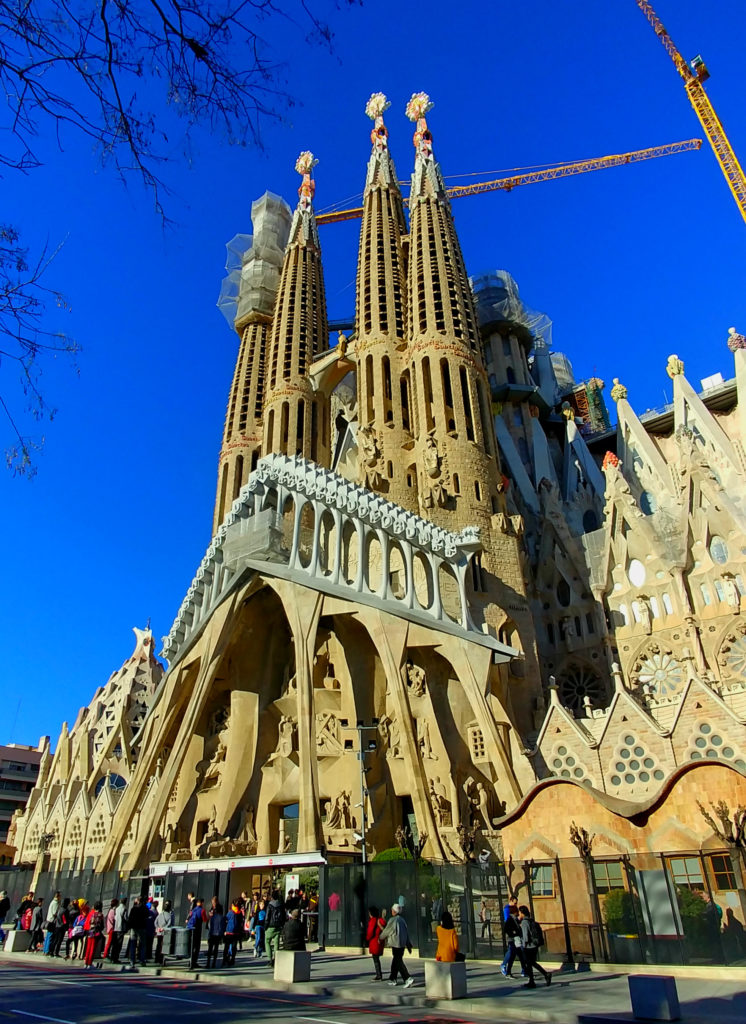 The construction of the Passion Façade in 1954 and it is dedicated to the Passion of Christ and the suffering of Jesus during his crucifixion. 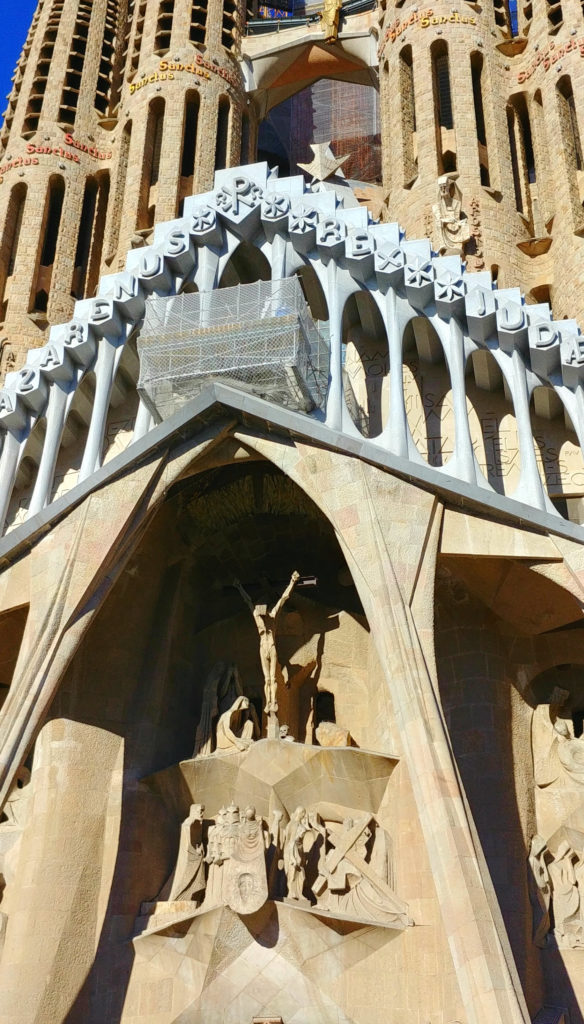 The façade was intended to portray the sins of man and Gaudí wanted to strike fear into whoever was looking at this façade. 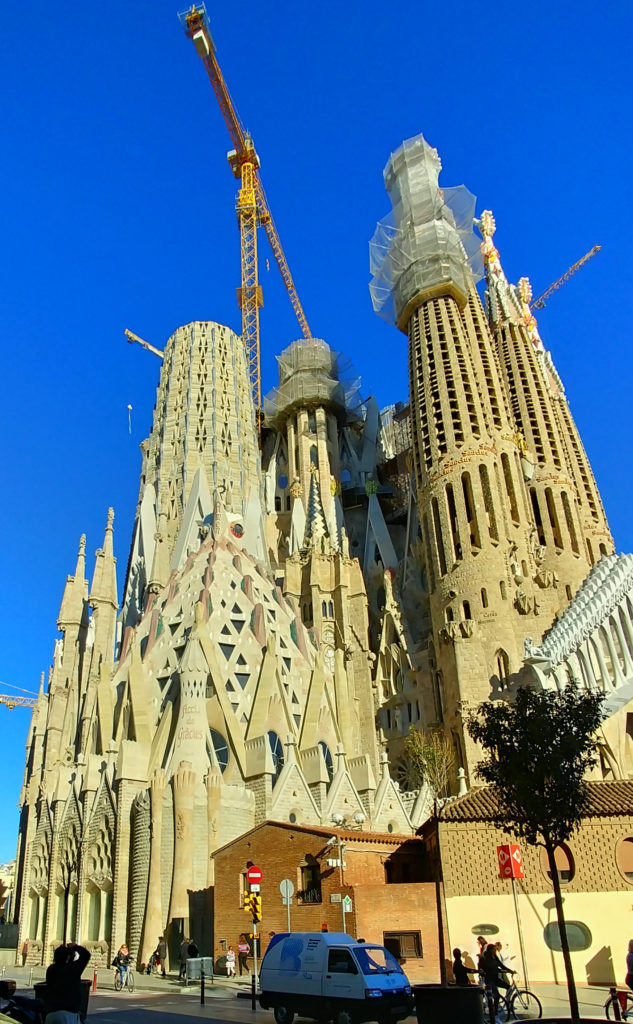 In October 2015, it was announced that construction was 70 percent complete and the construction had entered the final phase of raising six immense towers. Construction began in 1882 and most of the Church are to be completed by 2026 (decorative elements should be complete by 2030 or 2032) – a 150 year old construction project.