Liveaboard – Diving in the Andaman Sea part I

Finally, Ulrika has taken the time to go through all our movies and photos from our Liveaboard adventure in Thailand so this will be a throwback to the end of February when we went out with Sea dragon, a Khao Lak based dive center that  has its own boats traveling up and down the west coast of Thailand taking divers out for adventures in the Andaman Sea. We choose to do a 4 days/4 nights liveaboard going from the Surin Islands down to the Similan Islands with a total of 13 dives during the days (and nights) out on the sea. The crew and dive masters where awesome and the food served was really good, so we had a great time with the Sea dragons that we will remember forever. 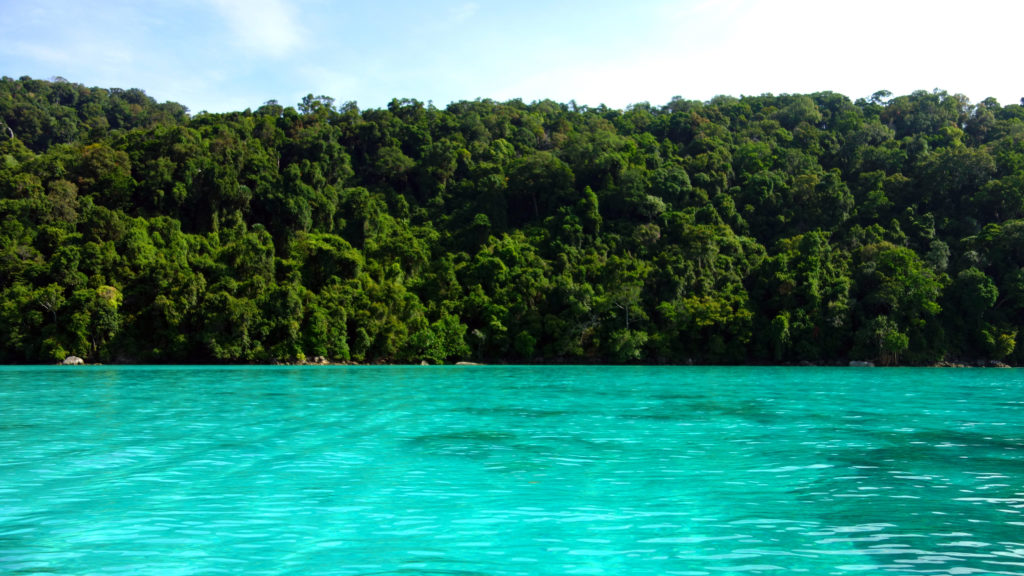 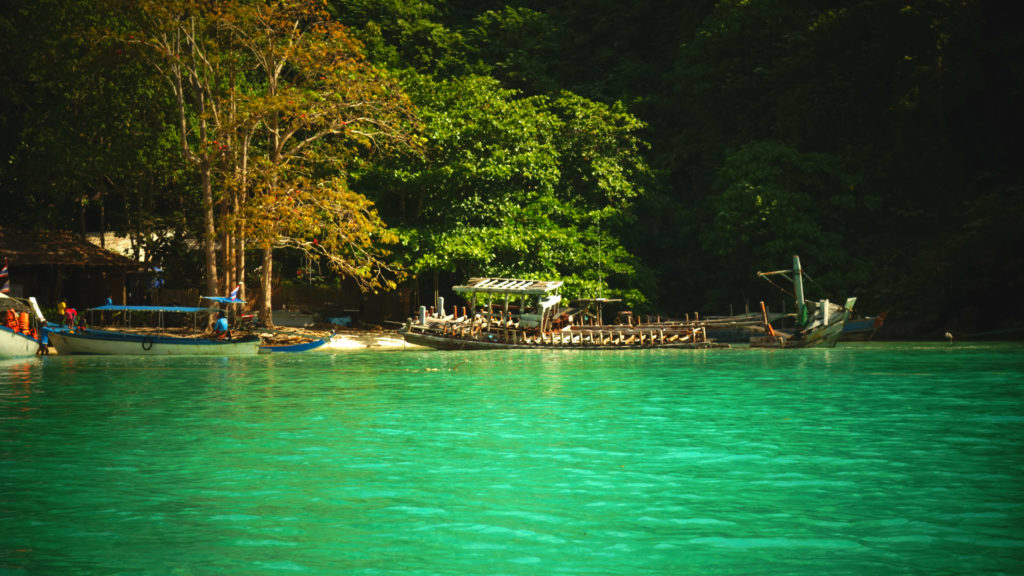 Mu Ko Surin National Park is an archipelago of five islands 60 km from the mainland and only a few kilometers from the Thai-Burmese oceanic border. The ethnic Moken minority, known as “chao lay” or “sea gypsies”, are the only humans living on the Surin islands. 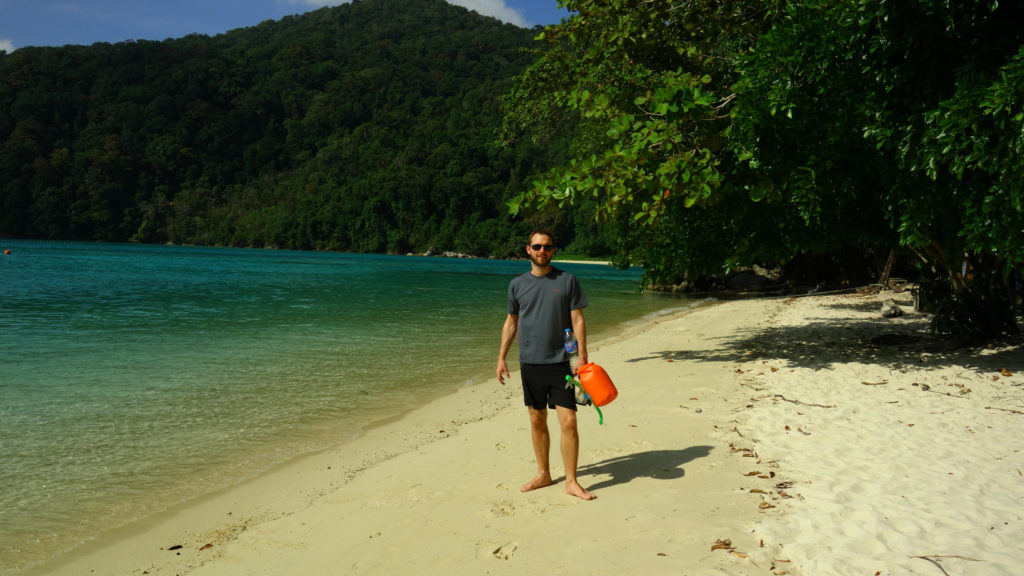 We got a chance to walk on the main Surin Island and explore a small part of the national park. The park is closed during rainy season, 1 May-31 October, so during that time no dive boats go to this part of Thailand. 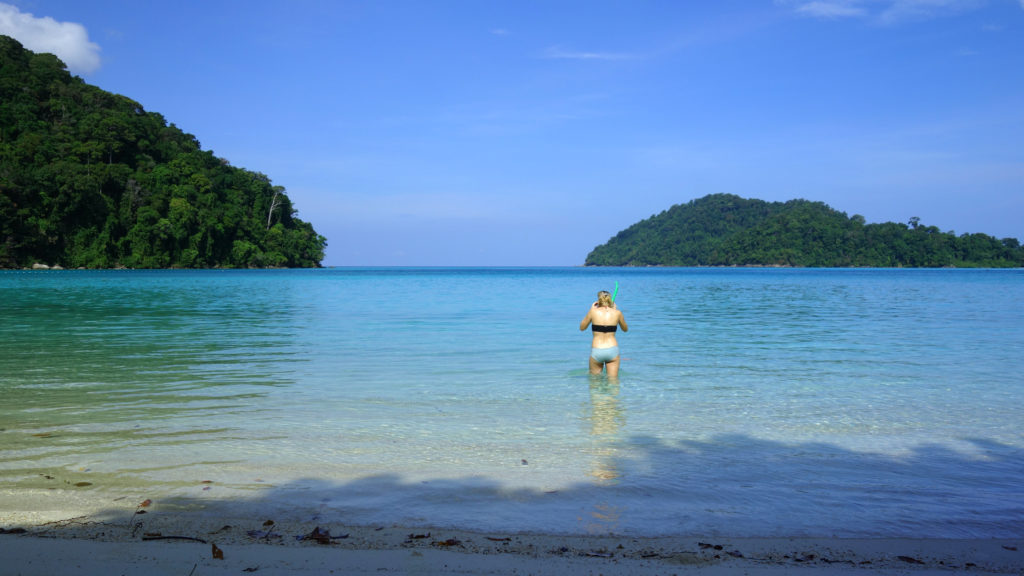 We brought our masks so we could do some snorkeling, but there wasn’t much to see under the water here. It was more things to see looking out from the beach. We then went out on our second dive before lunch.

We went out with the M/V Andaman boat and it was our Liveaboard-home for a few days. So we could relax on the sun deck reading a book or lay down under the roof listening to a podcast between dives. We have put together a slide show with pictures of the boat if you want to see how a Liveaboard boat could look like. 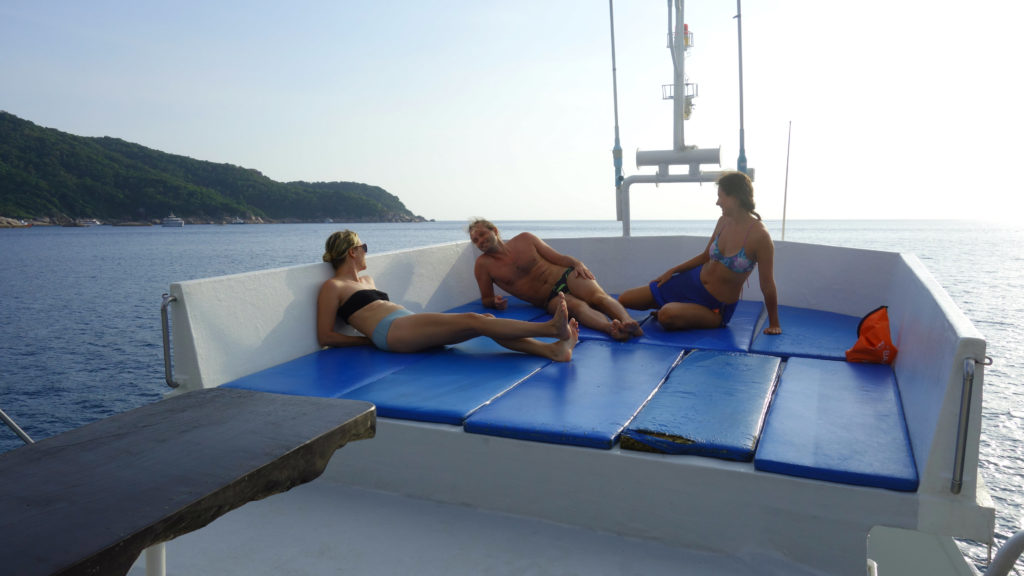 We could also talk with the other Liveaboard people on the boat. Siim and Kajsa were our dive companions, sharing the same dive master, so we did all of our dives together. Siim and Kajsa are working in the Finnish/Estonian film industry and Siim had become a bit famous after his last movie ( Mother, 2016) so some Estonian people on vacation in Thailand had recognized him. 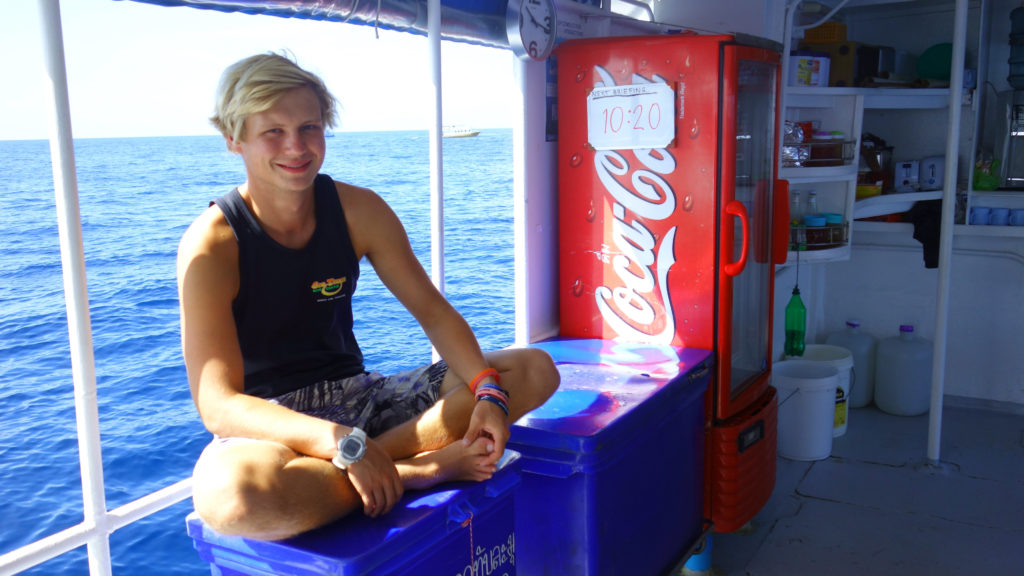 Emil was our Swedish dive master who took us out on the under water adventures! Thanks Emil for our days with the Sea Dragon Liveaboard, you made it an awesome time for us.

It was encouraging to see the number of dives the people on our boat had done. We were one of the least experienced with only 48 dives during this trip, some of the divers had done several thousands of dives up to this point. 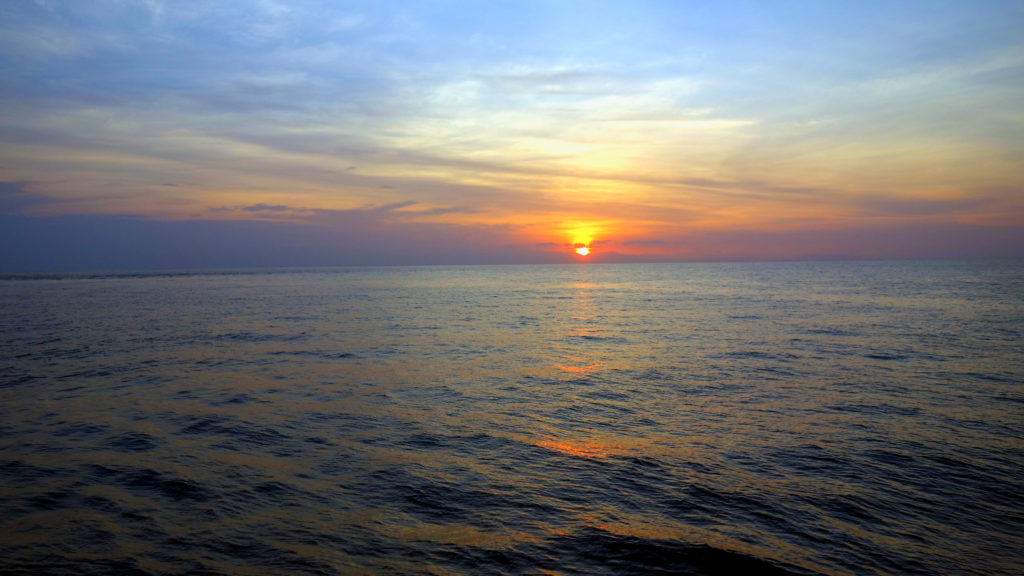 Our fourth dive was a night dive around the Surin Islands, so we waited for the sun to set before we jumped into the water. We didn’t film during this dive, but it was a really nice dive. 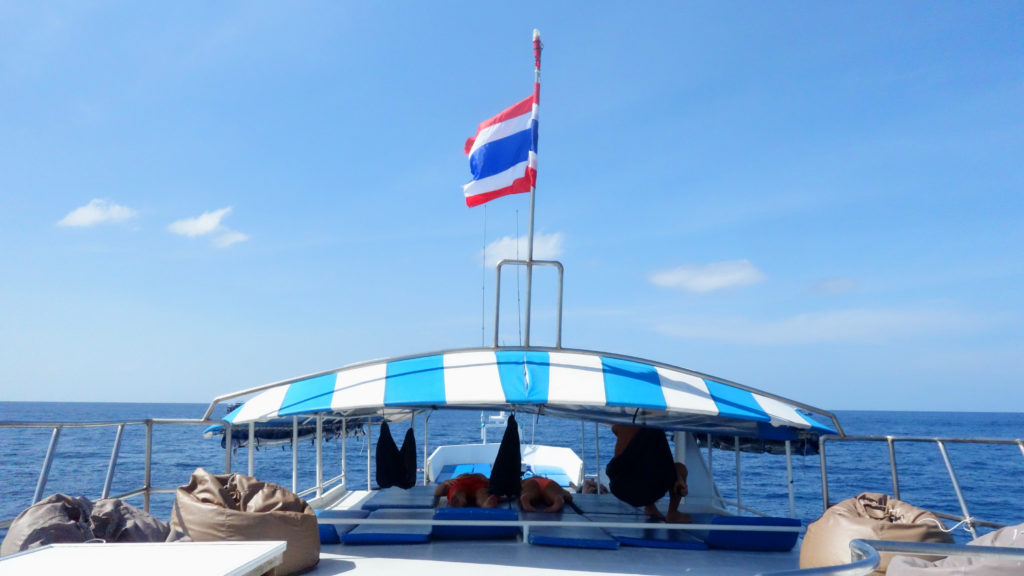 On dive day 2, the M/V Andaman took us to Richelieu Rock, a famous dive site 18 km east of the Surin Islands. Richelieu Rock is known for its purple corals and the diverse marine life found there. You even have a chance of seeing whale sharks around this underwater rock mountain if you’re lucky (we weren’t that lucky). 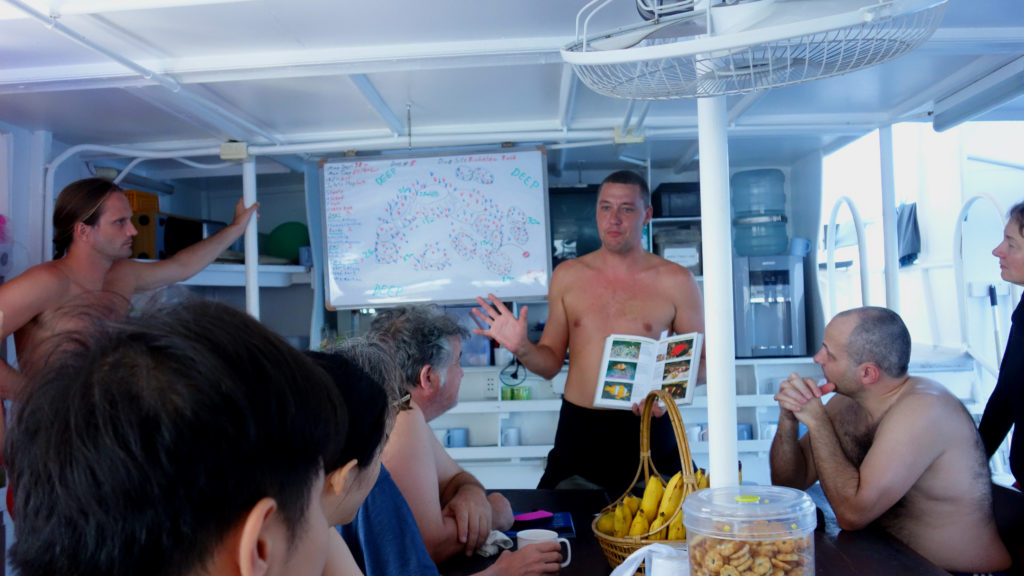 The dive master, there were five of them taking care of different dive groups, held a dive briefing before each dive and told us what we could expect to see on different dive sites. We did our dives no 5 and 6 around this dive site. The coral is pink and purple, so Scorpion fishes here have amazing color pattern trying to disguise themselves among the corals. 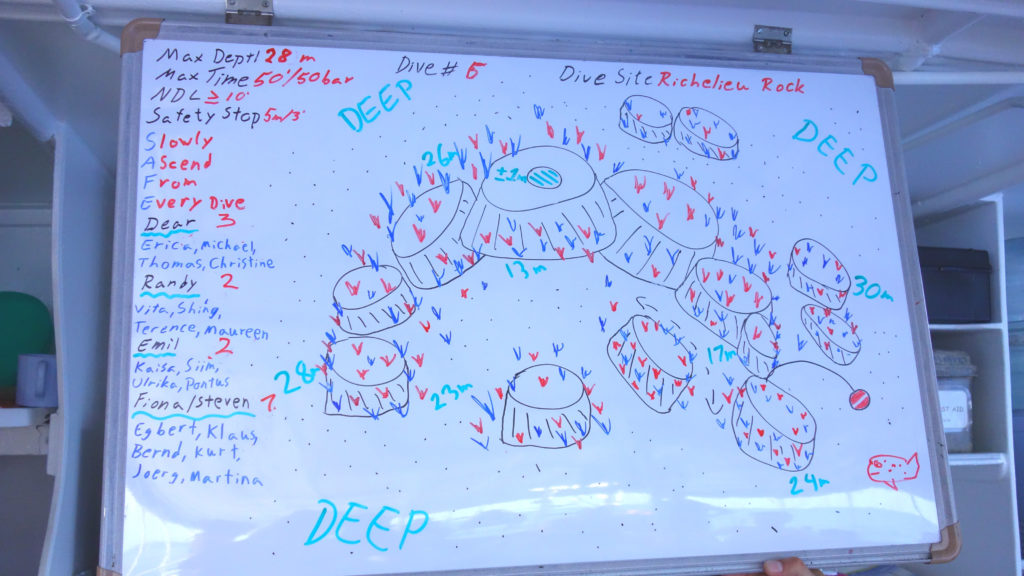 Richelieu Rock became a dive site when diving pioneer, Jacques-Yves Cousteau, with the help of local fishermen, discovered it. It is a horse-shoe shaped pinnacle that rises 50 meter from the sea bottom and touches the surface during low tide. After our two dives at Richelieu rock, we had lunch on the boat while it took us  south to the island Koh Tachai. More about that in part II.