Bayern is not boring at all

When we last left you, we just arrived to Bayern (Bavaria) to get a few days of rest after our adventures in Austria. We haven’t felt any urge of going here and, quite frankly, we have always imagined that this place would be boring. How wrong we were, Bayern is colorful, clean, friendly and there are lots of interesting places, especially in the region capital Munich. We were just here for a transit before visiting our friend outside of Nuremberg, so we have to go back here some day and explore this region more. However, we did make use of the time we spent in both Weilheim in Obernbayer and Munich. 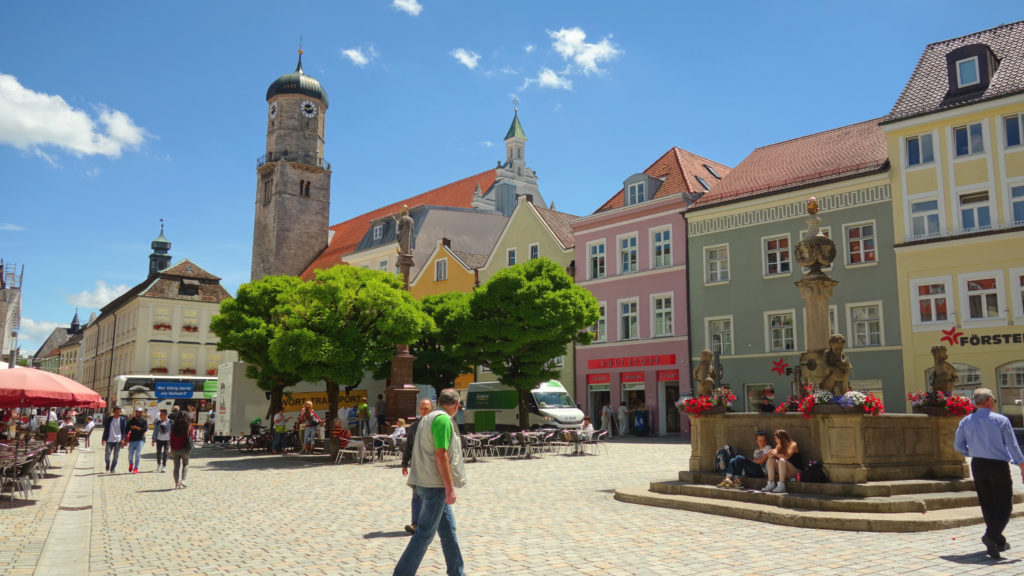 Weilheim in Oberbayern, a small town between Munich and Garmisch-Partenkirchen in Bayern. 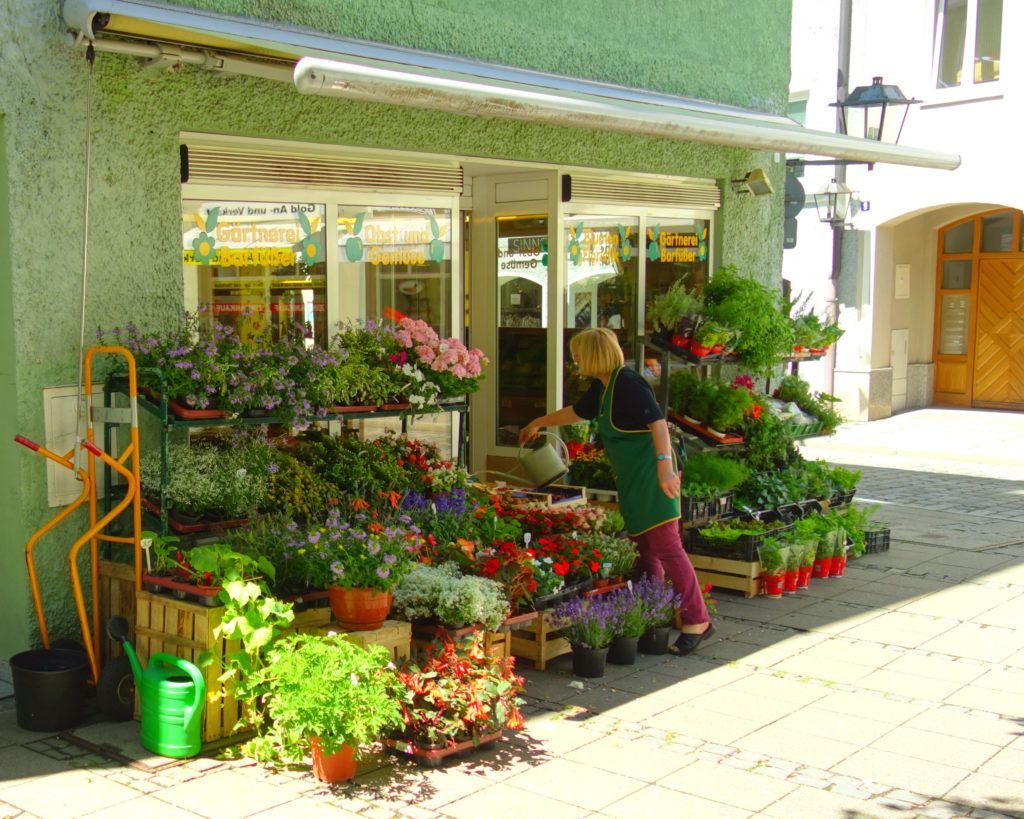 It was perfect for us to make a stop and rest after a week exploring the alps – climbing, hiking and mountain-biking. 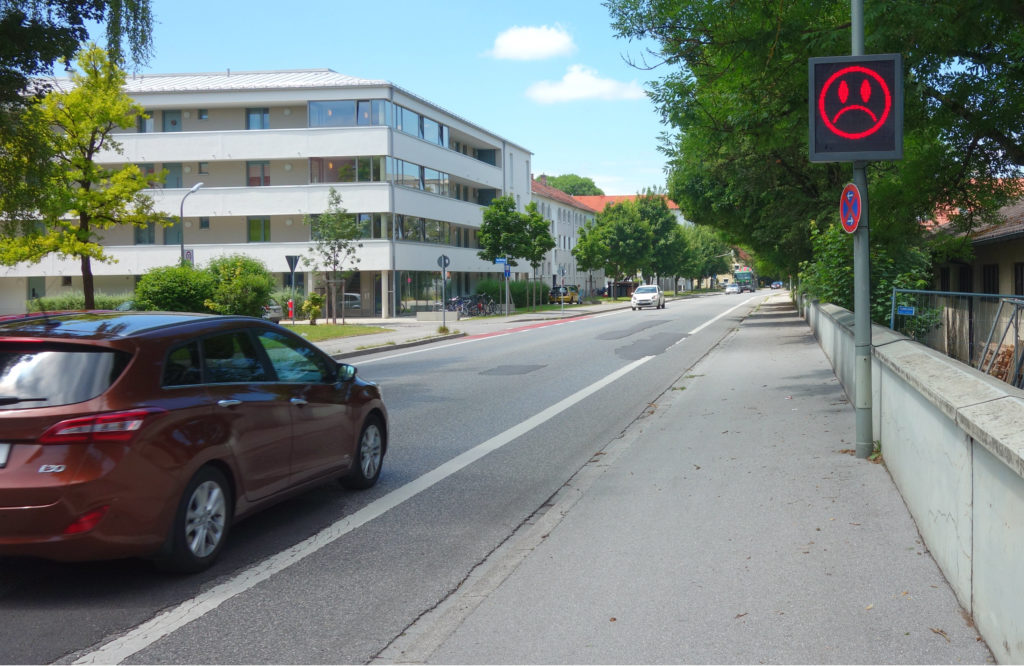 Weilheim in Oberbayern is a place where sad faces show up if you are speeding. Thanks to the car who saw us waiting to take a picture and increased its speed just so we could get a sad emoji on photo! The car immediately slowed down after the sign, so thank you 🙂 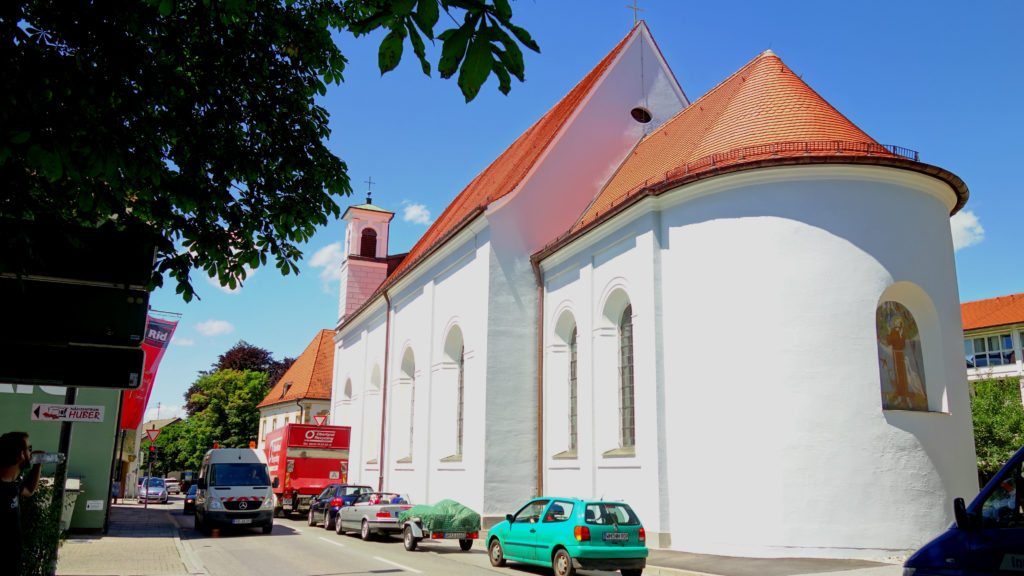 We just relaxed here and tried out new settings on our camera. 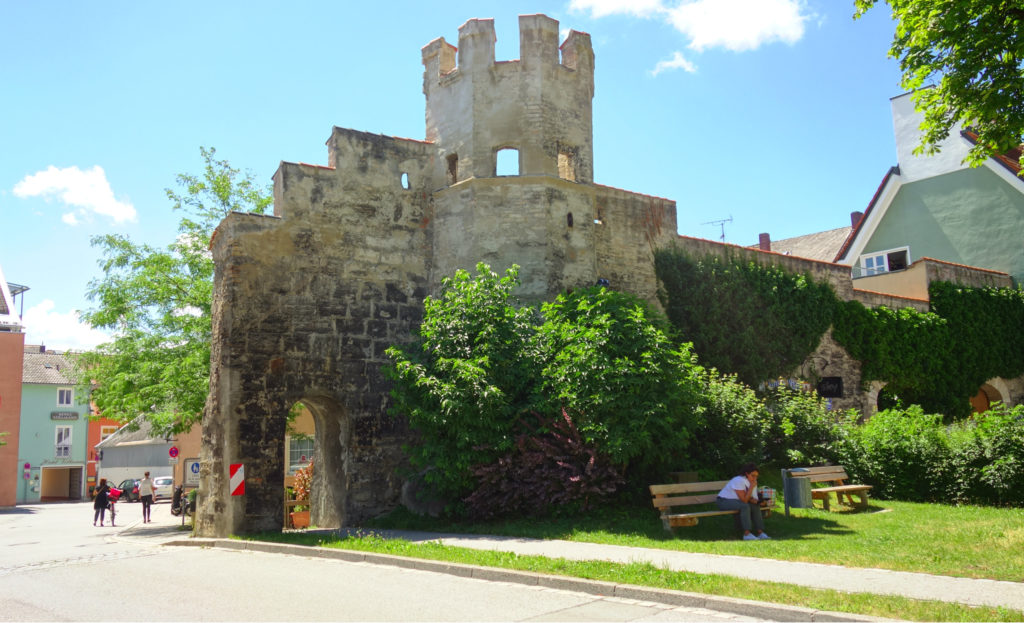 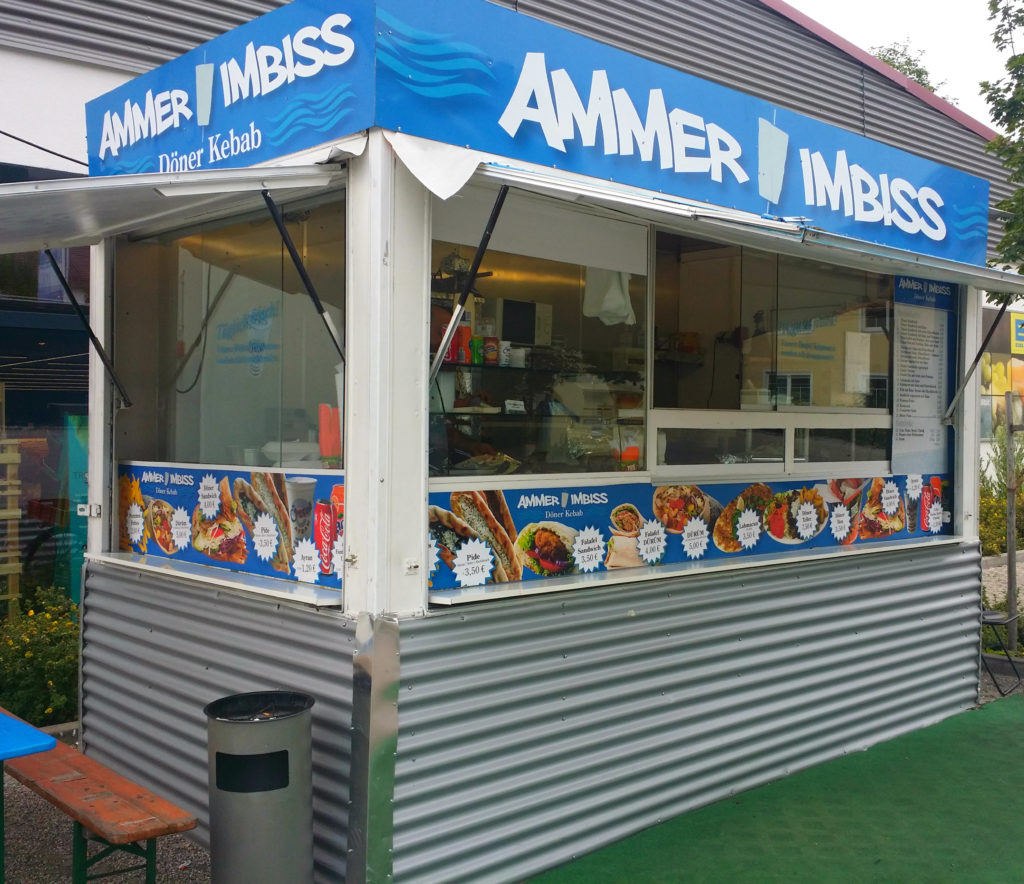 The best Turkish kebab we’ve eaten so far can be found in Weilheim. 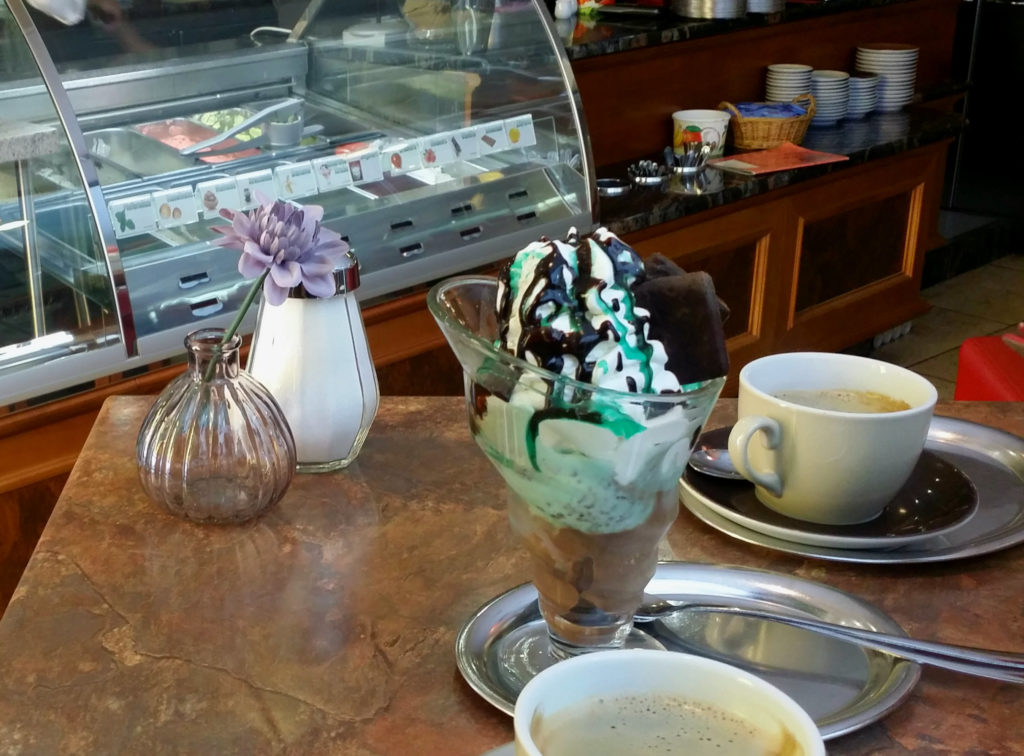 And good ice-cream. They had ice-cream spaghetti bolognese on their menu and it was quite popular among the smaller customers. 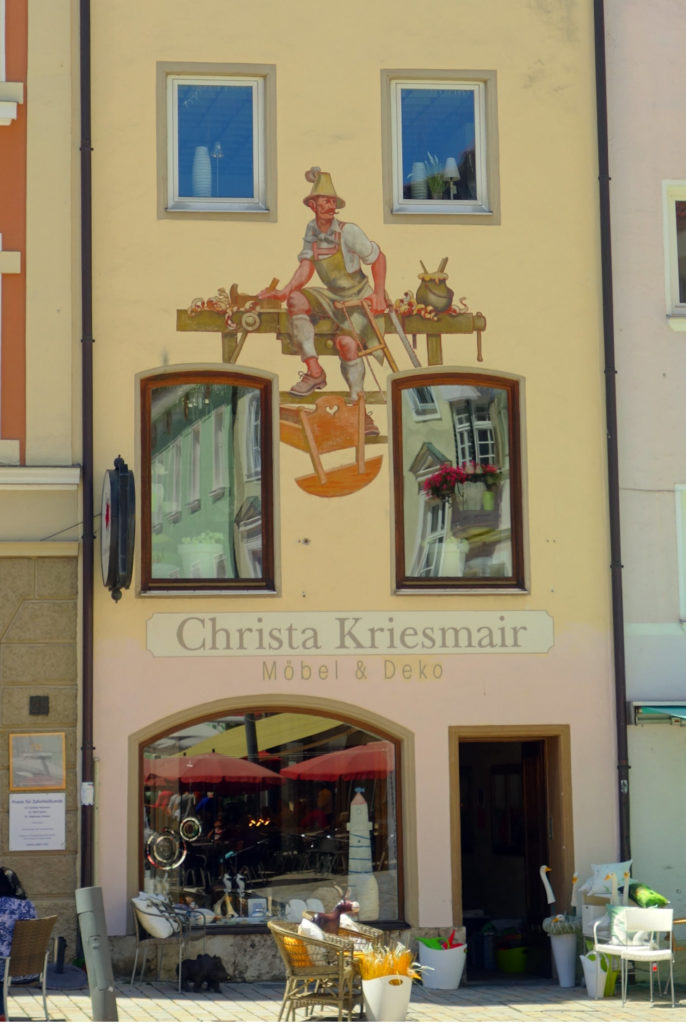 The graffiti is more like paintings here and it is a cozy town to spend a few days in. However, three days was enough for us and we started our journey to the north. 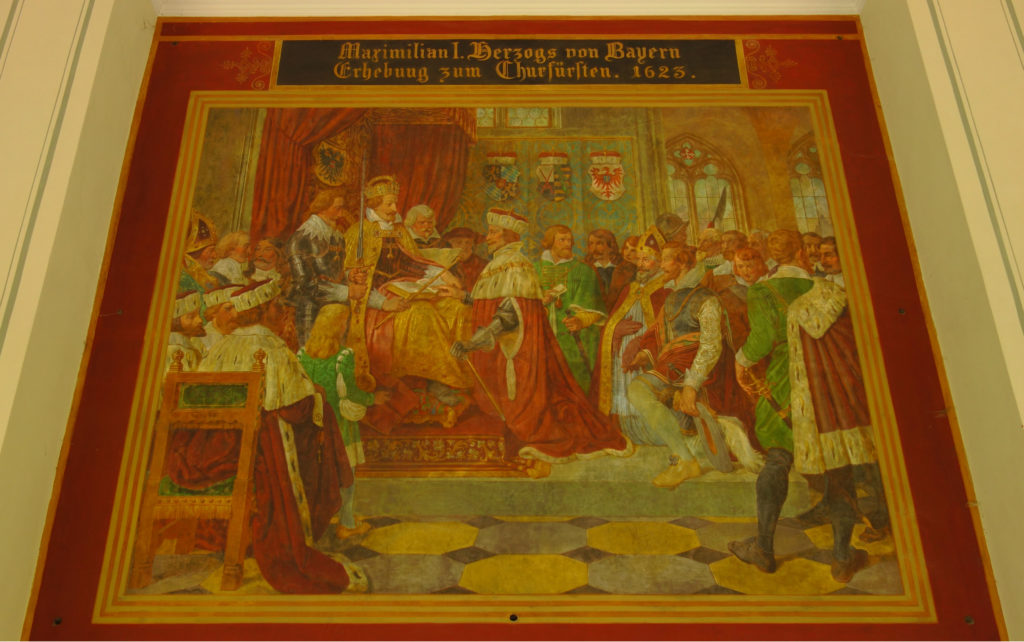 But first exploring the capital of the free state of Bayern – Munich. The first records of settlements in Bayern is from the formation of a duchy in the 6th century (AD). Then history has taken Bayern from a duchy, through the Roman Empire, to an independent kingdom and to a powerless state in the German federation that would like to become independent again. 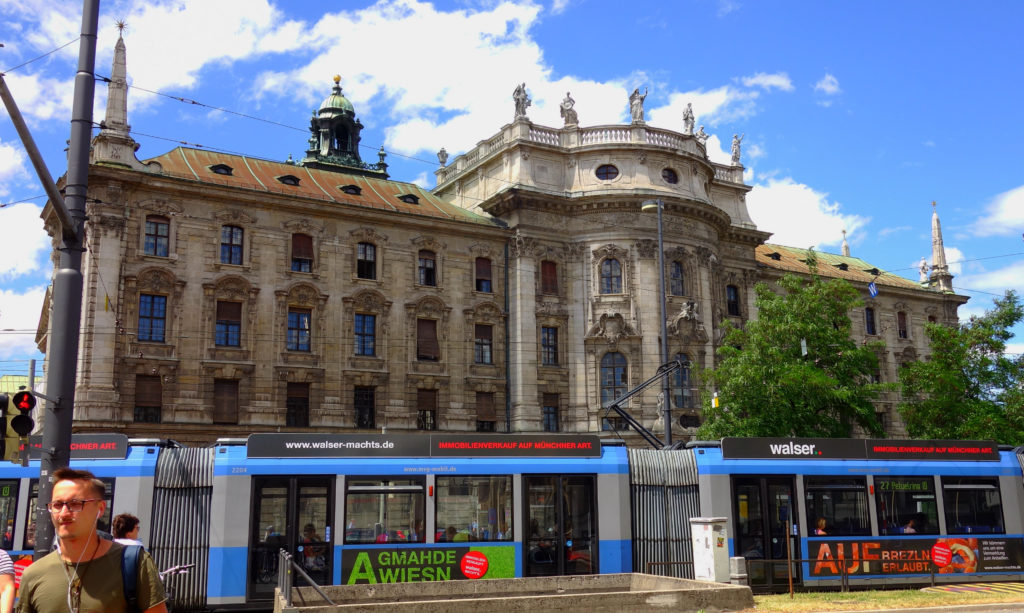 We had four hours in Munich so we just let google maps guide us to interesting stuff near the train station and we got to see amazing architecture and walk in to a nude beach in the middle of the city. But first buildings, and we’ve stuffed cool buildings in a slide show below. 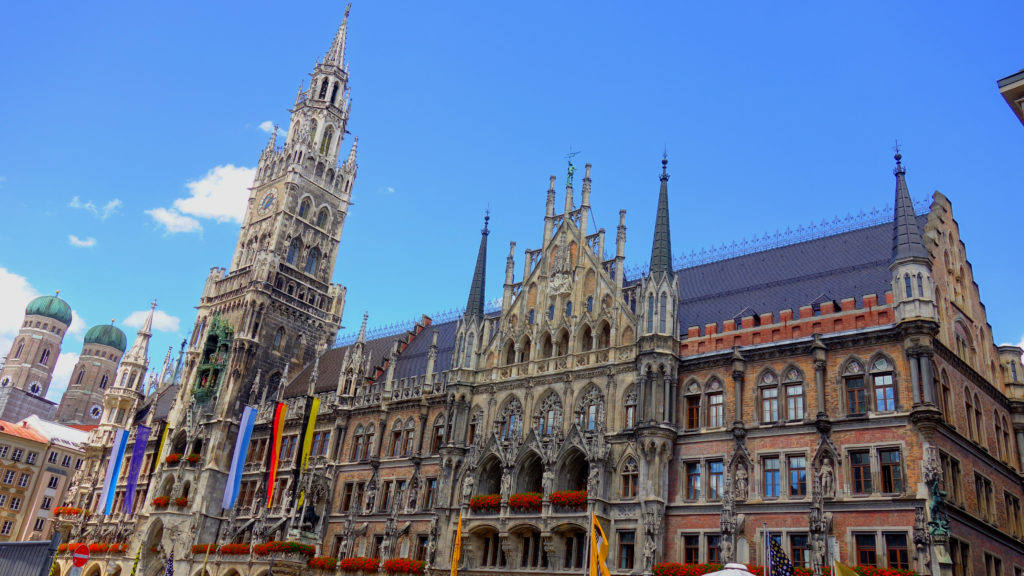 The New Town Hall is an impressive Gothic building at the Marienplatz in Munich. Fun fact about Marienplatz: The square was named after the Mariensäule, a Marian column erected in 1638 to celebrate the end of Swedish occupation. 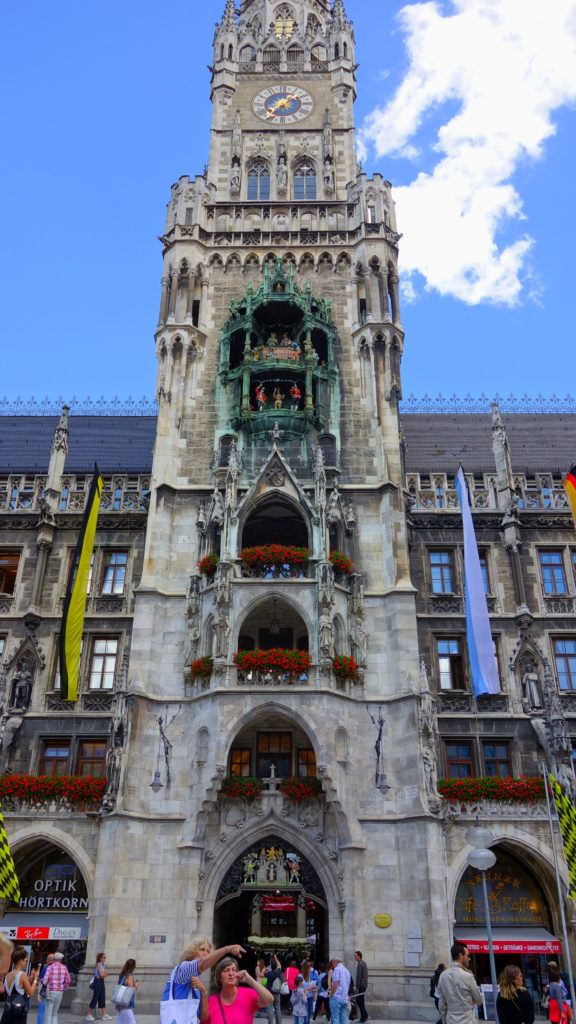 The New Hall opened its doors In 1874, because the local government had grown so big that they no longer could fit all the people in the old one. They choose a neo-gothic design in memory of the bourgeois high season during the Gothic period. Below is a video of the place. 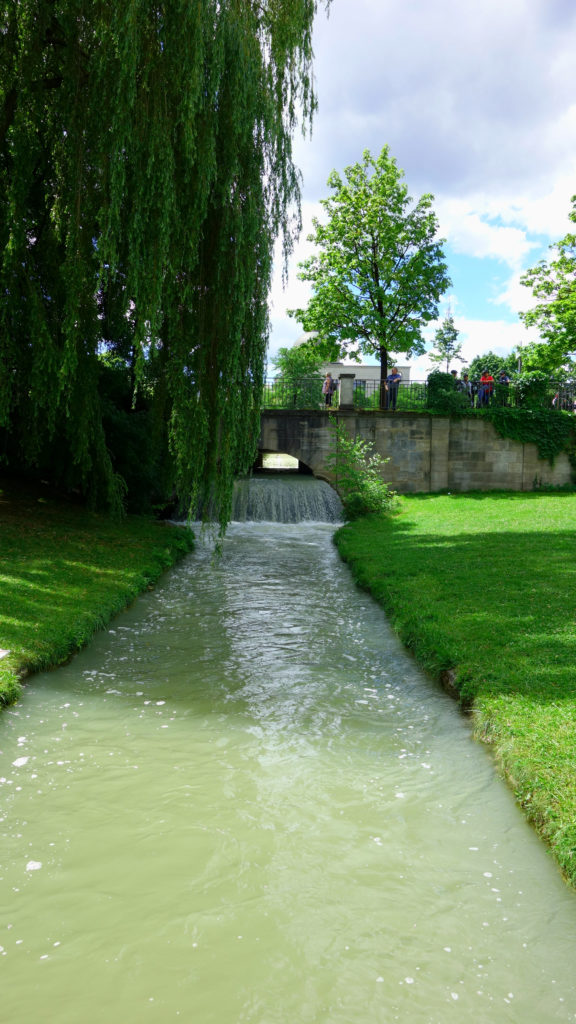 We visited the English garden, which is situated in the middle of the capital of Bayern. 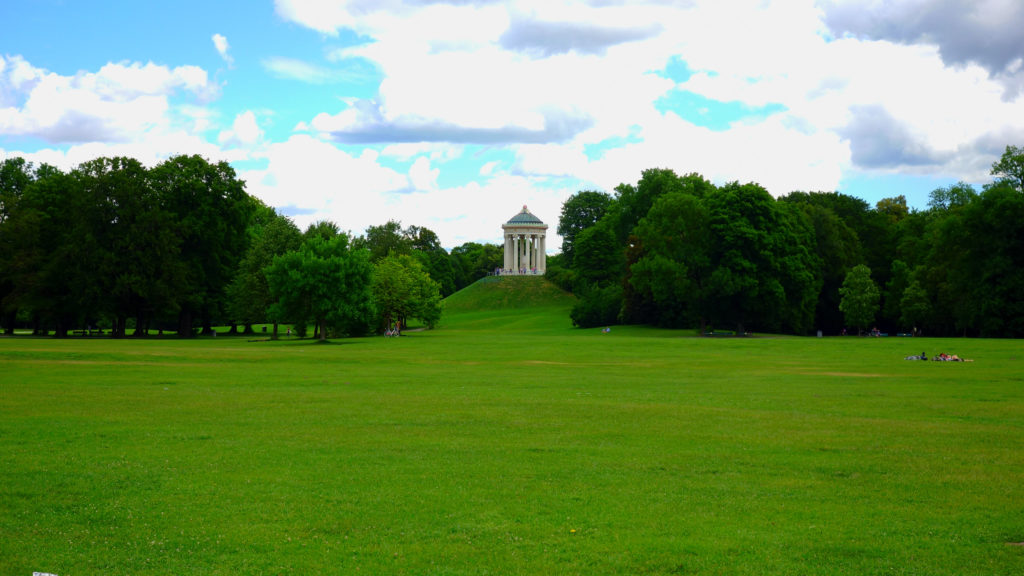 The English garden was created in 1789 by Sir Benjamin Thompson and later Count Rumford for Prince Charles Theodore, Elector of Bayern.
The English garden in Munich is counted as one of the largest urban public parks in the world. 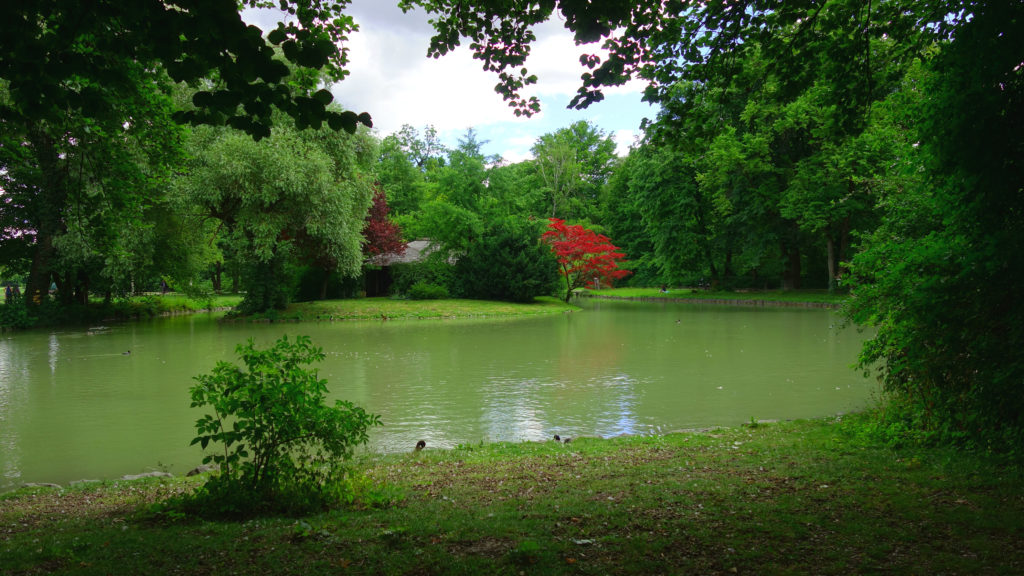 Its a huge park and our mission was to get to the Chinese tower in the middle of the park. 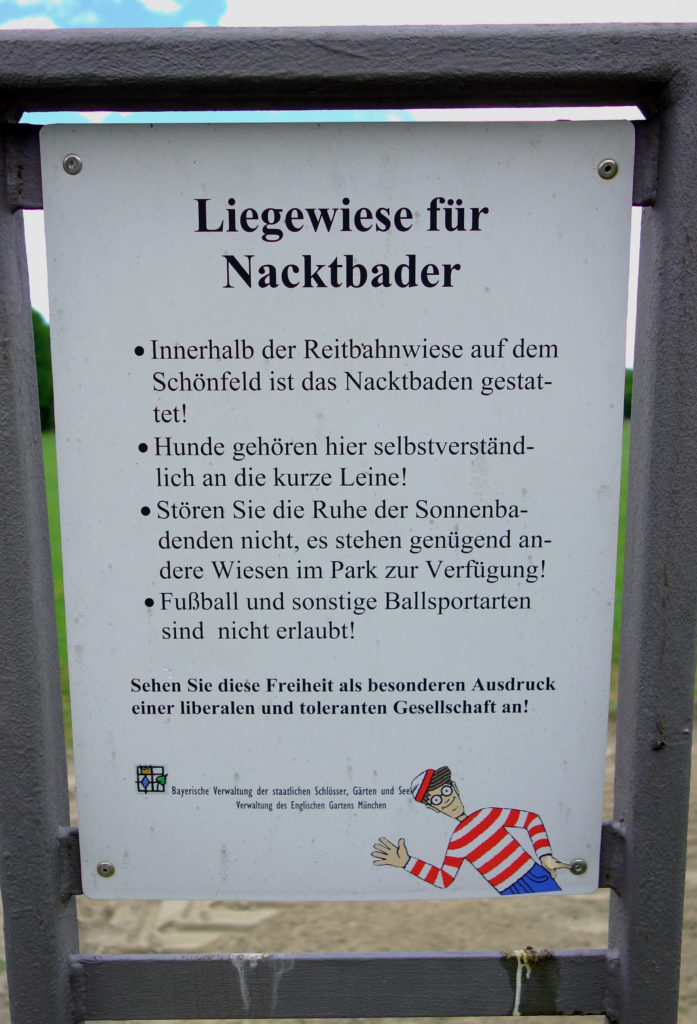 But keep your eyes open where you go. We accidentally walked right in to a nude beach and it took a few seconds for us to realize why we suddenly only saw naked people around us. 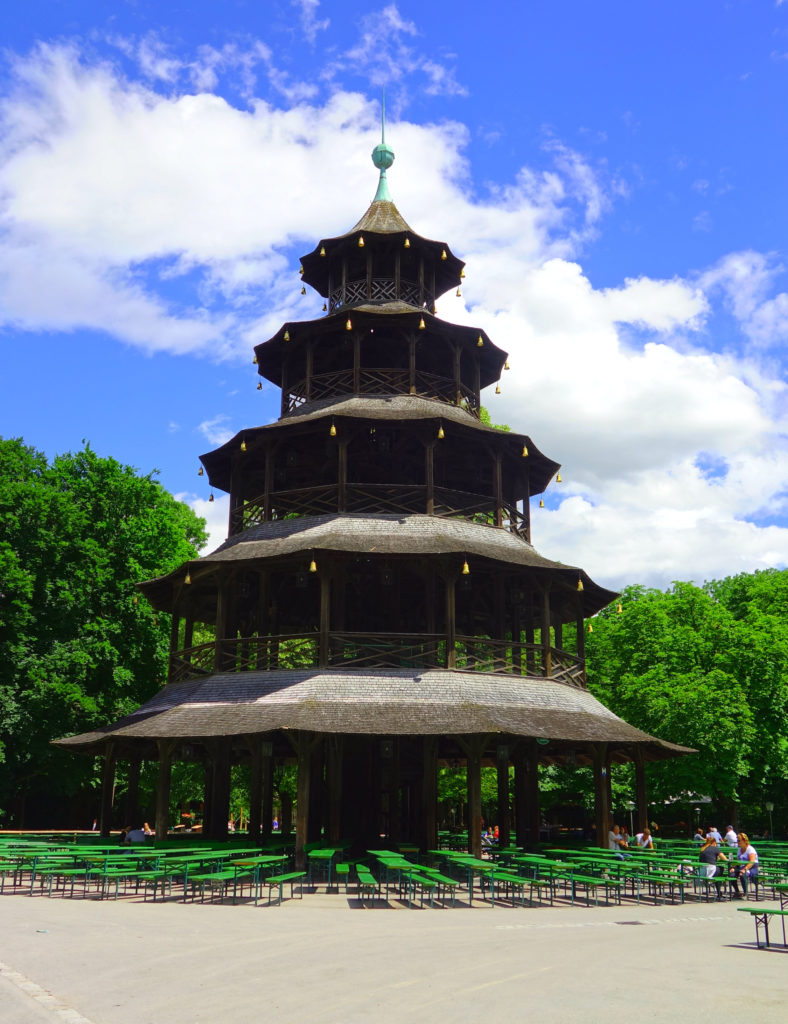 The Chinese tower. The original was built in 1790, but that was destroyed during the second world war. However, the community built an exact copy to replace the burnt down pieces after the war ended. 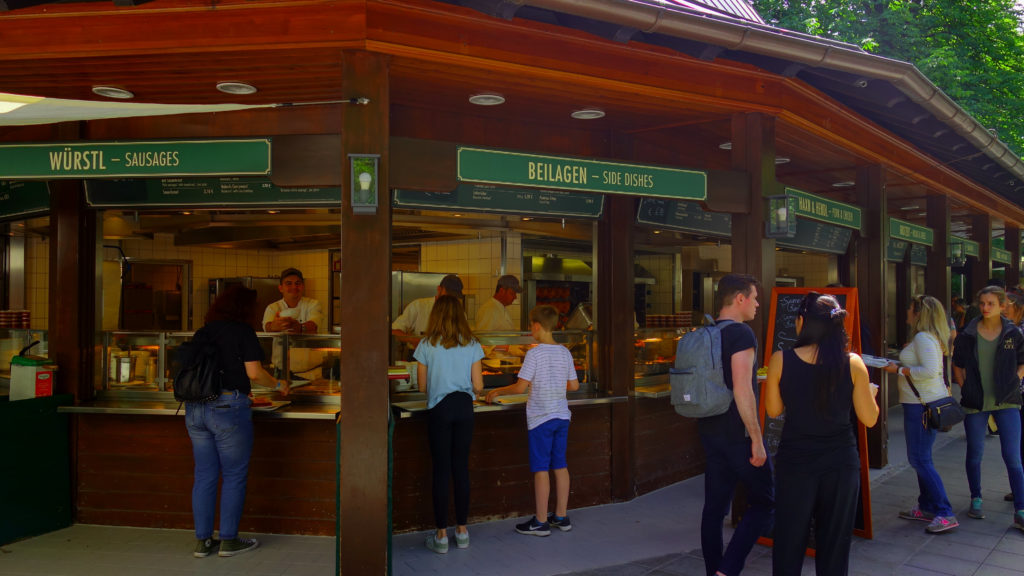 We took a break at the beer garden next to the tower and did what the locals do. 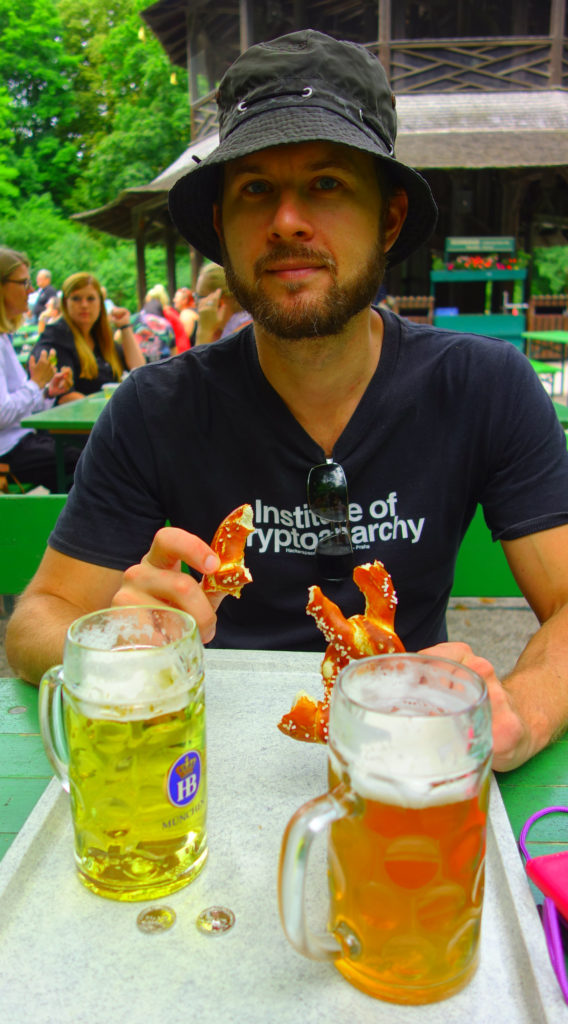 Eating pretzels and drinking a beer. 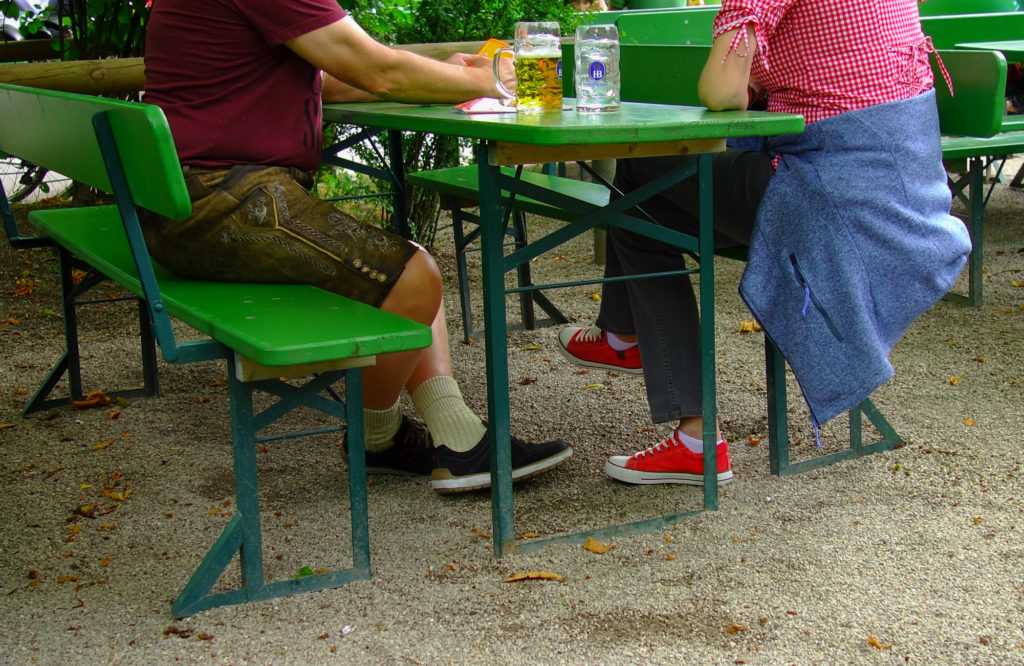 We saw a lot of men walking around in their lederhosen, so we had to take a sneak picture. 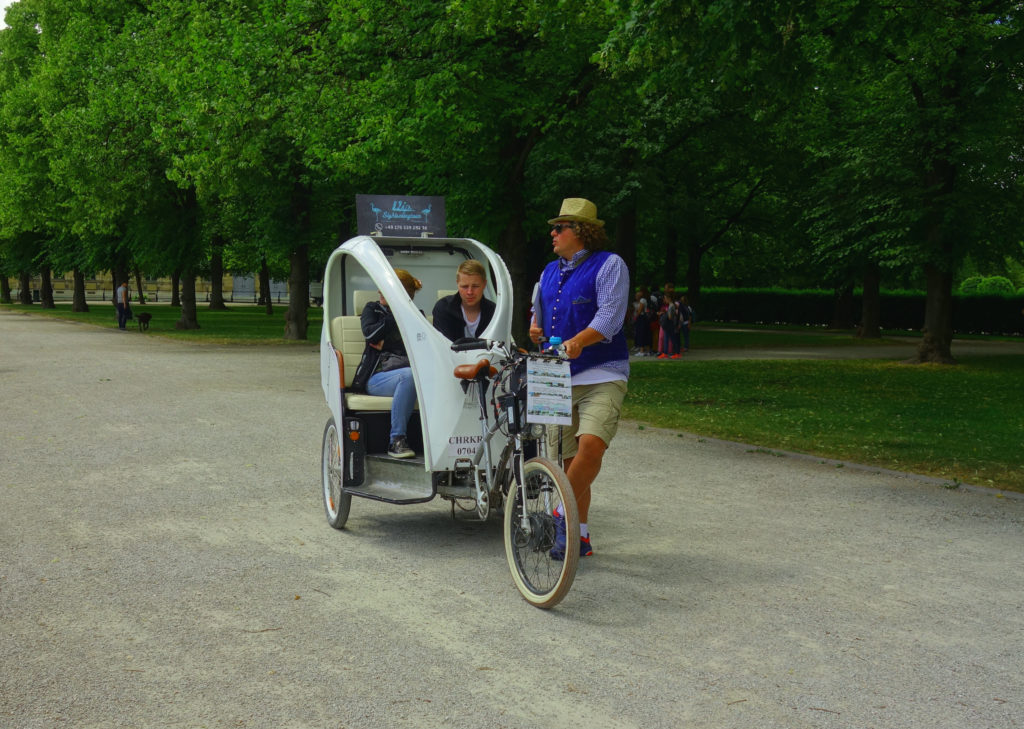 Munich, or Bayern was surprisingly cool to us. We didn’t have so high expectations beforehand of this place, so we were pleasantly surprised of how vibrant and interesting Munich felt. Next time we have to stay longer than four hours here and do more exploring. Look at this bicycle guide, don’t you just want to hop on one of those and let you be guided around Munich by them? 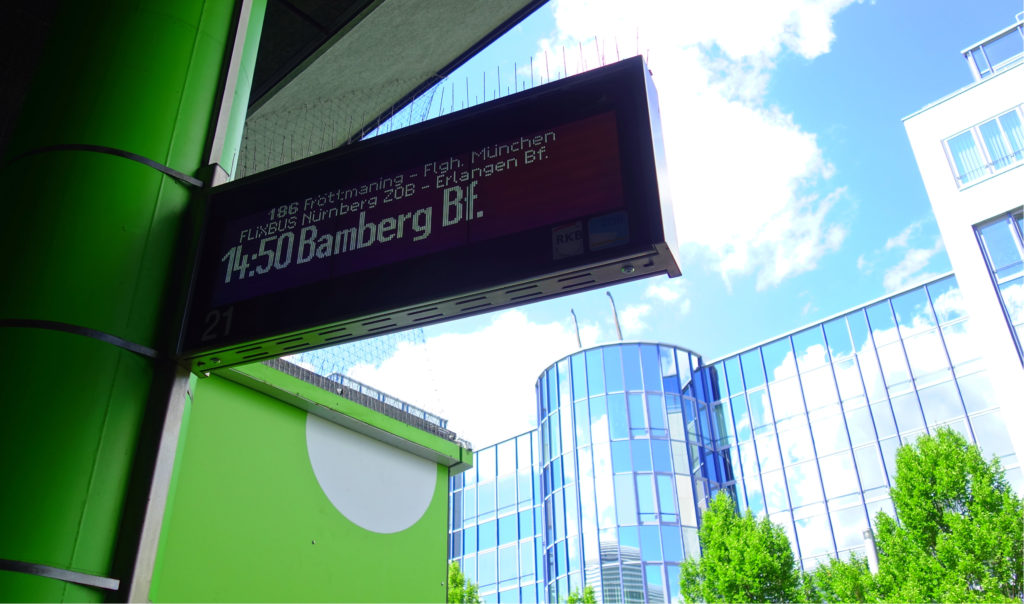 Our friend waited for us in Bamberg so we jumped on a Flixbus, our new favorite bus company in Europe – so cheap and easy to get around Europe when you use their service. We can highly recommend them 🙂