We would never have traveled to places like Graz or Dubrovnik, if it wasn’t for our friends  who live or have relocated to different parts of the world.  Graz and the surroundings are a lovely place to visit for a few days and it is even better when you can use your friends as local guides who can show you their favorite spots in the area. Thanks Sussi and Tobias for the days you showed us around in Graz and hope to see you again soon! 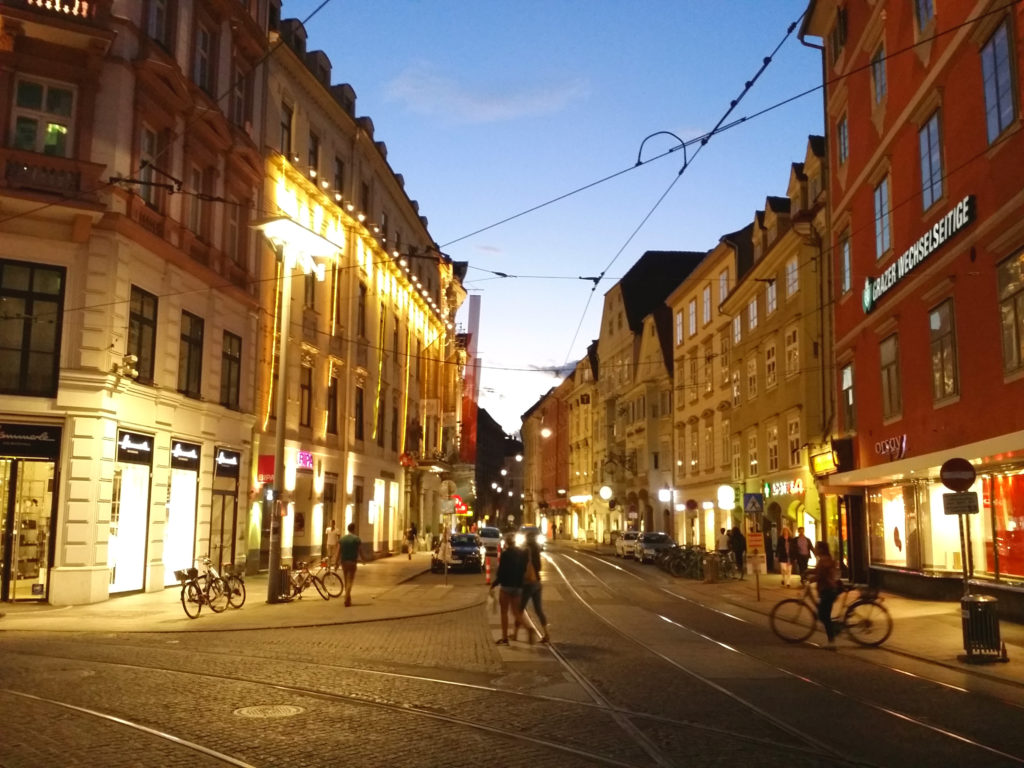 Graz during night, walking back to Sussi and Tobias place. 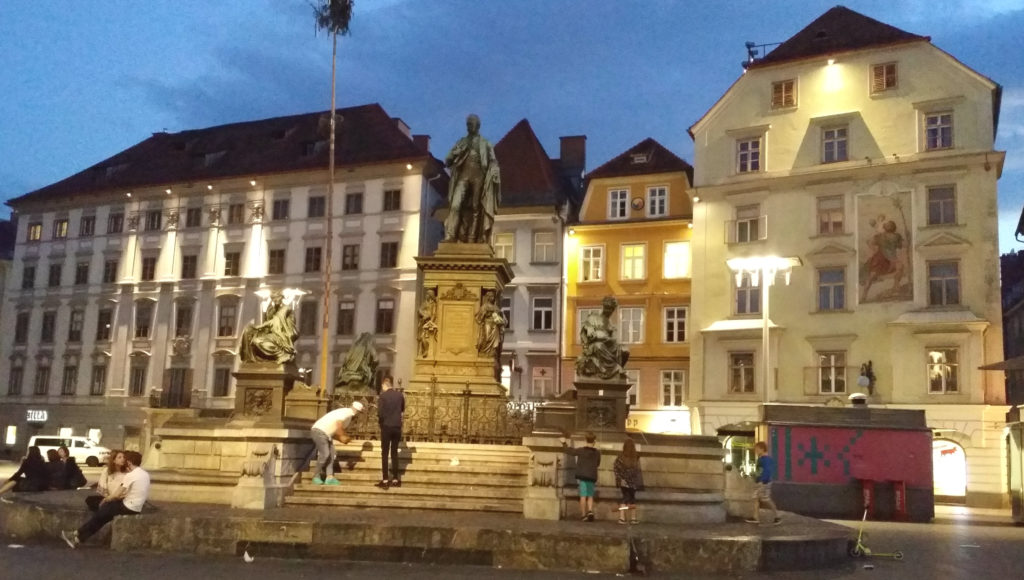 Graz is the second largest city i Austria and is also a university city with a lot of students. 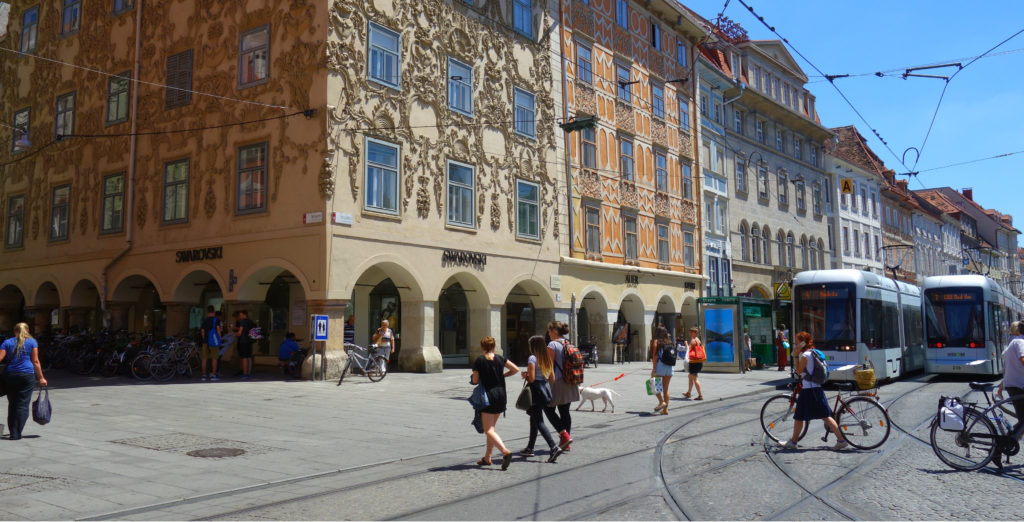 The city center when the sun is up. You’ll find really old-looking buildings around town. Graz was made into an important commercial and trade center during the 12th century by the Habsburgs and later, in the 16th, the architecture was influenced by the Italian Renaissance people, so that is why you have the interesting looking buildings here today. You also see and hear a lot of churches here: 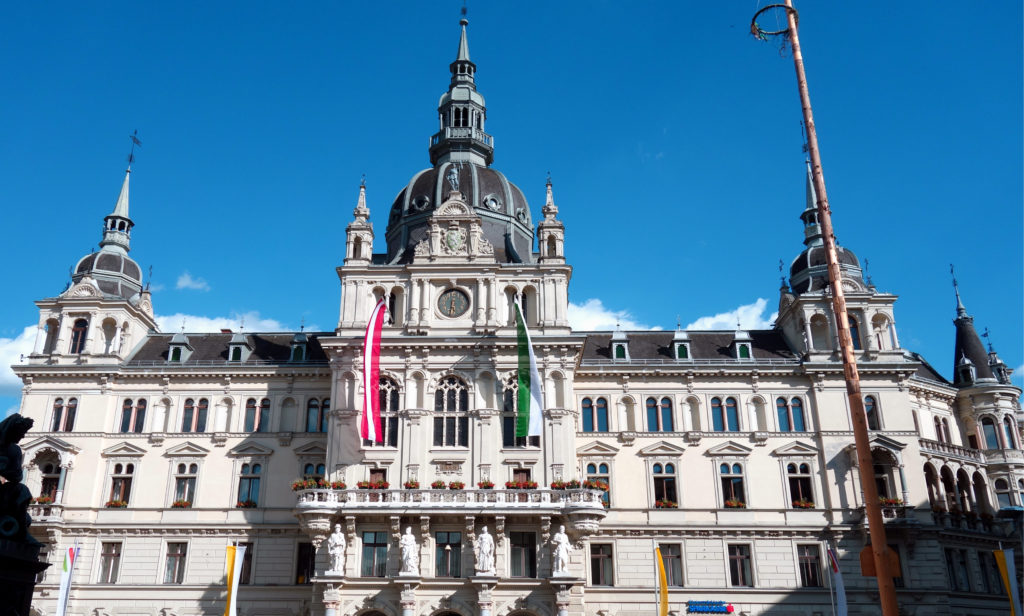 The impressive courthouse in Graz. 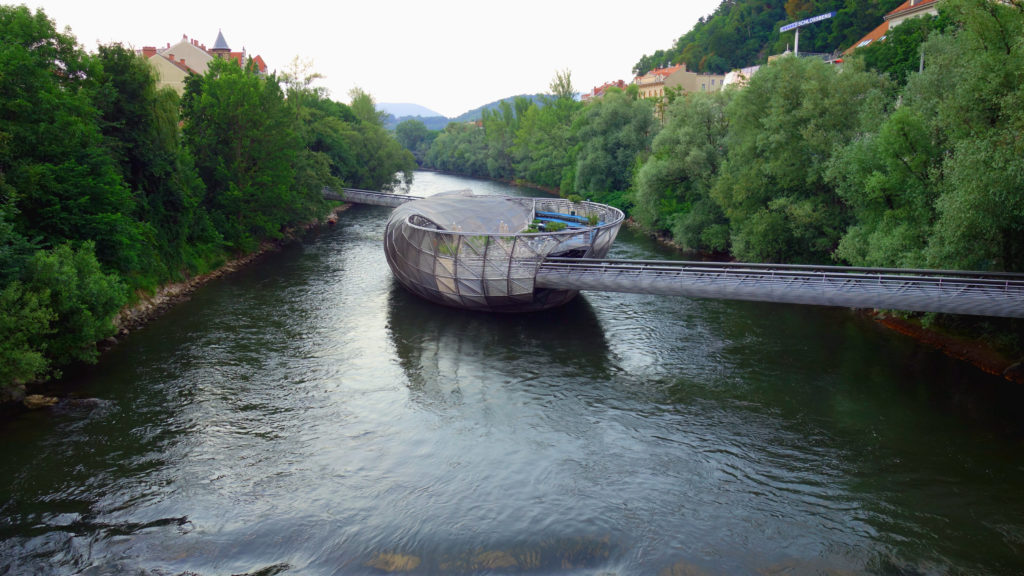 There are also a lot of futuristic buildings incorporated into the medieval look of the town. 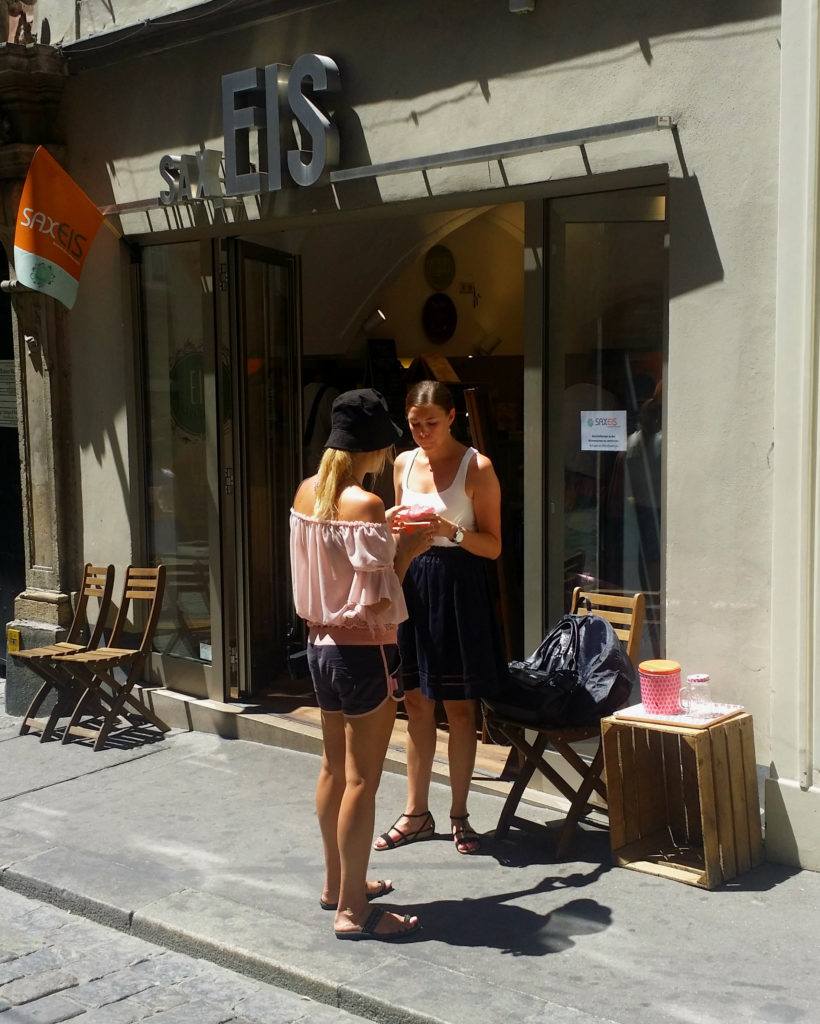 Sussi took us out on a walk through the center of Graz and our mission was to get up on Grazer Schloßberg or the castle mountain. Here we took an ice cream break 🙂 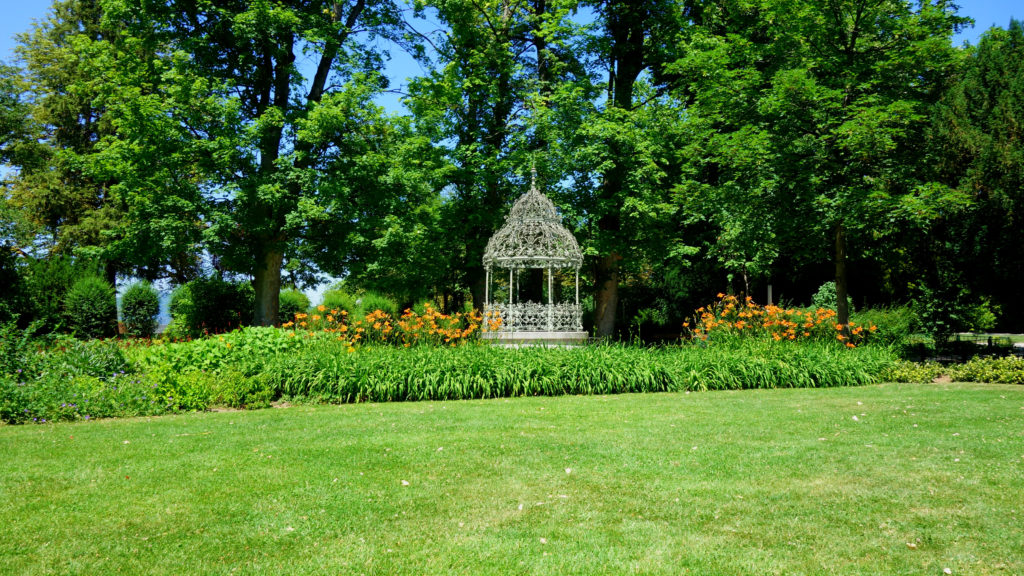 There is a small garden on top of Grazer Schloßberg, but you’ll mostly get up here to see Uhrturm, or the clocktower, and the view over old town Graz. 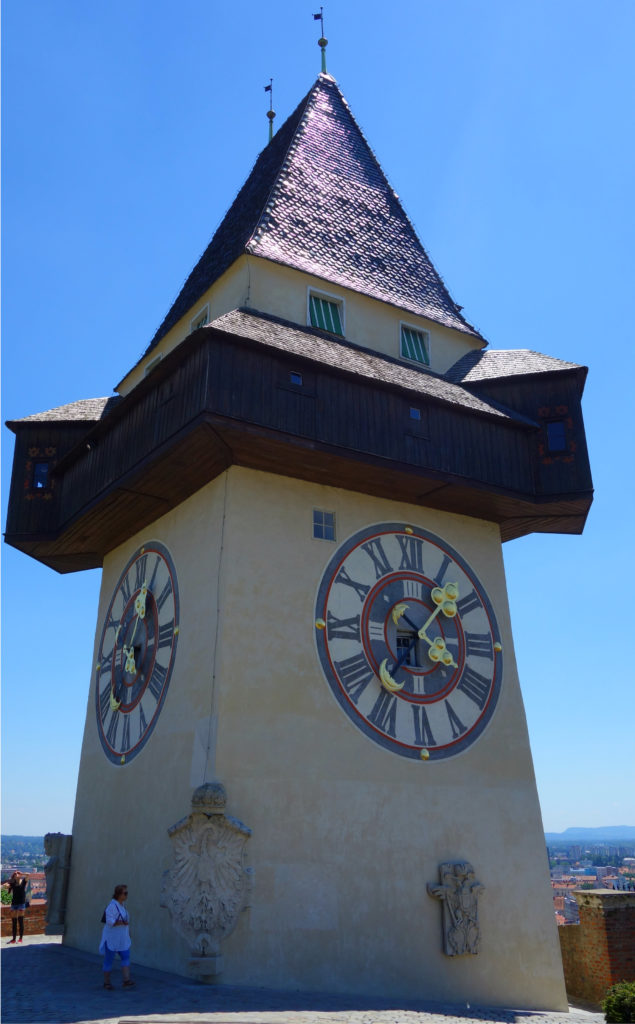 Uhrturm has an interesting feature, the clock’s pointers have opposite roles compared to ordinary clocks, with the larger pointer showing hours while the smaller pointer shows minutes. 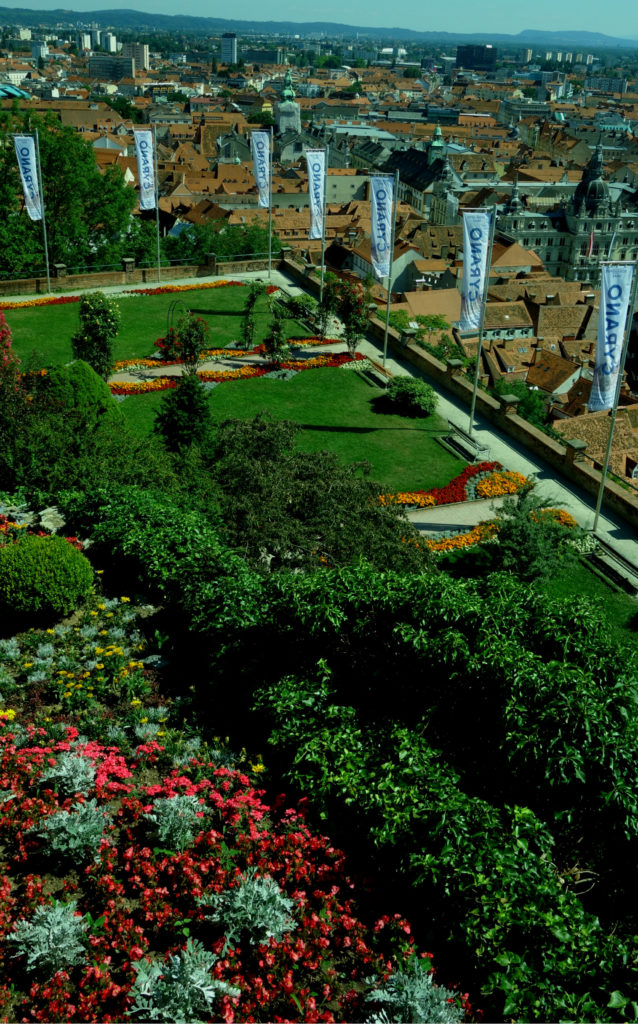 The park just beneath the Uhrturm. 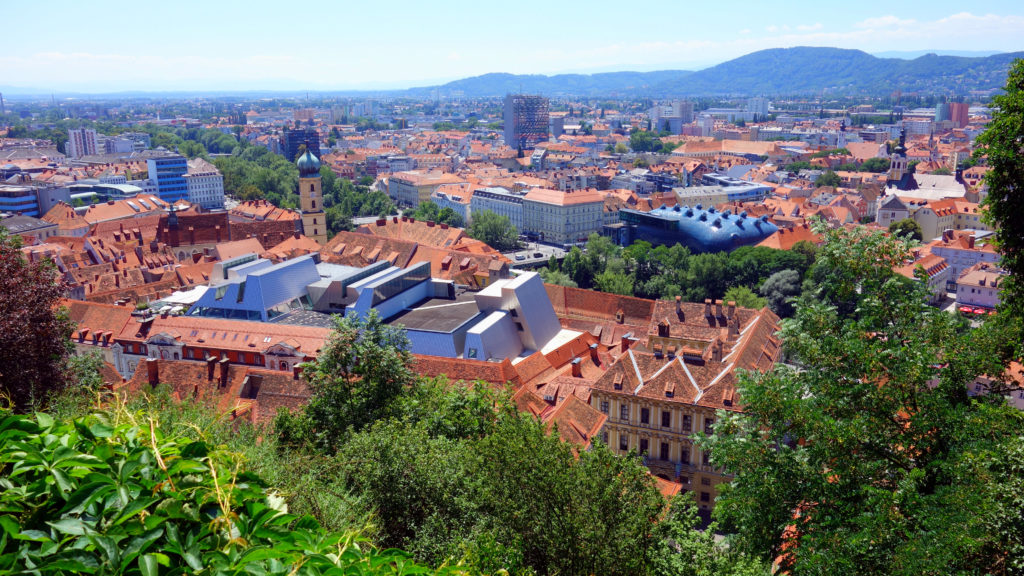 The view from Grazer Schloßberg is amazing and you can see the mixture of buildings. Notice the large alien slug-like building to the right. It is the Kunsthaus, the museum of modern art, and we heard that the building itself is more interesting than what is displayed inside. 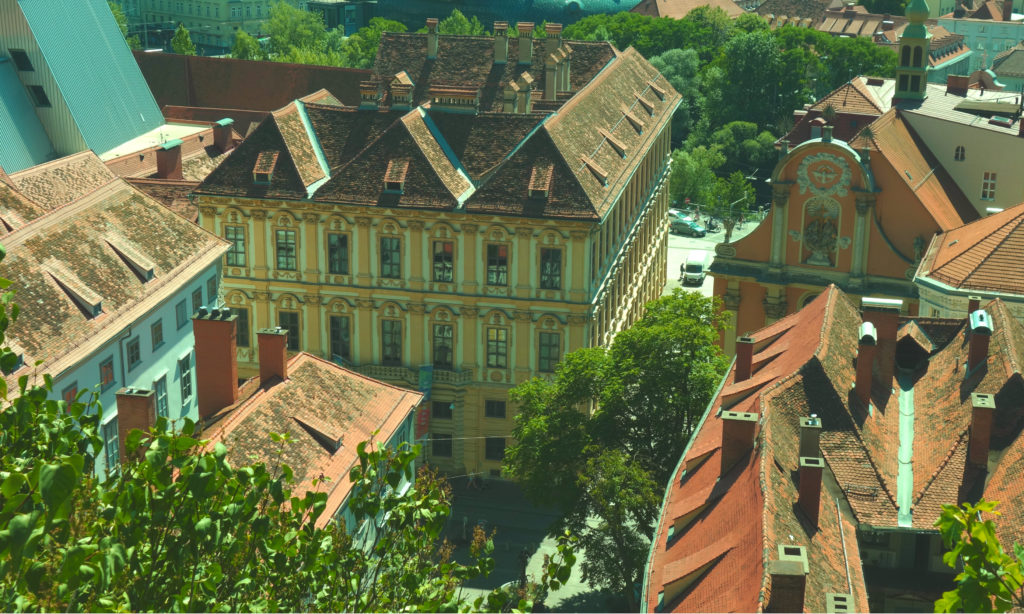 This is the view if you’re talking the stairs back down to the city center. The other option is to take the elevator. There are tunnels under Schloßberg that was created during the second world war to protect the people of Graz from airplane bombings. Some parts of the tunnel system is still accessible today and that’s where you’ll find the Schloßberg elevator. 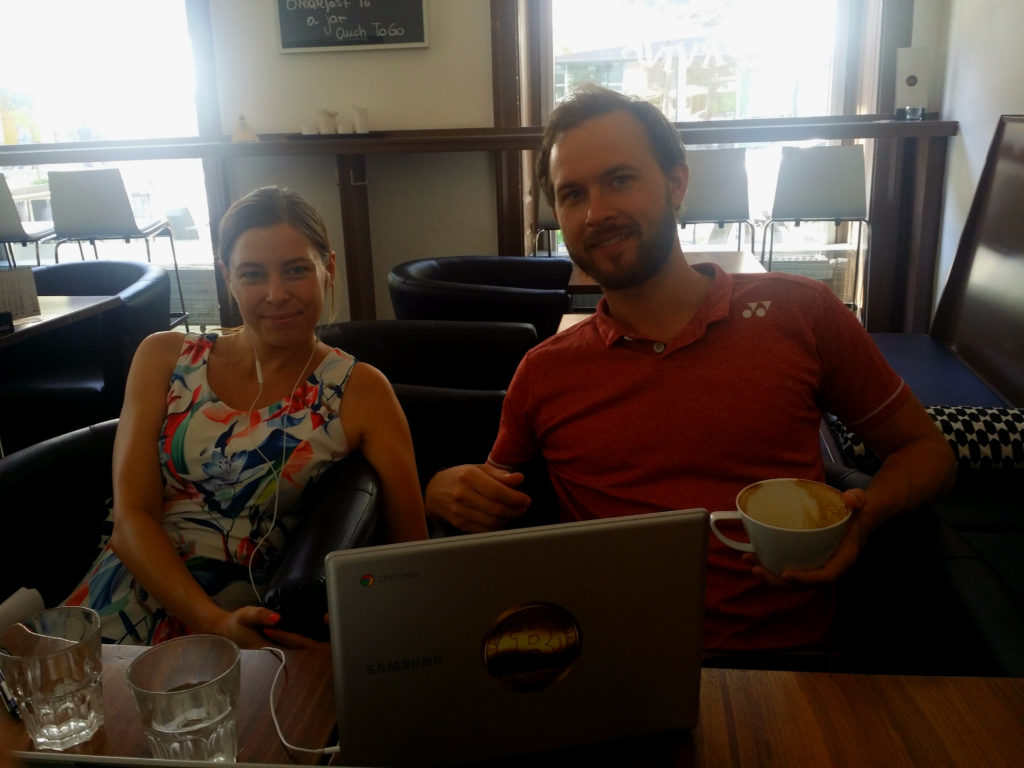 We also had time to try out Sussi and Tobias favorite neighborhood cafe, and Pontus had time to describe Bitcoin for Sussi. 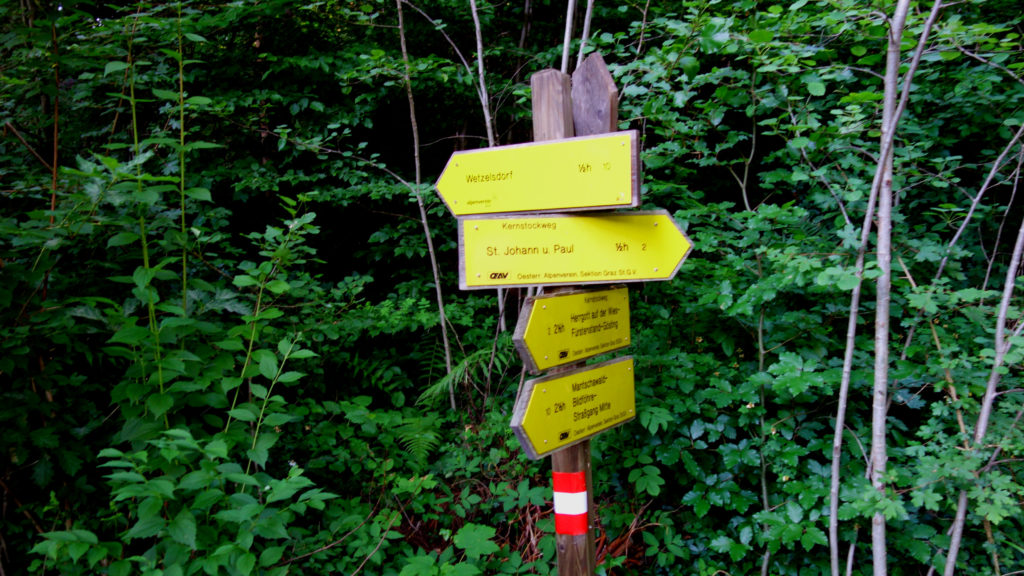 Austrians love hiking, so Sussi and Tobias took us out hiking around the small mountains surrounding Graz. It is really easy to hike in Graz, just follow the signs and the read/white markings. 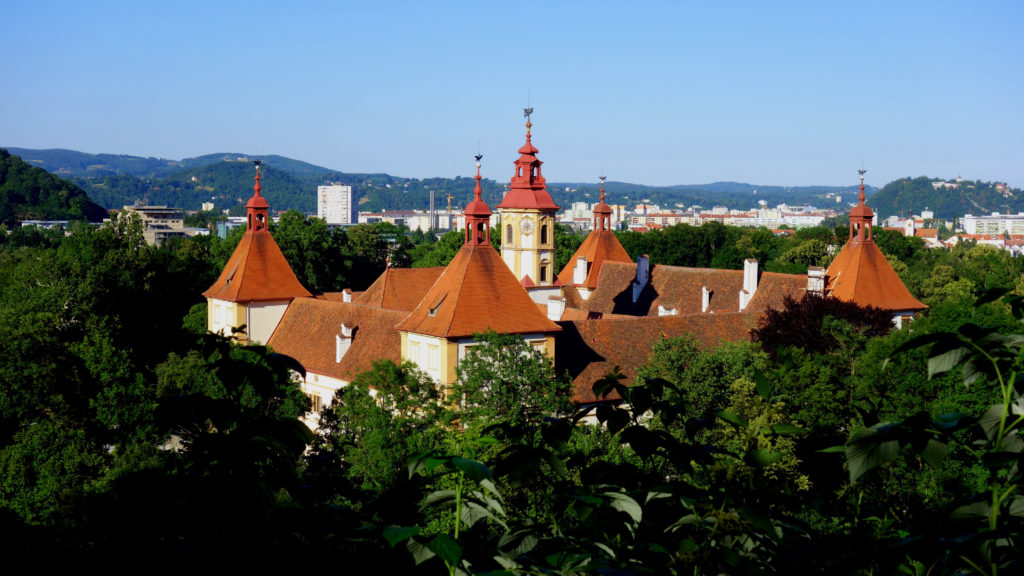 We got a lovely view over Eggenberg castle, a castle built in Baroque style. The oldest parts of the castle date back to the 1460, but the more modern parts are from around 1625. Below you’ll find a video with the view over Graz from our day hiking the surroundings. 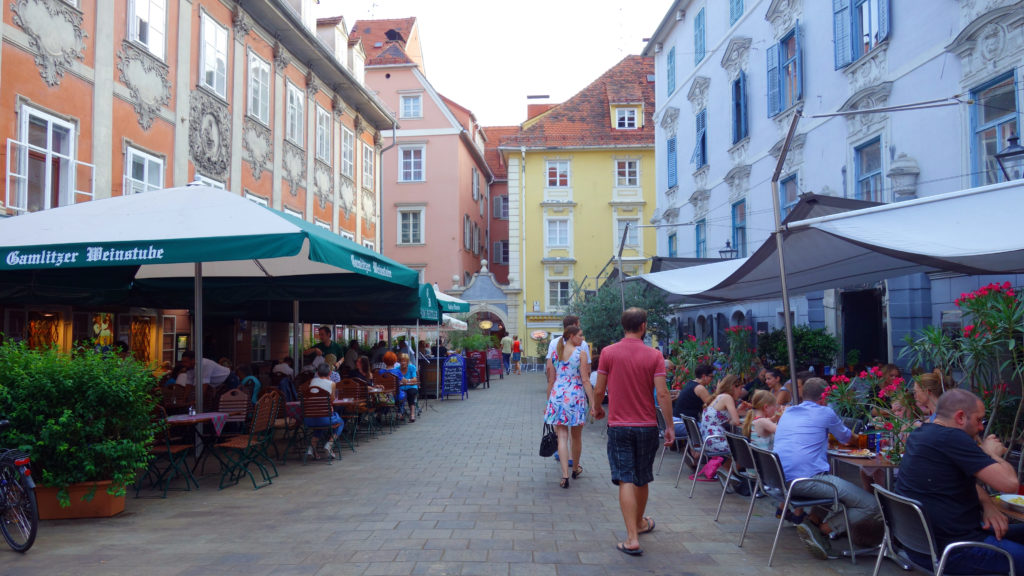 Sussi and Tobias took good care of us and showed us their favorite restaurants in town. 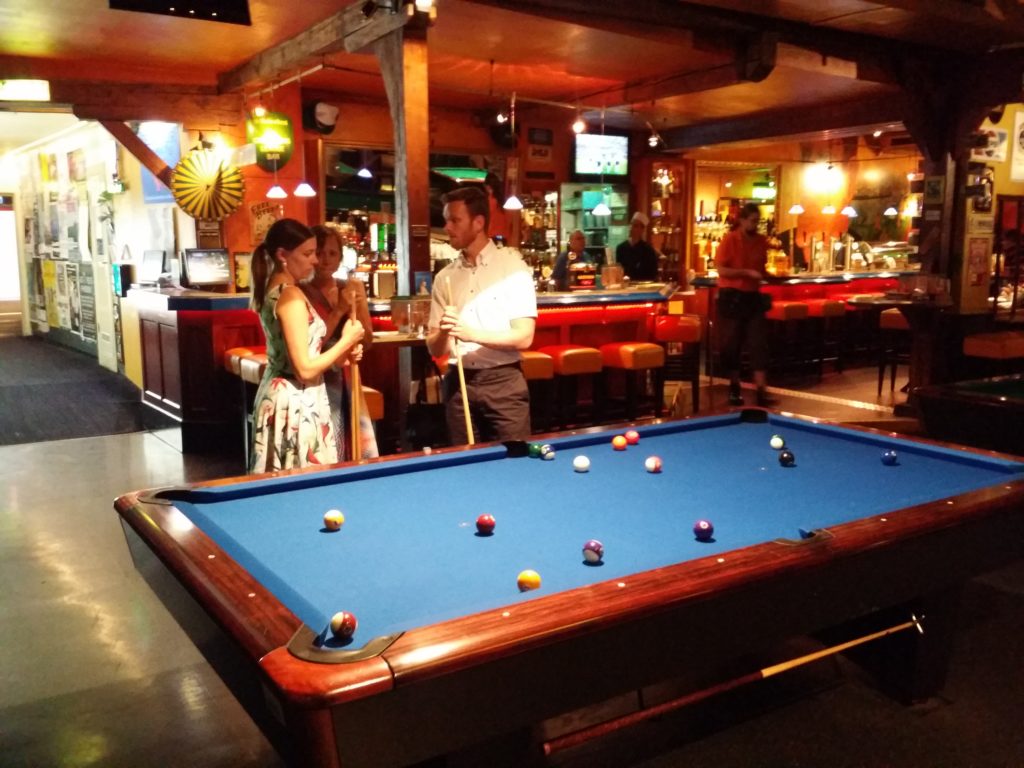 The last evening we played some billiards, here team Assander are discussing their strategy. 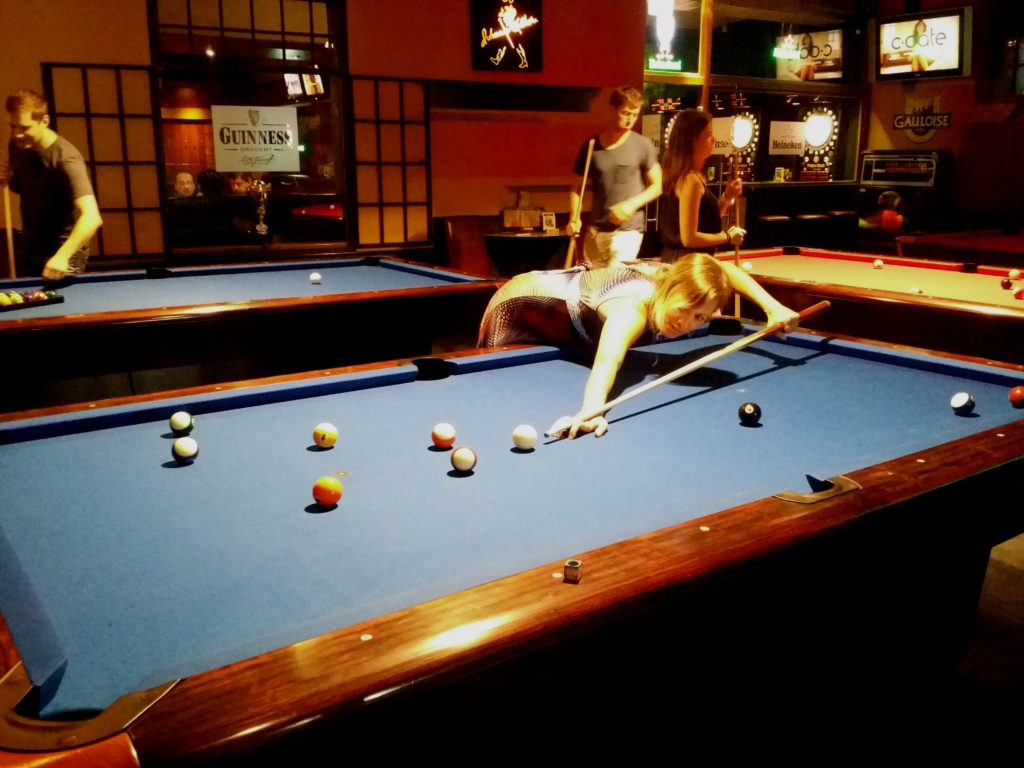 Ulrika is aiming carefully. Thanks Sussi and Tobias for a nice couple of days in Graz. We’ll have a rematch soon somewhere in Europe 🙂 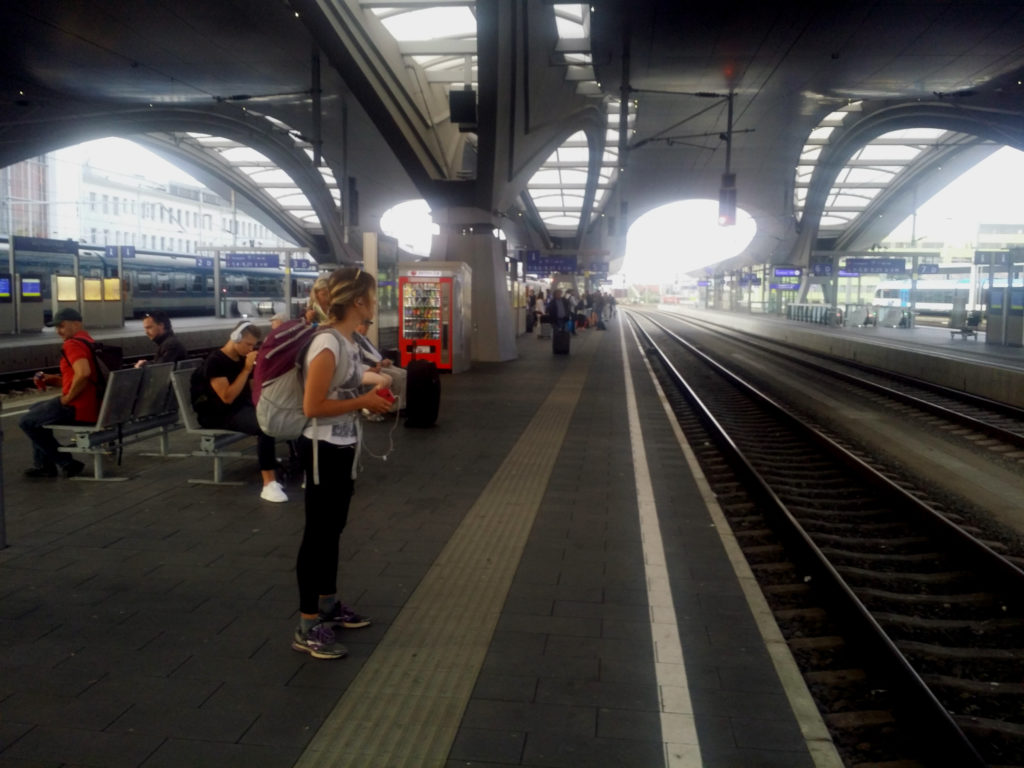 Early the morning after we said goodbye to Sussi and Tobias, taking the train to a part of Austria only accessible from Germany.